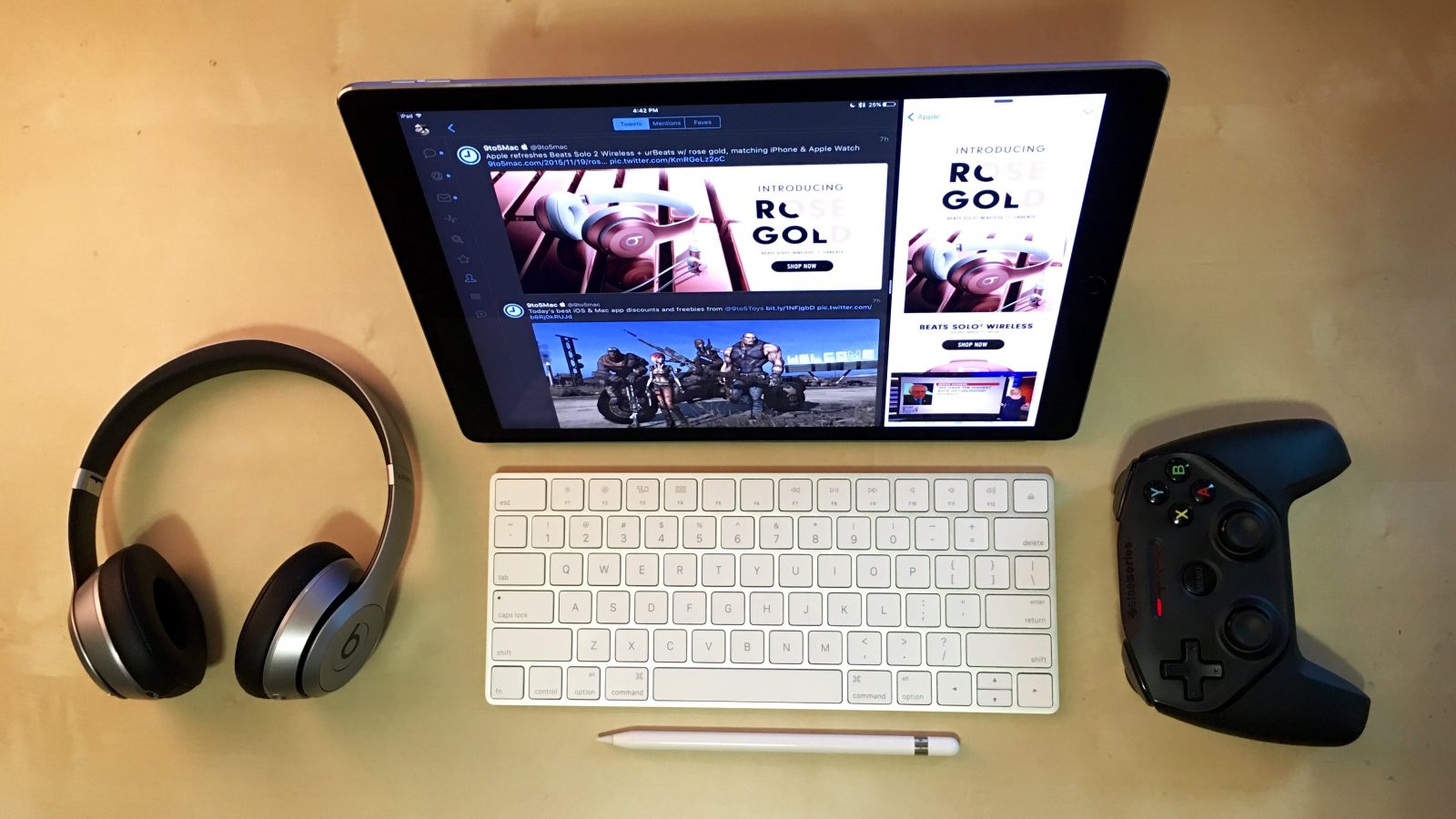 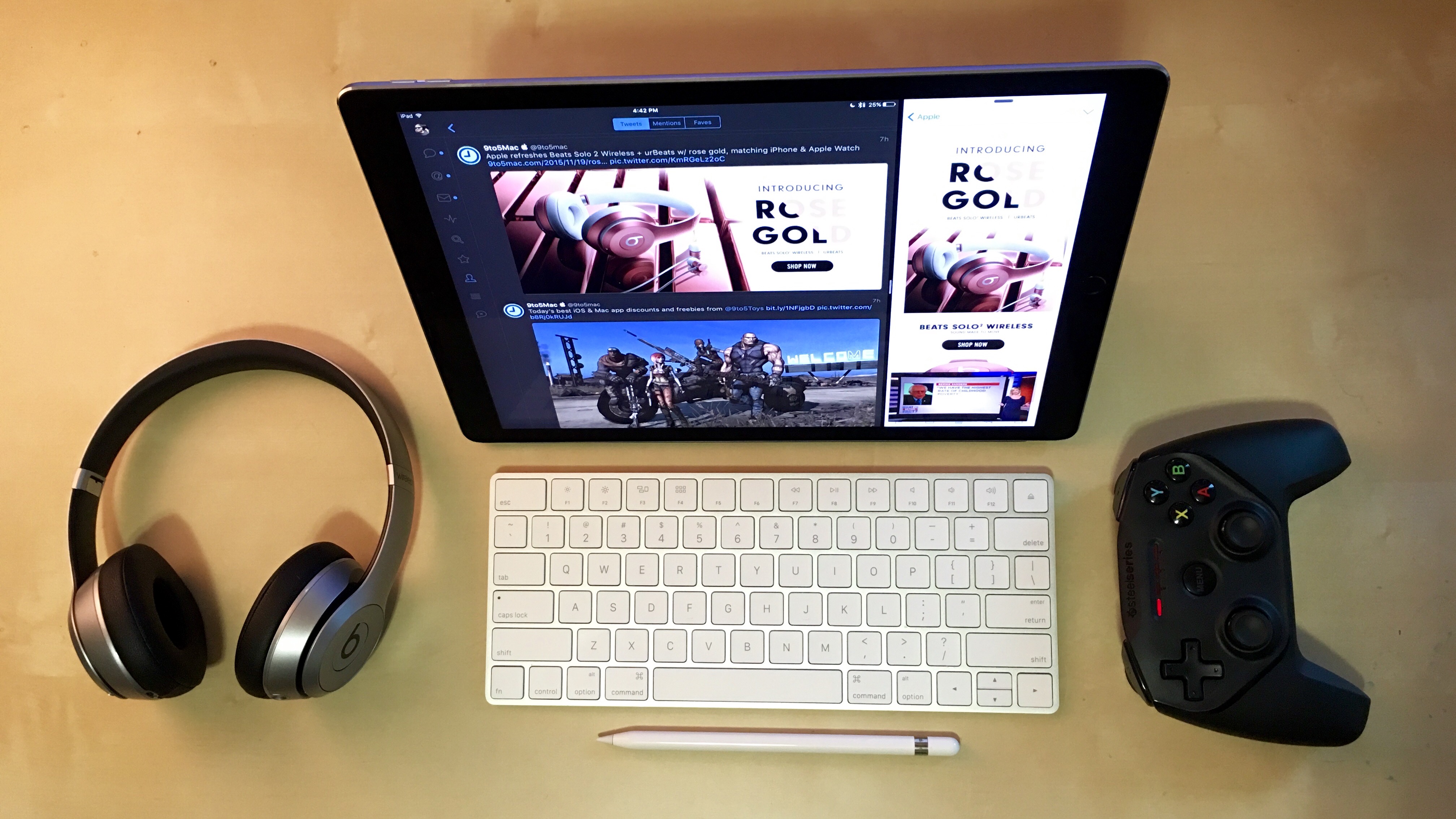 Welcome to our iPad Holiday Gift Guide! There’s currently a lot of excitement around the world of iPad, and rightfully so.

On the software side, Apple injected new life into prior models by adding side-by-side apps and picture-in-picture video with iOS 9. In hardware, the smaller 7.9″ iPad mini family got major speed and notable display quality improvements with the iPad mini 4, while brand new 9.7″ iPad Air 2’s are being sold at prices lower than minis, and a completely new class of iPad debuted in the just-launched 12.9″ iPad Pro.

There are essential accessories in all price ranges for every iPad regardless of which size you’re addressing, and we’ve tested a lot of products over the years. Read on and please share our iPad Holiday Gift Guide so you and your loved ones can buy the best iPad accessories for the holidays.

iPads on their own are totally immersive: high-resolution touch screens that we can hold in our hands to see the web, ebooks, friends and family over FaceTime calls, movies and TV shows up close, and so much more. But unlike MacBooks, out-of-the-box iPads leave their screens exposed to the elements, don’t stand up on their own, and likely travel a lot more places than just between the home and office. For those reasons, nearly all iPad owners will want something to cover the screen when not in use, protect the back and sides to prevent scratches and screen shatters and improve grip, and perhaps most importantly, something that lets iPad stand upright on a flat surface.

Apple’s Smart Covers ($39 mini/$39 Air 2/$59 Pro) have served me well over the years and add minimal weight to iPads while covering the screen when not in use, folding back to stand iPads up in landscape for watching movies or making FaceTime calls, and slightly inclining flat iPads for comfortable desk typing with the on-screen keyboard. Apple also offers Silicone Cases that cover the backs of the iPad mini 4 ($59) and iPad Pro ($79), and Smart Cases for iPad Air and Air 2 ($79) that cover the front and back. But better options exist if you’re looking to go beyond a basic Smart Cover or overly grippy silicone case. 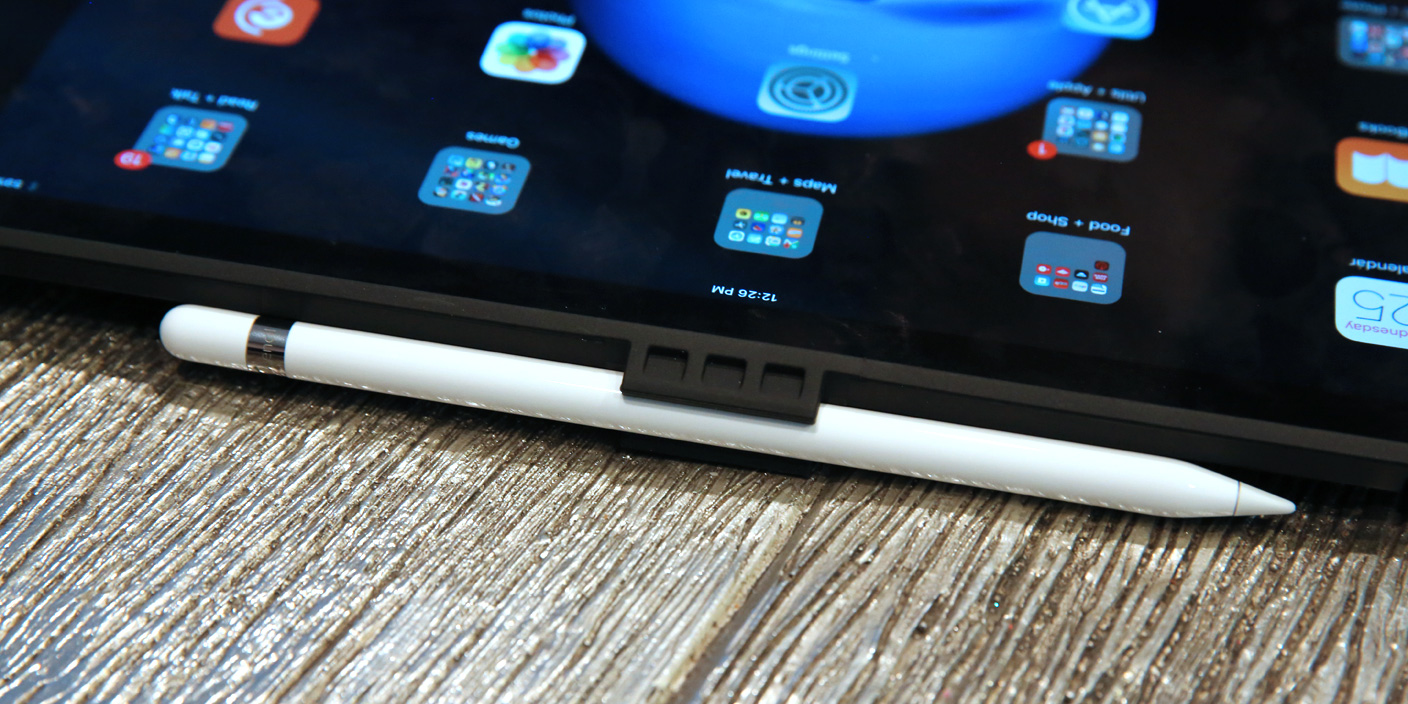 iPad Pro owners with Apple Pencil will appreciate Urban Armor Gear’s Composite Case ($80), which stands iPad Pro up at multiple angles, offers military-grade drop protection, and features an Apple Pencil holder. ZeroChroma’s Folio Slide Case ($35-$60) for iPad Air and Air 2 is a staff favorite thanks to its light shock-protective TPU body, removable slide lid cover, and rotating kickstand for landscape and portrait modes. A smaller version for iPad mini ($49.50) is also available. Also a staff favorite, the well-designed Just Mobile Encore stand ($50) will hold your iPad mini, Air, or Pro caseless or cased in landscape or portrait and comes in silver or gold. 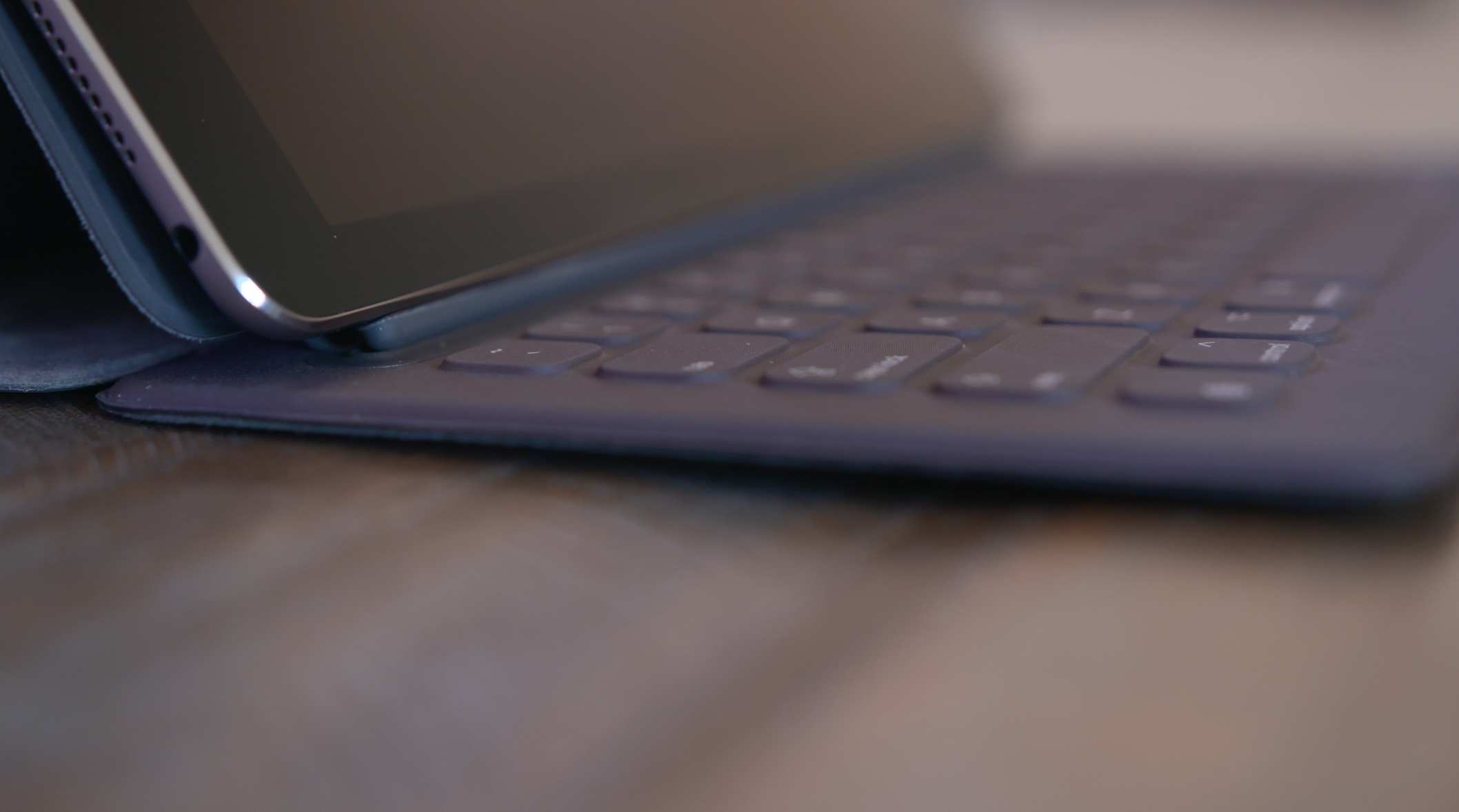 The iPad Pro also received a new cover plus keyboard from Apple, the hard-to-find Smart Keyboard ($169). It uses iPad Pro’s new Smart Connector for power and connectivity, so there’s no charging or Bluetooth pairing to fiddle with, but the premium price may be a turn-off to iPad users looking for more substantial protection or more functional keys. Logitech’s Create for iPad Pro ($150, reviewed here) offers front and back protection, backlit keys with more functions, and uses the same Smart Connector, but won’t appeal to iPad users not wanting to closely replicate the feel of a laptop computer.

Many iPad users prefer not to have a physical keyboard attached to their case or cover, and instead master the software keyboard for text input most of the time. Bluetooth keyboards that can also be paired with Macs and 2nd/3rd-gen Apple TVs may be better options for these iPad users. Apple’s new Magic Keyboard ($94, reg. $99) features a rechargeable battery and charges with Lightning, the same cable that charges iPads, but lacks backlit keys and easy switching between devices. Logitech’s Easy-Switch K811 ($74.99, reg. $99) similarly features a rechargeable battery but uses micro-USB like most Beats products and Android devices, although it’s backlit, has a Home button for iOS devices, and can pair with up to three devices including Macs, iPads, and older Apple TVs with fast switching between each.

Other options include the lightweight Logitech Keys-To-Go for iPad ($51.99, reg.$69.99) which connects wirelessly over Bluetooth, or Belkin’s Wired Lightning Keyboard with Stand ($54.99, reg. $69.99) which trades batteries for wired connectivity but only works with iPads and not Macs. Regardless of which hardware keyboard or keyboard case you pick, I recommend bookmarking and sharing my iPad keyboard shortcut cheat sheet for iOS 9. 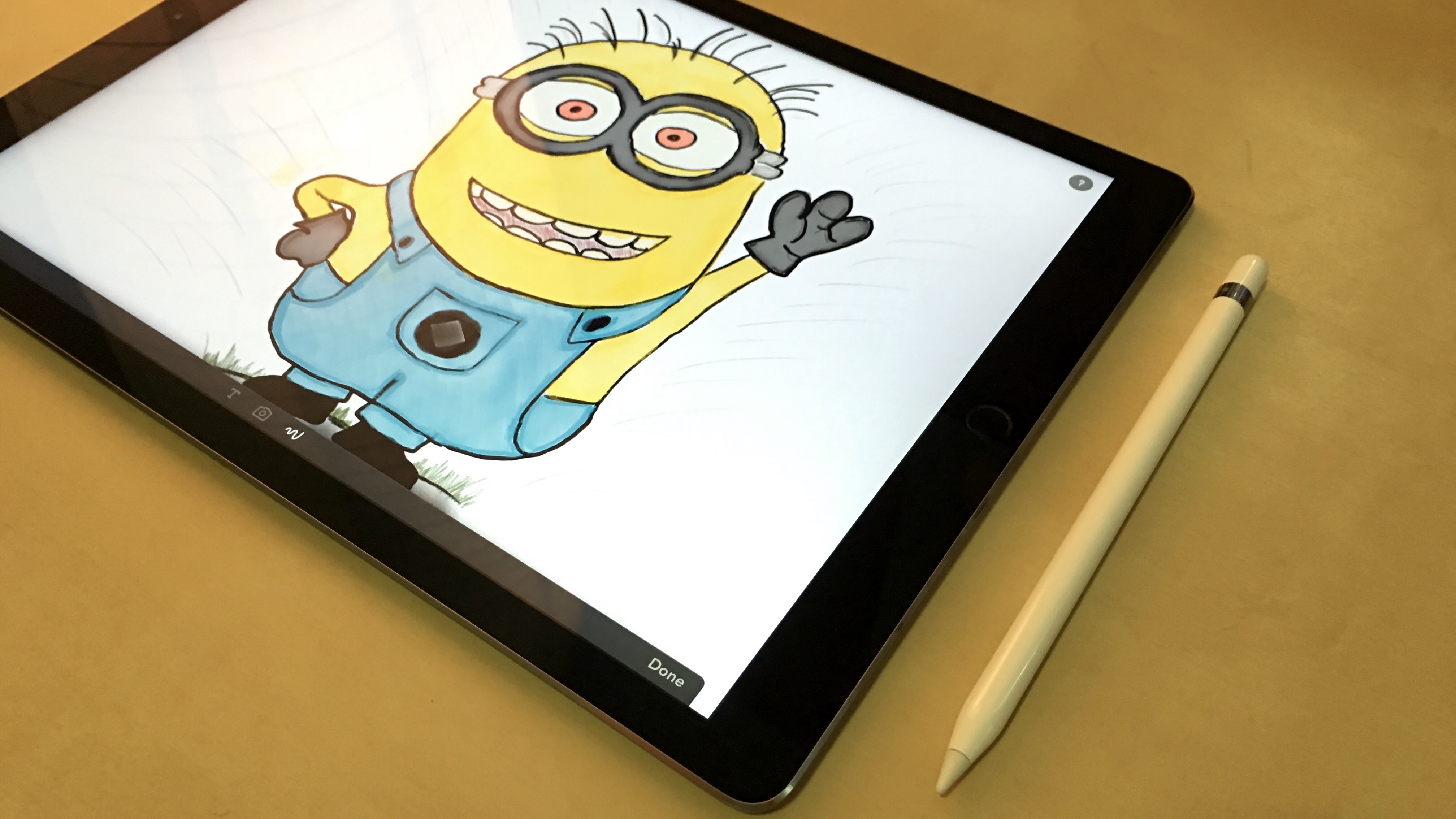 Digital styluses provide precision input and enable accurate drawing and handwriting, turning iPads into digital sketch pads and notebooks. iPad Pro users will absolutely want the new Apple Pencil ($99, review here), which pairs instantly and charges over Lightning while offering palm rejection, pressure and angle detection, and low latency, but only works with the new big screen and ships in 4-5 weeks from Apple currently. Adonit’s Jot Dash ($49.99), a staff pick, lacks pressure sensitivity and palm rejection but works with all iPads and features a pen clip for easy carrying between uses. Adonit’s Jot Touch ($74.99, reg. $99) is most like Apple Pencil with palm rejection and pressure sensitivity but requires using specific apps for these features. 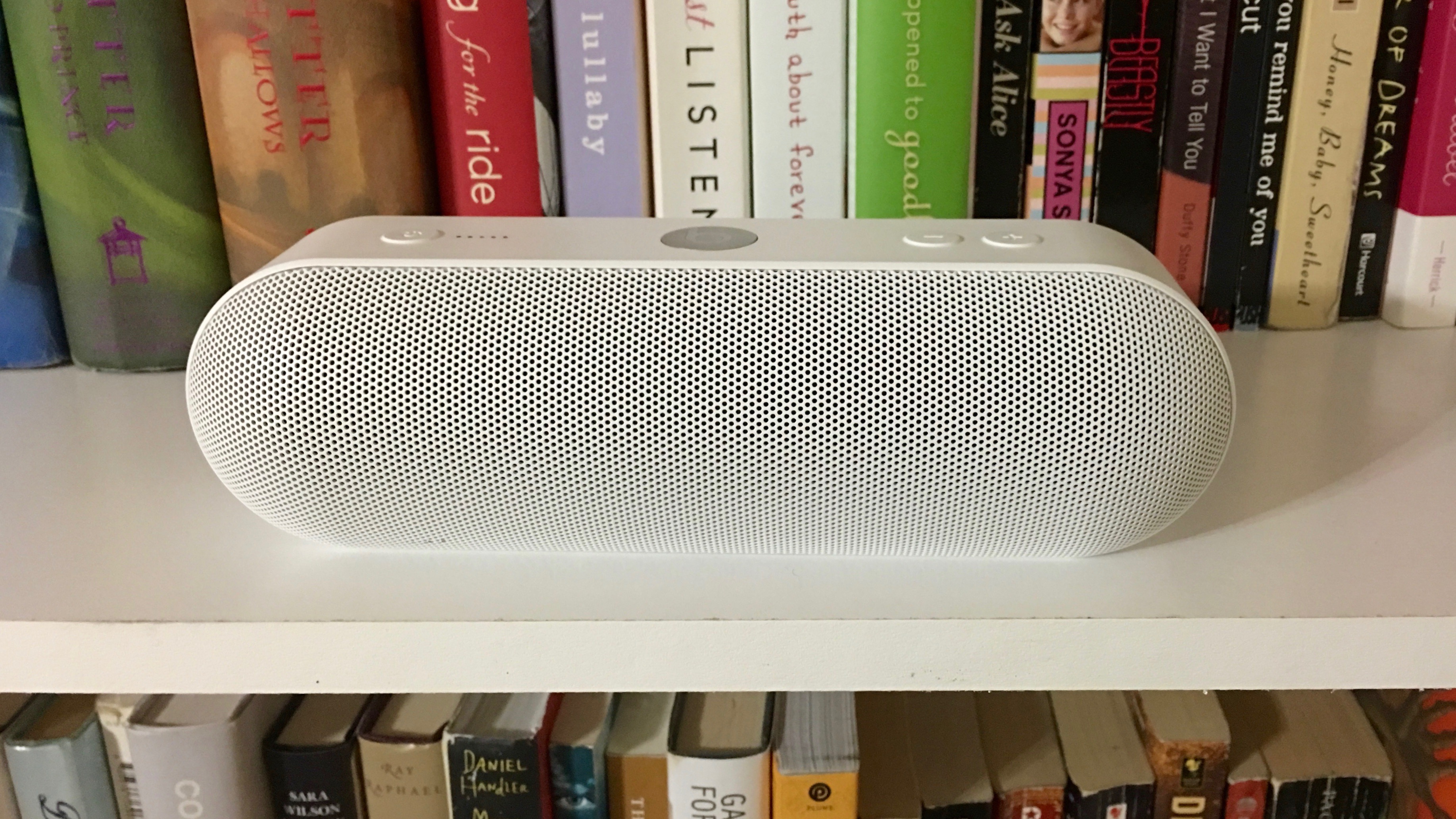 Apple’s new Beats Pill+ ($229) charges with Lightning like iPads, pairs wirelessly over Bluetooth, and features USB charge out for powering low battery iPhones and iPads. Optionally, you can still find Beats Pill 2.0 ($129.99, reg. $200) speakers discounted and in more color options, although these are somewhat smaller and charge over micro-USB. 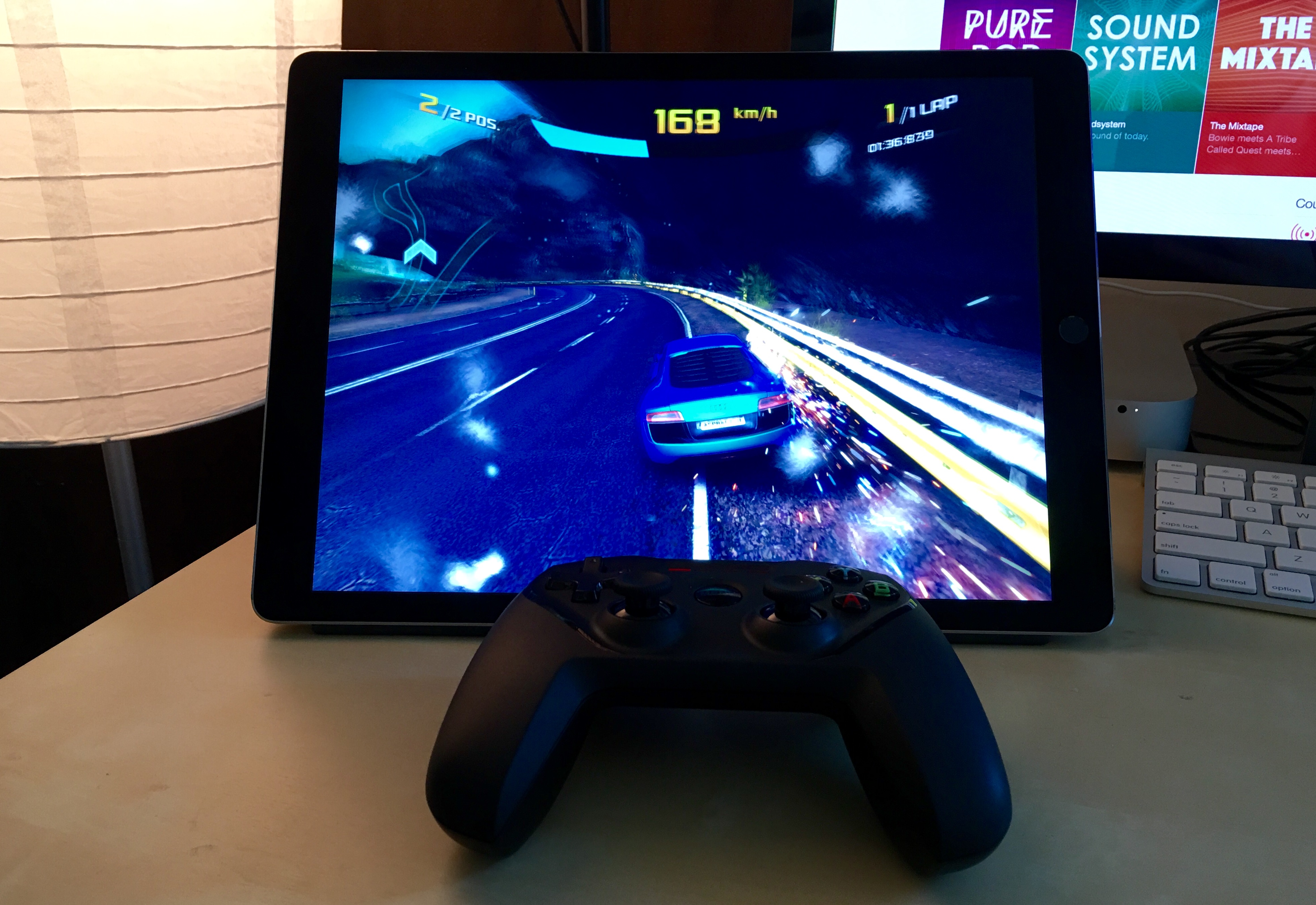 For gaming, adding an MFi (Made for iPad) Bluetooth controller can maximize both fun and skill. I originally picked up a SteelSeries Nimbus ($49, hands-on here), which conveniently recharges over Lightning, to try with the new Apple TV, but paired it with iPad Pro to recreate a similar gaming experience, only more portable. A second Lightning-equipped option, Horipad Ultimate ($49), has since surfaced. Another popular option that work with iPads and iPhones alike is the SteelSeries Stratus ($41.97, reg. $79.99), which comes in either black or white.

Unlocking the iPad’s full potential often requires adapters to turn the Lightning port into more than just a charging port. Apple’s Lightning to USB Camera Connector ($29) lets you directly transfer photos and videos from iPhones and cameras to iPad. Alternatively, Apple’s Lightning to SD Card Adapter ($29) lets you import photos and videos from SD cards used in most cameras. Plug in a Lightning AV Adapter ($43.47, reg. $49) plus a self-supplied HDMI cable to play supported video from iPad to an HDTV or projector, all while keeping iPad charged over Lightning cables like Anker’s color-matched options ($13.99, reg. $34.99). When iPad is on a Wi-Fi network, Apple’s AirPlay feature lets you wirelessly beam photos, videos, and sound to Apple TVs, both old ($64.99, reg. $69) and new ($149). For portable power, consider Anker’s Astro E5 ($32.99, reg. $79.99), an affordable 16,000 mAh battery pack fine for all iPads, or the larger PowerCore+ 20100 ($59.99, reg. $119.99, reviewed here), a 20,100 mAh battery suitable for iPad Pros.

64GB and 128GB iPads likely won’t need any add-on storage, but 16GB and even 32GB iPads may need to offload large media storage like music libraries and movie collections to Lightning flash drives for enjoying media when streaming isn’t ideal. SanDisk’s iXpand 64GB Lightning flash drive ($49.99, reg. $99.99) features a USB connection for loading media from your computer, and a Lightning port for enjoying media through SanDisk’s app. Other storage options include 16, 32, and 128GB options to double even the highest capacity iPad’s storage, although these require staying connected and using SanDisk’s app to work.

Unlike Macs, iPads can’t print with wired printers and don’t work with every wireless printer, either. The trick when buying a printer that works with iPads is to look for AirPrint support, which means the printer knows how to talk to the software running on iPads. Epson Expression Home XP-420 ($49.99, reg. $99.99) offers AirPrint printing from iPads, and scanning support when connected to Macs or PCs.

The iPad itself is the most important piece of the whole puzzle, and Apple’s tablet lineup has really expanded over the last few years. Apple currently sells 5 models in total including two 7.9″ minis, two 9.7″ Airs, and the new 12.9″ Pro (from $799) which has the fastest hardware inside. The medium-sized iPad Air 2 (from $499) and small-sized iPad mini 4 (from $399) feature very similar internals and support all of iOS 9’s multitasking features, while the older iPad Air (from $399) and iPad mini 3 (from $269) are somewhat slower and can’t keep two apps running persistently side-by-side. 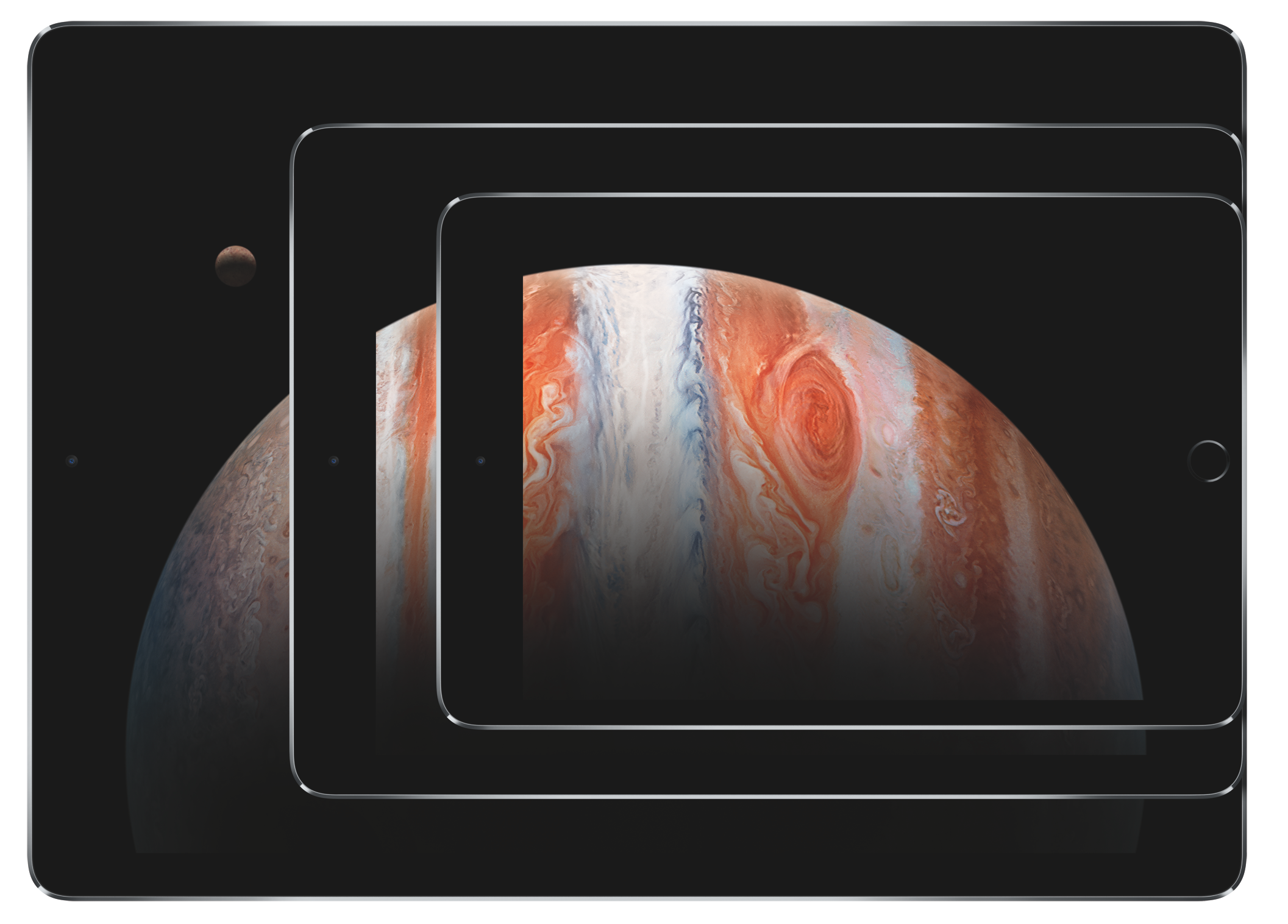 Screen size will be a very personal preference, with smaller screens being more portable and larger ones feeling more capable. Regardless of which iPad screen size you pick, I highly recommend considering at least a 32GB or higher storage capacity if possible. Apple’s 16GB iPads in some cases can be difficult to manage with even a handful of apps, games, and videos even if your photos and music live in iCloud, especially if iPad is your main computer. Even the 32GB models will be somewhat pressed for space, depending on how much you keep on them.

Finished shopping for the iPad user in your life and need ideas for iPhone and Mac fans? Then be sure to catch up on and share our 9to5Mac iPhone and Mac Holiday Gift Guides, plus check out our HomeKit, photography, premium audio guides and stay tuned for even more!