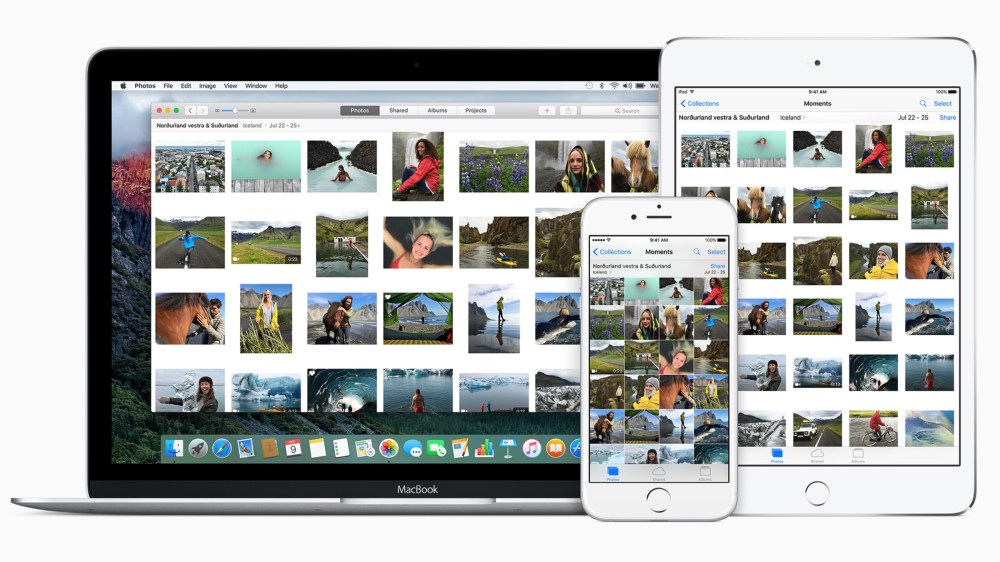 I’ve been all in on iCloud Photo Library since Apple replaced iPhoto with the new Photos app on the Mac last year and I haven’t looked back since. I pay $2.99/month to sync my 13,206 photos and 1,087 videos (plus iOS device backups) with iCloud, and this allows me to take or save photos and videos from any device and have them appear across the others including the web, edits, albums, and all. I even have a system to help ensure to if something in the cloud gets hosed that everything will be fine at home (and if the house burns down hopefully the cloud is still there).

This also enables me to access my 155 GB photos library in the Photos apps on iPhones and iPads that otherwise couldn’t fit that much content. Thumbnail previews are available at all times, and full resolution versions download on the fly as needed. When you’re iPhone, iPad, or Mac needs more local storage, Photos can remove full-res images and downloaded videos to make more space using an optimize storage option. This works pretty well especially on higher capacity devices, but there’s one problem…

Photo and video purging happens automatically as needed with iOS and OS X deciding when the time is right, but it’s not perfect at knowing. Google Photos (which is free but uses its own app) takes a different approach by putting a great big button in the settings section that lets you free up storage on the spot by purging downloads that are already in the cloud.

iOS lets you remove all downloaded songs and movies from the Music and Videos apps, but there’s no similar action for manually removing downloaded photos and videos from the Photos app in a single step.

Here’s a real world scenario where that’s a problem and a button like Google’s would come in handy. My iPhone is 128GB and my iPad has 32GB of storage. The iPhone’s a better video camera with 4K capture, but the iPads a better video editor with a larger display and faster processor.

While I was away from reliable Wi-Fi last week at CES, I tried AirDropping a short 4K video from my iPhone to the iPad to edit it with iMovie, but the file transfer failed with an insufficient storage warning. Photos was the single app taking up the most amount of space even with optimize storage turned on because there were local downloads lingering around, and iOS didn’t know to purge them and make room for the AirDropped video. 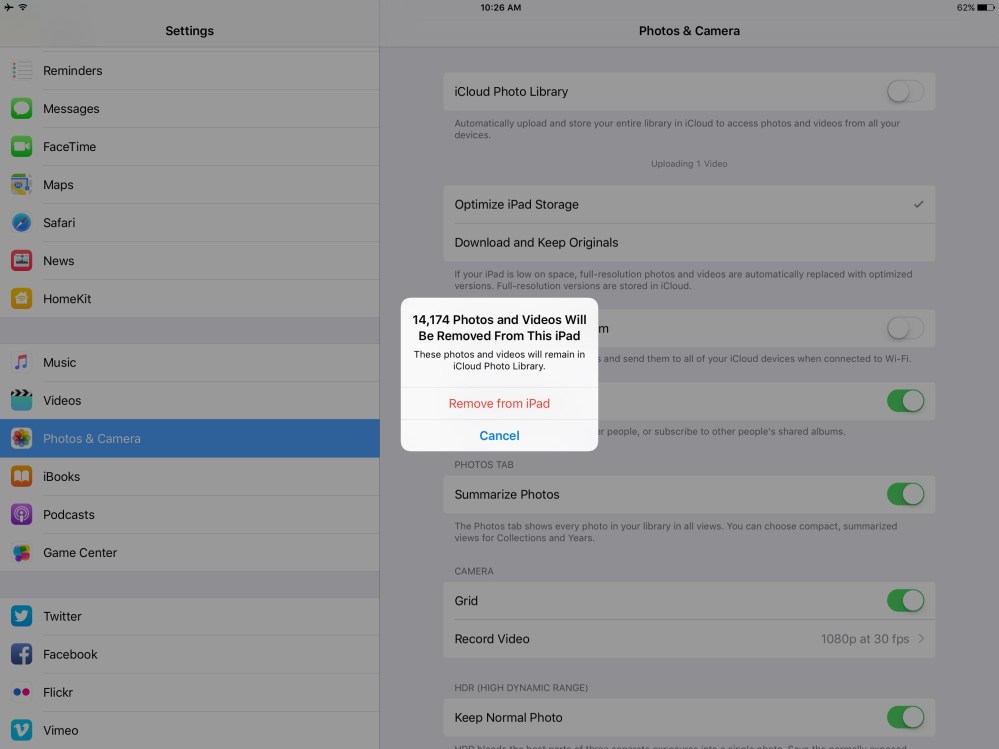 Every single photo and video stored locally on the iPad was already synced to iCloud and saved locally at home on my Mac, so the solution was to fully disable iCloud Photo Library on the iPad to remove those large files. Okay, nothing lost but time. Once I was back home on reliable Wi-Fi, I just had to re-enable iCloud Photo Library on my iPad to continue having access to the photos and videos that I shoot on my iPhone but with a much larger display.

I could switch to alternative solutions that bring me to the same place, but I really like Photos and iCloud Photo Library and just want to see this one tiny feature added to improve the experience. The solution here is a pretty easy fix and one I hope we see with iOS 10 and OS X 10.12 later this year.

If you’re a Photos user or iCloud Photo Library user, are there any simple features you’d like to see added as well? As ever, let us know in the comments!