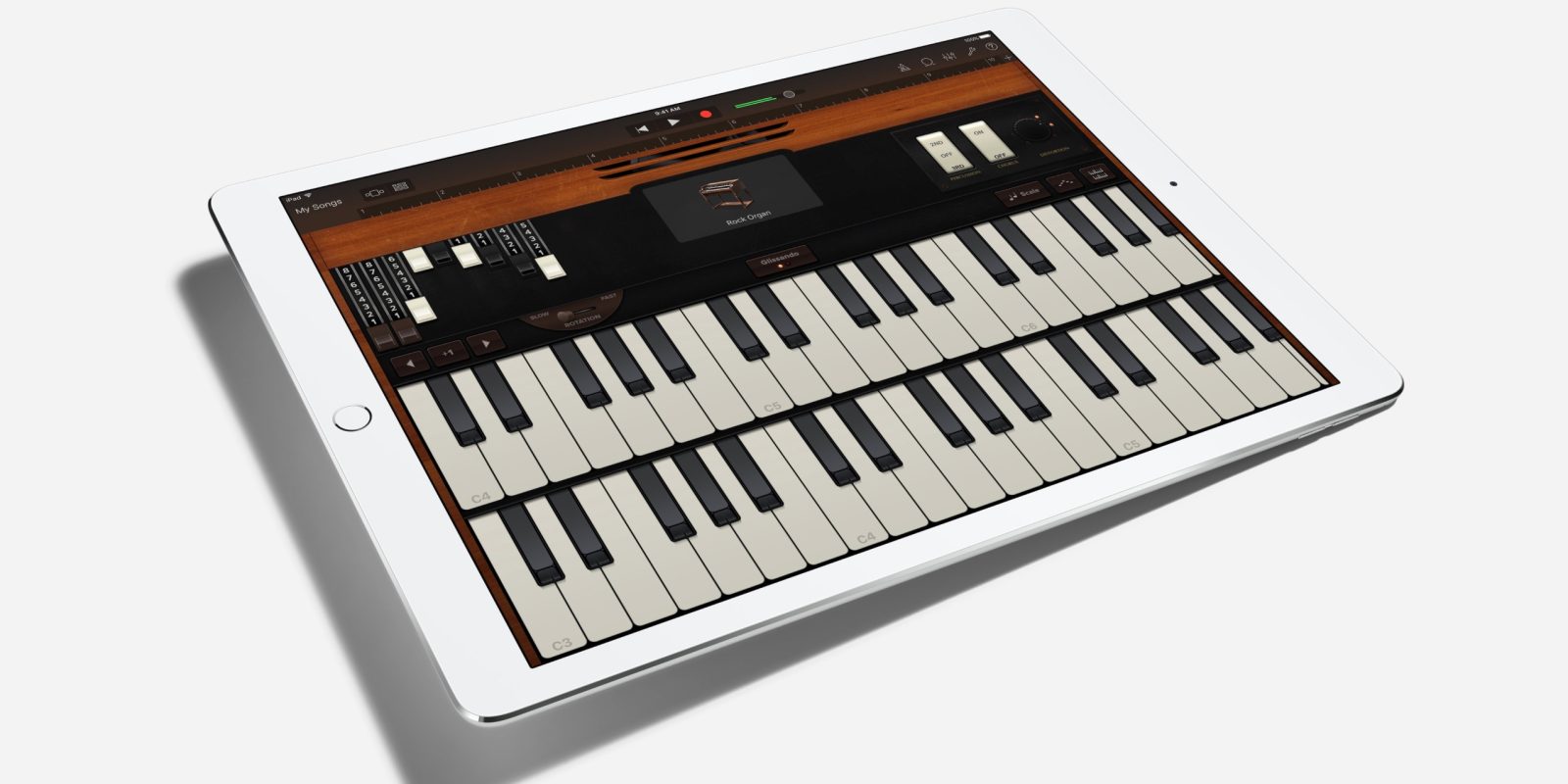 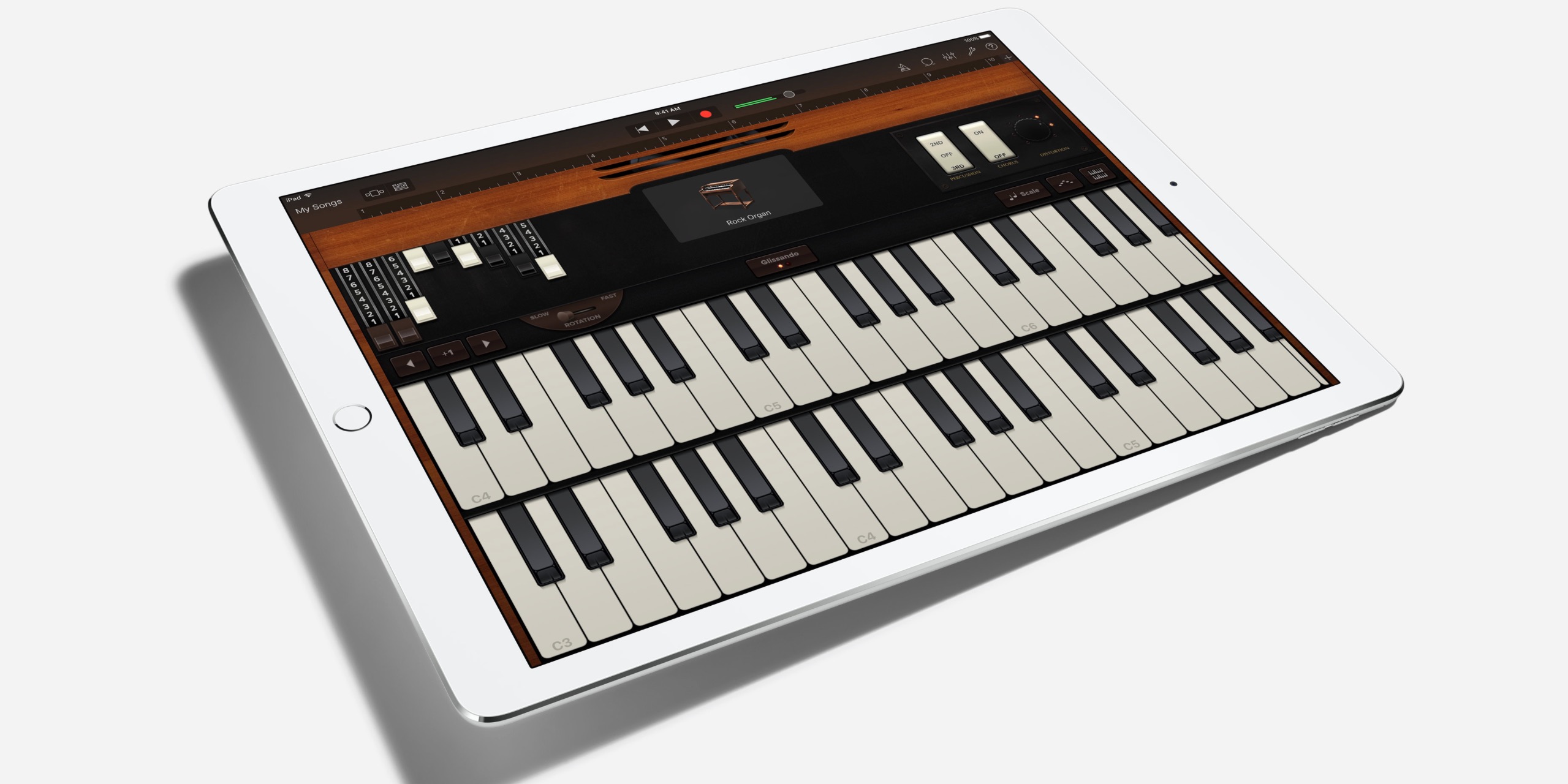 Apple today is releasing a new update to GarageBand for iOS that includes enhancements to take advantage of the iPad Pro’s 12.9-inch Retina display. The new version, previously only shown in iPad Pro marketing material, shows more of instruments and tracks in a single view than on smaller iPads and iPhones. New 3D Touch features are also being included for iPhone 6s and 6s Plus users. Separately, Apple is releasing a new music app called Music Memos, and adding a new Live Loops feature to GarageBand for iOS.

From Apple’s press release on the new software:

“Musicians around the world, from the biggest artists to aspiring students, use Apple devices to create amazing music; the innovative new Music Memos app will help them quickly capture their ideas on iPhone and iPad whenever inspiration strikes,” said Philip Schiller, Apple’s senior vice president of Worldwide Marketing. “GarageBand is the most popular music creation app in the world, and this update helps everyone easily tap into their musical talent with the powerful new Live Loops and Drummer features, and adds support for the larger iPad Pro screen and 3D Touch on iPhone 6s and iPhone 6s Plus.”

GarageBand was notably among the list of Apple’s own apps that weren’t updated for the bigger display in time for the iPad Pro’s release. Rather than reflecting the version shown on the iPad Pro’s marketing site, GarageBand scaled the version on iPad minis and iPad Airs up to present a bigger version without more context. Today’s release shows what Apple has been working on during this time and should be a significant update for GarageBand users.

Other apps like iMovie were ready in time for iPad Pro’s release in early November and included features that take advantage of the more powerful iPad. iMovie on iPad Pro can edit multiple 4K video streams, use shortcuts with Smart Keyboard, view a full-height Media Browser, plus pixel-for-pixel 1080p video.

More details on what’s new in GarageBand from today:

GarageBand for iOS is the world’s most popular mobile music creation app, and the new GarageBand 2.1 update introduces Live Loops, an entirely new and intuitive way to create amazing music. Inspired by DJ hardware controllers and drum machines, Live Loops makes it easy for anyone to create music by simply tapping cells and columns in a highly visual grid to trigger different looped instruments and samples. The loops can be performed, arranged and remixed live, and GarageBand automatically keeps all the beats in sync with perfect time and pitch. To get you started, Live Loops comes with a library of Apple-designed loop templates in a variety of genres including EDM, Hip Hop, Dubstep and Rock, or you can create your own loops from scratch.

GarageBand 2.1 for iOS also includes the new Drummer feature with nine EDM and acoustic virtual session drummers that provide their own signature sound, as well as an expanded selection of amps for bass players. Advanced GarageBand users can now create even more dynamic and polished sounding songs using new automation features, controls recording and a new simple EQ. GarageBand 2.1 looks stunning on the expansive 12.9-inch Retina® display on the new iPad Pro™ and gives you access to even more controls and room to play. And on iPhone 6s and iPhone 6s Plus, the app now supports 3D Touch, allowing you to play with more expression. For more information about the new GarageBand for iOS, visit, www.apple.com/ios/garageband.

The new version of GarageBand for iOS is rolling out on the App Store today. Here are the full release notes for version 2.1:

• Use Live Loops to create music by triggering instrument loops and DJ-style effects in real time using Multi-Touch gestures* • Add a virtual Drummer to your song who takes direction and performs realistic acoustic & electronic drum grooves • Record adjustments of any Touch Instrument control knob in real time • Create and edit automation curves to control the volume of any track • Shape the sound of a Touch Instrument or audio recording using Simple EQ and Compressor • Plug in a bass guitar and play through vintage and modern bass amp rigs • Adds over 1,200 new Apple Loops and sounds • Record up to 32 tracks simultaneously** • Use third-party instrument apps in your song with Audio Unit Extensions*** • Directly import or export GarageBand projects using iCloud Drive • Use 3D Touch to play keyboard sounds with polyphonic aftertouch****

And just in time for today’s release, our friends at 9to5Toys are featuring a giant iPad Pro deal for new customers looking to save on Apple’s biggest tablet.