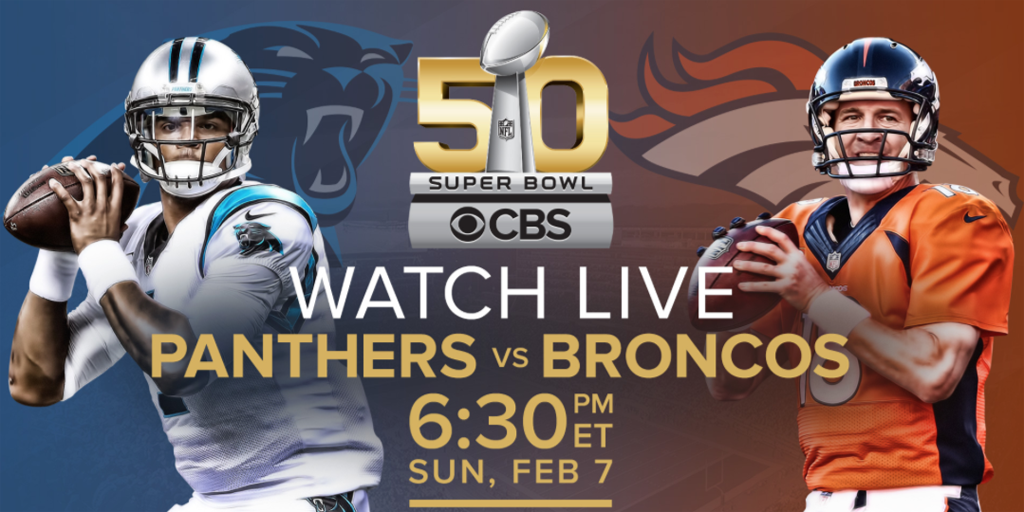 To watch on Apple TV or iPad, download the free CBS Sports App. On a MacBook, use the CBS Sports Live Player on the web. The NFL has put a movie-style trailer online, together with a photo slideshow.

Although Apple is unlikely to do another iconic commercial like its 1984 ad (or cringe-worthy attempts it made after), it has uncharacteristically played a small part in hosting the NFL Host Committee this year on its home turf of Silicon Valley. Apple provided the host committee with products and equipment (Macs and iPads?!) and is a supporter of the host committee, but chose not to have its logo or name included in any of the marketing material. 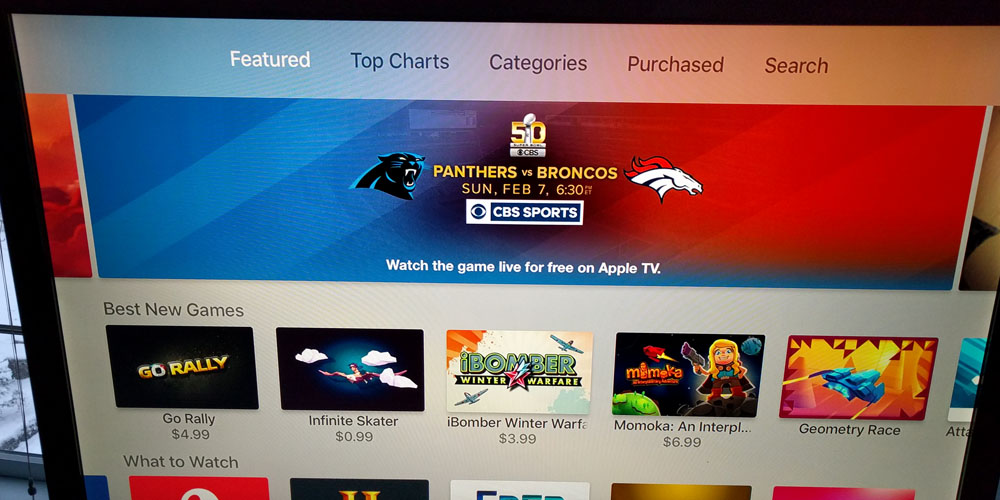 Only eligible Verizon customers can stream via mobile data, but you’re probably not going to want to do that anyway given the way it would burn through your plan.

While watching the game may be free, things are rather more expensive for the teams. CBS has an interesting feature on just how much each team spends on each position, starting with the Quarterback and Running Back.

Cam Newton has the second-highest cap number on the Panthers. The five-year, $103.8 million contract extension (with $60 million in guarantees) he signed during the offseason gave the Panthers almost $1.7 million of cap relief. Newton’s 2015 cap number prior to the new deal was $14.666 million, the salary of his fifth-year option.

Carolina is fortunate Newton signed an extension. He would be in a position to surpass Aaron Rodgers as the NFL’s highest-paid player at $22 million per year if he had played out his rookie contract. An exclusive franchise tag, which currently projects to $25.94 million for the 2016 league year, would have been necessary. The exclusive tag and his MVP type season would have given him leverage for a long-term deal averaging more than $25 million per year with more than $70 million in guarantees.

Peyton Manning has Denver’s biggest cap charge. This is after taking a $4 million pay cut in the offseason to lower his salary from $19 million to $15 million. Manning earned back $2 million of his $4 million salary reduction with Denver winning the AFC Championship. He will get the other $2 million with a Super Bowl win where he plays at least 70 percent of Denver’s offensive snaps.

There’s a huge discrepancy in how the teams invest at running back. Jonathan Stewart signed a five-year, $36.5 million extension (including $23 million guaranteed and worth a maximum of $41.5 million through salary escalators) in 2012. He has the fifth-highest running back cap number this season at $8.3 million. Carolina has the second-highest fullback cap number with Mike Tolbert at $3.425 million. He is one of two NFL fullbacks playing on a contract averaging at least $2.5 million per year. The Panthers also have $4,333,333 in dead money, which is a cap charge for a player no longer on the roster, from releasing DeAngelo Williams last March.

Broncos leading rusher Ronnie Hillman is making $770,000 in the final year of a four-year rookie contract worth $3,000,832. He splits carries with C.J. Anderson, whose $595,018 cap number wasn’t included in the calculations.

Check out the rest of the tally over at the CBS website.

Superbowl 50 for those not part of the US Football tradition is described as:

The Panthers finished the regular season with a 15–1 record, defeating the Arizona Cardinals 49–15 in the NFC Championship Game and advancing to their second Super Bowl appearance since the founding of the franchise in 1995. The Broncos finished the regular season with a 12–4 record, and denied the New England Patriots a chance to defend their title from Super Bowl XLIX by defeating them 20–18 in the AFC Championship Game, and joined the Patriots, Dallas Cowboys, and Pittsburgh Steelers as one of four teams that have made eight appearances in the Super Bowl.

The game is the 50th edition of the Super Bowl, first played in 1967 in anticipation of the 1970 merger of the American Football League and the NFL; the league emphasized the “golden anniversary” of the game throughout the season with various gold-themed initiatives (including the adoption of gold-tinted logos across all NFL properties), as well as temporarily suspending the tradition of naming each Super Bowl game with Roman numerals (under which the game would have been known as “Super Bowl L”), so that the logo could prominently feature the Arabic numerals of 50. In addition to the Vince Lombardi Trophy, the winner of Super Bowl 50 will also receive a special 18-karat gold-plated “50” trophy.