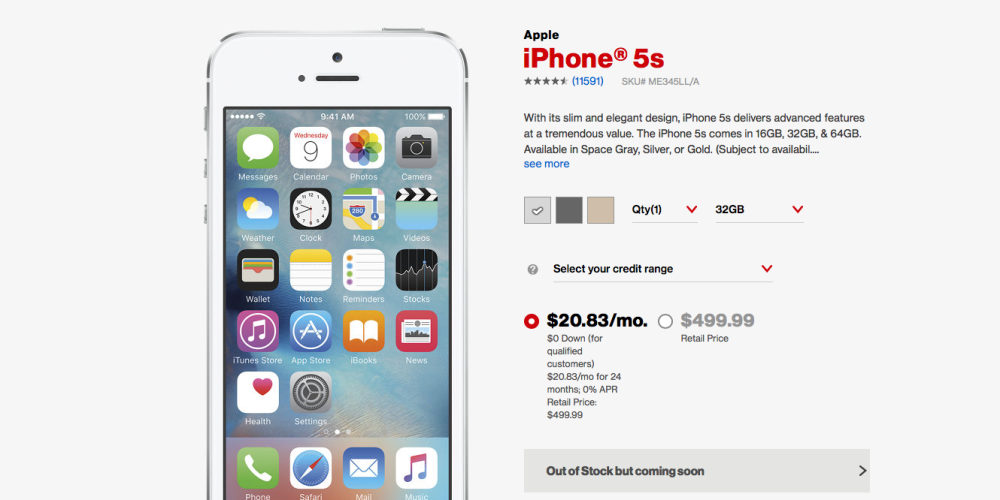 Apple is expected to announce and release the oft-rumored 4-inch iPhone SE later this month, and ahead of that launch, supply of the company’s current 4-inch device is running low. Verizon, Best Buy, Walmart, AT&T, and Target all list limited or no availability or the iPhone 5s online, while we’ve also heard that supply at T-Mobile retail stores is running low. Also, there are already a handful of cases for the iPhone SE available on Amazon.

On Target’s website, a search for “iPhone 5s” returns no results, while the direct links to the original product pages for the device variants are also dead. There’s no indication on Target’s part that it will be getting more units in, either.

On Walmart’s website, the only result for a search for “iPhone 5s” is the unlocked model coupled with a Straight Talk plan. Coincidentally, even this model is listed as “Rollback,” which is Walmart’s way of saying it’s on clearance and won’t be replenished when gone.

Finally, Best Buy’s website shows several models of the Sprint and Verizon iPhone 5s as “Sold Out Online.” Furthermore, the 16GB silver model and 32GB Space Gray unlocked models are also listed as sold out online. Like Target, Best Buy doesn’t make any indications that it will be receiving more stock.

It’s worth noting that while the iPhone 5s is expected to stay around when the SE is released later this month, it could be that it will only stick around in countries such as India, where the 5S is growing in popularity among consumers and where it may take longer for the SE to become available. It could also be that Apple plans to keep the iPhone 5s around everywhere, but in a limited fashion, such as only in one storage/color variant.

Nevertheless, it’s clear that carriers and retailers around the country are preparing for the announcement and release of the iPhone SE. Apple is expected to hold a press event on March 21st to announce the device, as well as a new 9.7-inch iPad Pro and new Apple Watch bands.