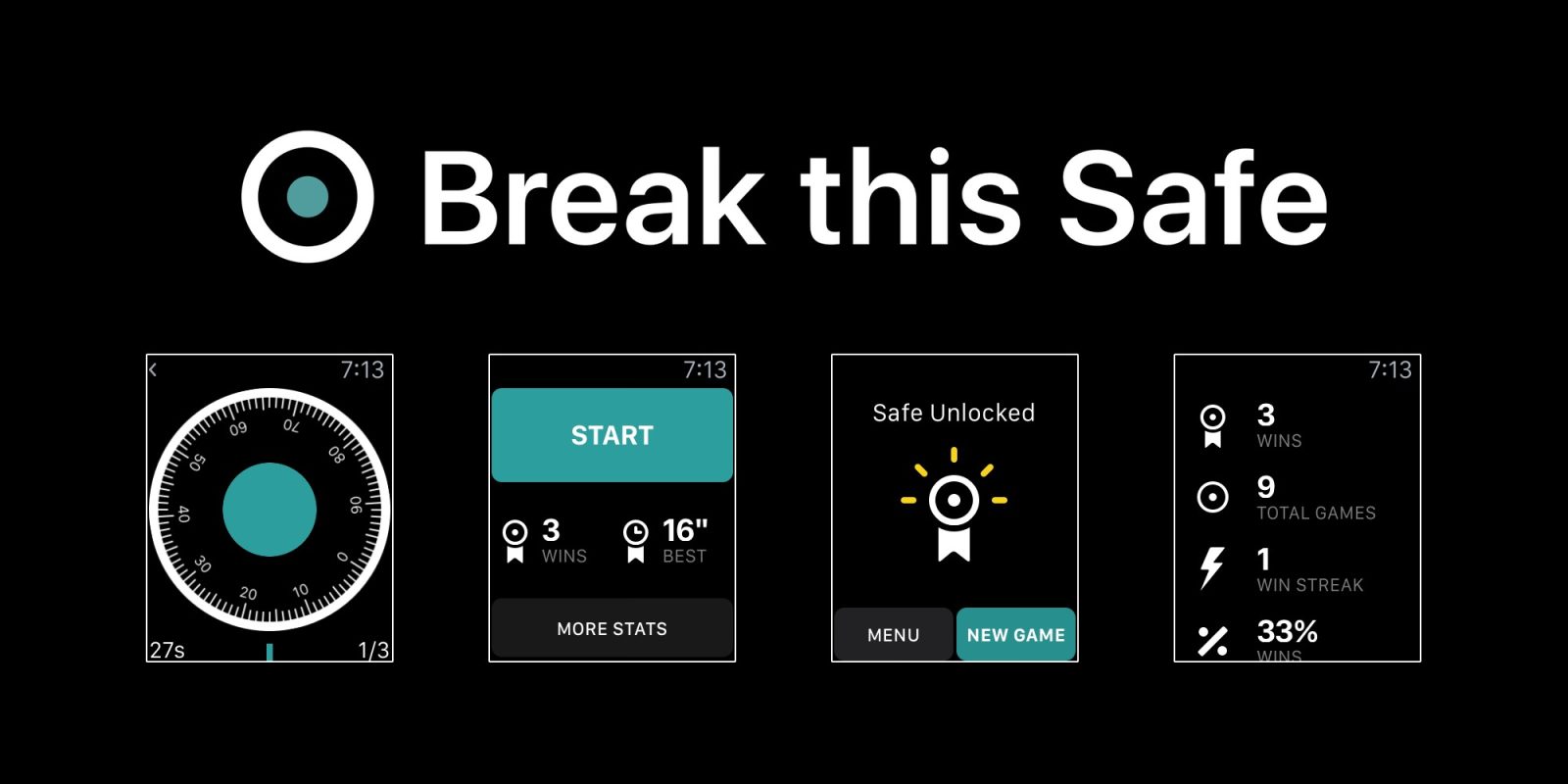 We’re nearing the one year mark of the Apple Watch’s original release. When Apple first announced the Watch I was excited to see all the creative applications, tools, and games developers would make for it. The watch was a new product category begging for creative development. After a full year, I believe we’re finally starting to see what that means, starting with Rafael Conde’s Break this Safe Apple Watch game.

Common complaints with the Apple Watch usually come back to the device’s hardware. It’s too slow, and too limiting to be seen running full-blown apps, and much less seen as potentially being used as a device entirely on its own. I’ve personally removed nearly all third-party apps on mine and left only those that I frequently use. The ones that remain are there only because of their integrated watch face complications. I want to love the Apple Watch, but I also understand developers can only do so much to work around this device’s first generation issues and this presents a double-edged sword for creative and driven developers.

When the Apple Watch launched, it presented a new sales platform to further garner recognition in the iOS App Store (financially or otherwise), but in doing so it also pushed developers to put their name onto what is still early generation hardware. No matter how amazing other aspects of the product may be, it would always be limited by the physical hardware it ran on.

Rafael Conde knew this even before he began developing Break this Safe, a new Apple Watch game centered on using the Apple Watch’s crown. After reading some initial impressions on the Apple Watch and it’s amazing Digital Crown, Conde knew he wanted to build something on this hardware. As it turned out though, elements necessary to the game’s creation just weren’t available within the APIs at launch. Eventually, with watchOS 2.0’s launch, he knew he had a chance at building the app as he wanted.

Diving right in, Conde ran into plenty of problems. Some programmatically, and some just creatively. How do you display a rotating image when images on the Apple Watch can’t be rotated? How do you smoothly animate in the Stats table? He iterated and worked through the project to eventually achieve the best possible version of his desired game.

Eventually Conde reached the version of Break this Safe that we see today. The game, the most creatively frustrating game I have ever played on the Watch, has quickly become a favorite past-time of mine. The goal of the game is turn the dial on a “safe” and crack a combination before the allotted time runs out. Rotating the Digital Crown, a user receives haptic feedback from the watch’s Taptic Engine whenever the correct number in the 3-number combination is near. The vibrations from the watch increases ever so slightly as you hone in closer and closer to the right answer.

The first few times I played the game I was extremely aggravated. I couldn’t quite feel the vibrations and I kept thinking that maybe my wrist wasn’t sensitive enough. After some more plays I realized I should switch from my third-party band to a real Apple one. That seemed to help as the Apple band held better against my skin. Once switching bands I immediately started noticing the vibration and the game quickly became addictive. With three difficulty settings, you only have a set amount of seconds to try to break the safe combo. It’s an intense game, that at the most can take 30 seconds for any given round, but you’ll play it over and over again as you race against the clock.

These types of games really push the limits of the Apple Watch both in hardware and software development alike. The wrist is a perfect place for quick interactions, but normally lengthy interactions with the Apple Watch always feel disjointed and jarring when you just want something done now. Where most apps take about 30 seconds to launch, Conde’s game launches quickly and gets you right into the bite-size addictive action. I’ve found myself returning over and over to the game just because of its sheer simplicity in design, but complexity in gameplay. It really took me quite a long time to feel the subtle vibrations on my wrist.

Conde breaks down his challenges in building the game (his first Apple Watch app) in his Case Study. He delves into one of the more limiting challenges with making the watch vibrate. Part of the problem is that to make the watch vibrate, the Apple APIs will also play a notification alert sound. Thus when spinning the crown to crack the safe, users will get a small ping indicating they hit the right number in the safe’s combination. It’s technically “cheating” to play the game with sound enabled (which is exactly what I had to do to fully “get” the game), so Conde opted for reminding users to silence their watches before playing. This, in part with the rampant cheating already on the leaderboards, is why he decided against integrating with GameCenter. There is a personal leaderboard area, so you’ll still be able to track your progress as the game goes on.

In building the app, Conde also faced another problem a lot of developers are facing in the App Store. Developers looking to build Apple Watch-only apps don’t have a way to deter potential buyers from buying an app they can’t partake in. For example, if a player bought an Apple Watch-only game or app, but didn’t have an Apple Watch, then they could essentially return to the App Store and leave a negative review because the game for them wasn’t playable at all. Conde decided to use a tip-jar style form of donation (akin to Overcast and Pedometer++ apps). I like and appreciate the idea significantly, but I also recognize Apple’s need to build better requirement specific filters throughout the App Store for users and developers alike.

I highly recommend downloading Break this Safe from the App Store and playing with it to better understand the directions and creative areas that more Apple Watch apps should go after. It’s a fun way to kill a few minutes, and something I return to daily. Are there any creative Apple Watch games or apps you use and are impressed with? Let me know in the comments below or on Twitter @gregbarbosa.

Break this Safe is available for free in the iOS App Store with in-app purchase donations to support the creator.