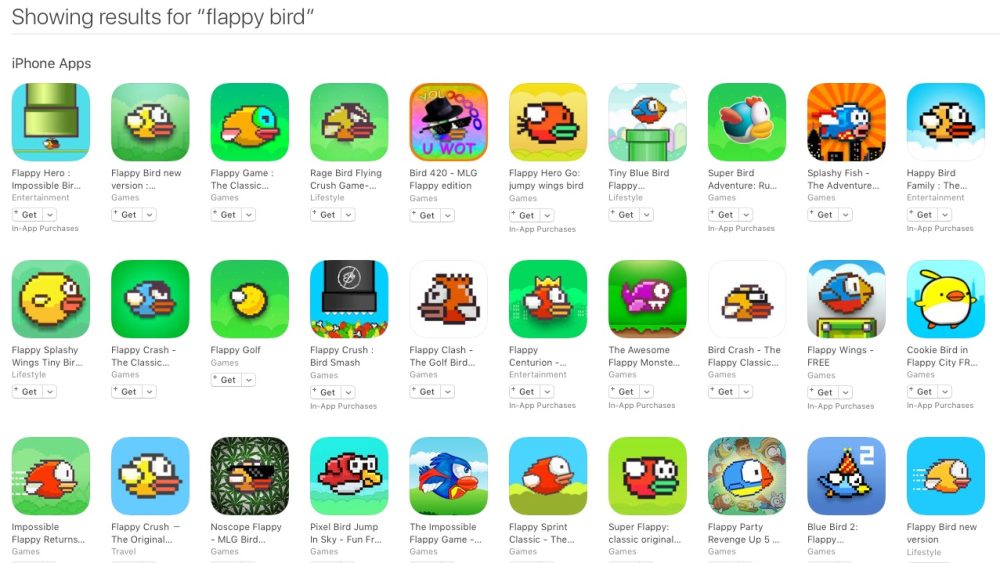 Apple has just published a list of App Store improvements that will begin to go into effect next Wednesday, September 7th. The changes seek to remove broken and forgotten apps from the App Store, apps that are currently breaking App Store review guidelines, and that are just no longer functional.

The notice to developers today indicates that Apple will begin reviewing and removing non-functional apps on September 7th within all categories from the App Store. Apps that automatically crash on launch will be immediately removed from the App Store, but other apps will have 30 days to submit an update to keep the app within the store. Apple makes it clear that apps that are removed won’t lose functionality for users who currently have it installed, but future customers will no longer be able to search for it.

In preparation for the coming culling, Apple suggests developers read the latest App Store Review Guidelines and confirm that all current apps follow them. Apple recommends that developers continue to address overall functionality issues within the app and to update it regularly. Most interestingly, they explicitly state that if an app is no longer being updated, developers should consider removing it from the App Store. 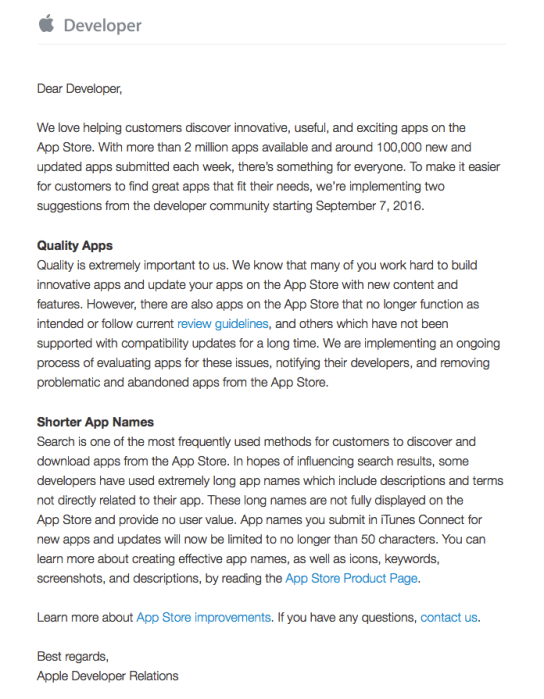 App Store developers today also received emails re-iterating the upcoming changes, alongside an additional indication that shorter app names will also be a focus. Generously used with apps that look to spam search keywords and overtake similar apps, Apple is now discouraging the use of lengthy names. Apps submitted to iTunes Connect will now be limited to 50 characters. As of now these spammy names usually include descriptions and terms not relevant to the applications or user.  Developers looking for some help in this area can read the App Store Product Page for more information.

These changes should help curb some of the spam and abandoned applications that currently resides in the App Store. It isn’t uncommon now to download an app and see that it still hasn’t been updated to support the new iPhone 6 (or even iPhone SE) resolution, or that it just crashes within its main functionality. The new naming limitations will also hopefully hamper development farms that create keyword-related app titles looking to copy the success other top-grossing applications. Unfortunately, Apple’s update today doesn’t indicate that it will retroactively adjust apps with absurdly long titles.

While today’s update looks to deter spammy app names, that may just push those developers to look more intently into Apple’s new Search Ads. Apple’s Phil Schiller noted that developers should look into “conquesting” with Search Ads (“…you can do conquesting. You can use someone else’s brand in your ad words that you want to use”). Hopefully a combination of these changes will help create a better App Store ecosystem for users coming this Fall.

Apple’s iPhone 7 event is next Wednesday, September 7th. We’re expecting to see Apple’s latest flagship iPhone to launch, alongside the possibility of a new Apple Watch.