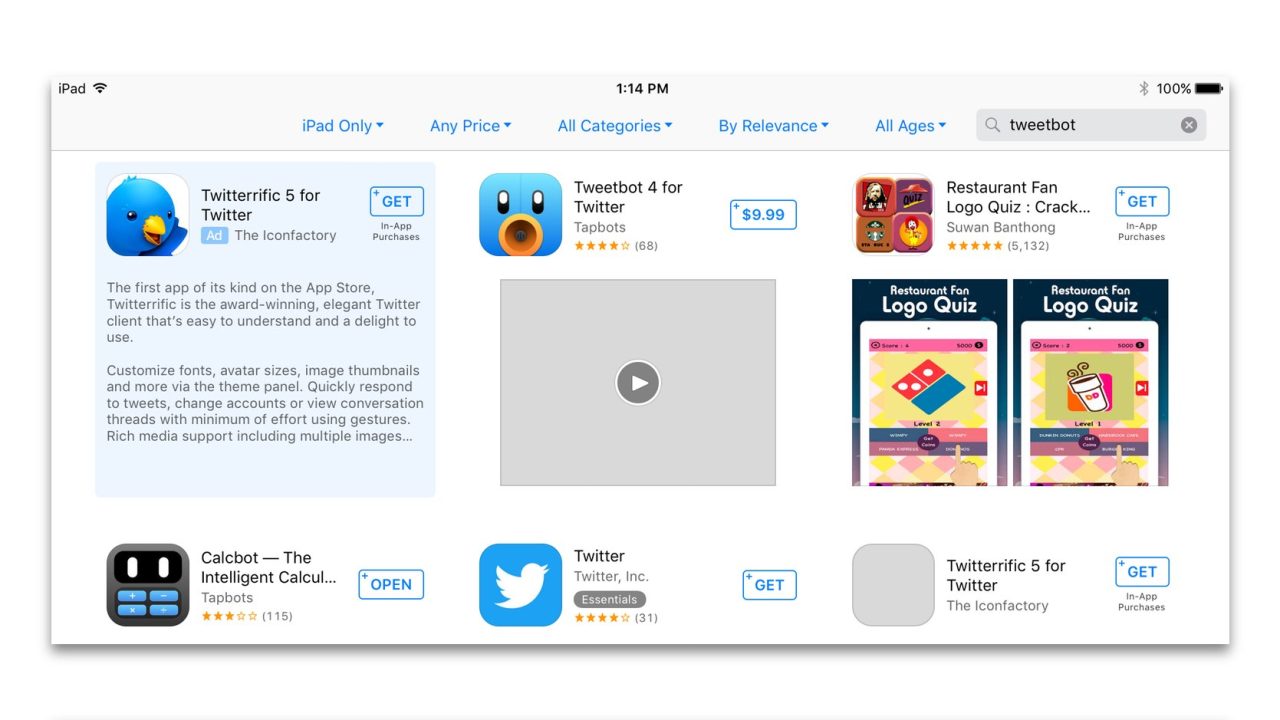 Since iOS 10’s first beta hit last week, testers have been seeing signs of Apple’s Search Ads in the App Store. Officially announced a week earlier, Search Ads were marketed as being a way to help customers “discover or reengage” with an application. Something I wondered immediately after the original announcement was how Apple would regulate the Search Ads in a highly competitive market. After having used iOS 10 for over a week now, I’m not any less concerned.

In WWDC 2016’s Introducing Search Ads talk, Lindsay Verity, Director of Product Management at Apple, explained exactly how Search Ads would work within the App Store. She explained that apps within the App Store would only be able to advertise within their specific category. She gave the example of a pizza delivery application wanting to advertise to gaming related searches. Unfortunately, as the pizza delivery application is based on food, it can’t advertise to a game based category. This would remain true no matter how much the developer was willing to bid for the ad placement. What would this mean for competing apps within the same category though?

This week Paul Haddad, creator of Tapbot’s Tweetbot, shared an interesting result of this very situation in the App Store. When searching for Tweetbot in the App Store on iOS 10, Twitterific comes up as a Search Ad directly before Tweetbot. Some of the replies to the tweet seemed to believe that Twitterific was purposefully adjusting keywords to come up alongside Tweetbot. This most likely isn’t the case though. As Search Ads are still in beta, any developer is allowed to sign up for the service, but has no ability to adjust specific keywords when advertising.

Not a game I’m willing to play. pic.twitter.com/DUoRzoD1fB

we don't have Tweetbot as a keyword. All we did was click the “enroll” button. Eveeything happened automatically.

There is another possibility though, and one that many application developers will soon run across. According to the Introduction to Search Ads developer talk, Search Ads decide on an app’s relevance by pulling data from its App Store Metadata. An application’s App Store Metadata is the data they provide to Apple when submitting apps to the App Store. Verity explains that the app’s title, keywords, and descriptions are taken into account when relevance for ads are being decided.

Apple is probably doing some kind of meta data grouping or something. Who knows. No ad settings are enabled in beta.

This means that two Twitter applications, like Tweetbot and Twitterific, may bump heads in App Store Search Ads frequently. Solely for having the ’Twitter’ keyword in their App Store Metadata, either of them make come up when searching for the other. Search Ads here are doing exactly what they are expected to do: advertise apps to a user based on other similar applications they are looking for.

Ignoring any possibility for one developer to be maliciously targeting competing ads against another, Apple’s introduction of Search Ads is only further creating competition in the App Store. Verity explained that 65% of apps downloaded from the App Store are from searches. If a new user were to specifically search for an application by name and found a competitor listed before it, they might question which one was better for them. For a veteran iOS user, and one well aware of both competitors, the decision may be obvious. They want what they specifically searched for, not any other application.

When Phil Schiller met with John Gruber to discuss some of the changes coming to the App Store, he gave some more perspectives on what this meant for indie and larger developers too. Schiller went on to say that, “you can do conquesting. You can use someone else’s brand in your ad words that you want to use.” The team believes that this method of advertising will more likely help the smaller developers over the bigger developers. He goes on to say, “the big developer isn’t going to pick on a lot of small developer terms, but a small developer can try to latch on to a big developer’s name.” This sounds great in practice, but feels very muddled as most smaller developers won’t have the budget to spend on advertising to even attempt conquesting in a degree that would be beneficial to them immediately.

Search Ads have also introduced a proxy for more competitive application pricing. Paid apps may now see even more direct competition from free apps. An application developer could release the latest free game with a multitude of in-app purchases, advertise in Search Ads, acquire significantly more users, and at the end of the day still make more money than a one-time paid app. With the ad for a free app being placed directly above your search results, it would be difficult to ignore its existence.

A perfect example of this would be between the two apps already mentioned above, Tweetbot and Twitterific. Tweetbot being a paid app at $9.99 and Twitterific being free, new users searching the App Store may question one over the other if either were to appear in the Search Ads. 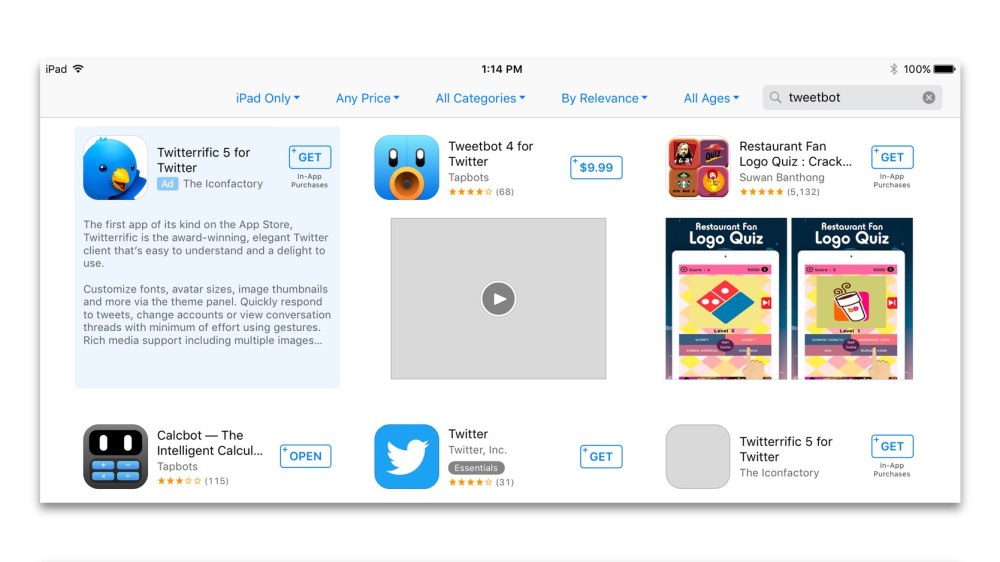 A few commenters on the site here have previously pointed out that Apple could regulate this if they wanted to, but I’m still not quite sure where/how. At what point do you tell a developer their app can’t show alongside their competitor? How would that work when the very nature of advertising is to compete? How would that be regulated or even maintained? After years of begging from developers, the App Store finally got into a rhythm of a faster approval process. Expecting Search Ads to work efficiently within the first few months of its launch doesn’t seem feasible.

Search Ads further set the ground for a more directly competitive App Store experience. Both indie and larger application developers can work to bring their apps to the forefront in ways that didn’t exist beforehand. Search Ads can now give anyone the opportunity to get their names out there (at a literal cost), but may also create a more brutal experience for those who don’t chose to advertise. Application A could be free (with large recurring in-app purchases), and thus Search Ads can be a justifiable purchase. Application B could be a one time purchase, without anyway to introduce recurring revenue, and thus gets pushed off the App Store search radar. I don’t think Apple was completely ignorant to this situation. They introduced new subscription enhancements to in-app purchases for developers, further allowing for those who may want other ways to make money to have it.

As all betas go, Apple is most likely aggregating as much feedback and information as possible to help improve Search Ads before its official launch. Acting on developer and general audience feedback early on can help push the final product into a better direction for all.

During the iOS 10 beta, Search Ads are free for all application developers to join in on. An official release is expected later this fall.

Update 06/22/2016 12:19 PM PST: Added a quote from Phil Schiller on “conquesting” within the App Store to bring relevance to smaller apps.