iOS 10 is now installed on more than two thirds of the active iOS device install base, recording 66.7% twenty-seven days after iOS 10 was released according to Fiksu. Mixpanel is also recording iOS 10 adoption topping 66% since Sunday.

As shown by the graph, iOS 10 has the fastest adoption rate than any previous update, a month after release. Interestingly, iOS 10 initially lagged behind iOS 6, 7 and 9 until about two weeks in. The upgrade rate then rockets upwards to take the top spot at the end of September.

These metrics from Fiksu and Mixpanel measure the adoption rate of the active iOS install base, as they track any iPhones and iPads in use on the web.

Before iOS 10 was released, iOS 9 was installed on 88% of the active device base. Less than a month later, iOS 10 is already on the majority of iPhone, iPad and iPod touch devices. There are now more devies in use running iOS 10 than iOS 9. This is unprecedented uptake outside of Apple’s ecosystem.

The unusual spike two weeks after iOS 10 launch is difficult to explain, as it initially seemed like iOS 10 would lag behind iOS 9 for many months. Previous iOS updates do not feature the same ‘S-curve’ growth pattern. 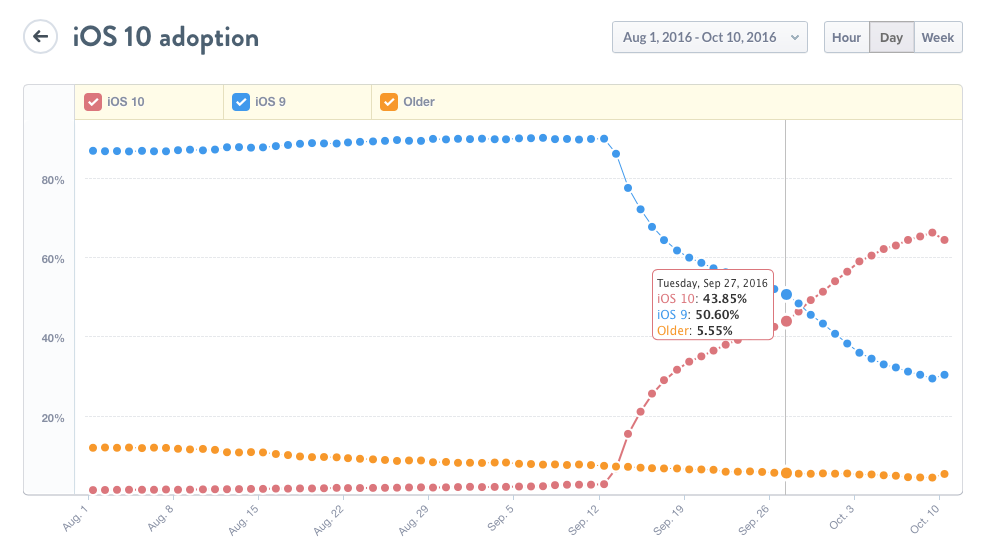 A flurry of new iPhone users unboxing their iPhone 7 and iPhone 7 Plus units probably contributed, which ship with iOS 10 preinstalled. Although Apple will have a sold many millions of iPhone 7 so far, it does not explain most of the jump, where iOS adoption increased 20% between September 27 and October 4.

One thing to consider is that Apple does not aggressively push customers to update to iOS 10 when the software ships. The initial influx of upgrades comes from people proactively visiting Software Update in iOS Settings and starting the update. Apple does sends notification for people that have not yet updated, but they are delayed by a week or more.

It is possible that Apple waited to send many iOS 10 update alerts until two weeks in. The release of iOS 10.0.2 on September 23rd will also have triggered fresh update warnings for users, which may have contributed to the sudden increase in adoption. Early update issues with iOS 10 may also have made people wait a few weeks before committing to the upgrade.

The next version of iOS 10, iOS 10.1, is currently in beta for developers and public beta testers and will be released by the end of the year. It includes several improvements, most noticeably adding a depth-of-field bokeh ‘Portrait’ mode for iPhone 7 Plus owners which takes advantage of the dual camera system.

If someone could explain the 2-weeks-later spike in iOS 10 adoption, I’d love to hear it. https://t.co/in4ixoP5MB pic.twitter.com/rFYwXqZVYc