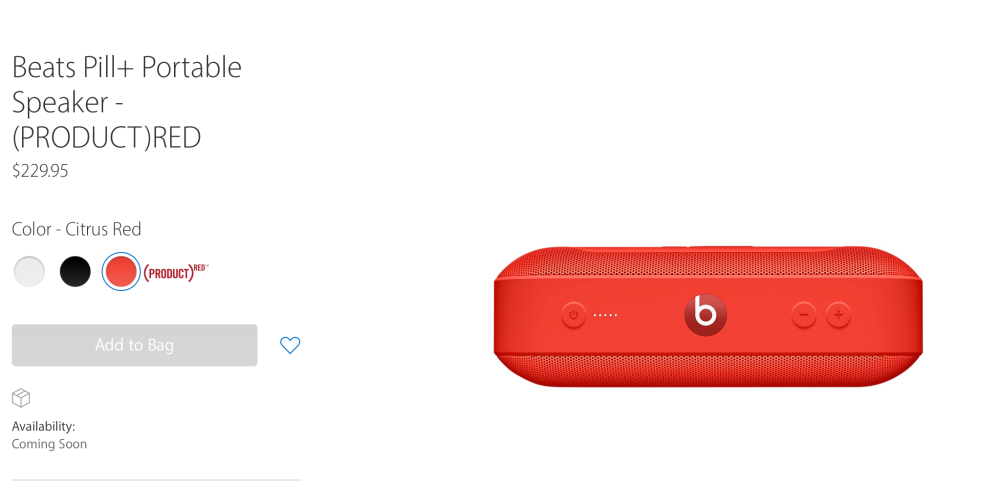 The price points for the (RED) offerings are the same as the normal color variants. The Beats Pill+ in the “Citrus Red” choice comes in at $229.95, while the Solo3 headphones come in at $299.95.

Apple has long partnered with the (PRODUCT)Red charity, originally offering iPods in the bright red color option. The charity works to raise awareness and funds to help eliminate HIV/AIDS around the globe. A portion of the proceeds from sales of (PRODUCT)Red devices goes to the global fund for fighting the disease.

In the past, Apple has also worked with the (RED) by donating a portion of total product sales on days such as Black Friday and Cyber Monday to the cause.

World AIDS Day 2016 will be held Thursday, December 1st and Apple has generally honored the day in the past. Last year, the company turned store logos red and heavily promoted (RED) products on World AIDS Day, something it has done in prior years, as well. Earlier this year, Jony Ive reflected on Apple’s participation in the (PRODUCT)Red campaign, noting of the 10-year anniversary of the fight.

It’s unclear when the (RED) variants of the Beats Pill+ and Solo3 headphones will be available, but it will likely be sooner rather than later. When available, the products will be for sale online and in Apple retail stores.