Foxconn discussing expansion of U.S. operations, possibly worth $7B and 50k jobs 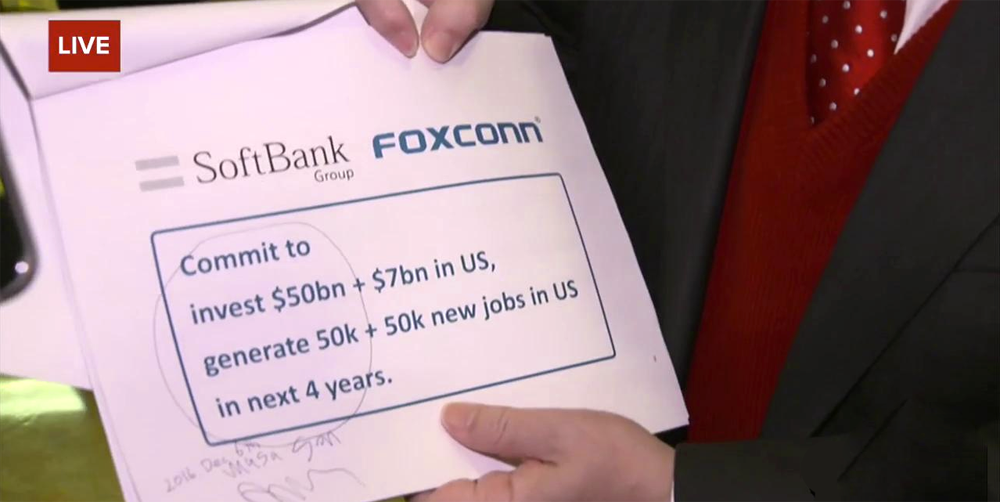 iPhone assembler Foxconn has confirmed that it is in preliminary discussions regarding expansion of its U.S. operations after a CNBC report showed a slide seemingly suggesting an investment of $7B and the creation of 50,000 new jobs within the USA.

The news report focused on Japanese company SoftBank pledging to invest $50B and create 50,000 jobs in the USA. However, a slide also showed a Foxconn logo on the right together with reference to an additional investment and extra jobs. The obvious inference is that the numbers on the right refer to Foxconn …

Foxconn later issued a statement confirming that it was discussing U.S. expansion, but not commenting on the numbers, reports Reuters.

While the scope of the potential investment has not been determined, we will announce the details of any plans following the completion of direct discussions between our leadership and the relevant US officials.

Foxconn currently has manufacturing facilities in Virginia and Indiana, together with logistics operations in California and Texas. SoftBank head Masayoshi Son and Foxconn founder Terry Gou work closely together on several joint ventures.

Trump made campaign promise to ‘get Apple to start making their computers and their iPhones on our land, not in China’ – an idea rejected by Tim Cook and described by industry figures as impractical. It’s not known whether Foxconn’s plans relate to production of Apple products.

President-elect Trump claimed credit for the $50B SoftBank investment, tweeting that the company ‘would never do this had we (Trump) not won the election,’ but the Dow Jones said that it would in fact be part of a $100B investment fund announced prior to the election. SoftBank is the majority shareholder in Sprint, prompting speculation that it may make another attempt to merge with T-Mobile after earlier plans were abandoned due to antitrust concerns.