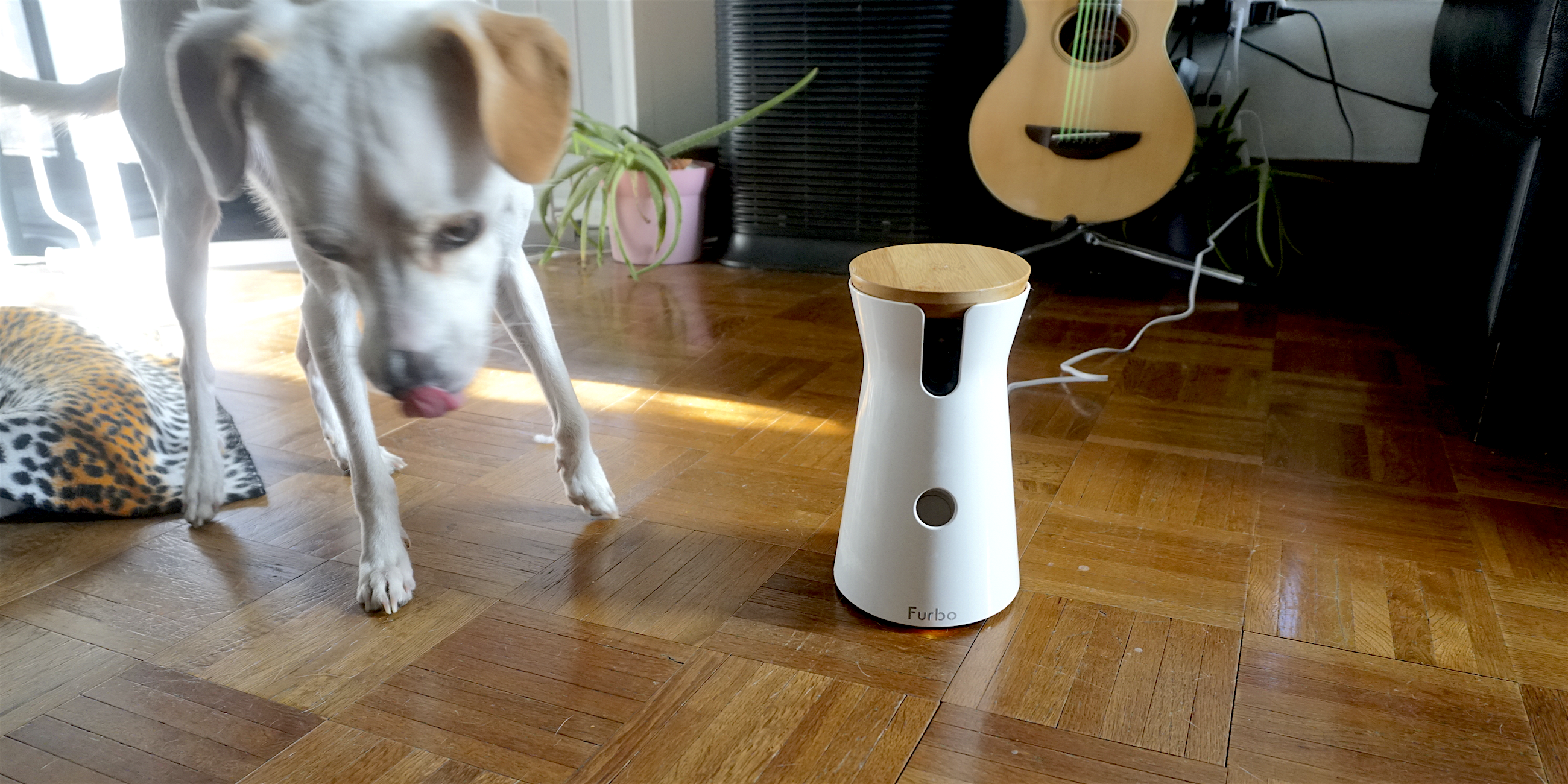 Furbo is a camera made specifically to spy on your dogs, talk to them, and dispense treats from your iPhone or Apple Watch. It connects to your Wi-Fi, which means you can control it remotely to watch, reward, and talk to your pets from wherever you are. Is it worth the cost of entry for the treat dispensing features alone, or are pet owners better off with a serious security camera solution?

Setup is painless. Everything is inside the unit itself, which measures 5.91 x 8.8 inches tall, so a single power cable is all you need to plug in. You can optionally use pre-applied 3M adhesive pads on the bottom to stick it to the floor and prevent your dog from potentially tipping it over.

Bluetooth pairing makes things easy for the app to quickly recognize the unit, and from there you just have to enter your Wi-Fi network details for the Furbo to connect (you can turn off Bluetooth on your phone once the initial pairing/setup process is complete). 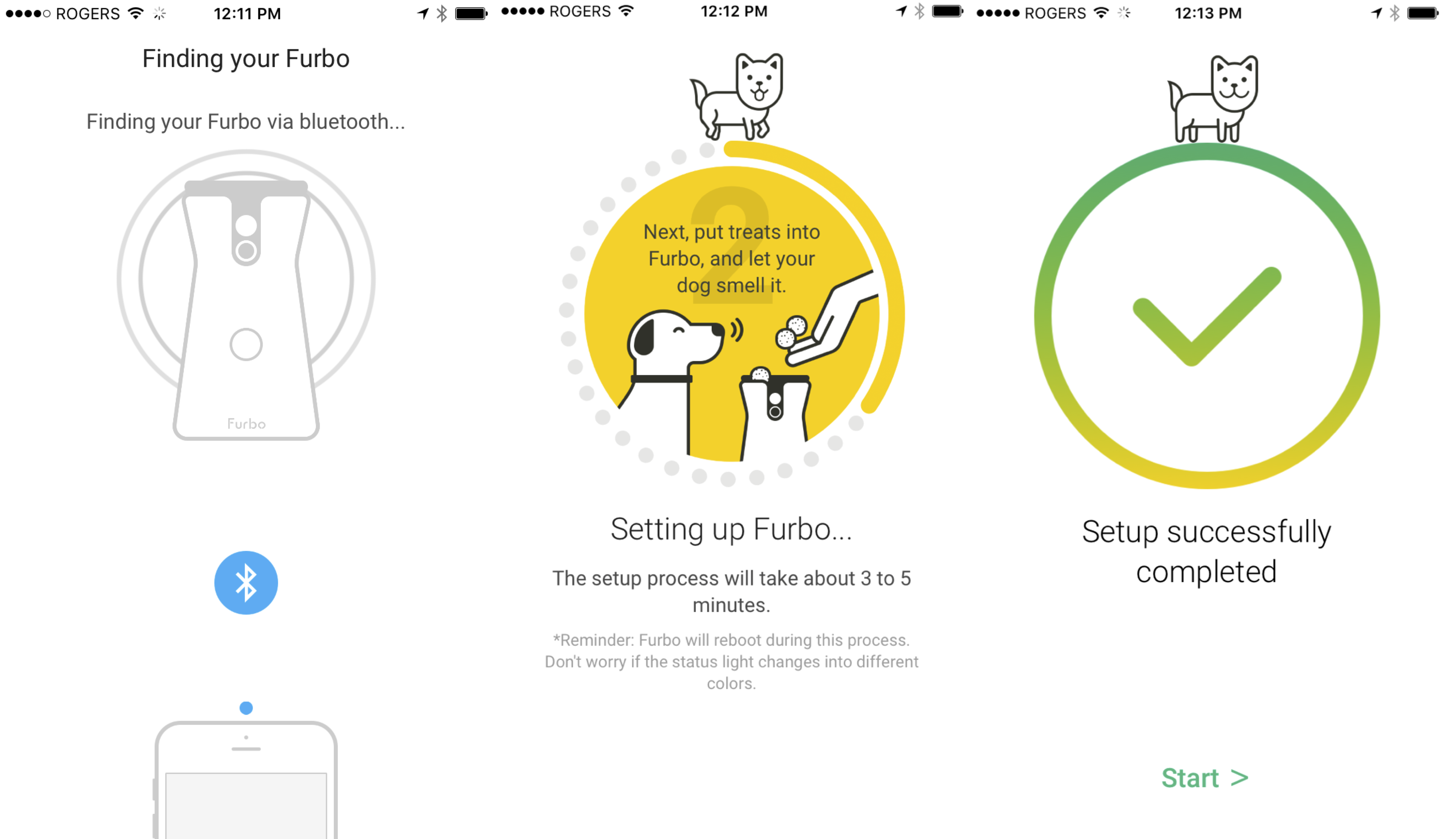 It’s marketed mostly for dogs it seems, but it also attracts and seems suitable for houses with cats with couple caveats– it doesn’t include a laser toy or any other cat-specific functions like some other products on the market, and Furbo will often dispense too much when using very small cat treats.

Once setup, Furbo works with a companion app available for iPhone and Apple Watch.

The main interface of the app lets you view the live camera feed, which offers 720p HD video streaming and a 120° wide-angle view. It also includes night vision, and you can pinch to zoom in. You can tap a mic icon to speak, or quickly capture a photo or video, and a press of the center button dispenses a treat.

The unit itself has a mic and a speaker, so you’ll be able to both talk and hear your pets via the camera feed. I had the odd connection issue where the camera would lag behind a bit or a take a few seconds to catch up, but it didn’t impact the overall experience much when tuning in for short periods of time or to dispense a treat. The mic and speaker aren’t great, which you can get a taste of in the video below, but it’s good enough to attract your dogs and hear what they are doing. 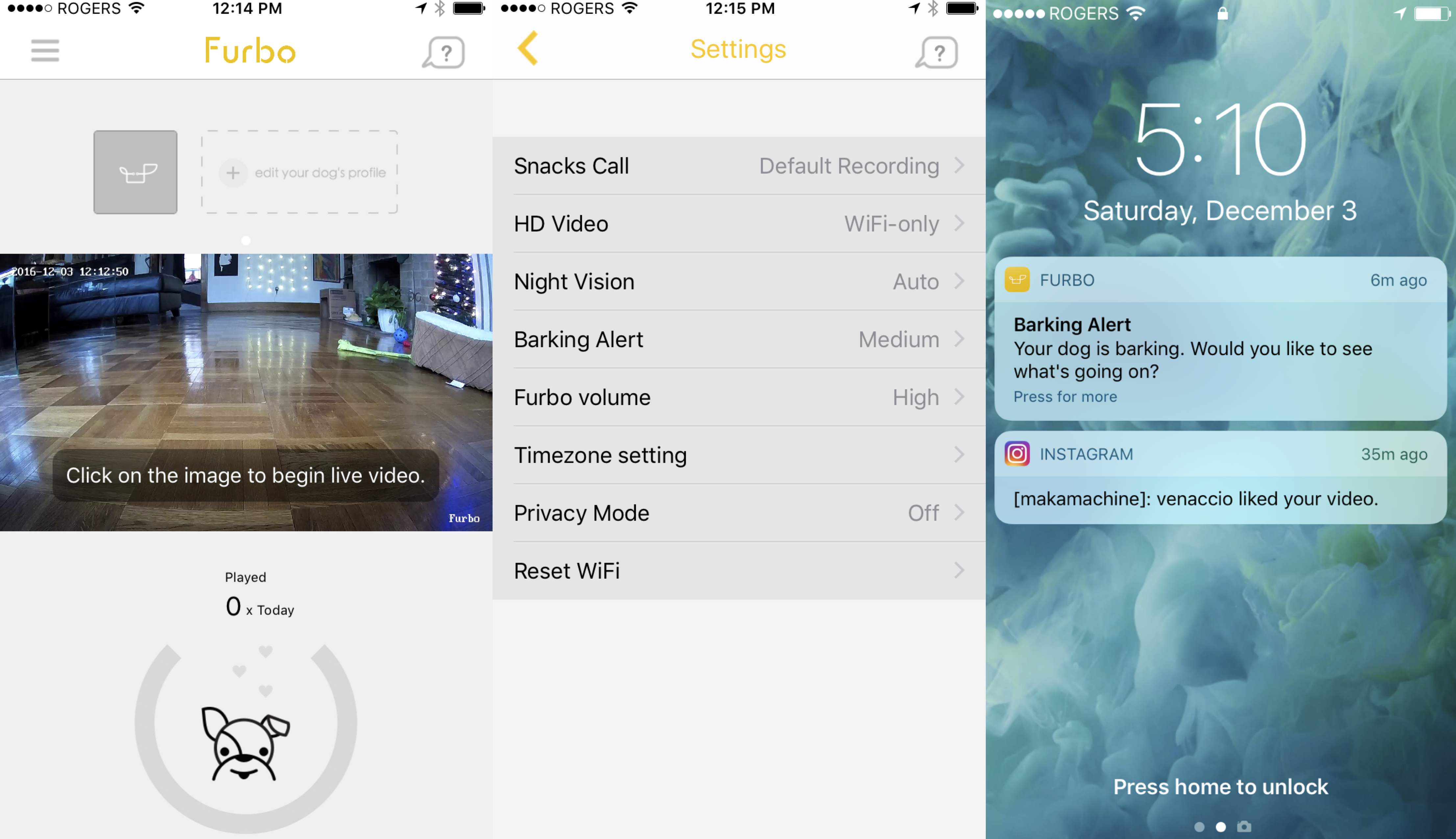 The app also offers up “barking alerts” in the form of a notification on your iPhone when the Furbo’s mic detects noise from your dogs. The idea here is you’ll be able to tune in when your animals are making too much noise or over stimulated for some reason, allowing you to talk to them and or offer a treat to calm and quiet them down.You can adjust the sensitivity of the dog barking alerts, but for me they seemed to work quite well on the default medium setting with only the odd false alarm.

While you can snap a photo or record a video as mentioned above, the camera doesn’t otherwise record or store video history in any way like security cameras.

You can also record a custom call out that plays when you dispense a treat, allowing you to call your dog’s name to attract them if the sound of the machine doesn’t already. On that note, the sound of the mechanism that dispenses the treat is a bit louder than I anticipated, which you can hear in the video above along with the pre-recorded call out, and it’s loud enough that it scared one of my three dogs from going anywhere near it. If your dog is skittish and particularly sensitive to strange or sudden noises, that might be an issue for the treat dispensing. The purple tint on the video seems to be the night vision feature reacting to my colored Christmas lights. Normally it looks more black and grey when used in pure darkness. 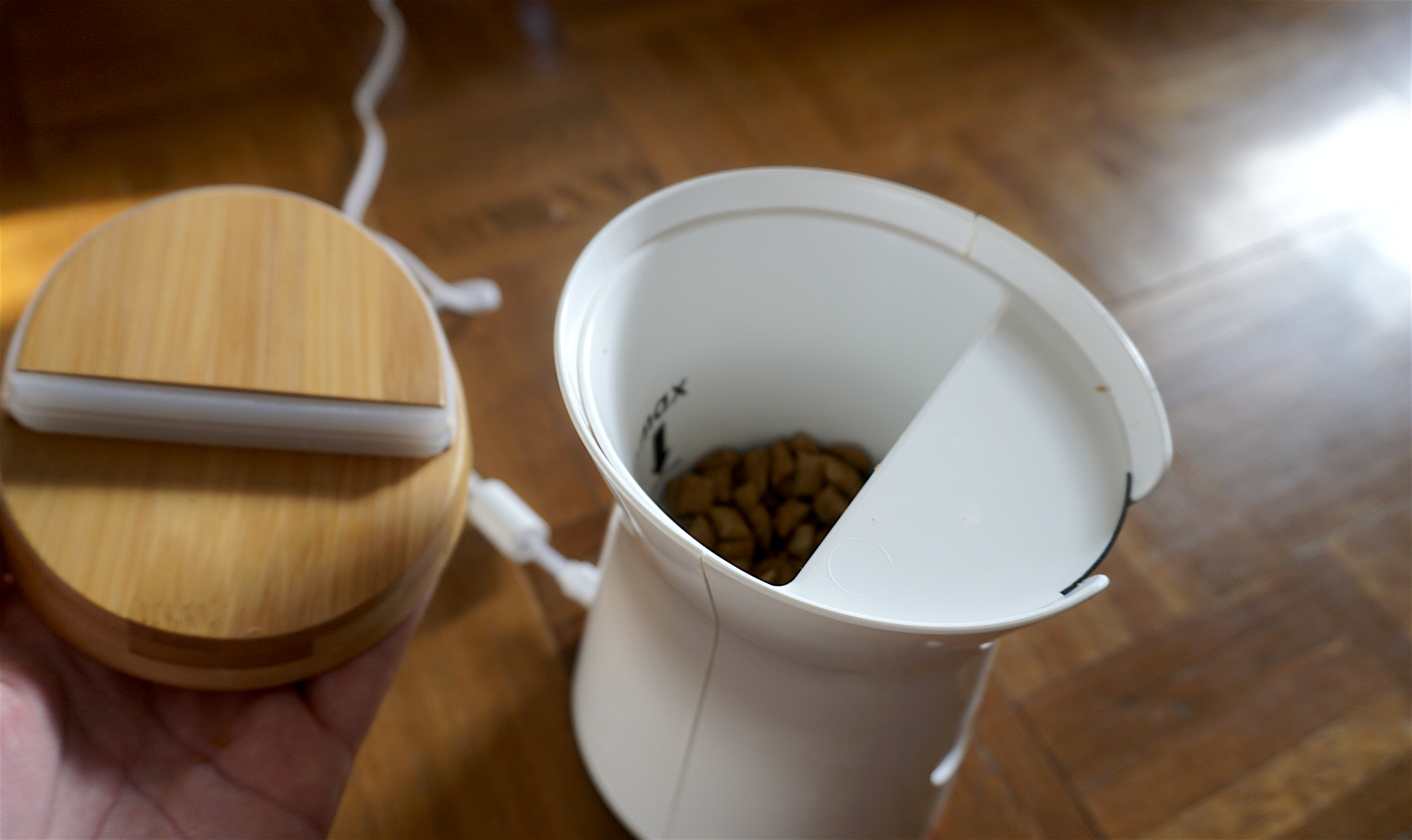 You’ll also notice that sometimes it shoots out two, three or more treats at once, and when it gets low on treats, there is the off chance it will fail to load one when you press the button, but those quirks were far from deal breakers. If you use very small cat treats like these, it will often shoot 5 or more at once, which might not be ideal and possibly why it’s not marketed for cats in addition to dogs.

Here’s a look at the Apple Watch app:

For mostly being marketed as a fun way to keep an eye on your pets, the hardware itself is built-well and I particularly enjoyed the design that you’ll notice includes a solid bamboo wood top cap for where you load up treats. The lid doesn’t have a lock but rather a pressure-fit, so it is possible larger dogs could get it off if determined. That was a never an issue for me, and the 3M adhesive pads on the bottom will prevent them from tipping it over. 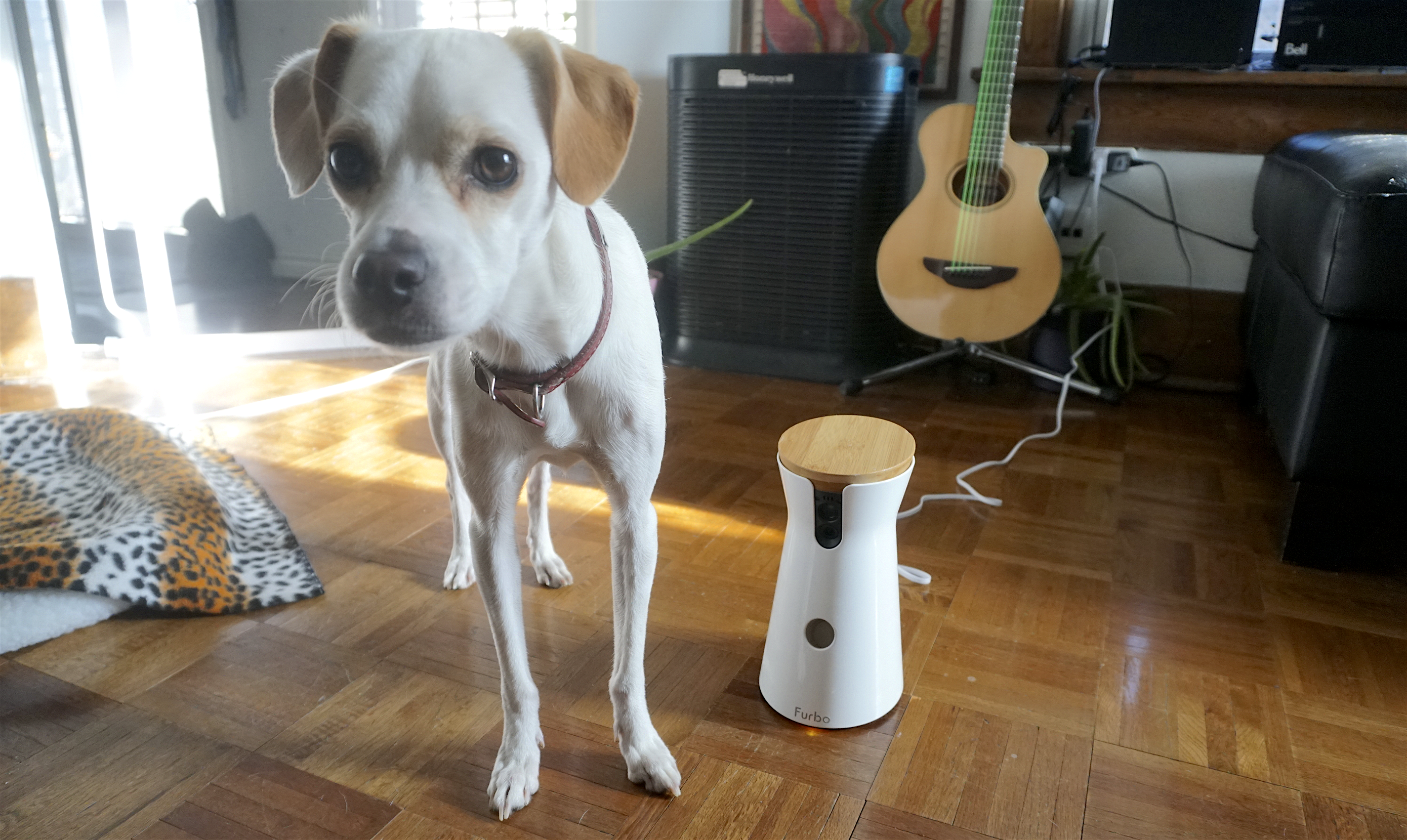 The container on the Furbo only holds a handful of medium to small size pebbles or treats, more than enough to keep your pets satisfied for any amount of time you’d leave them unattended, but not really an issue if they do happen to get into it.

While it might look like one, it’s not really a security camera replacement. If you can put up with $186 price tag (on sale), this is a fun experience and works well for keeping an eye on your pets and rewarding them when away from home. It’s also likely you won’t be positioning a normal security camera specifically to watch your dogs, but with this you can put it in the main living room or area they spend the most time when you’re away. And it also serves as entertainment for playing with the dogs and cats from the couch or another room. If you don’t need the treat dispensing feature specifically, however, other security cams, like Canary and Nest Cam, offer a similar design and price point with overall superior security camera features.