iOS 10 now installed on 76% of active devices, according to Apple’s stats

Apple has updated its iOS 10 usage statistics, which tracks the operating system version used by iPhone, iPad and iPod touch devices that visit the App Store. The company now says that more than three quarters of the iOS device user base are running iOS 10, at 76%, with iOS 9 sitting at 18%.

This is an increase of more than 13 percentage points since the chart was last updated in late November. Apple has previously said that iOS 10 had the highest adoption rate ever of any release.

iOS 10 debuted on September 13, 2016 with many new features including a revamped Messages experience, iMessage apps, redesigned Maps and Music, a new Home app and much more. An adoption rate of 76% in under 4 months is very impressive and bests the record set by iOS 9.

Apple’s chart shows that iOS 9 continues to be used by 18% of the iOS base with 6% on iOS 8 or older. Stale devices make up the majority of these percentages; older Apple hardware that cannot update to iOS 10.

Apple does not breakdown usage of the point releases beyond the major versions; the latest release of Apple’s mobile operating system is iOS 10.2. iOS 10.2.1 is currently in beta and Apple is rumored to start seeding iOS 10.3 for testing as soon as next week. 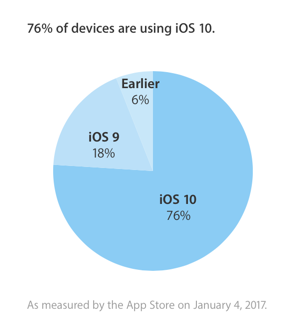