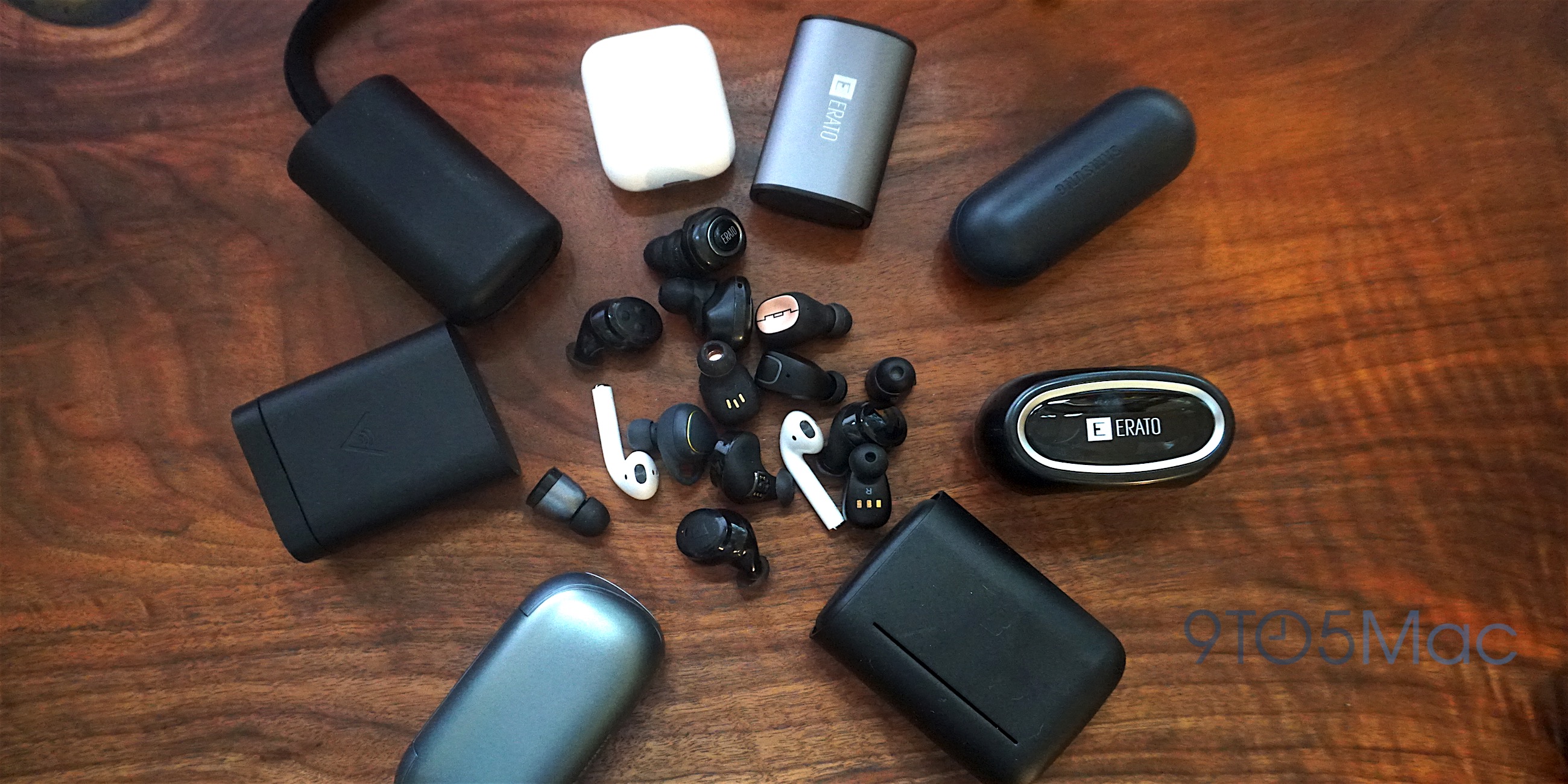 In the lead up to Apple’s release of AirPods late last month, I had tested just about every pair of cord-free earbuds already on the market. But now that AirPods are here and I’ve been using them daily for an extended period of time, the difference is even more striking than I anticipated.

With AirPods, Apple has done what it does best: taken an emerging product category with a frustrating user experience and delivered a polished product made possible by its control over both the hardware and software. And the AirPods are one of the best examples of that in a long time.

But is there any competition or even a decent alternative?

The fit of AirPods was always bound to be a topic of controversy. Since they don’t have silicone or flexible tips like most competitors, which allows a certain level of customization and a particularly snug fit, they won’t work for everyone. And if they don’t fit, the rest doesn’t really matter.

A lot has been made about the stem on AirPods that hangs down out of the user’s ear. Aside from housing the microphone closer to the mouth and giving some extra space for components in general, this gives AirPods another really big advantage that not many have mentioned. The charging contacts aren’t inside of the ear, which is a major downfall for the majority of competitors…

I originally had hopes of using a pair from the competition as my new daily driver earbuds, replacing my wireless Jaybird earbuds that I’ve enjoyed for several months now, at least until I had a set of AirPods to compare side by side. That didn’t happen.

Sol Republic’s Amps Air ($179) have great sound and for bass lovers beat out the AirPods. But they were way too bulky for me personally and ideally need to shave off about 20% in overall size before they can compete. And when weight and bulkiness wasn’t an issue– like with Skybuds and Bragi’s The Headphone— exposed charging contacts irritated my skin and caused discomfort over extended periods of use.

I had a lot of recommendations to try out Erato’s Apollo 7 buds ($249) following my previous reviews. They offered a comfortable fit and are the only non-AirPods option without charging contacts touching the skin, but the bullet-shape (opposed to the hearing-aid style of others) made them protrude in a way that both looked silly and felt a bit heavy in my ears. It’s not just the Erato and Bragi products, I had one or more of these issues with all 7 sets of cord-free earbuds I tested (full list below). The consensus on AirPods seems to be in: they fit better for more people than Apple’s old EarPods, and I found that to be true for my ears too…

Zac mentioned on a recent episode of 9to5Mac’s Happy Hour podcast that it seems to be the lack of a cord pulling downward that gives the AirPods a nicer fit for more people compared to Apple’s old wired EarPods that otherwise have just about the same physical shape. Thats not unique to AirPods, but it’s part of the reason it seems AirPods are overall getting a thumbs up for fit. For that reason I’d recommend trying them even if EarPods weren’t particularly comfortable for you. There is of course going to be exceptions to that. Everyone has different ears. For me they pass the shake test no problem and I’ve been using them for daily workouts.

There are also companies making accessories that might allow more people to find a comfortable and tight fit with AirPods, and I think there will be market for those. 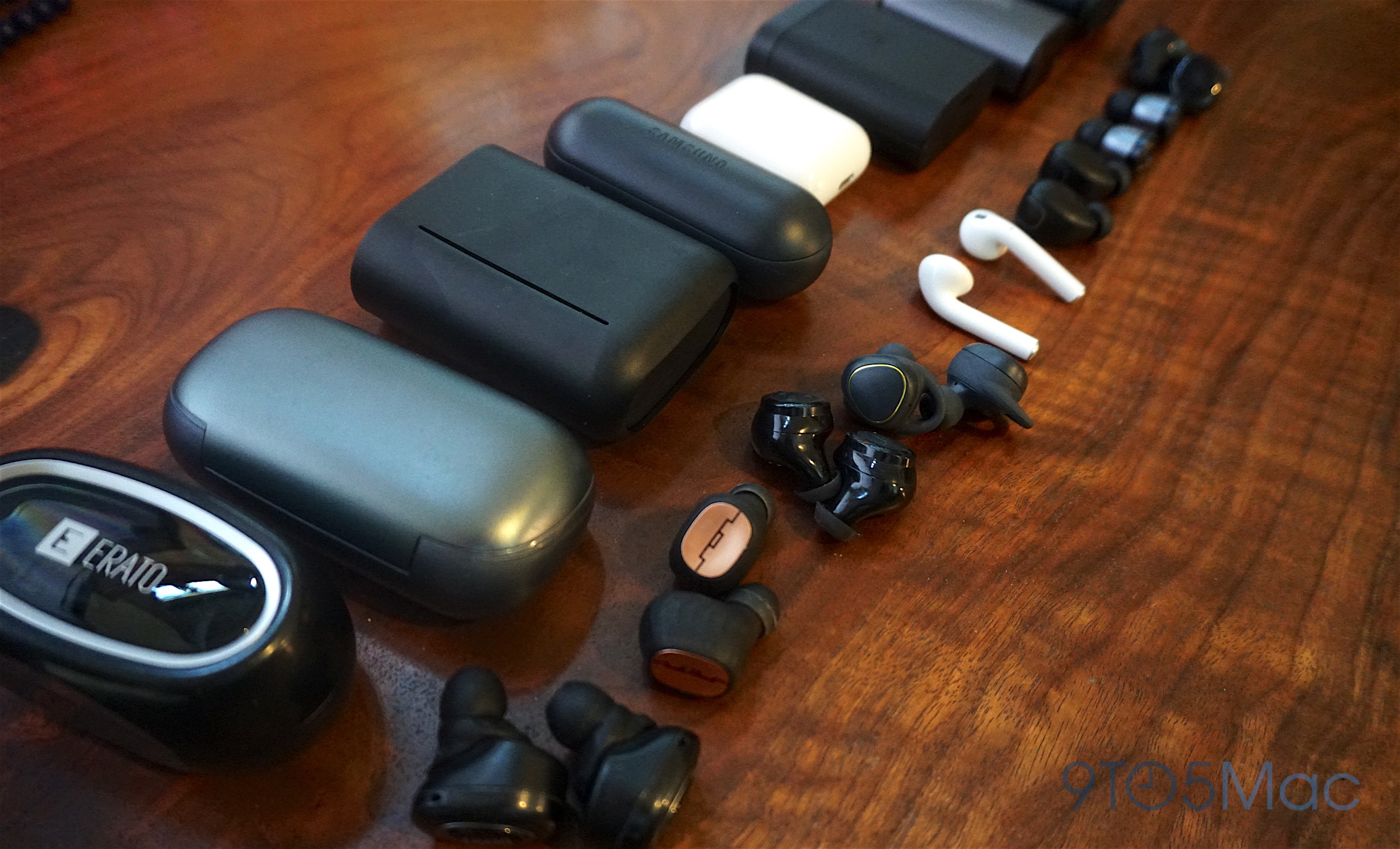 When I did find a decent fit, everything but AirPods was a nightmare for connectivity and pairing.

It became quite clear in my tests in recent months that companies were having a tough time with cord-free earbuds and getting the individual earbuds to both pair and deliver stereo sound reliably. This is where the AirPods shine and live up to Apple’s ‘it just works’ promise where the competition has all failed miserably to come up with a solution.

The experience is the same with everything but AirPods. Turn on your earbuds (some will automatically turn on when taken out of their case) and then navigate to Settings, Bluetooth and select the product from a list to initiate a connection. Some are supposed to automatically pair after you’ve done this process the first time, but none of them seemed to be able to do that reliably, and that was frustrating to say the least. 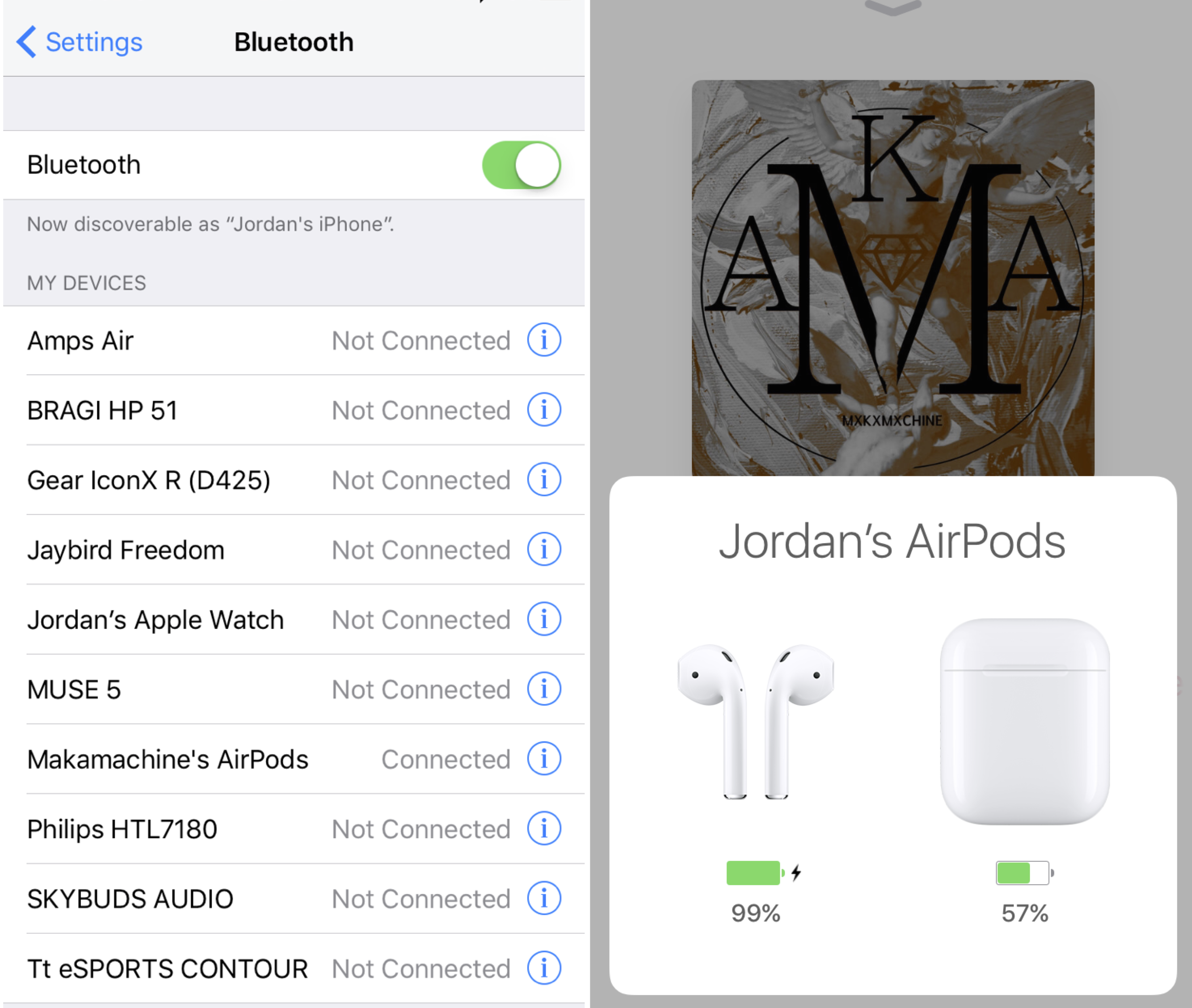 Erato’s Apollo 7’s would sometimes not deliver audio at all even though they’d appear as connected. Bragi’s The Headphone would sometimes deliver sub-par sound quality and require a reboot to fix. And Samsung’s and the rest almost never automatically paired reliably, requiring me to often cycle power on and off, fumble through Bluetooth settings, and swear a little while preparing to leave for my morning workout.

AirPods have none of these issues. Open the case, stick them in your ears, and start playing your music. Open the case at any time and instantly get a breakdown of remaining battery for the AirPods and charging case (as pictured above). Apple needed to build something it’s calling the W1 chip to offer this seamless experience, and it makes a world of difference. You can finally use cord-free earbuds as easily as your old wired headphones, as long as you remember to charge them. 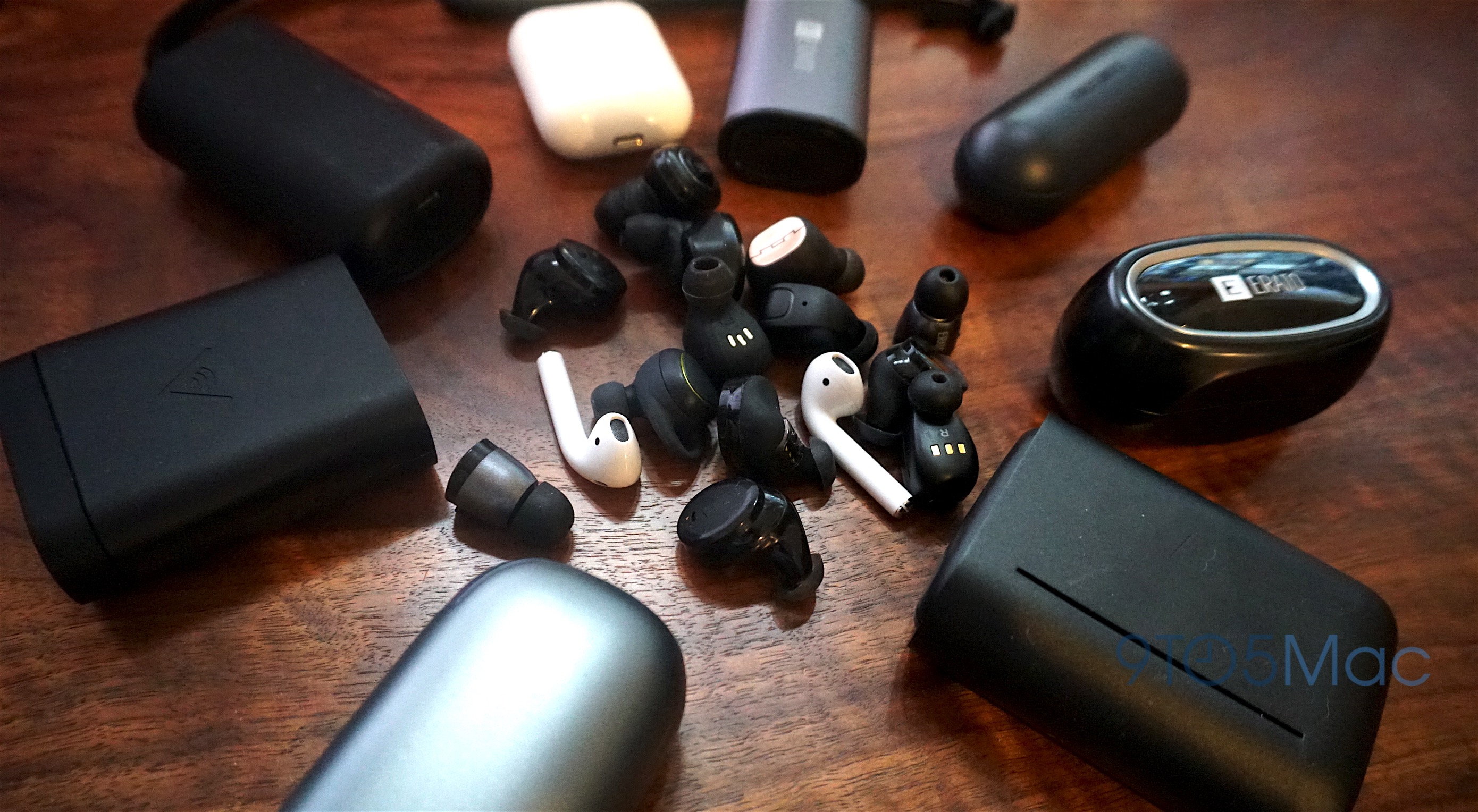 The Skybuds and Bragi’s The Headphone both seemed promising but I eventually stopped reaching for them due to a mix of not-so-great sound quality, the exposed charging contacts mentioned above, and frustration with the pairing process among my devices.

An important thing to note: the sound quality issues with the earbuds I tested weren’t always due to low-quality components necessarily but seemed to be tied a lot to Bluetooth connectivity problems and fit. The Bragi Headphone is capable of sounding half decent, but I found the experience to be rather inconsistent. I’d often have to readjust the earbuds several times to get a fit that allowed them to sound decent, and sometimes I’d get low quality sound at first until turning off and then repairing. I experienced those issues with the Skybuds too.

I was mostly reviewing these products for the headphone experience, so mic quality was never a make or break feature for me. I would describe call quality as poor to passable for most of the earbuds I tested, but AirPods offered noticeably clearer call quality compared to the top of the line competition. It’s still not something I’d rely on for important calls in noisy environments, but it’s another win for the AirPods.

The sound on the AirPods is nothing to brag about, but it’s solid and consistent enough that they at least get a passable grade for a recommendation. Sol Republic’s Amps Air are the only option that had noticeably bigger bass and fuller sound than AirPods, and they needed a much bulkier design to achieve it. If you are waiting for audiophile quality sound in cord-free earbuds, they simply don’t exist yet.

Wow. Just look at the AirPods charging case next to the competition. I never truly realized just how small this thing is— it’s not much bigger than the AirPods themselves— and that doesn’t mean it’s lacking any features that the other guys have. The case charges your AirPods a handful of times, giving you around 24 hours of listening time before needing to plug-in. That’s as good and in many cases much better than all of the competition. The charging case turned out to be one of the most impressive aspects of the AirPods after getting my hands on them and comparing to what the competitors came up with. The size is a big deal considering the point of the case is to carry it around with you. Apple’s is easily pocketable. The competition? Not so much.

My time with AirPods doesn’t come without a few complaints, but those mostly fall into the nitpicking category for now as they haven’t prevented me from using the product daily. And my complaints and feature requests— things like lack of volume control without Siri and no offline Siri support for basic functions— seem like no-brainers for Apple to add in future iOS updates. 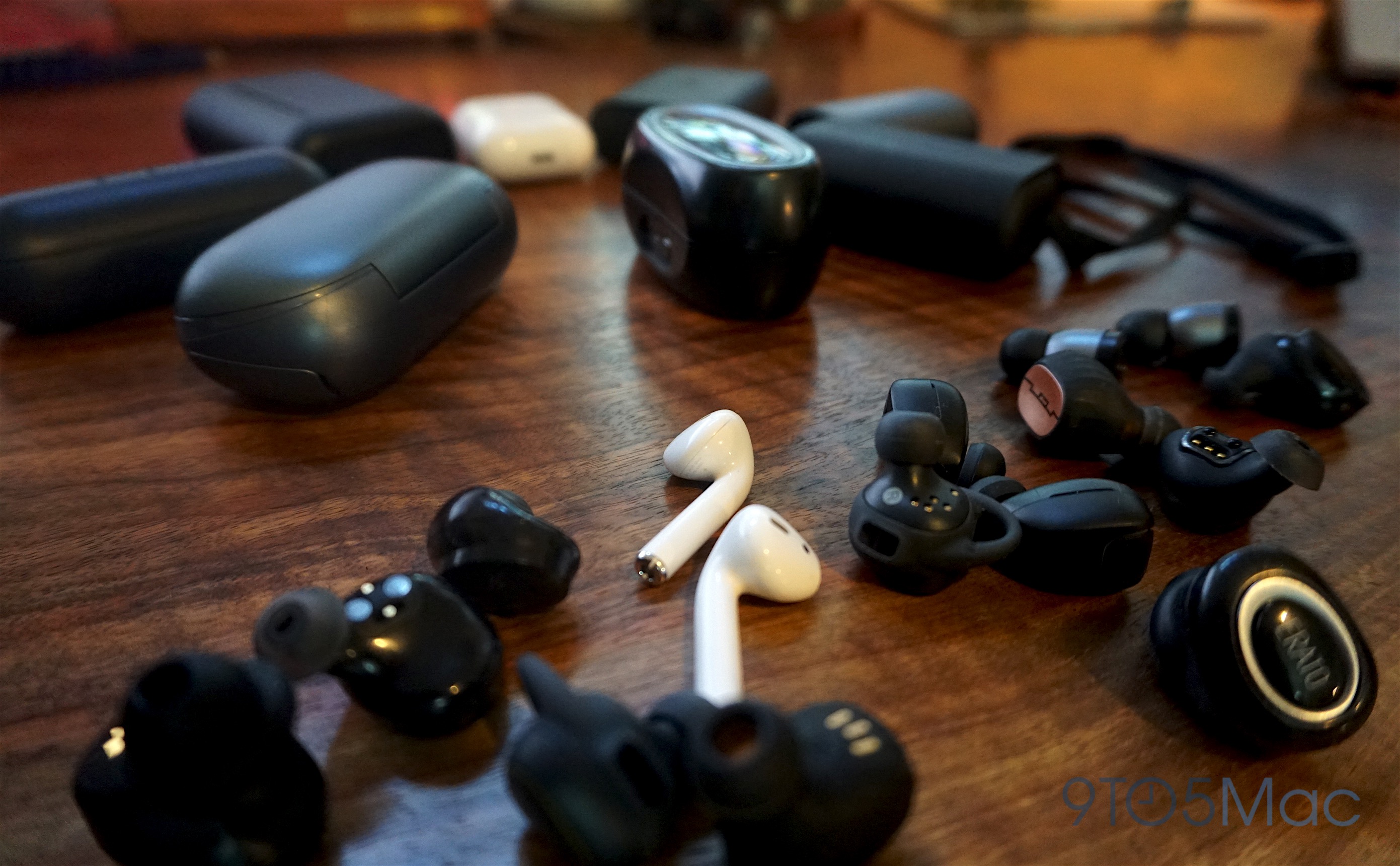 But if AirPods don’t fit, what do you go for? If they must be cord-free, Samsung’s Gear IconX buds for me and handful of people I tested with offered the best fit in the most compact form factor that looked decent in the ear. A soft matte rubber material over the entire earbud makes them particularly comfortable in the inner ear, and small hooks are positioned to lock them-in for extra security. But I still found the charging contacts to irritate my inner-ear with use over extended periods of time, which is something you’ll have to test for yourself. They sounded a bit dull compared to Apple’s AirPods that are in contrast a bit tinny but much better sounding.

Unfortunately you will miss out on many of the other upsides of AirPods if you don’t have headphones with the W1-chip. But in my tests Samsung’s Gear IconX offered the best alternative for both fit, style, and sound quality if AirPods are an absolute no-go due to fit.

You could also try using AirPods with a rubber ear hook attachment for a better fit, and there are strap attachments for those really worried about losing one. Or look to wireless Bluetooth W1 options with cables like the Beats PowerBeats3 and upcoming BeatsX if cord-free isn’t a must have for you right away.

But what about CES taking place in Las Vegas this week? Surely there are a number of promising competitors being shown off? Nuheara is showing off its IQ buds ($299) that are still on preorder for Q1, Earin has $249 buds with not-so-great 3 hours of battery that also aren’t shipping, and both don’t do much to shake the hearing-aid look of the current competition. So no, not really.