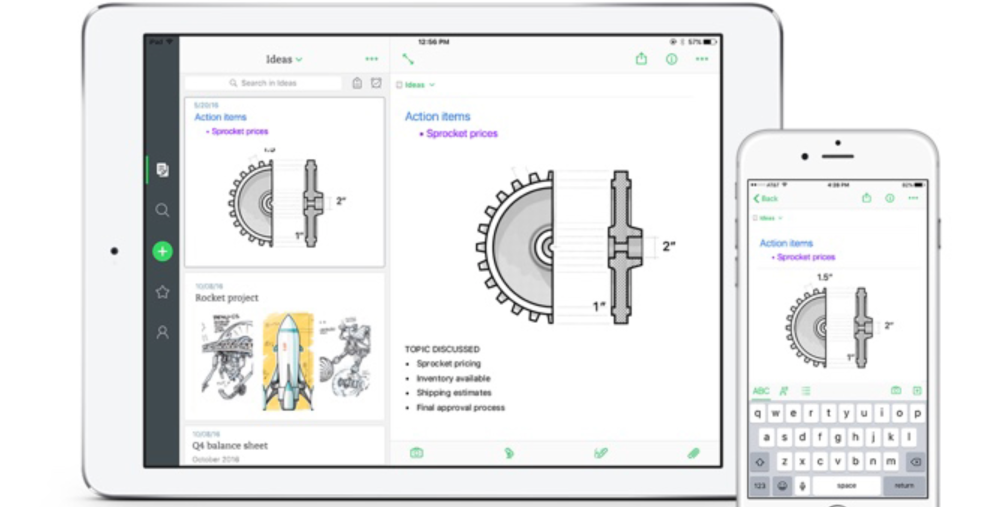 Evernote today announced a major update to its iOS app that brings a variety of new organization features. Bringing the app to version 8.0, the update makes it easier to find existing notes, create new notes, add colors and styles, and more…

First off, the update makes it quicker to find existing notes. The update removes the app’s home screen, meaning you have immediate access to your most recently updated notes. “This way, you can start working from where you last left off,” the company says.

You’ll also notice that the app has a fresh, new look. Even your note list has been spruced up so you can scan through your notes more quickly. Devoted notebook fans will also love the way Evernote 8.0 makes it easy to dive in and out of notebooks to find notes. Simply tap the notebook selector above any note list to jump into another notebook.

The app’s overall interface has been refreshed, as well. In addition to a new coat of paint, there’s a new notebook navigation tool, making it easier to switch between notebooks and find notes. Tapping the alarm clock at the top of any note brings up all of the notes you’ve set up with reminders, as well.

Additionally, today’s update makes it easier to create new notes. Now, you can simply tap the green “+” button at the bottom of the display, Simply tapping it will instantly create a new note, but if you slide your finger up on the “+,” you can create a new audio file, photo, or reminder.

Sometimes, plain black text isn’t enough. Evernote 8.0 gives you more ways to style your text. Use different colors and sizes to create headers and subheaders, call attention to key points, or make it easier to recall information. We make it easy by offering several pre-defined text colors and font sizes for you to choose from.

For Evernote Business customers, today’s update makes it easier to decipher between personal and professional notes, while it’s also easier to switch between accounts.

Evernote’s major refresh comes after the company was embroiled in a privacy disaster, which the company itself attributed to a lack of clarification. Evernote eventually reversed the change after outcry from users, but switching to Notes is still an option…

Evernote is available on the App Store for free.