White House announces Office of American Innovation, says it is working with Tim Cook & others 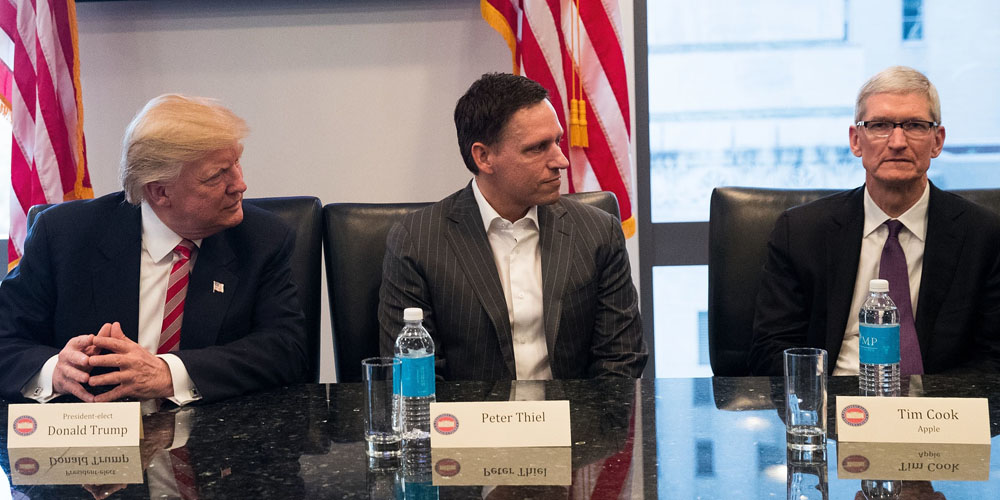 President Trump is forming a new team, known as The White House Office of American Innovation, which he says is intended to harvest ideas from the business world. Apple CEO Tim Cook is reported by the Washington Post to be one of the business leaders working with the team.

The innovation office has a particular focus on technology and data, and it is working with such titans as Apple chief executive Tim Cook, Microsoft founder Bill Gates, Salesforce chief executive Marc Benioff and Tesla founder and chief executive Elon Musk. The group has already hosted sessions with more than 100 such leaders and government officials.

The latter comment appears to reference a December meeting (above) at Trump Tower attended by Cook, Musk and other tech leaders …

Cook explained to employees that he participated in the meeting despite his disagreements with Trump because you don’t change things from the sidelines.

Personally, I’ve never found being on the sideline a successful place to be. The way that you influence these issues is to be in the arena. So whether it’s in this country, or the European Union, or in China or South America, we engage. And we engage when we agree and we engage when we disagree. I think it’s very important to do that because you don’t change things by just yelling. You change things by showing everyone why your way is the best. In many ways, it’s a debate of ideas.

Some of the executives involved have criticized some of Trump’s policies, such as his travel ban, but said they are eager to help the administration address chronic problems.

“Obviously it has to be done with corresponding values and principles. We don’t agree on everything,” said Benioff, a Silicon Valley billionaire who raised money for Democrat Hillary Clinton’s 2016 campaign.

The office is being led by Trump’s son-in-law.

The White House Office of American Innovation, to be led by Jared Kushner, the president’s son-in-law and senior adviser, will operate as its own nimble power center within the West Wing and will report directly to Trump. Viewed internally as a SWAT team of strategic consultants, the office will be staffed by former business executives and is designed to infuse fresh thinking into Washington, float above the daily political grind and create a lasting legacy for a president still searching for signature achievements.

It’s being suggested that the initiative is Trump’s attempt to pull himself back from his high-profile failure to replace Obamacare.

The announcement of the new office comes at a humbling moment for the president, following Friday’s collapse of his first major legislative push — an overhaul of the health-care system, which Trump had championed as a candidate.

One of the team’s goals is to provide broadband Internet service to every American as part of a $1T infrastructure plan.