In what is the first supposed leak of ‘real’ iPhone 8 technical schematics, an image posted to Weibo today claims to show technical drawings for the next-generation iPhone straight from Foxconn. The drawings depict an iPhone 8 front and back with minimal bezels on the left and right sides of the screen. Compared to an iPhone 7, the top and bottom bezels are also significantly smaller.

On the back, the dual camera system and rear flash is stacked vertically in the top-left corner, with a gap for a Touch ID fingerprint sensor below the Apple logo. The image is labelled with dimensions for the chassis, which are comparable to the 4.7-inch iPhone 7 — despite the significantly larger screen …

As shown in the table, this is supposedly an image of design drawings for the iPhone 8’s Engineering Validation Test third revision. EVT is an early stage in the Apple product development cycle, the device must still pass through Design Validation Test and Production Validation Test stages before it is finalized.

This is to say that all the design choices in the schematics shown here are not necessarily locked down. We’ve been hearing a lot about the Touch ID home button, Apple is apparently juggling different designs with the aim to have the fingerprint sensor integrated into the display, under the glass.

If this is the case, EVT03 is likely a fallback design, ready in reserve, which simply puts that sensor on the back. 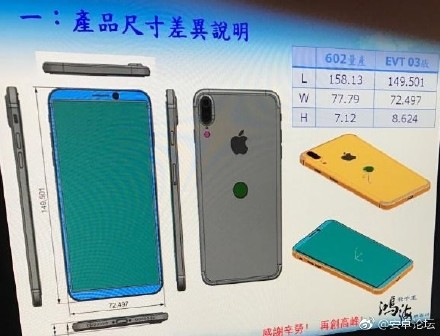 The iPhone 8 drawings are annotated with dimensions which back up claims from KGI that the device would be about the same physical size as the 4.7-inch iPhone 7, featuring a much larger 5.8 inch OLED screen by shrinking the bezels.

From this drawing, the iPhone 8 device is measured at 149 mm tall, 72.5 mm wide and 7.1 mm thin (excluding the dual camera thickness, which still protrudes). To compare, the iPhone 7 is 138 mm tall, 67.1 mm wide and 7.1 mm. If this leak is to be believed, the device will be the same thinness as the current phone and about one centimetre taller.

It’s worth noting that the general design here mirrors a sketchily sourced mockup we saw a couple of weeks ago, that also placed the Touch ID ring on the rear side and had similar screen bezel proportions. As with all Weibo leaks, we have to take care in believing anything at face value.

That’s not to say Weibo hasn’t turned up the goods in previous years; schematics of the iPhone 6 and iPhone 7 all leaked by mid March in their respective years.

Apple is widely rumoured to be introducing three new iPhones this year, two iterative updates with the same chassis as the iPhone 7 and iPhone 7 Plus, and one major revamp. This latter device is what is pictured above, the ‘iPhone 8’ or ‘iPhone Edition’ or ‘iPhone Pro’ or whatever, and will apparently feature a 3D sensing front camera, wireless charging, 3 GB RAM, 521 PPI display and more in addition to the new external design. All three models are expected to be officially announced in the fall.