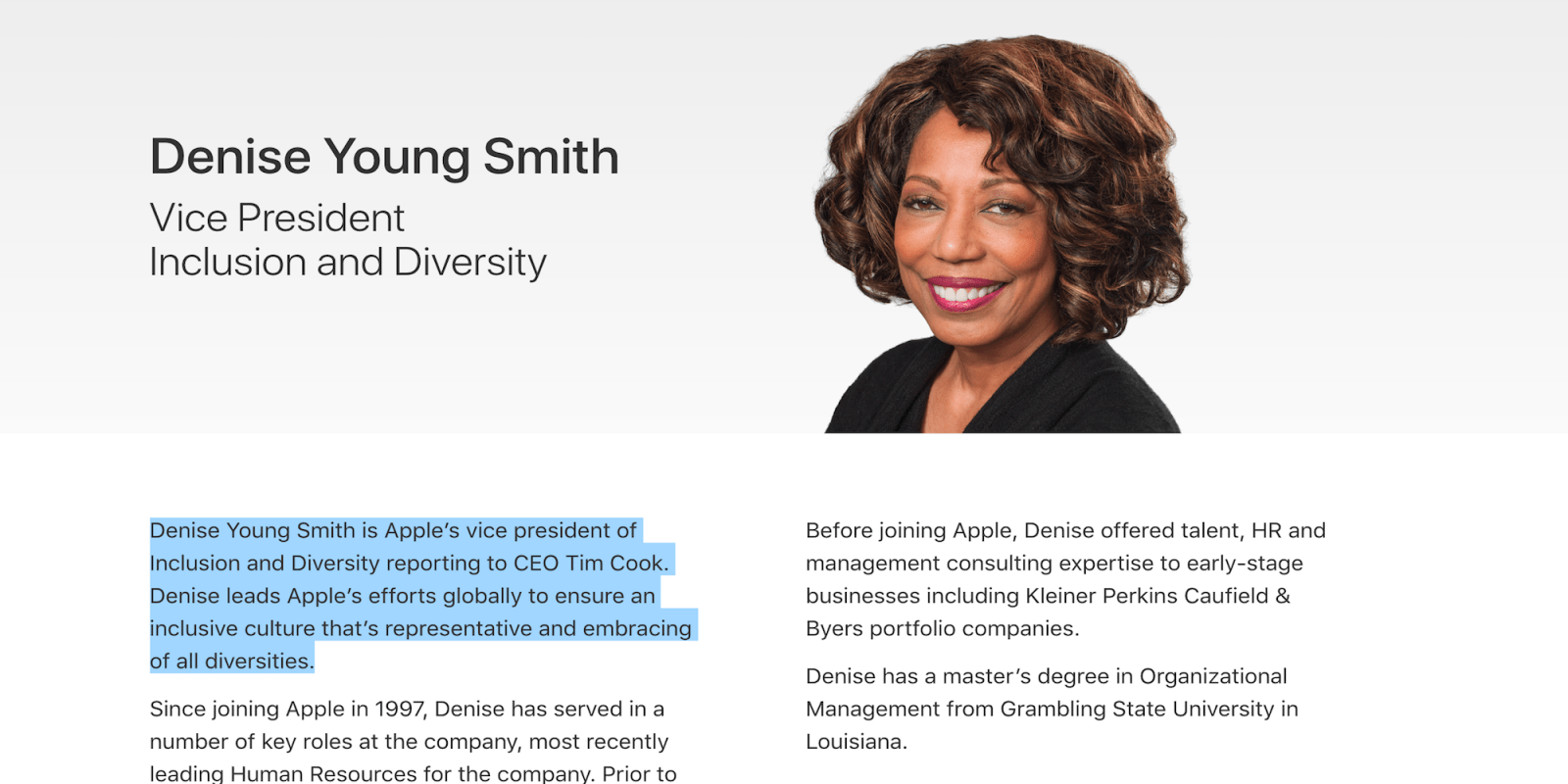 “Our inclusion and diversity efforts are critically important to Apple’s future. Denise’s years of experience, expertise and passion will help us make an even greater impact in this area.”

Apple’s head of Worldwide Human Resources Denise Young Smith will now run diversity programs for the company under a newly created VP position, according to sources familiar with the move. The executive shuffle will see the creation of a new VP role for Apple’s Inclusion and Diversity team with Smith reporting directly to CEO Tim Cook. Sources say Smith has long had a passion for diversity initiatives at the company and the newly created position reflects an increased focus on the company’s efforts.

Smith’s new role going forward at Apple will officially be Vice President for Inclusion and Diversity. She confirmed the new title today on her LinkedIn profile and the change has also been made official at Apple internally.

Denise Young Smith is Apple’s vice president of Inclusion and Diversity at Apple. She reports to CEO Tim Cook… Since joining Apple in 1997, Denise has served in several key HR roles. Most recently as Vice President of Worldwide Human Resources and Talent.

Sources say the position will mean Apple will be without a permanent VP of HR as Luca Maestri, the company’s SVP and CFO, steps in to fill the role temporarily.

In recent years Smith has been in the media to address issues of diversity at Apple and also relayed diversity news to employees, and she’s been involved in running the diversity programs before her official title change. Apple’s previous head of diversity and inclusion Jeffrey Siminoff held a director role from 2013 until January 2016 before leaving to Twitter. He reported to Denise who reported to Tim Cook, but now the Inclusion and Diversity team headed by Smith will report directly to Cook, making the new VP position the first to do so.

Smith has been at Apple for over 20 years and was first promoted to VP of worldwide HR back in 2014 from her previous role as head of HR for just Apple’s retail stores, a role that Steve Jobs handpicked her for during the early days of Apple’s retail efforts. She replaced Apple’s then HR head Joel Podolny who switched to focusing full-time on developing Apple University. Prior to that she served as Senior Director of Human Resources for Worldwide Operations and Corporate Employee Relations at Apple from 1997 to 2000.

Apple first started publicly reporting diversity data in its annual Diversity Report back in 2014 and released its latest report last August. Since then it has launched a number of initiatives as CEO Tim Cook continues to be outspoken on various topics publicly. Earlier this year Apple reportedly resisted a shareholder proposal to boost diversity at board and senior management level, but it’s clear the company isn’t standing still and has its own plans to increase efforts as it introduces the new position for Smith.

Apple has yet to update its Executive Profiles page where Smith is currently still listed with her old HR position (Update: Denise’s new role and bio now listed).