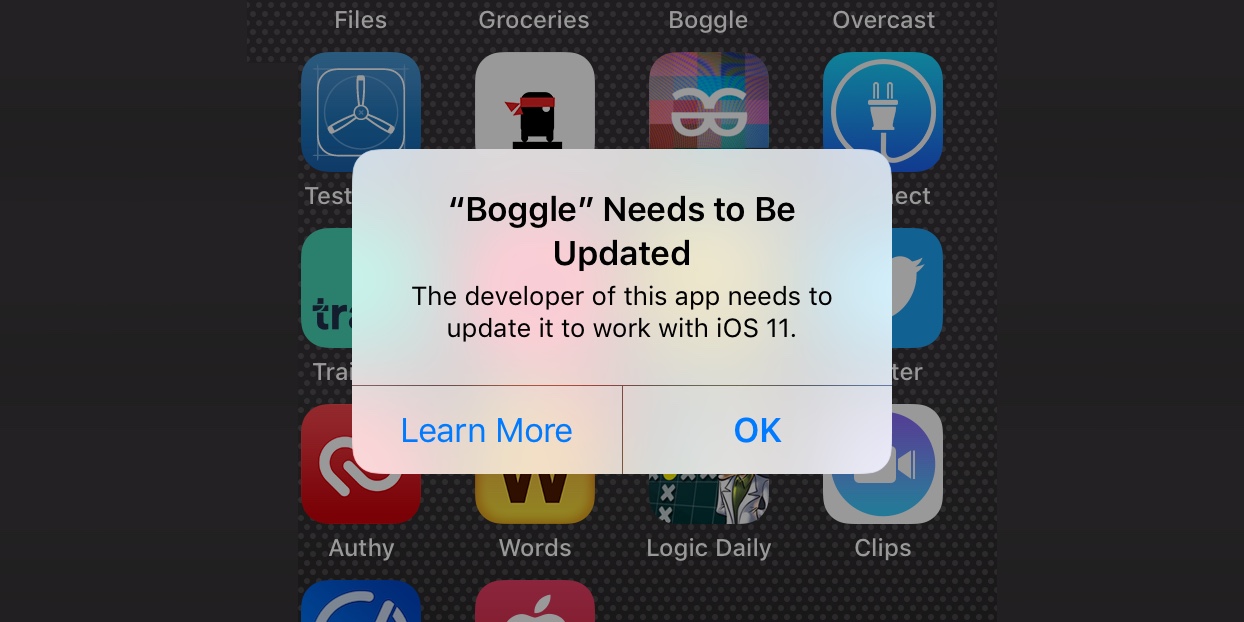 As Apple warned users with iOS 10.3, iOS 11 officially drops support for 32-bit applications. Any 32-bit app will refuse to launch and instead show an alert pressuring the developer to release a 64-bit update. Older iPhones and iPads with 32-bit CPUs cannot update to iOS 11 at all.

Apple has also started the transition for macOS to drop 32-bit support. It will require new apps and updates submitted to the Mac App Store to support 64-bit apps in 2018 …

Apple is moving both macOS and iOS forward although its path for abandoning 32-bit on macOS is only just beginning (more below).

For iOS, 32-bit apps are now completely unsupported. On an iPhone or iPad running iOS 11, trying to open a 32-bit app fails and instead shows an error alert.

It reads ‘The developer of this app needs to update it to work with iOS 11’.

There is an OK button to dismiss the alert or a Learn More button which presumably will give the user a bit more of an explanation about why their app no longer works, although pressing it currently does nothing on the first beta seed. 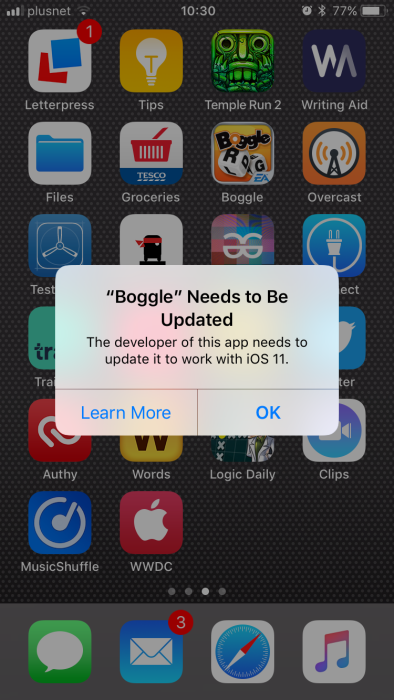 For iOS 11 users worried that their favorite apps are about to be cut off, you can check which apps do not support 64-bit architectures via Settings on iOS 10 or iOS 11.

Go to General -> About -> Applications. If you have 32-bit apps installed, you will be able to tap on Applications and see a list of your obsolete software. Whilst on iOS 10 these apps still launch, on iOS 11 you can only hope that the developer continues to maintain the application and releases an update.

The transition should not be too painful as the majority of 32-bit apps still on the App Store are already old, partially broken and unused. In my case, my iPhone had just one app that is no longer supported on iOS 11, Boggle from EA.

For the Mac, Apple told developers that macOS High Sierra would be the last version of its desktop operating system to support 32-bit apps ‘without compromises’.

Starting in January 2018, all new apps submitted to the Mac App Store must support 64-bit. From June 2018, the same requirement applies to new apps and updates. This marks the start of a transition where in a few years, 32-bit Mac apps will no longer be supported and won’t run.

Like with iOS, most modern Mac apps do support 64-bit although there are probably more laggards. You can see if you are running any 32-bit apps via Activity Monitor.