On the tenth anniversary of the iPhone, here’s how iOS has transformed over the years As we celebrate the tenth anniversary of the iPhone today, let us not forget the operating system that powers it all: iOS. Introduced alongside the first-generation iPhone in 2007, the then-called iPhone OS was the basis of Apple’s first smartphone and its goal to introduce “a revolutionary product that changes everything.”

10 years later, the iOS has evolved just as much as the iPhone hardware has, if not more. Head below as we take a look at the progression of iOS over the years…

When Steve Jobs originally unveiled the iPhone at the Macworld Conference & Expo on January 9, 2007, he proclaimed the iPhone ran “real Mac OS X” and was capable of running “desktop applications.” Fast forward a few months and the iPhone operating system had been renamed to just iPhone OS, and thus the introduction of iPhone OS 1.

iPhone OS 1 didn’t support native applications, with Jobs instead pushing developers to build web applications that “would behave like native apps on the iPhone.” Jobs eventually changed course, however, and announced the iPhone SDK. 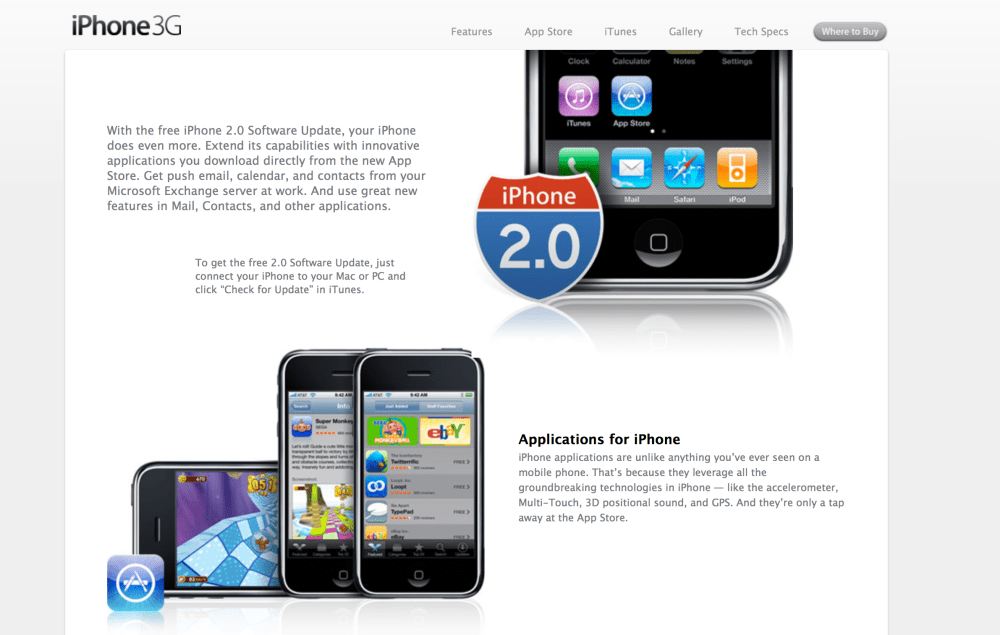 The iPhone SDK was announced in 2007, with the App Store opening in July 2008 with 500 applications available alongside iPhone OS 2. That number has since risen to over 2.2 million. iPhone OS 2 was free to iPhone users and $9.95 for iPod Touch users. iPhone OS 2 also included new features such as push notifications. Here’s how the company described iPhone OS way back in 2008:

With the free iPhone 2.0 Software Update, your iPhone does even more. Extend its capabilities with innovative applications you download directly from the new App Store. Get push email, calendar, and contacts from your Microsoft Exchange server at work. And use great new features in Mail, Contacts, and other applications.

The third major release for the iPhone (and iPod Touch) was iPhone OS 3, which came in June of 2009. This brought the highly sought copy and paste functionality, as well as MMS support, Spotlight search, Voice Memos, MobileMe support, and more.

When the iPad was introduced in April of 2010, Apple rebranded iPhone OS as iOS and introduced iOS 3.2.

Then came iOS 4, the first major release to feature the new iOS branding and that was free to all devices and all users. iOS 4 brought new features such as “multitasking” support, spell check, a unified inbox in Mail, and digital zoom in the camera app. Just a month after the release of iOS 4, however, Apple issued iOS 4.0.1 to address the “Antennagate” phenomenon that was plaguing the iPhone 4 with changes to carrier signal strength.

Apple touted that iOS 4 included “over 100 new features” that let you do “some amazing things,” including create folders and change your Home screen background (thus the inclusion of the now famous water drop background). 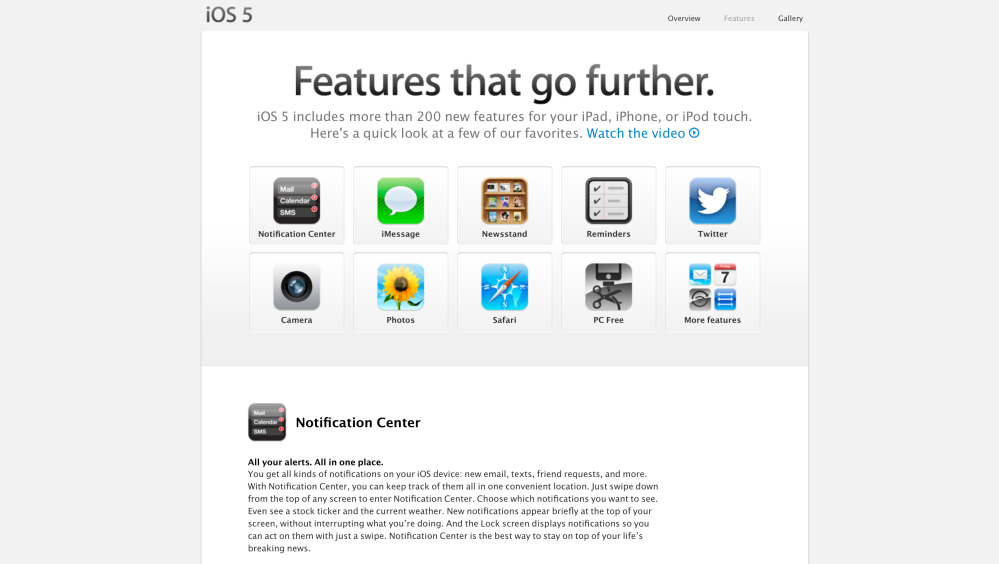 iOS 5 was officially unveiled on June 6th, 2011 at WWDC and was eventually released to the public on October 12, 2011. New features here included iCloud, Notification Center, over-the-air software updates, and much more.

At the time, Apple said that iOS 5 included over 200 new features for iPhone, iPad, and iPod Touch. Newsstand was introduced for managing reading material and newspaper subscriptions, iMessage allowed for communication that “more than text,” AirPlay allowed for Apple TV streaming, and much more. Siri was also a tentpole feature of iOS 5. 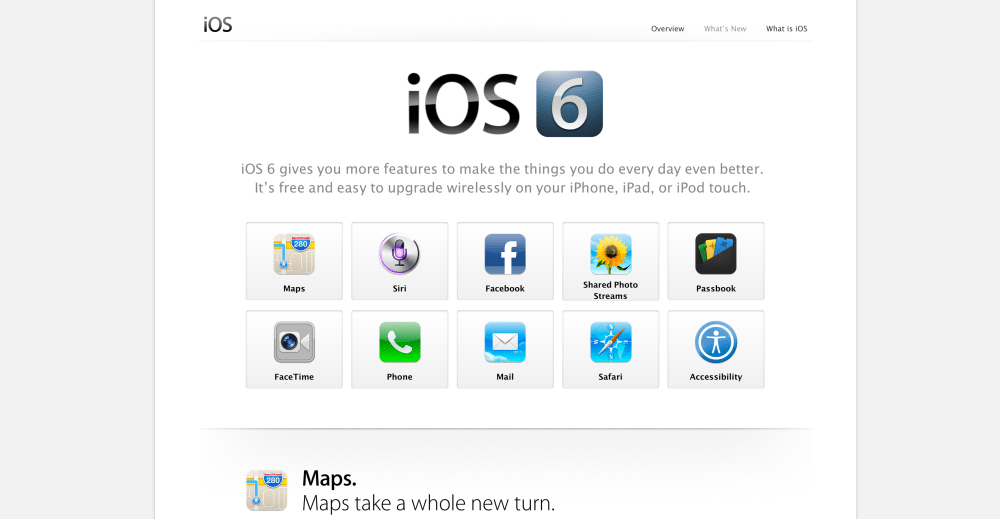 iOS 6 was the next major update to iOS and was introduced to the public at WWDC in June of 2012 and released in September. Most notably, the update made the switch from Google Maps to Apple Maps, a transition that went anything but smoothly at the time.

Upon release, iOS 6 was received as a much welcomed update that focused on refinements and improvements, rather than flashy new features and design changes. The same couldn’t be said for iOS 7…

iOS 7, released in the fall of 2013, was a major overhaul to Apple’s mobile operating system, with Jony Ive declaring that the update featured “profound and enduring beauty in simplicity.” Apple bragged that iOS 7 was “the mobile OS from a whole new perspective.”

iOS 7 brought features such as Control Center for quickly changing settings, a new card-based multitasking interface, improvements to Camera and Photos, AirDrop, and much more. Here’s how Apple described iOS 7 at the time of release:

iOS 7 introduces great new features like Control Center, AirDrop for iOS, and smarter multitasking. It also makes the things you do every day even easier, faster, and more enjoyable. And while many of the apps look different, the way you do things feels perfectly familiar. So from day one, you know how to use the world’s most advanced mobile OS. In its most advanced form. 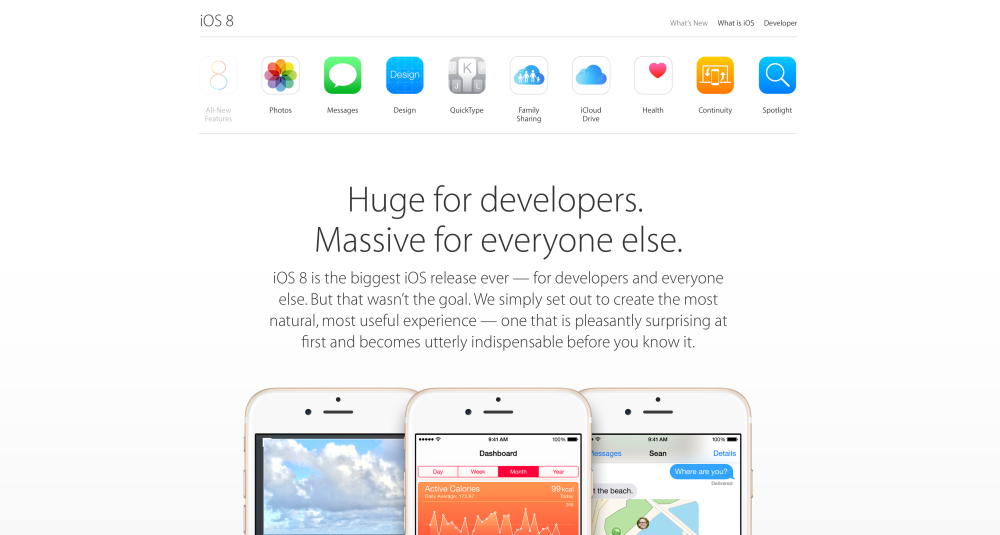 iOS 8 was released a year later with Apple teasing that the update was “huge for developers and massive for everyone else.” The update included changes such as an all-new Photos app, Family Sharing, Continuity, photo and video capturing support in Messages, iCloud Drive, and much more.

Quickly find and edit the photos you take. Add your voice right in a text message. Let your health and fitness apps communicate with each other, with your trainer, and even with your doctor. We’ve also provided developers with deeper access and more tools.

You’ll have new keyboard options and even more ways to share your content. And you’ll be able to use iCloud and Touch ID in ways you never have before. Here are some of the things iOS 8 can do for you so you can do more than ever.

In between iOS 8 and iOS 9 was the somewhat significant iOS 8.4 update. This brought the introduction of Apple Music, the company’s streaming music service meant to compete with the likes of Spotify. It also brought the always-on Beats 1 station and a completely new Music app.

iOS 9 was made available in the fall of 2016 and introduced a host of new features and changes, including an all-new Apple News application, new multitasking capabilities on the iPad, Siri proactive support, and much more. Given that iOS 9 was released alongside the iPhone 6S, it also brought support for features such s Peek and Pop and Quick Actions in conjunction with 3D Touch.

At the time of release, Apple bragged that iOS 9 was “the most advanced mobile experience. Now even more so.”

iOS 9 brings you refinements at every level — from the apps you see on your Home screen down to the foundation of the system. Siri is smarter than ever, proactive suggestions keep you on track, and multitasking on iPad hits an all-new high with Slide Over, Split View, and Picture in Picture. All these enhancements enable your devices — and you — to do so much more every day. 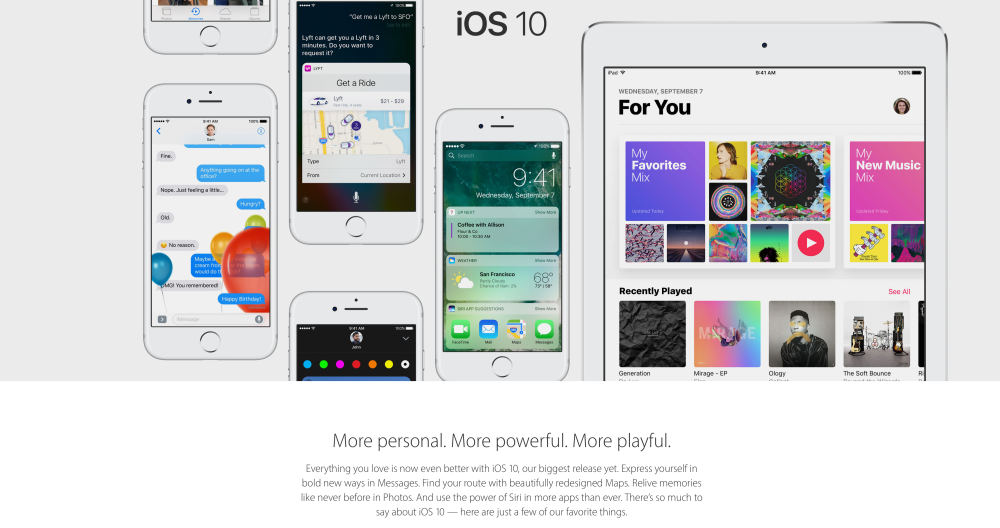 Then came iOS 10, which Apple touted as its “biggest release yet.” The update included a redesigned Maps app, Memories in the Photos app, third-party app support for Siri, and much more:

Everything you love is now even better with iOS 10, our biggest release yet. Express yourself in bold new ways in Messages. Find your route with beautifully redesigned Maps. Relive memories like never before in Photos. And use the power of Siri in more apps than ever. There’s so much to say about iOS 10 — here are just a few of our favorite things.

As you can tell, iOS has come a long way in the last 10 years. It’s gone from a single screen of icons with no third-party apps to an entire ecosystem of over 2 million apps. There are features that I take for granted now that I probably undervalued when they were first unveiled. iOS 11 is about to bring even more to the table, and who knows what’s beyond that.

Do you appreciate the changes that have come to iOS over the last 10 years? Are there things you wish you could revert? Let us know your musings down in the comments.