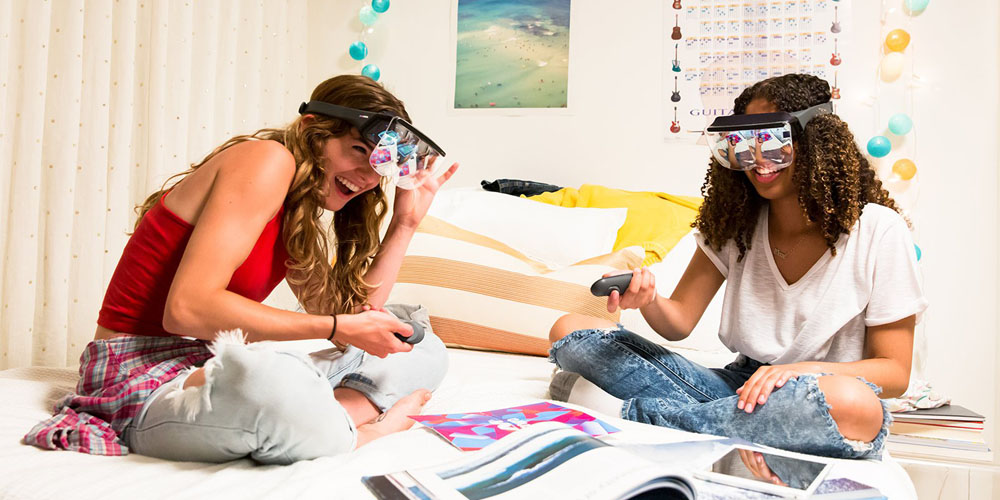 We’ve been seeing some impressive augmented reality apps of late, but if holding your phone out in front of you feels a bit too artificial, an LA-based startup has an affordable alternative.

The Mira Prism is a $99 headset with a slot for an iPhone 7. Instead of the Google Cardboard approach of having the screen face you, it instead faces the inside of the visor. You then see the augmented elements reflected on the plastic in front of you, and the real world through the glasses …

The simplicity of the device is what enables the company to keep the price down.

No plugs, computers, or wires needed. No matter where you are, simply open the Mira app on your smartphone, slide it into the Prism headset, and begin exploring the wonders of interactive holographic content.

There’s also a spectator mode which enables a friend to see your AR experience on their own phone or tablet.

Of course, reflected images require apps designed for that view, so Mira is making the headset and accompanying SDK available first to developers. They’ll be able to get their hands on one in the fall, with the SDK available next month, while everyone else will have to wait until the holidays.

The drawback of that timing is that the Prism is currently iPhone 7 only, and by the holidays many would-be customers will have an iPhone 8 …

But if you’re not planning to upgrade, Engadget was reasonably impressed with a brief hands-on.

Even though I only had a few minutes with the Prism, I was impressed with what I saw. I’m used to trying on headsets that are too expensive for most people to buy, so it was a bit of a shock that it worked at all. Beyond the initial setup experience, I played a holographic game that involved maneuvering a character through a maze, which relied on the controller’s motion controls. Another game had me spinning around in my chair to destroy asteroids hovering all around me. I was particularly surprised how well Prism tracked virtual objects in AR, even though it doesn’t have any spatial mapping technology like HoloLens and Meta.

You can pre-order at the company’s website. The usual cautionary note applies about buying products that don’t yet exist. There’s also a rumor of a (doubtless very much more expensive) Apple active AR headset in the works.