Facebook today has announced a host of updates for both mobile and desktop users. Most notably, the company is making changes to how users go about navigating the News Feed on desktop and mobile, while the Camera functionality is also gaining a handful of new features.

First off, Facebook is gradually rolling out several changes to its iconic News Feed. For instance, the comment section is being dramatically overhauled to look more like chat bubbles. This change will also bring a new interface for replies that makes it a bit more apparent which posts are replies and which are original comments.

Furthermore, Facebook is working to make text a bit easier to read. The color contrast is being increased across the interface, while link previous are getting bigger, profile pictures are becoming circular, and more:

Finally, News Feed navigation is also being updated with more information about where links ultimately lead to and more: 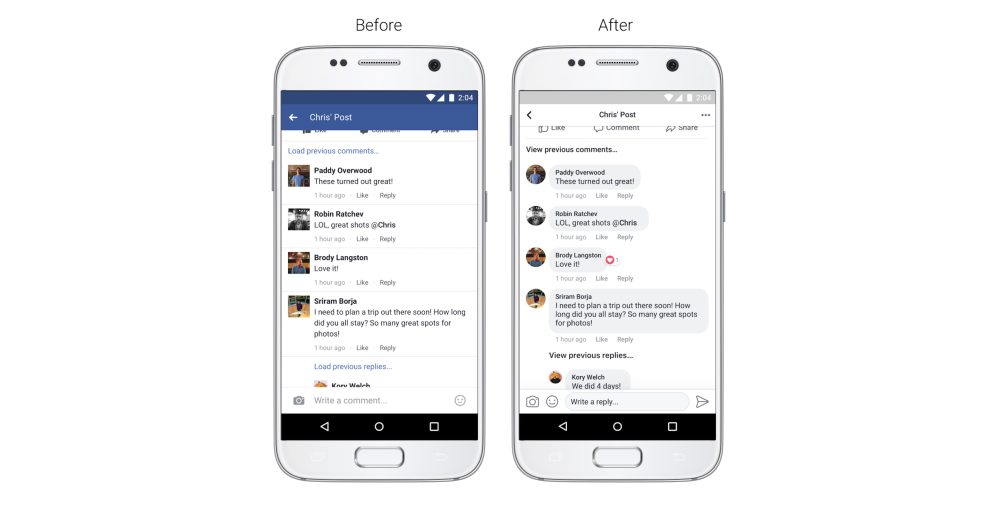 In addition to the News Feed changes, the Facebook Camera interface is also undergoing a few enhancements of its own. For one, Facebook is officially rolling out the GIF creation feature that it started testing earlier this summer. This feature will allow users to record two-second GIFs and quickly share them via Facebook’s Story functionality, the News Feed, or via Messenger. It’s essentially Instagram’s Boomerang feature, but in Facebook.

Additionally, users can now start a live stream directly from the camera interface. Facebook hopes this will encourage more users to take advantage of their live platform. Finally, Camera gains support for creating text posts and sharing them in image form via Stories or the News Feed.

These updates are rolling out gradually to the Facebook mobile apps and desktop.