Comparison: The best apps for identifying fonts with your iPhone 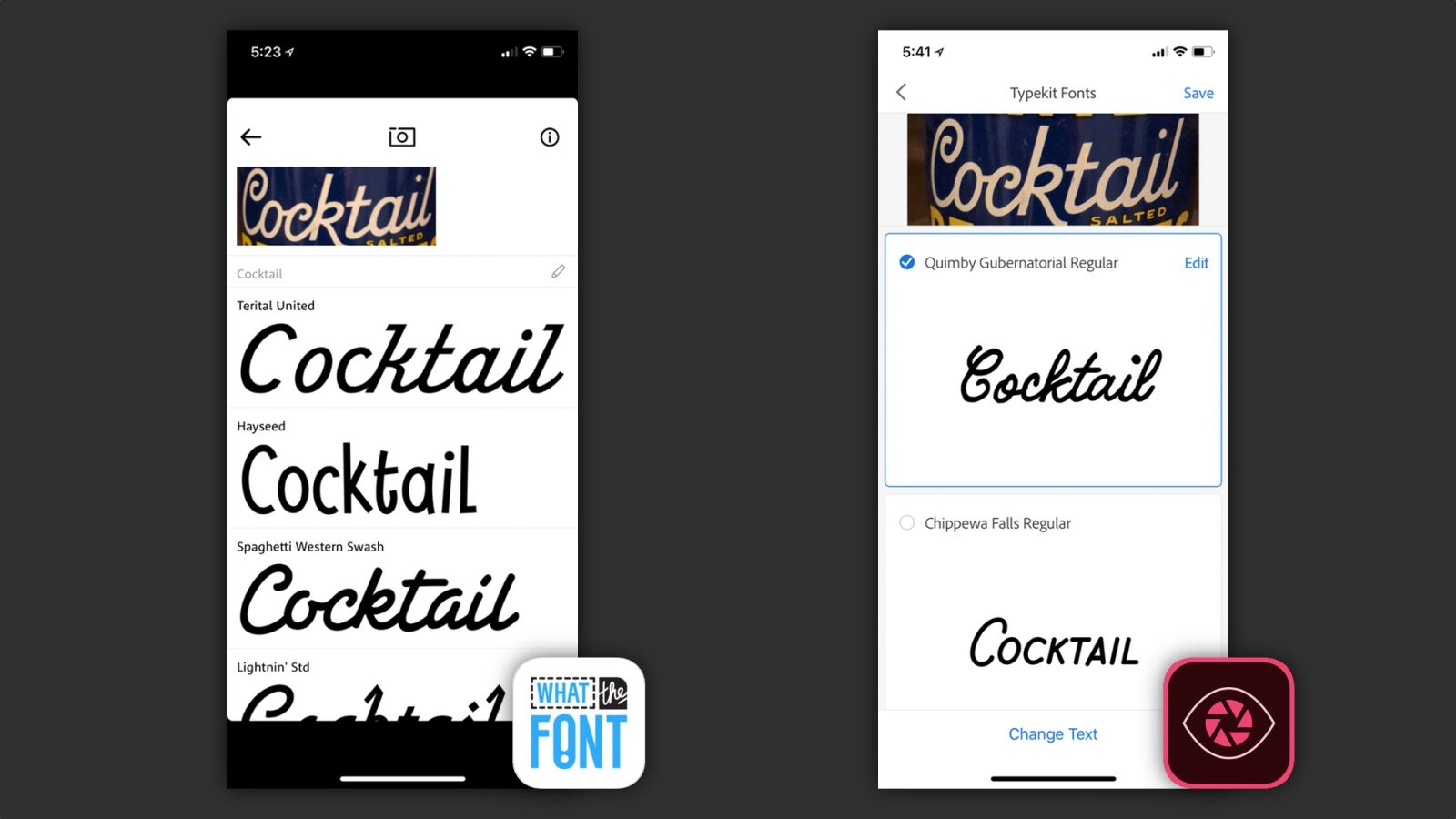 If you’re a designer, you’ll know that font selection can make or break the effectiveness of your work. Often times when I’m away from home I’ll see signs and ads with perfect type on them, and snap a photo for later. What you may not know is that your iPhone can automatically identify fonts for you from photos, thanks to new apps that are harnessing the power of machine learning to analyze photos. I took a look at the best options available to see which may be right for you.

Until recently, font identification was mostly limited to the desktop, with websites like WhatTheFont and features like Match Font in Photoshop allowing you to use an image for analysis. While these tools typically work well, they require you to be at your desk – not exactly the place you’re likely to run into inspiring new fonts. Physical products like Spector attempted to take font identification mobile, but the most natural tool to use on the road is your iPhone.

Over 8 years ago, MyFonts released WhatTheFont for iOS, a simple app that identified fonts based on photos you took on your iPhone. The app was quickly abandoned until this past October, when version 2.0 launched. Rebuilt from the ground up, WhatTheFont is now powered by new deep learning technology to make identifying fonts faster and more accurate.

At Adobe MAX 2017, the Adobe Capture CC app also received a substantial update, bringing Typekit visual search to the iPhone. The concept is much the same: snap a photo and Adobe Sensei will identify the fonts in it. The two services have some key differences though, which I’ve compared below. 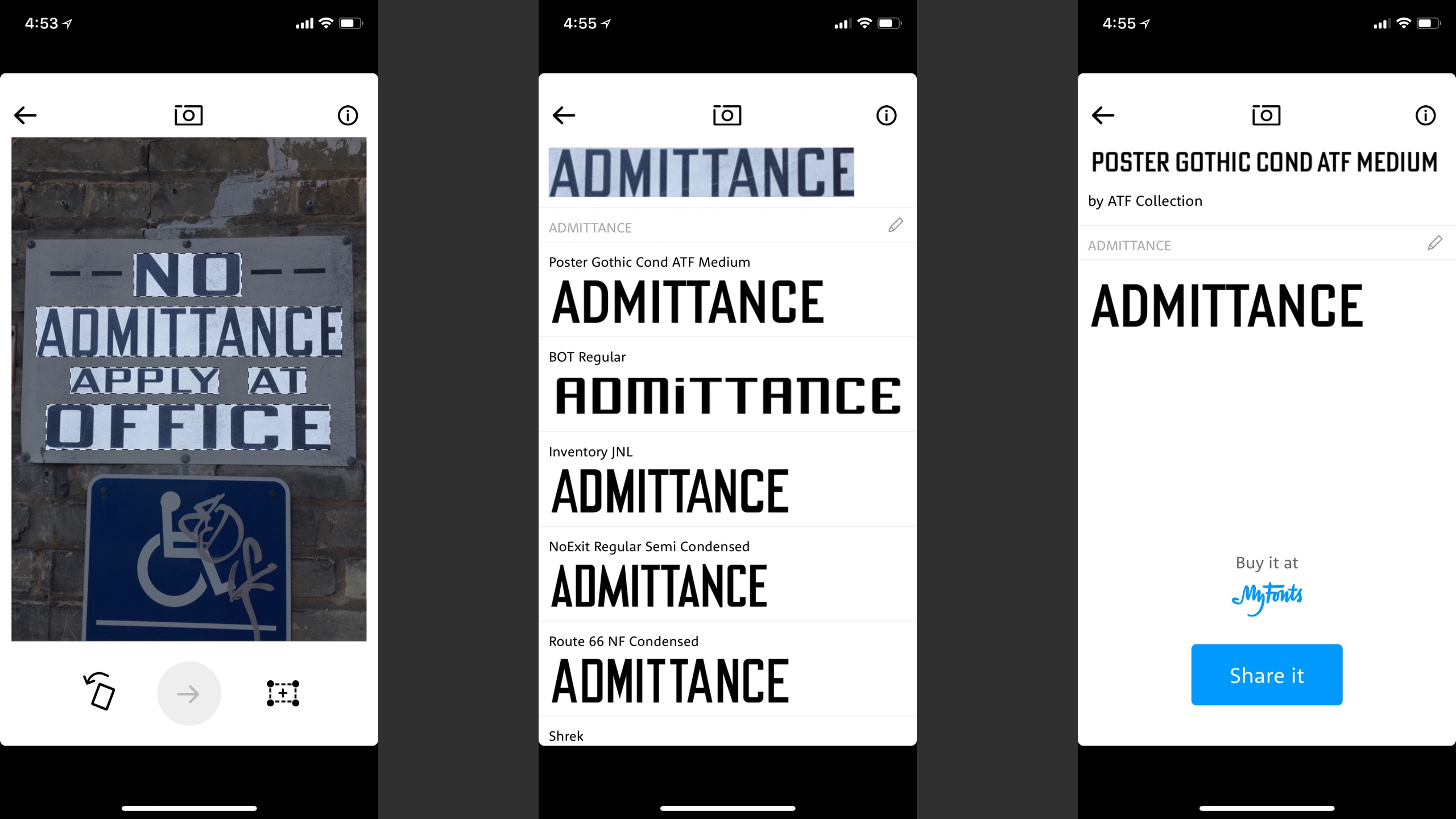 When you launch WhatTheFont, you’re taken directly to the camera, where you can snap a photo. iPhone X users will notice that the app hasn’t yet been updated to support its larger display size at the time of this writing, but this will likely happen in the near future.

WhatTheFont will analyze your photo and identify every line of text in it. I was impressed by the speed and accuracy of the analyzing process, although the results weren’t always perfect. You can tap on any text box to select it and identify the font used in that word or line. By dragging the handles on any text box, you can adjust the region WhatTheFont will scan. You can even rotate and crop your image to align the text more precisely. 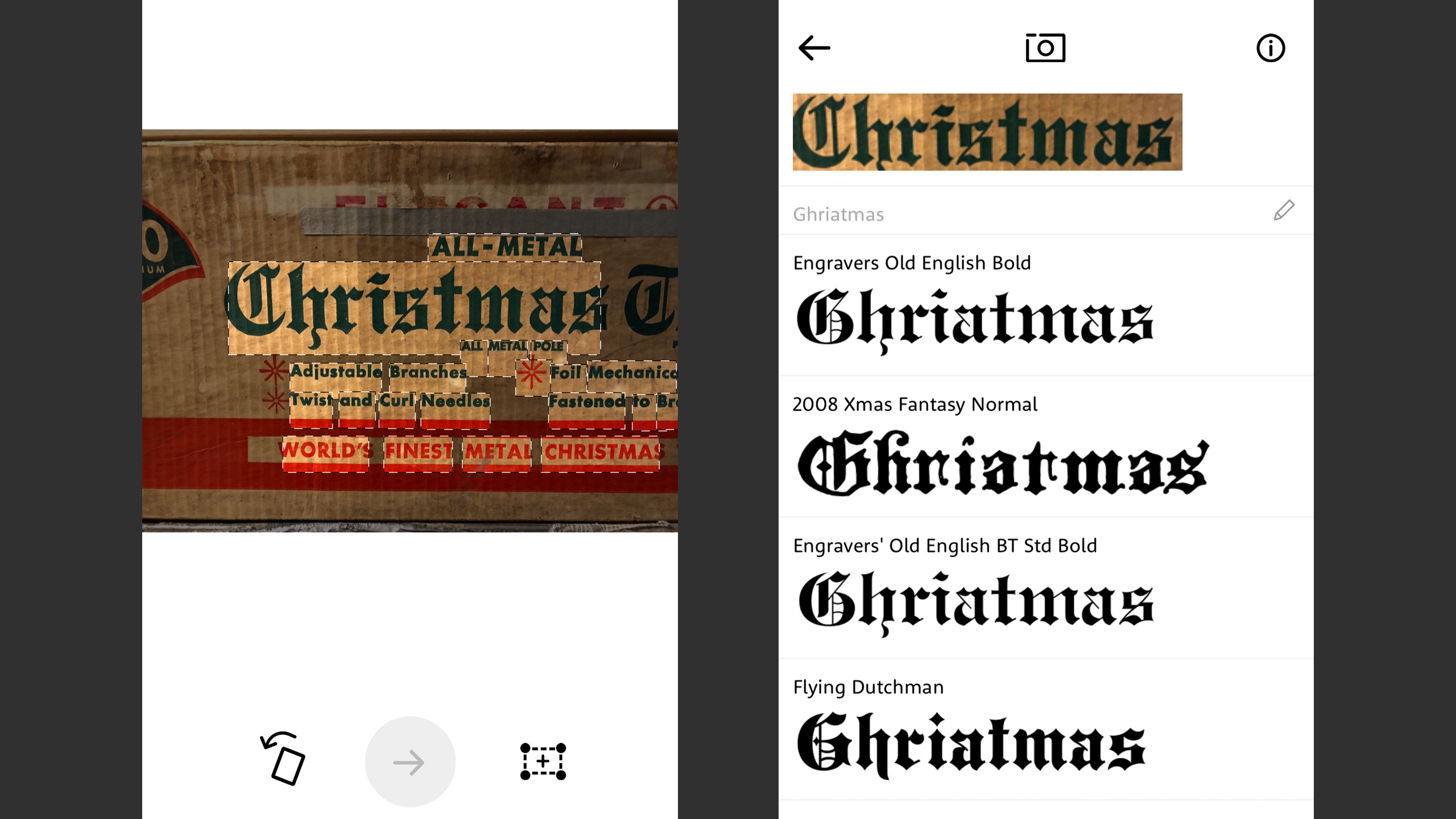 Fonts determined to be similar to the text you scanned are displayed in a list, along with a preview of what the font looks like. The app offers links to the MyFonts website, where you can purchase any font you find. MyFonts is owned by Monotype, and boasts an impressive library of fonts. WhatTheFont can allegedly identify over 130,000 fonts, including connected scripts. More often than not, I was able to find a font that was a close match to my analyzed image. 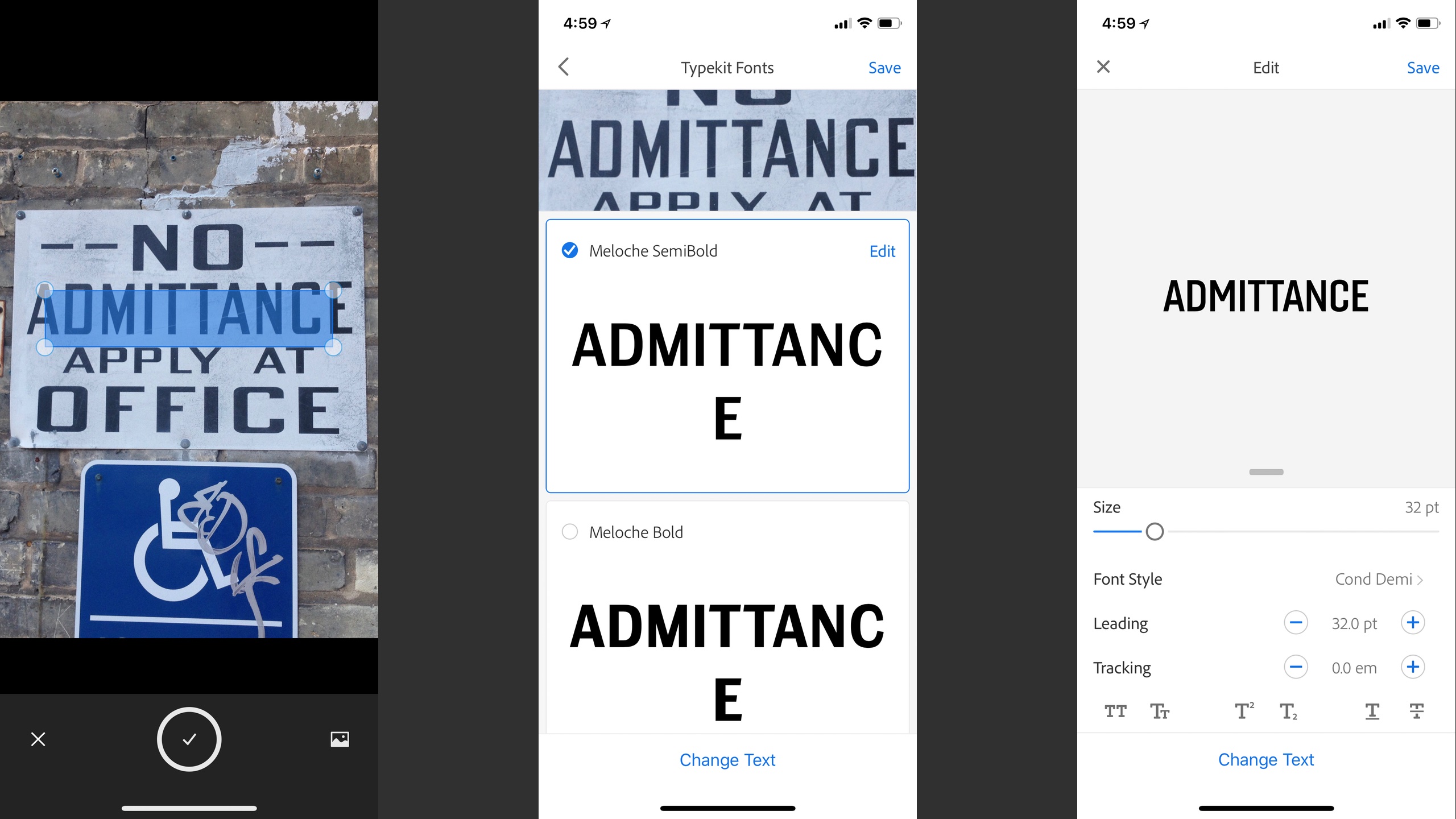 While WhatTheFont is a single-purpose tool, Adobe Capture is more of a workbench of many tools for capturing and saving design inspiration. Typekit visual search is the newest tool.

The Type tab in Adobe Capture shows your saved fonts, with a button to start a new scan. The camera interface in Capture is similar to WhatTheFont’s, but noticeably more rudimentary. Capture instructs you to place a single line of text along a guide onscreen, where it places a text box that you must manually align. Multiple lines of type and font styles are not supported at this time. 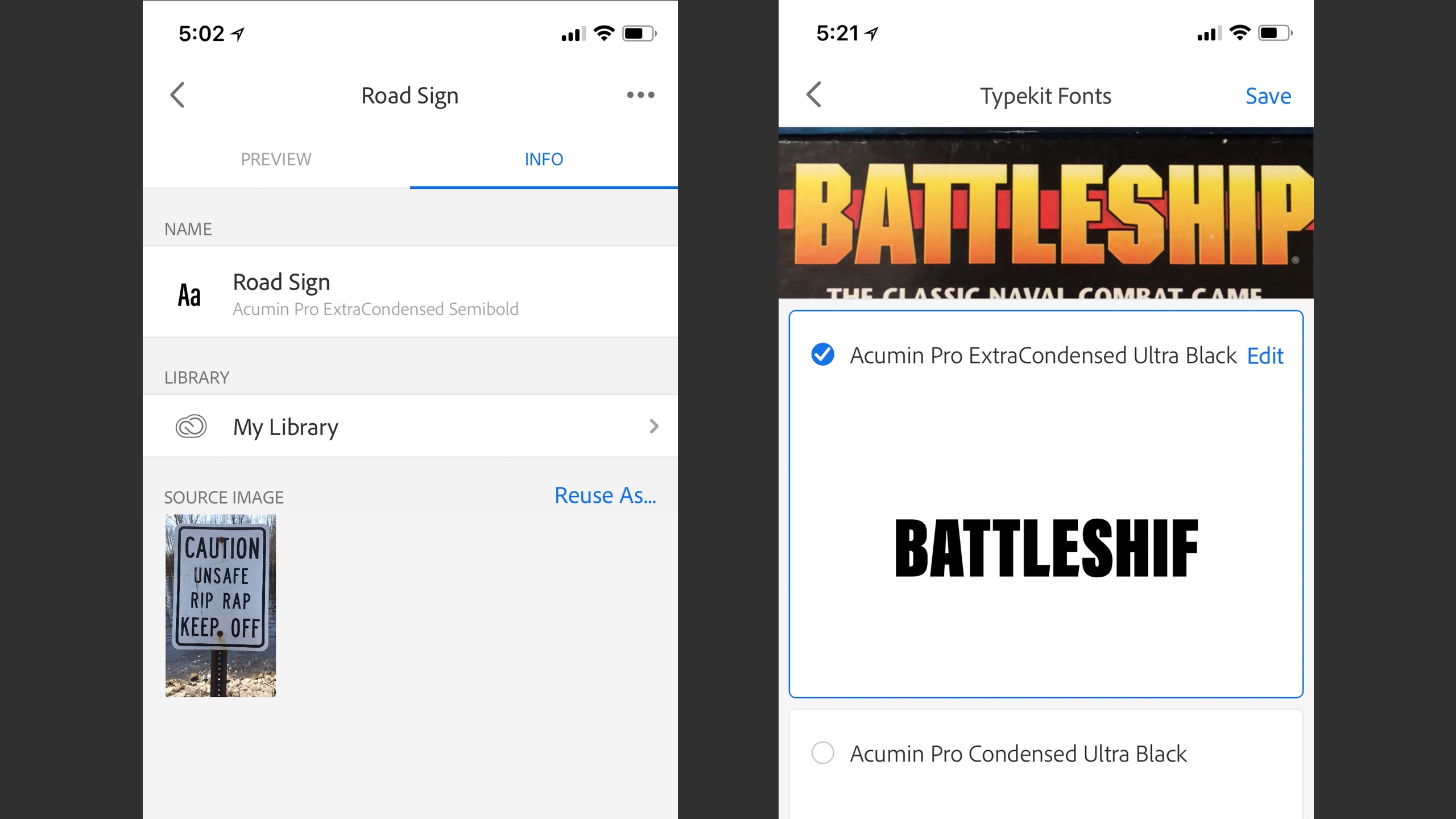 After analysis, you’re again presented with a list of matching fonts. Unlike WhatTheFont, you can edit specific parameters of a font here, like size, style, leading, and tracking. Your specific font style can be saved to Adobe Capture, where it is synced to your Creative Cloud account. This is the most powerful part of Capture – the ability to take a font right from a photo and instantly start using it in other Adobe apps, like Photoshop.

When it comes to picking a tool for yourself, there are two questions you need to ask yourself:

Do I use Creative Cloud? If you already subscribe to Adobe’s services, Capture is the obvious choice. The tight integration with other Adobe apps makes the process a breeze.

How important is accuracy? If you need character-for-character font matching, WhatTheFont is the tool of choice in most scenarios. The precision of my match results was unparalleled.

It’s important to remember that fonts purchased from MyFonts can be easily used in almost any design tool, including Adobe apps. Both apps are available for free in the App Store, so it’s not a bad idea to use the pair side-by-side and compare the results from each.