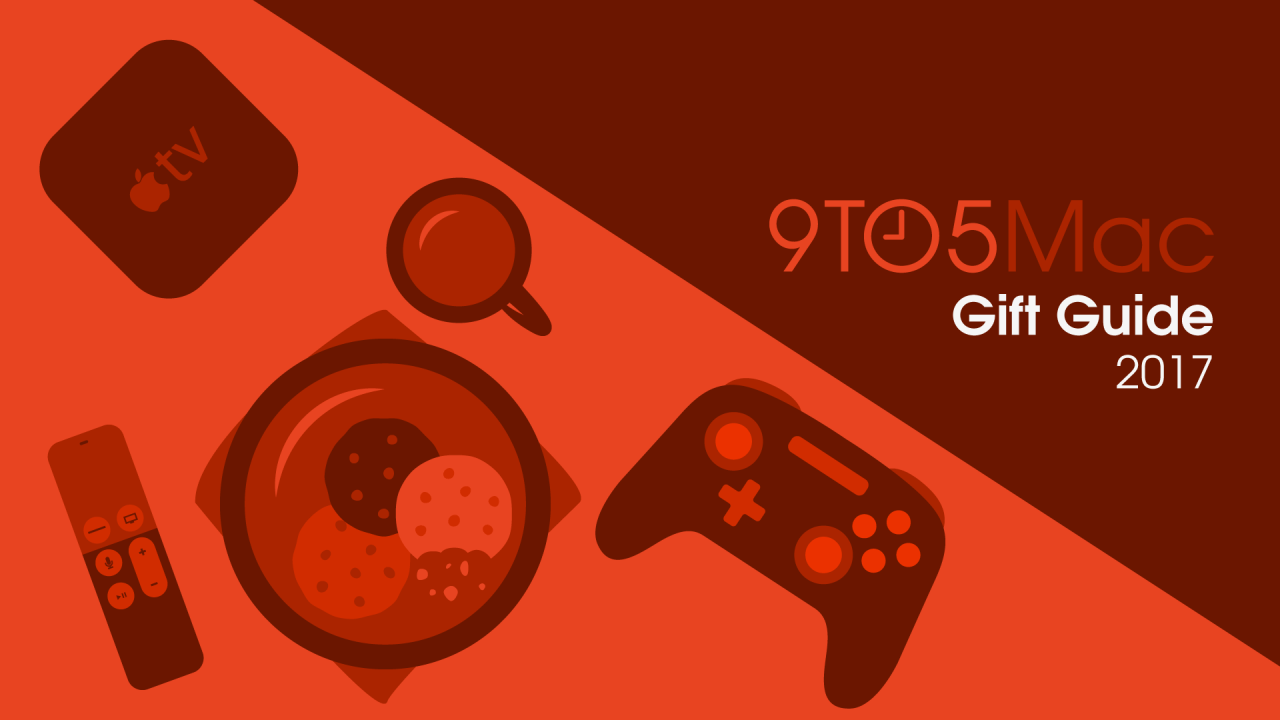 The Apple device ecosystem has heralded new ways for creative game makers to realise their vision, often by combining physical elements with apps, to form engaging and addictive experiences. Most of this guide leans on casual gaming where a whole family can join in together, but there’s also a consideration for the serious side of games too.

We feature the endearing Beasts of Balance, the Osmo game system, MFI game controllers and more. Read on after the jump for the full list.

Beasts of Balance is an incredible modern tabletop game that uses a complementary app as a central part of the game. It takes the universal concept of ‘build as tall a tower as possible’ and fleshes it out into a rich, endearing, modern board game. The Beasts of Balance plinth communicates with an app running on iPhone, iPad or Apple TV.

Players set cute animal figurines onto the plinth to start building a tower. The plinth includes an NFC reader which scans the object as they are placed, which causes special events to happen on the app display. Interlocking cross parts cause mutations in the virtual creature which is artistically brought to life on the iOS device screen.

You also have other challenges to keep on top of as the tower is built, like remembering to change the moon to a sun. If the tower falls, the app shows a bubbling volcano and the tower has to be quickly rebuilt before it erupts. There are wonderful tradeoffs built into the gameplay; awkwardly-shaped objects have higher point scores but a much higher risk of toppling the tower altogether.

The build quality of the stackable animals and artefacts is stellar; everything in the physical box and digital app is beautifully illustrated and designed. You can set it up in the living room with Siri Remote and Apple TV, or play in a bedroom with a single iPhone or iPad. It really is fun for the whole family. Buy the kit for $99, the app is a free download.

Gamevice for iPhone and iPad ($99) 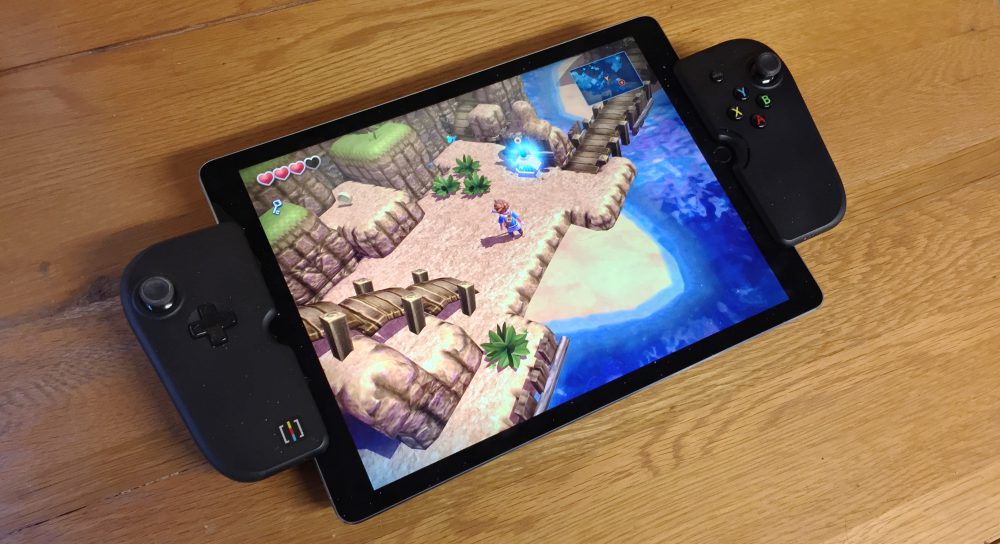 There are a lot of interesting games to play on the App Store, but you often feel limited by the touch interface for controlling your character or moving around the world. The Gamevice attaches to the iOS device — I use it with my 12.9 inch iPad – to add gamepad buttons and analog joysticks on both sides of the screen. Read my full review here.

The Gamevice essentially turns your iPhone and iPad into a handheld console. Comfortably grip the device with the attached left and right pads, take advantage of fine-grained control and character movement with the buttons, triggers and analog sticks whilst leaving the entire display unobscured.

If you loved using a Gameboy Advance as a kid, this is basically an iOS version of that. MFI game controllers have been possible for a while and now there is a big library of games that support them. Because the Gamevice is essentially a handheld dock, it will only work with a single form factor of iPhone or iPad. If you buy a newer iPad in the future, there’s a good chance the Gamevice will no longer fit.

Check out the full Gamevice range here for almost every iOS device on the market; pricing varies around $100 mark. 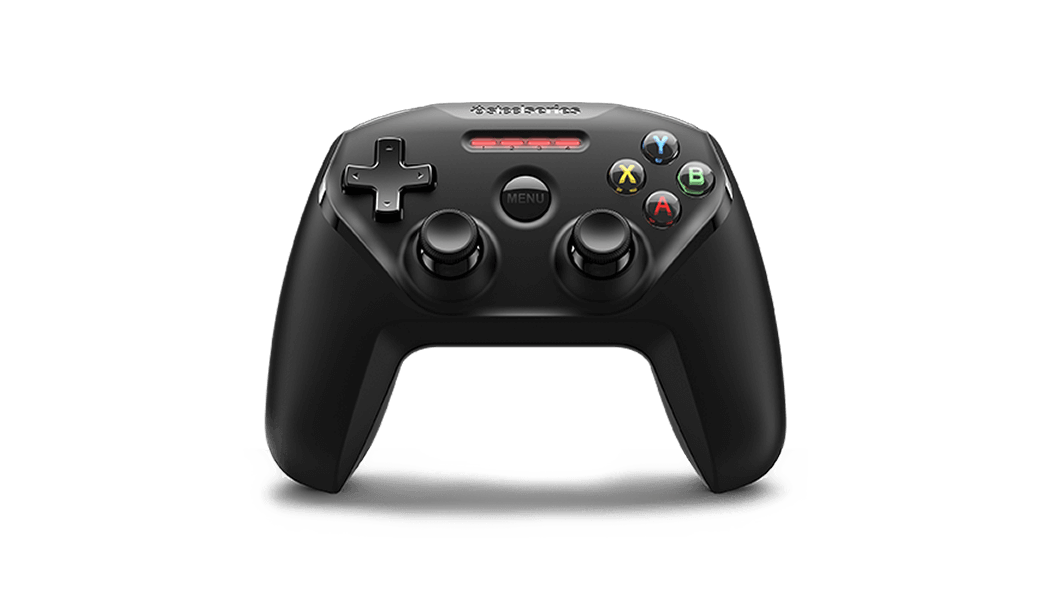 This is the second MFI controller recommendation. Whereas the Gamevice (above) snaps onto an iPhone or iPad to make a handheld, the SteelSeries is a traditional external controller design. It’s just like a console gamepad and communicates wirelessly with iPhone, iPad and Apple TV.

If you play any games on Apple TV, even simple one-button titles like Mr Jump or Crossy Road, using a real game controller is so much nicer than the Siri Remote. It also lets you dive into richer titles like Rayman Adventures and Oceanhorn; touch controls simply cannot beat physical buttons for games like these. The convenient thing about the Nimbus controller is that it doesn’t require a particular form factor; it just connects via Bluetooth to any iOS or tvOS device. Unlike the Gamevice though, you do have to remember to charge the Nimbus battery separately.

The Apple Store has a special bundle by the way for this item; you can get Minecraft for Apple TV and this controller at a reduced combo price. There’s also a Stratus controller which is half the price, and about half as nice to hold.

The Osmo game system is a fun accessory that you can gift to kids and play together as a family. You set an iPad up on the special stand and attach a special red mirror that angles the camera downwards. The Osmo comes with physical objects that the app detects through the camera to create an interesting combination of physical and digital world. Move a plastic block on the table and the iPad app tracks the motion and uses it in the on-screen game.

Most of the games are targeted at younger children, with a few activities for older ages and adults. You can get kits for drawing, learning vocabulary, music sequencing and basic building blocks of programming, and more. The Osmo packs are pricey but you can buy a Starter Kit to begin with and gradually add in additional sets to expand the experience. Read my hands-on review of the Osmo Monster kit from last year.

I like the Osmo because it integrates the iPad — which most kids regard as a mere portable TV screen frankly — with a kinaesthetic activity. You can even argue there is some educational value amongst the entertainment. They have also recently released a base for some models of iPhone, if you don’t want to use an iPad.

The new Apple TV features a much more powerful A10 Fusion chip to drive the 4K video playback, but it also theoretically enables fully-fledged gaming with console-like visuals. A lot of that promise is still dream rather than reality. There are fun games to play on Apple TV but I haven’t seen anything yet that takes advantage of the additional power. If I was buying a new Apple TV for the first time, though, I’d still opt for the new 4K version. The price premium compared to the 2015 model is only $20 (and you probably don’t need the 64 GB model). That slight price bump is worth the future-proofing.

Nevertheless, I still think the Apple TV is a fun casual games machine. Most titles are simply ports of games from iPhone and iPad, but that doesn’t mean they aren’t fun. The Siri Remote works decently for simple one-button and motion controlled driving games, of which the App Store has plenty. tvOS plays host to a lot of family games too; shout out to SketchParty TV for something to play as a family this holiday season.

There are a handful of sophisticated titles too; I loved playing through Oceanhorn and I’m really looking forward to the visually-enhanced sequel due in 2018. Does it compare to an Xbox? Of course not — but fortunately the Apple TV does a lot more than just play games. 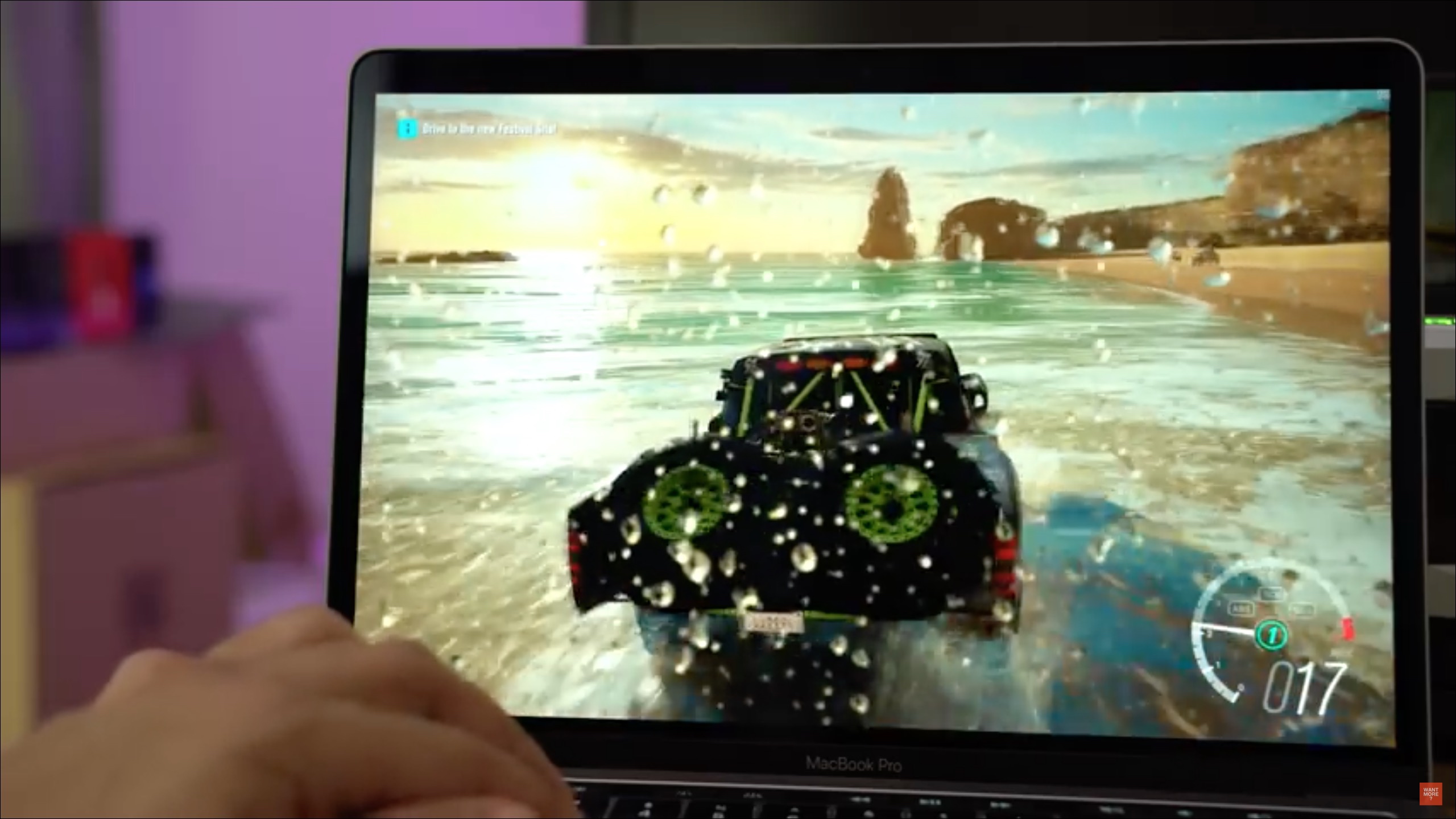 Slightly off-topic but I want to include a quick word on the state of Mac gaming. In short, it’s okay as long as the games you want to play are available on macOS and aren’t looking to max out every visual effect in the settings screen. There are a lot of caveats compared to a Windows machine but you can get pretty far with just a MacBook Pro. My addiction League of Legends (and Starcraft before that) all began on a Mac, and the arrival of Steam on the Mac platform has expanded the ecosystem of available titles considerably.

You will want to snag a mouse and external keyboard, though. My personal opinion is that almost all of the PC accessories advertised for ‘gaming’ are overpriced and not worth the money. I buy relatively-cheap USB mice and use them until they wear out. I think you can justify spending more on fancy mechanical keyboards if you want to, but my personal preference is to use Apple’s own wireless keyboards for consistency with what I type on for my day-job. 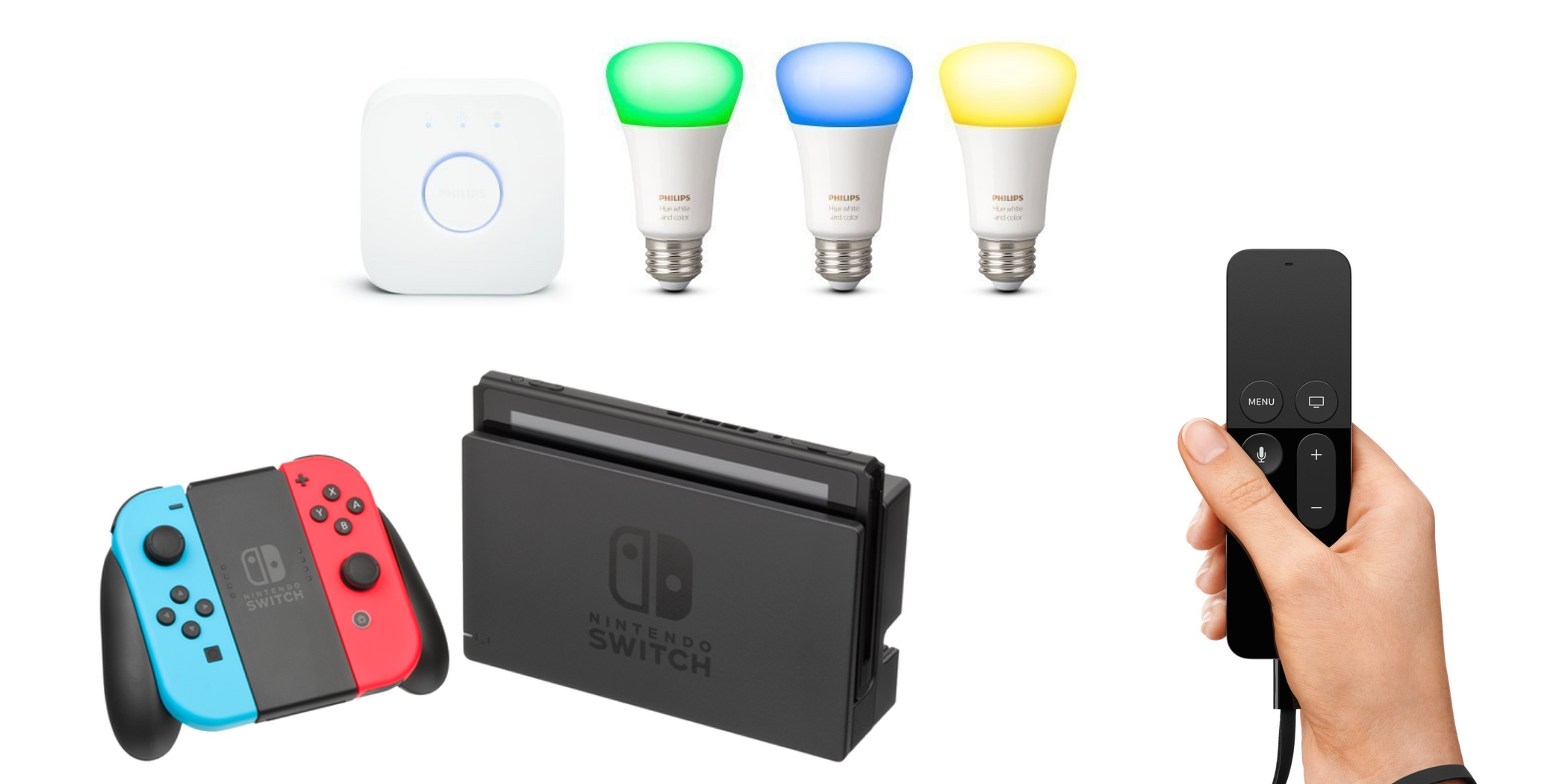 It’s hard to disagree that Nintendo had a huge impact on the gaming world this year, launching their new console generation that can dock into a TV and be picked up to use on the go, the Nintendo Switch. Despite being technically less powerful than an iPad Pro, the Nintendo Switch ecosystem features AAA titles that the iOS or tvOS App Store simply can’t compete with, including game of the year candidates Mario: Odyssey and Zelda: Breath of the Wild.

Everyone remembers the horror stories of breakages that happened with the Nintendo Wii years ago. Unfortunately, the Apple TV shares much of the same issues with its Siri Remote. A lot of the dumb fun Apple TV games rely on accelerometer motion controls. At the same time, the Siri Remote is made of metal and glass — it is prone to both breaking and breaking other things.

Apple actually has a solution for this: the $9 Remote Loop. It slots into the Lightning port and adds a little wrist-strap for when you are using the remote. It’s kind of silly to include it in a gift guide roundup but if you are buying an Apple TV for the first time and have an inkling to try out the game offerings in the tvOS App Store, pick up a remote loop while you are at it.

A regular feature on my yearly holiday gift guides is some kind of smart lighting solution. Philips Hue are independent bulbs that you just screw in — you don’t have to change wiring or wall sockets — and you quickly get up and running with HomeKit supported (optionally multi-colored) smart lighting. Set them up in your living room and use Apple TV’s Siri to change the ambiance when you watch a movie or settle down for some late-night gaming.