Stolen ‘Cuphead’ game gets past App Review accompanied by faked developer website, appears to be one of many 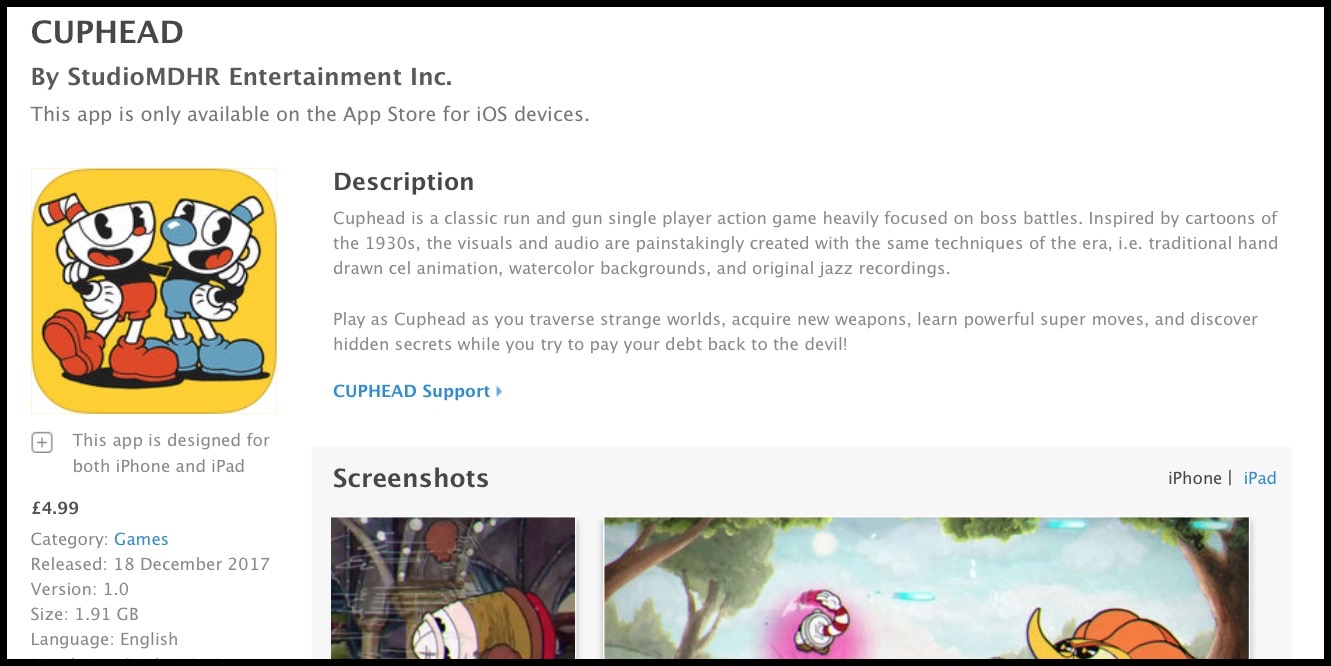 Cuphead was a smash-hit game this year, with Studio MDHR releasing on Windows and Xbox. This morning, Cuphead appeared on the App Store with recognizable app icon, screenshots and branding. Except it is all fake. Whilst the game is actually somewhat playable, it is a stolen port of the desktop game and should not be downloaded. Update: The game is no longer available in the App Store.

The criminal who published it to the App Store also made a fake website as the support link, to confuse App Review in believing the game was legitimate. The game has yet to be pulled from the App Store, and sadly appears to be one of many cases from the same unscrupulous person.

Apple will likely refund anyone that purchased the game in the hours it was available, so customers shouldn’t be left out-of-pocket. It is embarrassing for such a high-profile game to be forged and get past App Review, although in this case it’s hard to blame Apple too much.

It was a very sophisticated and deceptive scam. For starters, the submitted app is actually playable, featuring new on-screen virtual touch controls. It’s not like App Review was hoodwinked by a non-functioning app with stolen artwork, screenshots and metadata.

Secondly, the app developer contact website is a carefully cloned version of the real developer’s website, with the addition of references to an iOS release. Here is the real Cuphead site. Here is the fake imposter website: http://studiomdhrgames.com (now pulled). Note the URL domain is designed to confuse people by mimicking the name of the actual game developer too.

Sadly, it appears that the people behind these are systematic App Store criminals. We have found several more faked websites cloning real games that follow the same pattern, advertising a non-existent iOS version of a popular desktop game with confusing trademark-infringing domain names.

We found a cloned website of the game Spintires, as well as a site for Gang Beasts. Here are the corresponding faked sites; please do not be fooled by them. Each of these websites are registered to the same email address as the fake Cuphead website.

It’s not clear whether these games successfully made it past App Store review, or if there are even more cloned apps from the same prolific developer.

We’ve informed Apple of our findings.