Mosts analysts believe the launch of the iPhone X has pushed Apple into a super-cycle, where more customers than usual decide to upgrade. That should drive AAPL stock up for some time, but Japan’s Nomura thinks otherwise …

Business Insider saw the investment note which argues that any super-cycle effect has already been seen, and that historical patterns suggest that the stock is due to fall.

We argue that the stock’s gains for the iPhone X supercycle are in the late innings. We believe unit growth, if not quite ASP growth, is well anticipated by consensus and a historically full multiple […]

The shares fell 41% after the iPhone 5 launch and 27% after the iPhone 6. The shares obviously recovered, though only after approximately 20 months in each case. We argue this cycle is not different; we do not expect the services business or tax reform to be sufficient to flout the historical pattern.

The supporting graph, below, doesn’t seem particularly good evidence for the claim, showing the stock continuing to climb for a considerable time after the launch of the iPhone 6, and with the iPhone 7 bucking the trend. Further, arguing on the basis of a dubious pattern rather than taking into account the radical improvement offered by the iPhone X seems to defy logic. 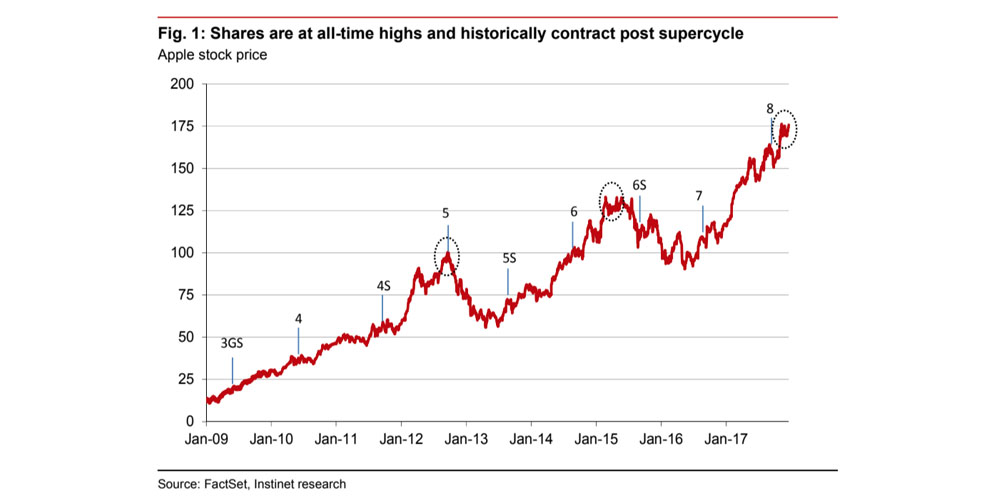 All recent reports point to strong iPhone X sales. KGI said last month that demand and growth were both strong. A subsequent report suggested 6M sales over the Black Friday weekend. IHS Markit predicted that the iPhone X will drive a full year of growth. And analytics data indicates that the iPhone X overtook the iPhone 8 and 8 Plus in sales (though not the two models combined).