A new report from Barron’s takes an in-depth look at what could make 2018 the year Apple will reach a $1 trillion dollar market capitalization. With its iPhone X, potential China growth, share buyback efforts, recent tax reform, and more, Apple has a lot of momentum going.

Barron’s says that “it’s a good time to re-evaluate the stock” with its market capitalization hovering around $900B and the impending growth of revenue around iPhone X and its booming services.

Other statistics include Apple growing its earnings per share 11% with it buyback efforts and AAPL shares saw 50% growth for the year.

Barron’s believes that Apple is achieving more stable year-to-year performance, which could be important for building more confidence with investors.

Apple seems to be escaping its product supercycle peaks and troughs to post more-consistent year-to-year growth. That could have a lasting effect on the stock’s valuation, based on what Wall Street pays for other steady growers.

Compared to the S&P 500 which saw 56% growth since 2014, AAPL has posted 147% growth. Investor’s are noting that Apple is much more than just a device maker and the potential of its services.

“Apple isn’t just selling you a phone,” says David Pearl, co-chief investment officer at Epoch Investment Partners, which manages $48 billion, including a $900 million position in Apple begun 10 years ago, around the launch of the original iPhone. “It’s selling you the easiest, most elegant experience for mobile communications and computing, and its services revenue is growing faster than its products.”

Apple has an estimated 900 million customers at this point. Although its services only make up 13% of its revenue, it accounts for 20% of its profit.

Another point in Barron’s case for Apple hitting $1 trillion next year cites research from UBS that Apple has the highest smartphone customer retention rate at 85% compared to 71% for Samsung.

While there is concern among many analysts about future iPhone sales, fund manager John Barr isn’t as concerned about iPhone upgrade cycles as he sees it as much more than just the handset.

When you get down to where we are in the iPhone cycle, I don’t care.

The smartphone isn’t just a product. It’s an indispensable platform for its users’ lives, where Apple continues to add value with software and services.

Barron’s provides is a look at historically stable companies like Kraft Heinz. Interestingly, Apple’s performance has been more and more consistent, even more so than Kraft and Starbucks. 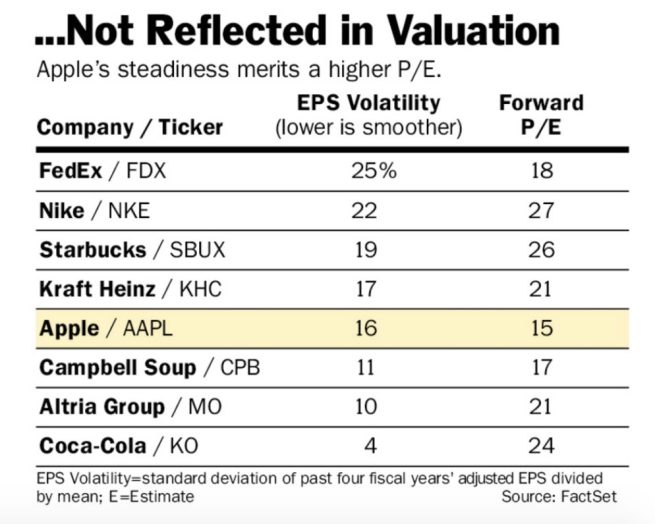 Barron’s predicts that if Apple buys enough of its shares back to leave 500 million on the market, it would need its price/earnings ratio to grow from 14.7 to 16.6 to achieve the $1 trillion mark ($200/share at 500 million shares).

At this point Barron’s believes the Chinese market is a “wild card,” with predictions varying for this last year’s growth.

One Apple bull is Morgan Stanley’s Katy Huberty, who believes that Apple’s China growth has been near 70% this year. Conversely, many Wall Street analysts are projects closer to just 15% growth this year.

If Apple indeed has seen stronger growth than expected in China, and will continue to see the same next year, this could move it closer to hitting $1 trillion.

Another boost for AAPL will come from its opportunity to repatriate its overseas cash at a one-time 15.5% tax rate.

Epoch’s Pearl reckons Apple could get a mid-single digit boost to ongoing earnings from the lower tax rate, and as much as a 7% increase from bringing home cash and buying back stock.

There are surely many more clever ideas than these. But investors who study patent filings or track rumor sites for signs of Apple’s next breakthrough are overcomplicating matters. Watch instead the $14 billion in yearly research spending, the smoothing out of earnings, and the still-modest stock valuation. Watch Cook, who might lack the showmanship of Jobs but has quietly presided over $450 billion in market value creation. And watch Apple prove the skeptics wrong again.

The full Barron’s article is definitely worth a read.