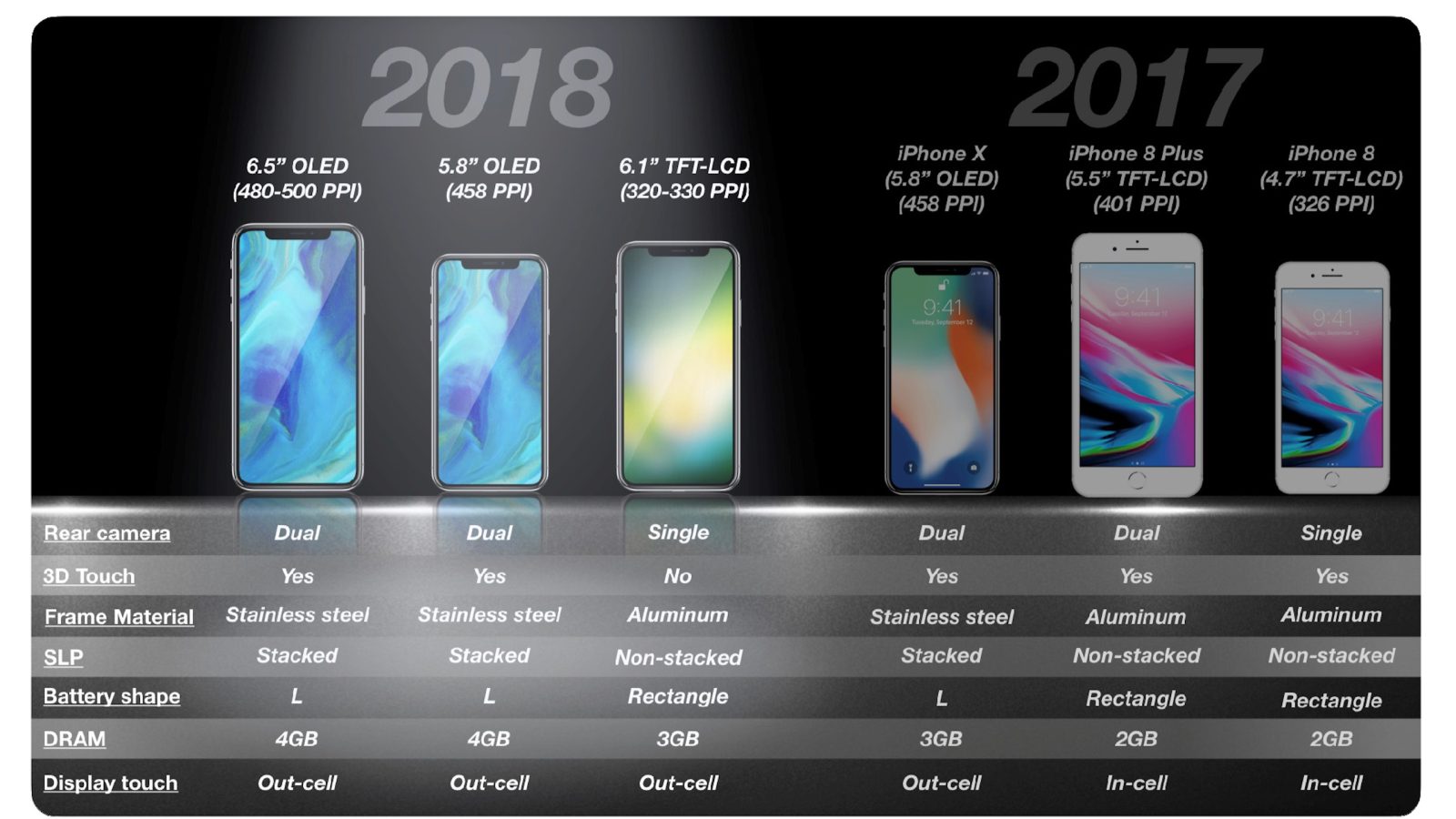 Reliable Apple analyst Ming-Chi Kuo of KGI Securities is today out with a trio of new investor notes that offer some additional color on the supplier breakdown for this year’s new iPhones. The analyst has previously stated that Apple will introduce three new iPhones this year, including two OLED models at 5.8-inches and 6.5-inches, and an LCD model at 6.1-inches…

Firstly, KGI offers a few more details on this year’s iPhone lineup in terms of battery tech. Kuo says that the 6.5-inch OLED model will pack an L-shaped battery between 3,3000 and 3,400mAh, with supplier Unimicron acting as the leading producer. Meanwhile, the 5.8-inch OLED iPhone is said to include a 2,700 to 2,800mAh battery, again supplied primarily by Unimicron.

For comparison’s sake, it doesn’t sound like this year’s 5.8-inch OLED iPhone will have a larger battery than the iPhone X, which packs a 2,716mAh L-shaped battery.

As for the 6.1-inch LCD model, Kuo predicts a 2,850 to 2,950mAh battery in rectangular shape. This is larger than the iPhone 8 Plus battery, though it features the same rectangular and single-cell design, which doesn’t necessarily bode well for thickness and weight.

As for investor reactions to the 2018 iPhone lineup, Kuo says the sentiment is “conservative due to concerns about a lack of major spec upgrades.” On the other hand, Kuo predicts the market will appreciate the 6.1-inch LCD iPhone, which he says will account for around 50 percent of the new models sold in the second half of 2018.

Kuo writes that the “lower-than-expected” iPhone X shipments are due primarily to the high price of the device, thus making the 6.1-inch LCD model attractive to customers. The LCD iPhone is expected to feature the same notch design as the iPhone X, as well as Face ID, but will reportedly lack 3D Touch and a rear dual-camera system.

As for a release schedule, Kuo predicts that the 6.1-inch iPhone faces a “slightly deferment of the development schedule,” but that all three models should be ready for market by September.

Kuo has previously predicted three iPhone models for 2018 and said that the 6.1-inch model will be priced between $700 and $800. We’ll likely learn more as this year progresses.