New data from Canalys today shares details on Apple Watch shipments, and 2017 was a big win for Apple’s wearable. The reports says that Apple beat expectations with sales of 18 million units.

Apple doesn’t share details for its smartwatch sales, but it did mention that it was the “best quarter ever for Apple Watch, 50 percent unit growth for 4th quarter in a row.”

Canalys’ data says that 2017 Apple Watch sales grew 54% compared to 2016. The report notes that Apple Watch Series 3 was the main driver of the huge growth with 48% of sales coming from the latest model.

It’s really interesting to see the graph below illustrating just how many customers were waiting for the updates that came along with Series 3.

With an initially limited global rollout of the cellular Series 3, Apple has even more opportunity for strong growth this year with Apple Watch.

Moving into new markets, such as Singapore and Hong Kong in Q1 2018, just in time for Chinese New Year, is a good move.

We reported last May that Apple Watch had become the world’s most popular smartwatch. It looks like 2017 only solidified its lead.

Apple has pulled far ahead as it continues to focus on its core iPhone user base. Its recent updates to the Series 3, such as GymKit and Apple Heart Study, are proving to offer compelling use cases, encouraging users to spend more on accessories.” 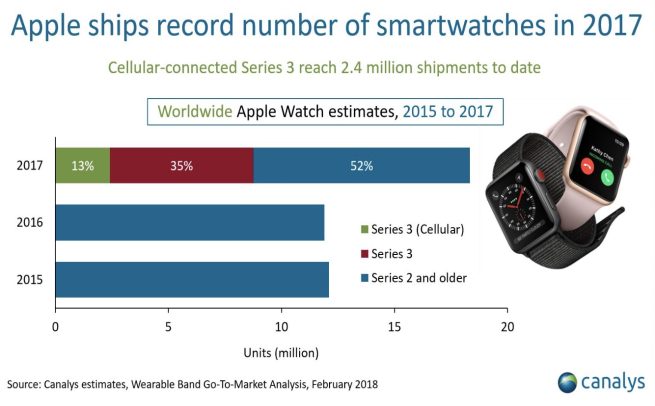