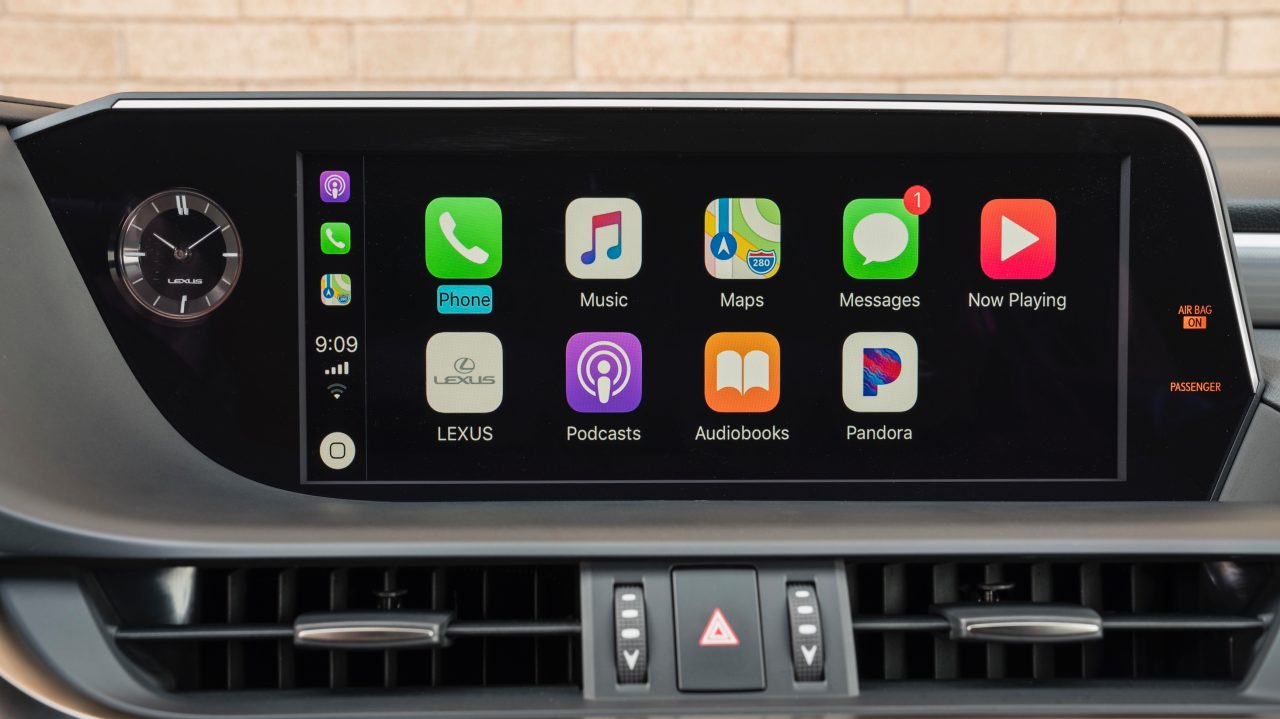 This is the year Toyota and Lexus — among the last major CarPlay holdouts — finally release new cars that work with Apple’s infotainment system.

Lexus announced today that its seventh generation ES luxury sedan will be its first model to include CarPlay, and customers will have an option for a 12.3-inch widescreen display that makes room for two extra apps on the Home screen.

CarPlay has supported displays with wide aspect ratios since iOS 9 in 2015, but Lexus is shipping the first I’ve seen on a stock or aftermarket solution to date. [Update 4/27: One reader reports CarPlay working on their 2017 Mercedes E300 with widescreen as well. Good to know!]

The 2019 model Lexus ES will ship with a standard aspect ratio (but still large) 8-inch display at the entry level, however, with the wide screen option included in models that include navigation.

CarPlay relies on Apple Maps and the GPS in your iPhone for navigation so built-in navigation is merely a second option, but the wide screen is a novel feature.

The flip side of CarPlay from Lexus is neither the 8-inch nor 12.3-inch screens are touch; both rely on the car’s Remote Touch Interface trackpad for control (which is why the Phone app label has a weird blue box around it in the promo shot). CarPlay is also wired so you’ll still want to opt for BMW (or Mercedes in the fall) if buying a new car with wireless CarPlay.

The 2019 Lexus ES goes on sale in September. More about the tech specs from Lexus below:

Staying connected has never been so important to ES owners, so there are now multiple ways to engage with technology in a safe and convenient manner. For example, the seventh-generation ES is the first Lexus product to offer Apple CarPlay™ phone functionality, enabling drivers to control their iPhones® through the dashboard display screen or with Siri Eyes Free® voice control.

The ES is also Amazon Alexa®-enabled, so drivers can use natural language commands to control a variety of functions. That functionality includes car-to-home and home-to-car commands, so owners who have Alexa enabled devices in their home can interact with their ES before they ever get behind the wheel.

On board Wi-fi powered by Verizon is also available on the ES as part of an optional navigation system that includes an easy-to-read 12.3-inch wide dashboard display. Along with its on-board data set, the navigation system is also capable of receiving over-the-air updates for improved routing and the latest Points of Interest (POIs).  Models without navigation will use an 8-inch display and all interactions will be controlled through the Remote Touch Interface (RTI) trackpad.