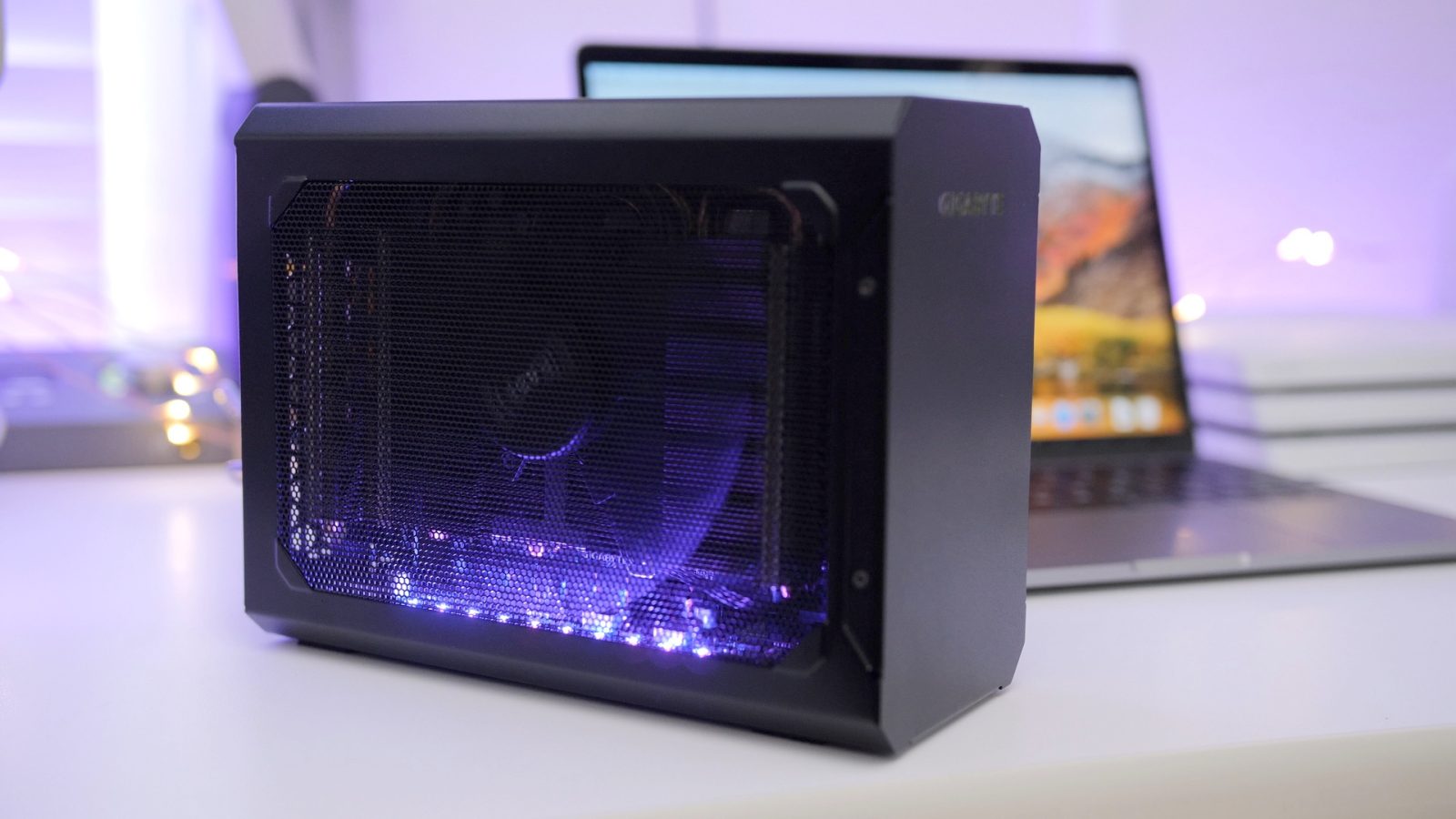 If you’re looking for an eGPU that doesn’t occupy a lot of desk real estate, you basically have two options — the Sonnet eGFX Breakaway Puck, and Gigabyte’s just-released RX 580 Gaming Box.

Whereas the Sonnet option comes with an RX 570, Gigabyte packs a more powerful RX 580 inside an area that’s a little bit larger than the Breakaway Puck. Should MacBook Pro users looking for a portable eGPU solution consider the RX 580 Gaming Box? Watch our hands-on video inside for more details.

The term “Gaming Box” is an interesting way to describe Gigabyte’s portable GPU — at least for macOS users. Even with an eGPU, gaming performance on macOS isn’t usually as good as gaming performance on Windows. That said, MacBook Pro users with underpowered integrated graphics stand to gain a significant increase in frames per second and overall performance by adopting an eGPU. It can be the difference between a game being completely unplayable, and one that runs decently with mid-tier and sometimes high quality settings.

All of this is old news, of course. I’ve done numerous posts on testing eGPU performance increases using my 2017 13-inch MacBook Pro with integrated Intel Iris Graphics. If you’re looking for an immediate boost for your underpowered MacBook Pro to pair with an external display, then an eGPU may be up for the task.

But it’s the portability of the RX 580 Gaming Box that makes it so impressive and unique. The unit is extremely small, yet packs the power of an RX 580 inside; the dimensions for the box are roughly 8.25-in x 6.5-in x 3.5-in.

Obviously a full size eGPU unit like the Akitio Node Pro has more custom GPU config options and absolutely dwarfs the Gaming Box, but therein lies the attractiveness of such a small product. 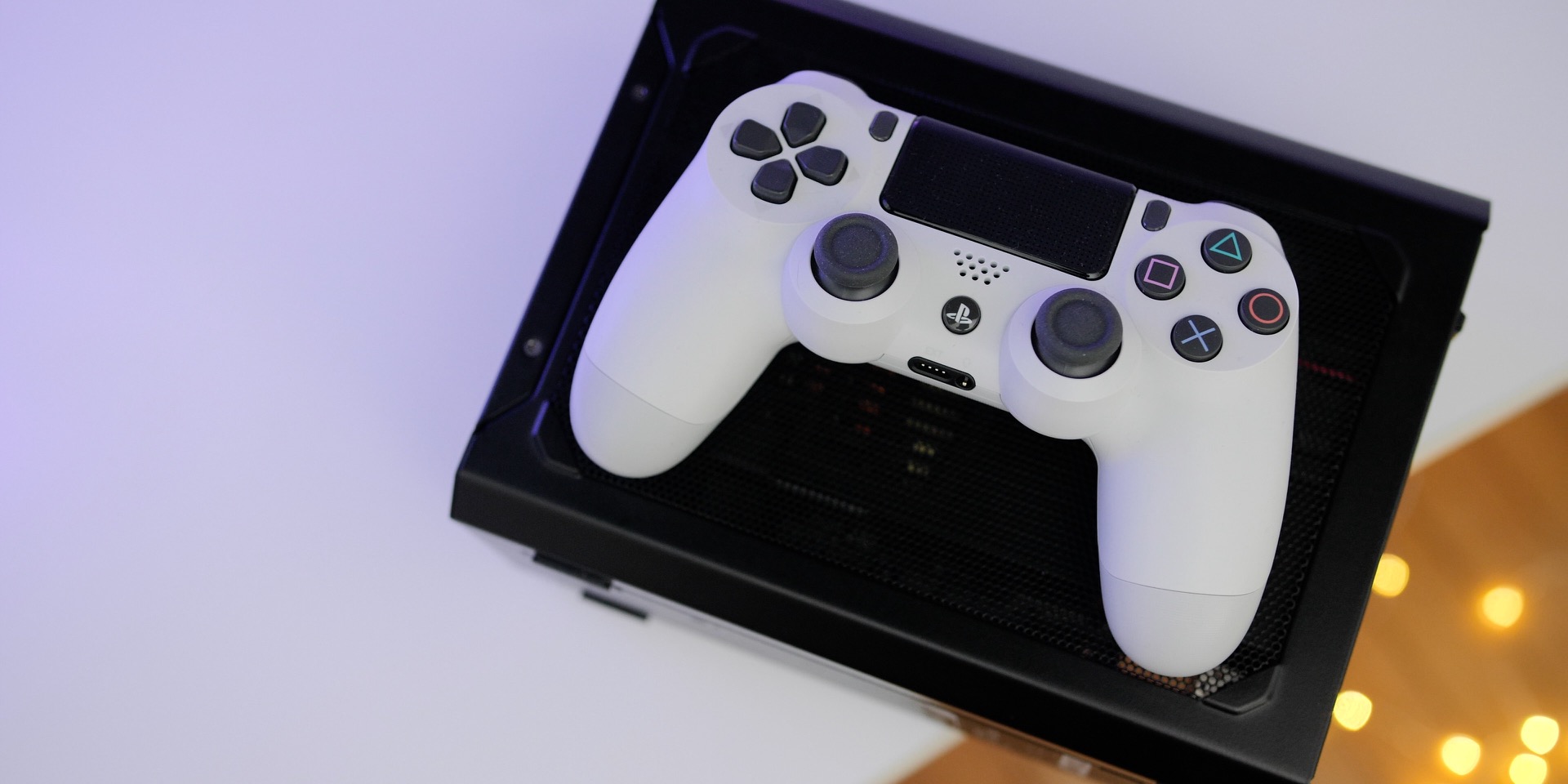 The Gigabyte RX 580 is truly portable, thanks to its mini-ITX RX 580 with custom cooling solution, portable enough to seriously consider traveling with on the go. It even comes with a specially fitted travel bag that looks like a little lunch box. 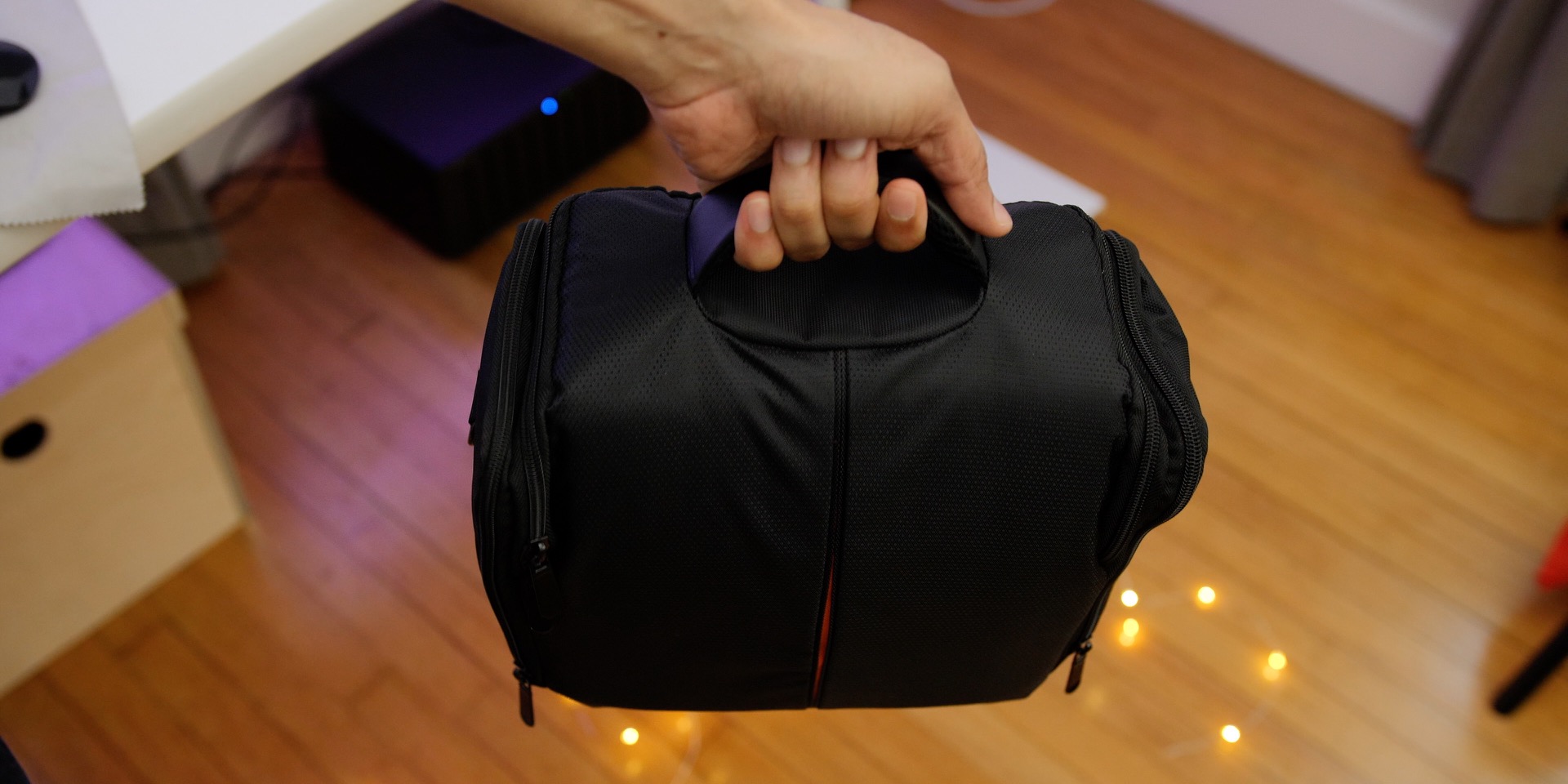 What really sold me on the Gaming Box is the way that the unit’s 450W PSU is totally integrated inside of the enclosure. In other words, there is no large power brick that you have to lug around, just a cord for connecting the unit to the wall.

The aforementioned Breakaway Puck from Sonnet is smaller than the Gaming Box, but its extra-large power brick puts a bit of a damper on the portability angle. 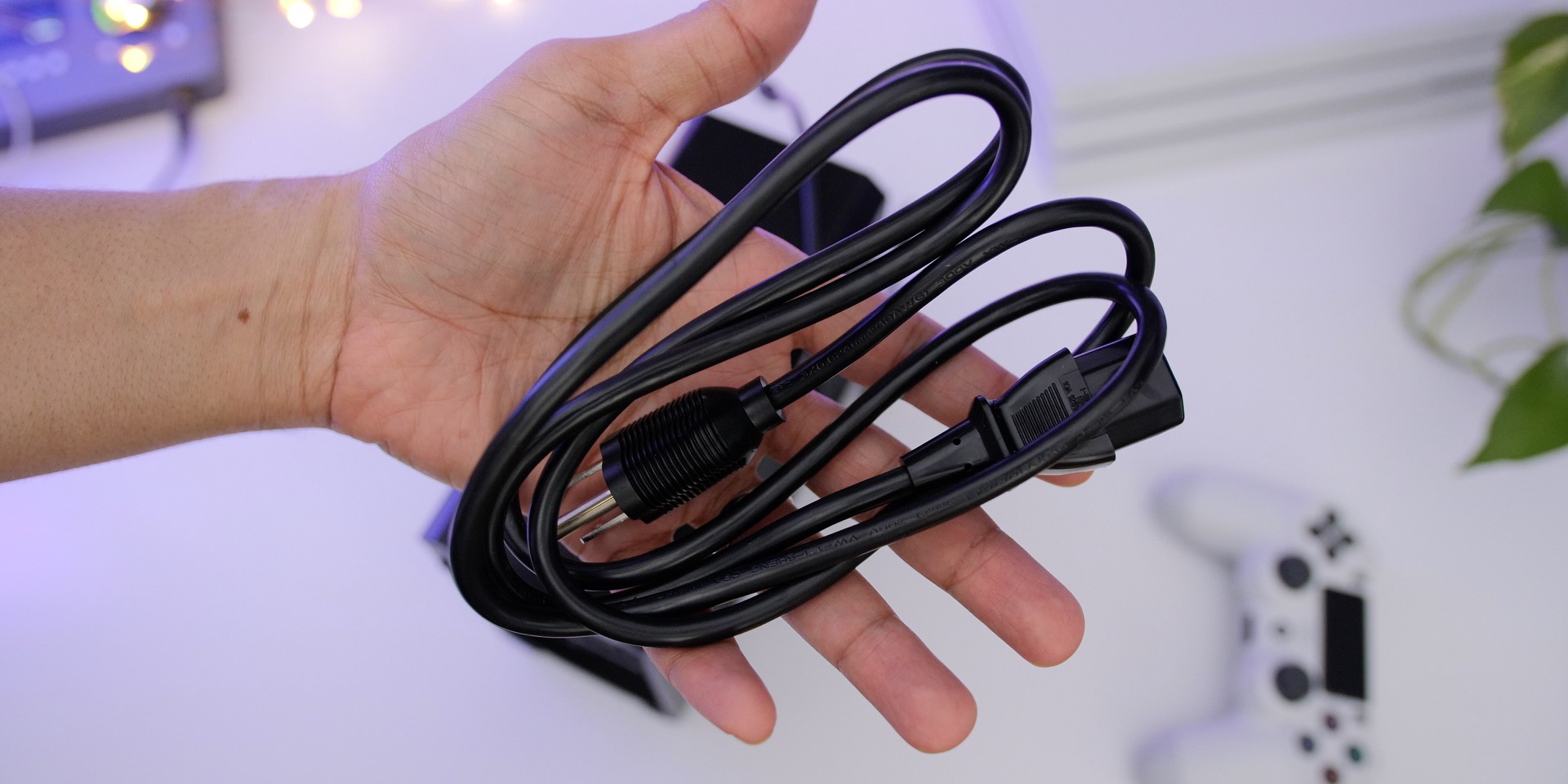 When I first got the Gaming Box, I was sure that it would run very loud and hot considering the small size of the enclosure. I was surprised to find that the heat is managed extremely well, and the unit stayed cool enough to keep my hand on every area of the enclosure except the rear I/O plate.

Unfortunately, I don’t have a decibel meter for sound measurement, but the unit wasn’t nearly as loud as I expected it to be. There was also no audible coil whine, which has been a common occurrence on most of my other eGPU setups. 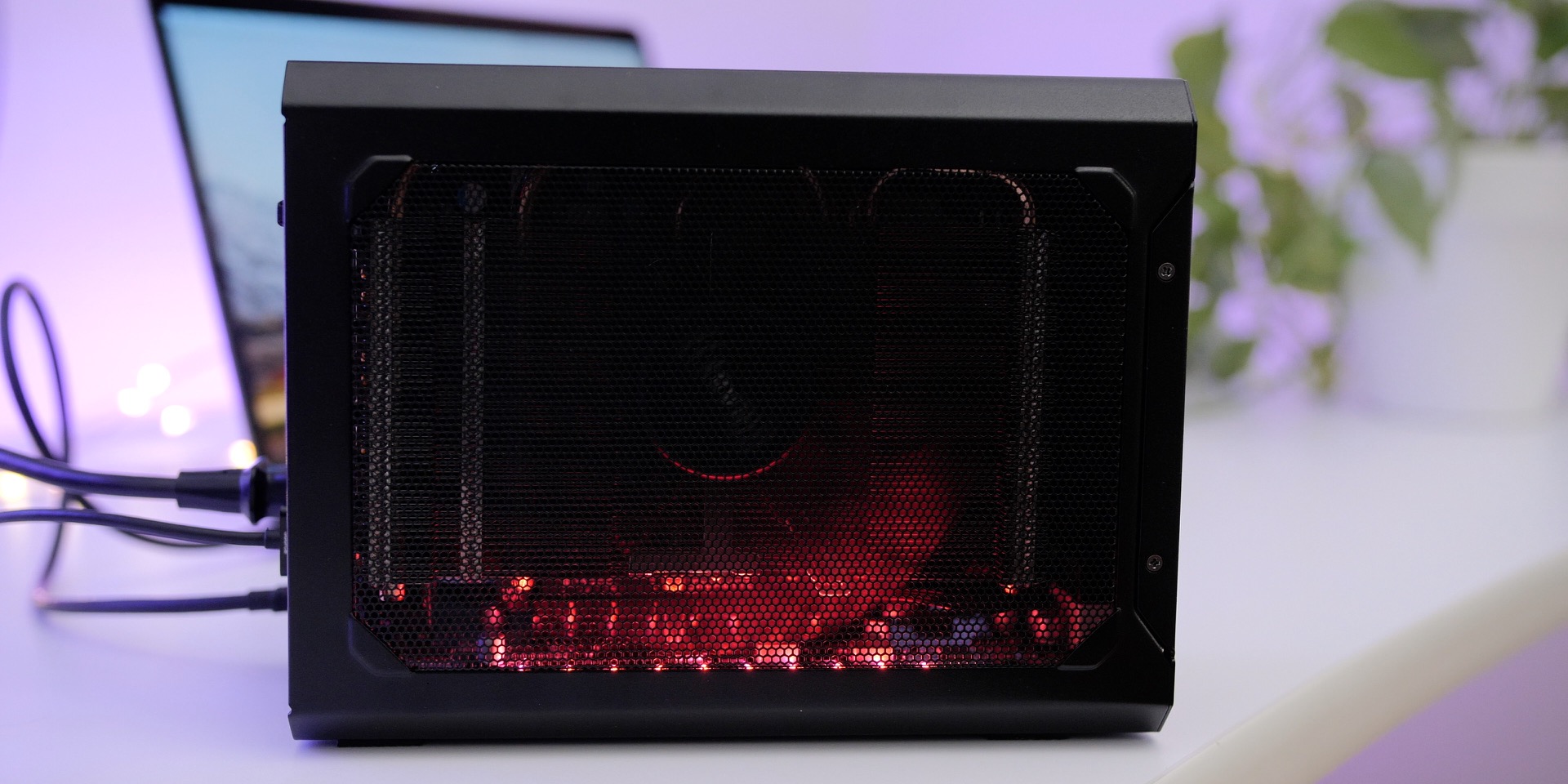 Once you connect the included Thunderbolt 3 cable from the eGPU to an eligible Mac, the Gaming Box turns on with RGB lighting in tow. Sadly, macOS users cannot customize the RGB lighting patterns like Windows users can, but an option to do so might be available later on down the line. 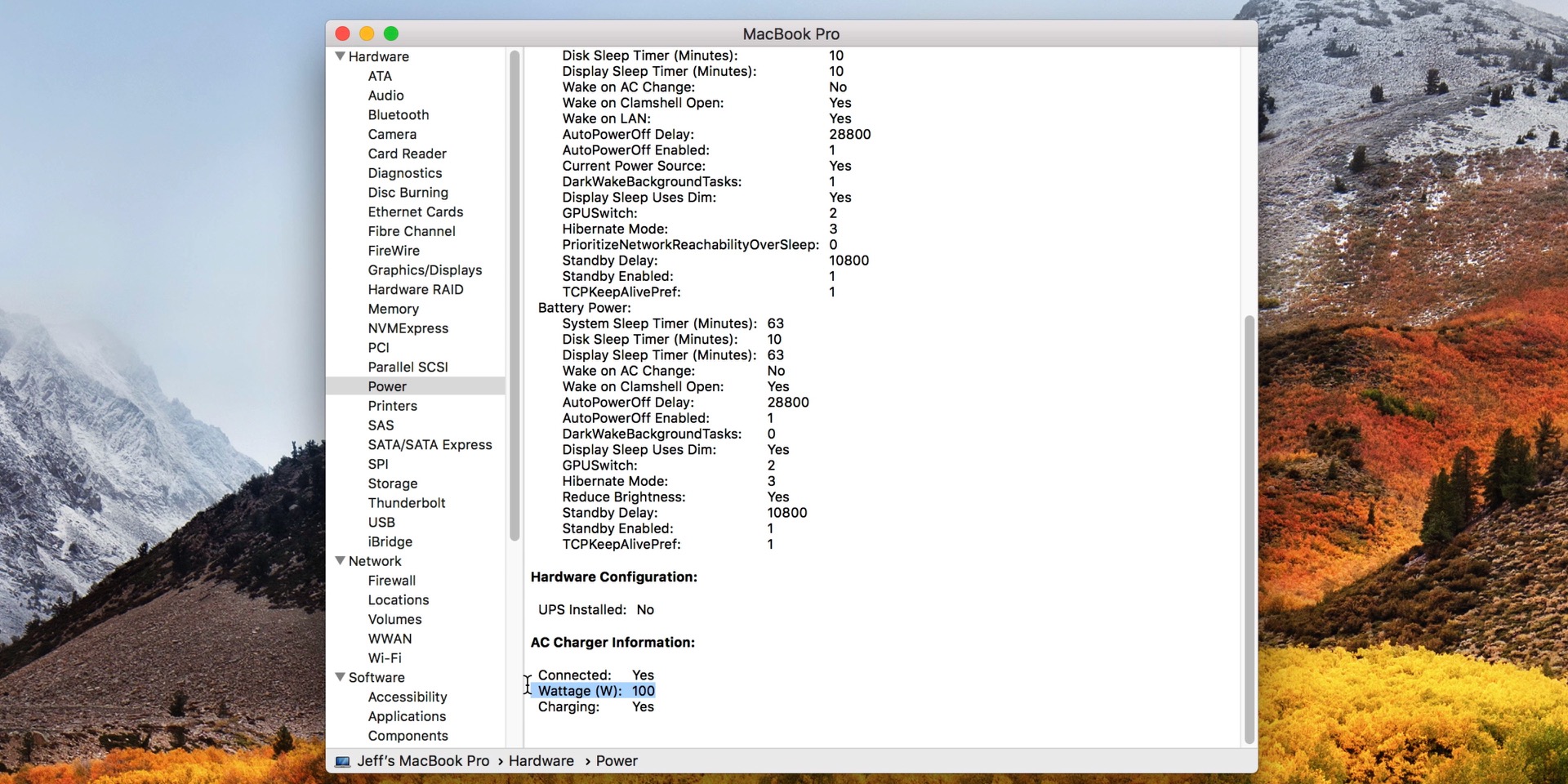 One notable benefit of the RX 580 Gaming Box is its power delivery capabilities. This little box can charge any Thunderbolt 3-enabled MacBook Pro at full speed, delivering up to 100W of power. 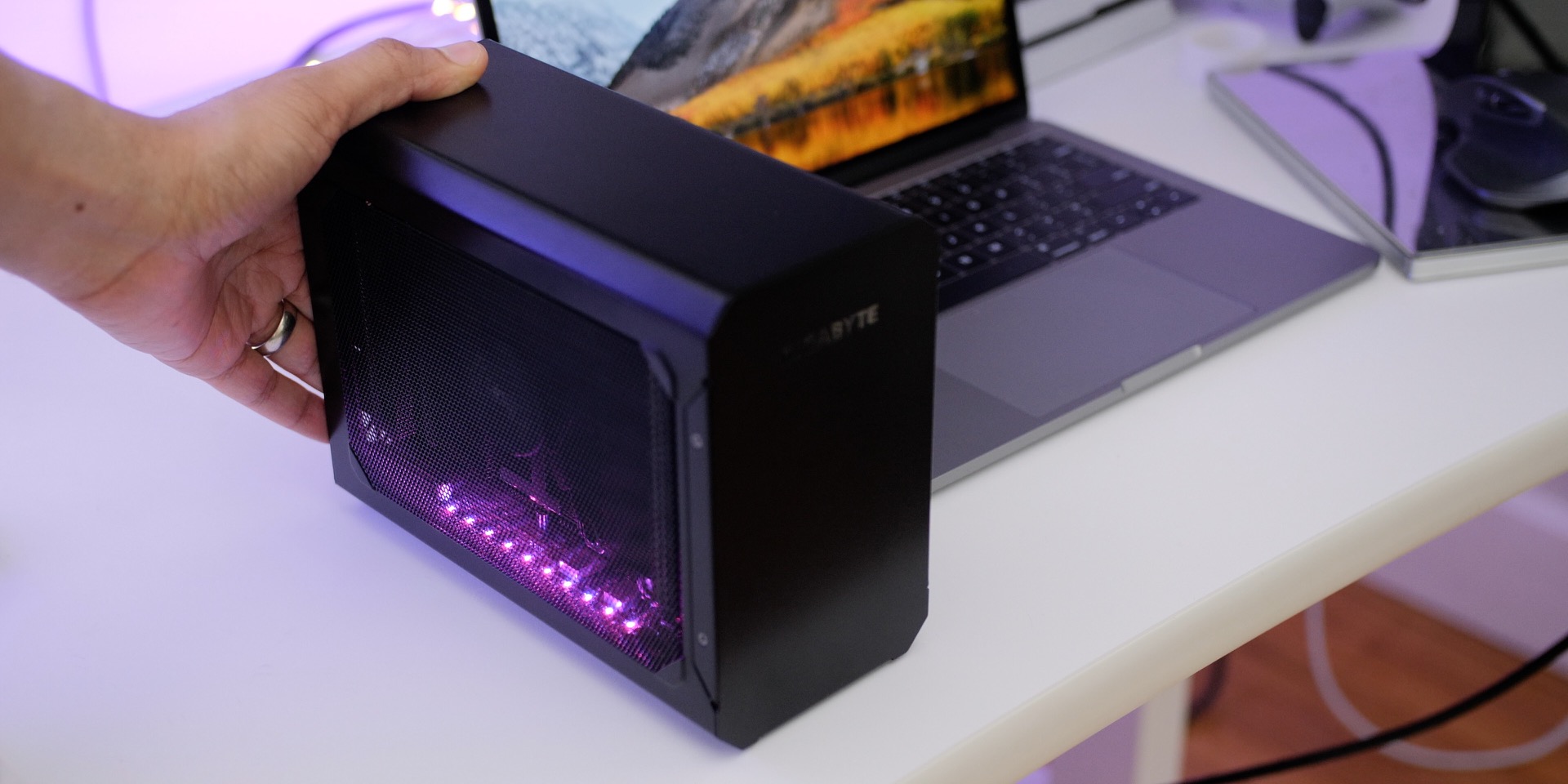 I performed the typical trio of OpenGL benchmarks to see where the Gaming Box stood as far as basic GPU accelerated gaming performance was concerned. What I found was exactly what I expected, the Gaming Box performed similarly to my previous RX 580 benchmarks in other external GPU enclosures.

As you can see, the 2017 13-inch MacBook Pro benefits heavily from GPU assistance. In all cases, performance was notably better than standalone iGPU performance with Intel Iris 640 Graphics. Not at all unsurprising, but it’s good to know that the performance more or less matched that of my standalone full-sized ASUS ROG RX 580 in a full-sized eGPU enclosure like the Akitio Node Pro or the Sonnet eGFX Breakaway Box.

The biggest problem with eGPUs right now in macOS is the lack of eGPU-accelerated assistance across mainstream apps like Final Cut Pro X. I imagine that most macOS users who are interested in eGPU setups are mostly interested in the performance enhancements that can be gained in pro apps. With this in mind, although the RX 580 is a capable card, noteworthy use cases this early into official eGPU support are still few and far between. 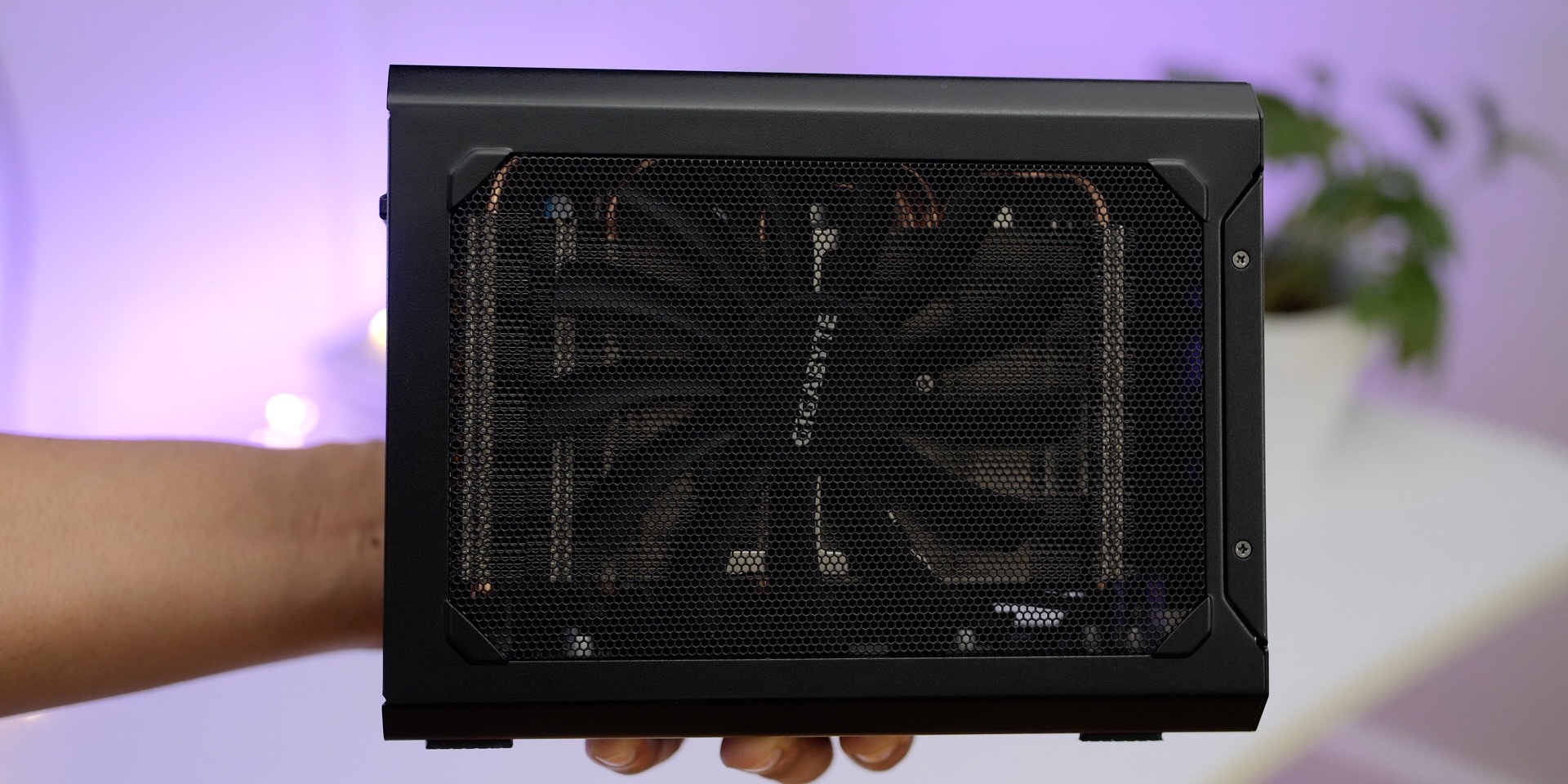 That’s not to say that eGPUs aren’t beneficial at this stage, because they can be. But you’ll want to have a particular use case in mind. For example, in a previous video I showed you how much a DaVinci Resolve workflow could benefit from an eGPU like the RX 580. The performance difference, especially compared to my 13-inch MacBook Pro’s integrated graphics was night and day.

In my opinion, this is the best portable eGPU unit for macOS users. Not only is its small size attractive, but the fact that it comes with a travel bag and there’s no bulky power brick means that it’s easily portable. Having this sort of power readily on tap wherever you take your MacBook Pro is a nice feature, and little details like USB 3.0 ports make for a convenient addition. 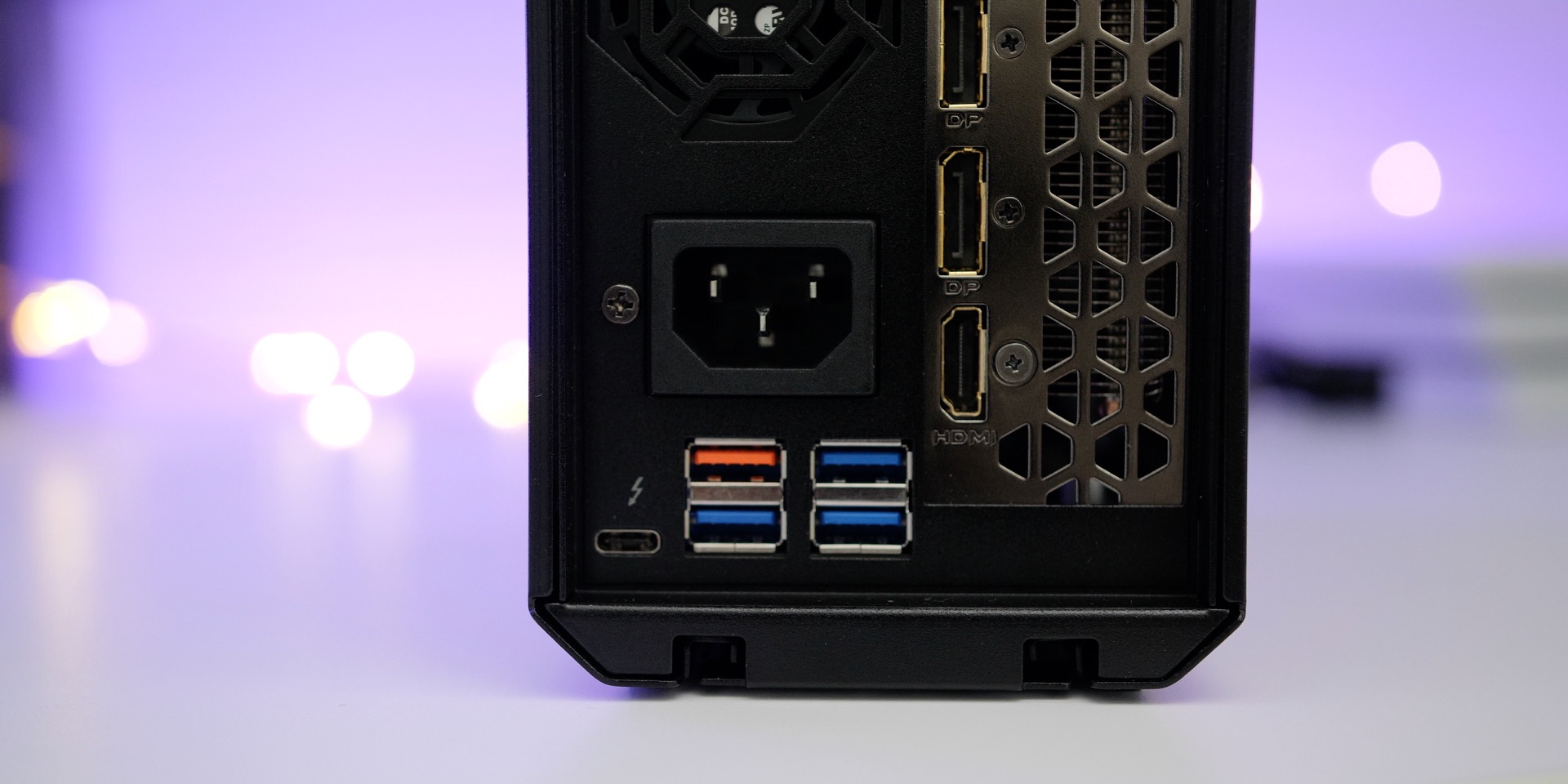 Three USB 3.0 ports along with a Quick Charge 3.0 port on the rear

The Gaming Box is also relatively quiet, and doesn’t get nearly as hot as one would think given its small size and fully integrated PSU. If you’re in the market for an eGPU and portability is a must, then the RX 580 Gaming Box makes for a compelling option.

Gigabyte also produces an Nvidia variant with a GTX 1080 inside, but Mac compatibility will need to rely on workarounds that are currently being developed since macOS doesn’t yet officially support Nvidia eGPU setups. 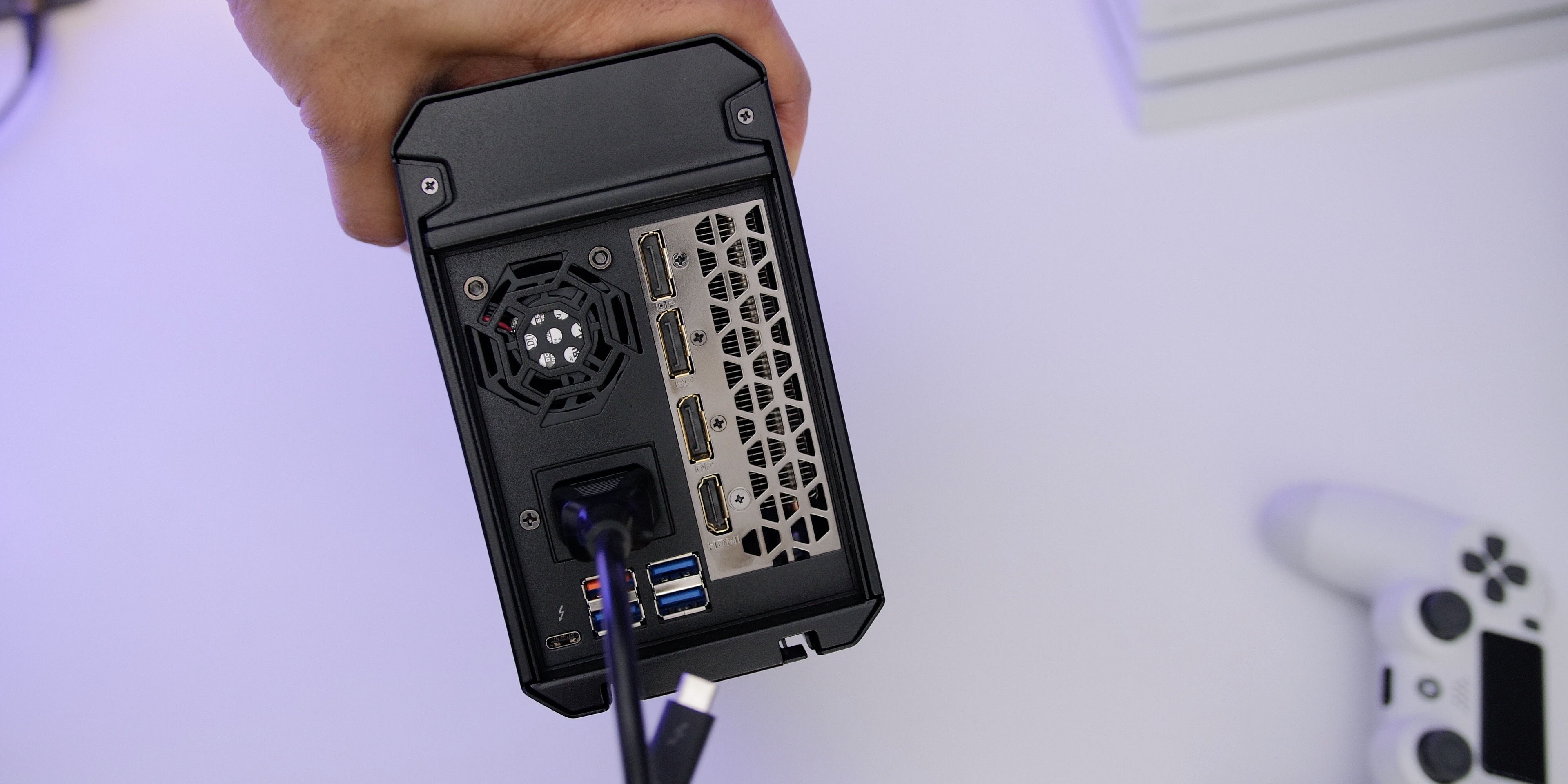 This probably isn’t the box you’ll want to buy if you want the utmost flexibility and future ability to upgrade. You’ll instead want to consider the Sonnet eGFX Breakaway Box 650W for that. But if portability is at the top of your list, then this is the option I recommend considering.

Note that the RX 580 Gaming Box isn’t on Apple’s official list of supported eGPU enclosures, but I can vouch for the fact that, like other external enclosures omitted from the list, it appears to work fine in macOS 10.13.4.

The Gigabyte RX 580 Gaming Box is officially on sale now for $599 at Newegg, but it’s also available on Amazon. You can find more details on Gigabyte’s website if you’re interested in acquiring one.