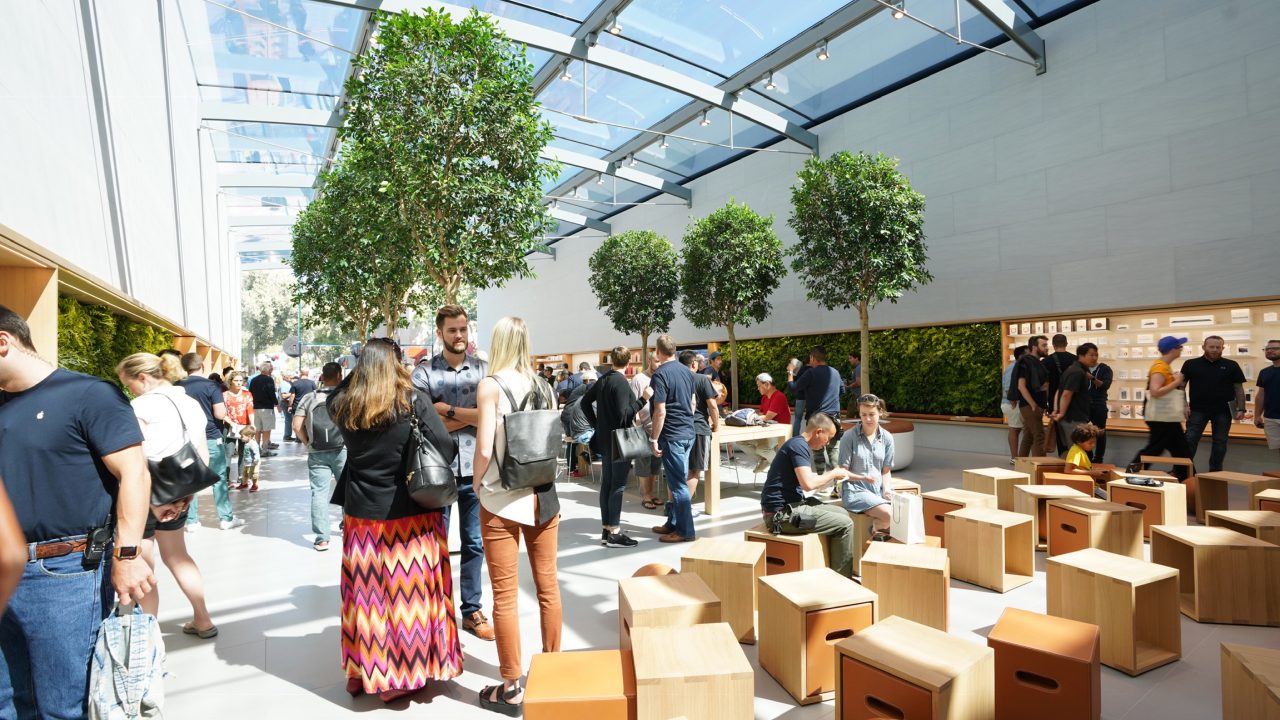 Just a short drive from Cupertino, Apple’s store on University Avenue in Palo Alto, CA reopened today after closing in May for renovations. The freshly remodeled store provides a unique glimpse into a new retail upgrade format for Apple. 9to5Mac reader Brian King stopped by the new store to take some photos.

From the outside, Apple Palo Alto looks much the same as it did after relocating from a smaller store just down the street in October 2012. Floor to ceiling glass panels welcome customers through the store’s doors, where a massive, glowing Apple logo is suspended above. An arched glass roof runs the length of the store suspended by stone walls that border three of the building’s sides. When the store opened, it was referred to as a “prototype” for the future of Apple’s retail design.

The changes begin after stepping inside. Gone are the narrow product tables and metal shelving that were once built into the store’s walls. In their place are new fixtures that will look familiar to anyone who’s visited a modern Apple store recently. Wood shelving and displays known as Avenues now line the sales area. These displays change seasonally and highlight current areas of Apple’s interest. A splash of greenery provides a quieter place to sit for a moment.

Across the back of the store, gone are any traces of the classic Genius Bar. In its place, a monolithic 8K video wall spanning to symmetrical doors in either corner of the store. Behind the sales area is nestled a luxurious Boardroom. For the first time, customers will have access to the full Today at Apple educational and community experience, where a mini Forum area has been created in front of the video wall. Potted trees with leather benches frame the seating area.

It remains to be seen if Apple has taken steps to mitigate the intensity of the midday sun inside the store, which often sent heat and glare in through the building’s glass roof. Apple’s new Cotai Central store in Macau has dealt with the issue through the use of translucent stone sandwiched between layers of glass.

If Apple Palo Alto’s renovations seem modest compared to other locations, it’s because they are. In fact, the store is the first to receive a half-remodel like this.

While Apple now operates over 500 retail locations worldwide, only about one-fifth are sporting the new design style first previewed back in 2015. One of the major unanswered questions until today was how Apple would approach rolling out such a massive upgrade project. Last year, older locations were minimally retrofit overnight with a few new fixtures. Existing refreshed stores have either been replaced altogether or closed for significant amounts of time during intensive demolition, expansion, and rebuilding.

For newer stores, such an extreme makeover seems unnecessary. By adding the elements central to the new store design – Avenues, a Forum, and a video wall – Apple can roll out a better experience more rapidly. Palo Alto’s store was closed for only 48 days total compared to nearly 8 months to rebuild the smaller Apple Bluewater in the UK.

Apple Palo Alto’s previous design. The store is a favorite stop for many Apple executives.

In China, Apple Causeway Bay is the second store to receive the more modest refresh. Genius Bar appointments are temporarily unavailable to customers as the multi-level store is being remodeled in sections while still open. On June 27th, Apple Covent Garden in London closed temporarily. Brand new in 2010, the store is still relatively new and will likely see similar changes.