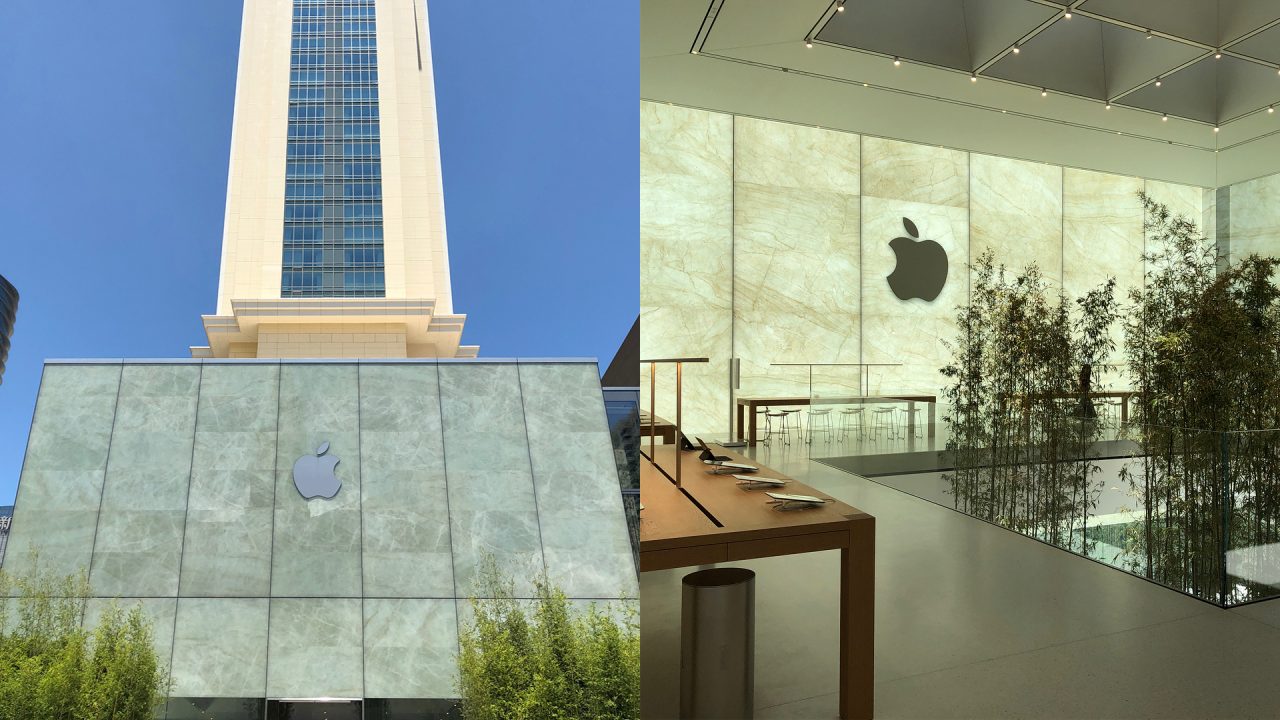 Ahead of its grand opening on June 29th, new details about Apple’s Cotai Central retail store paint the picture of a striking design never before seen in an Apple store.

Apple Cotai Central is the second Apple store in the Chinese district of Macau, and the first with a prominent view of the Cotai Strip, a bustling stretch of the city lined with luxury hotels, casinos, and other retailers. The store headlines “phase four” of the Sands Cotai Central resort.

We got our first look at the store back in April, when the structure was still under construction. Earlier this month, Apple covered the building in aquatic-themed banners to tease its imminent completion before confirming a 10:00 A.M. June 29th opening online.

With billowing landscaping flanking the store’s entrance and a bamboo grove extending to the ceiling inside the multi-level building, Apple Cotai Central has an extremely unique design, and stands in stark contrast to the company’s first and more traditional mall store in the region, Apple Galaxy Macau. The square footage of the building will lend itself well to the expansion of community initiatives like Today at Apple, which recently won the Brand Experience and Activation Grand Prix at Cannes Lions 2018.

In addition to decorative bamboo, Apple Cotai Central pioneers several other design elements. The Foster + Partners-designed structure features 1mm thick slabs of stone that have been laminated between sheets of glass in Switzerland. The manufacturing process results in a glossy material that creates a surreal, translucent stone wall around the store. The effect allows natural light to pass through without letting in harsh shadows and midday heat.

Above, a 9-segment skylight pours sunlight onto the bamboo grove below, where saddle brown leather benches lie in front of an 8K video wall. Avenue displays border the perimeter of the sales area. For the evening hours, horizontal LED light bars line each table for additional visibility. Apple used a similar design in their Grand Central store.

Outside of the main sales floor, stone stairs lead to an upstairs balcony with dramatic views. Members of the press were invited to a media preview ahead of the store’s opening, where they were able to tour the facility and the store’s boardroom, which has been decorated with photos of Apple Park, Naoto Fukasawa Hiroshima chairs, and an Atollo lamp among other items.

Shortly after Apple celebrates a grand opening in Macau, it will permanently close a store in Atlantic City, NJ on June 30th. On the same day, Apple Palo Alto in California will reopen after a remarkably quick 48-day renovation, and Apple University Village in Seattle will move to a striking new structure.

Update: photos from the grand opening:

Check out more photos below, and follow along with our Apple retail guide for more store news.