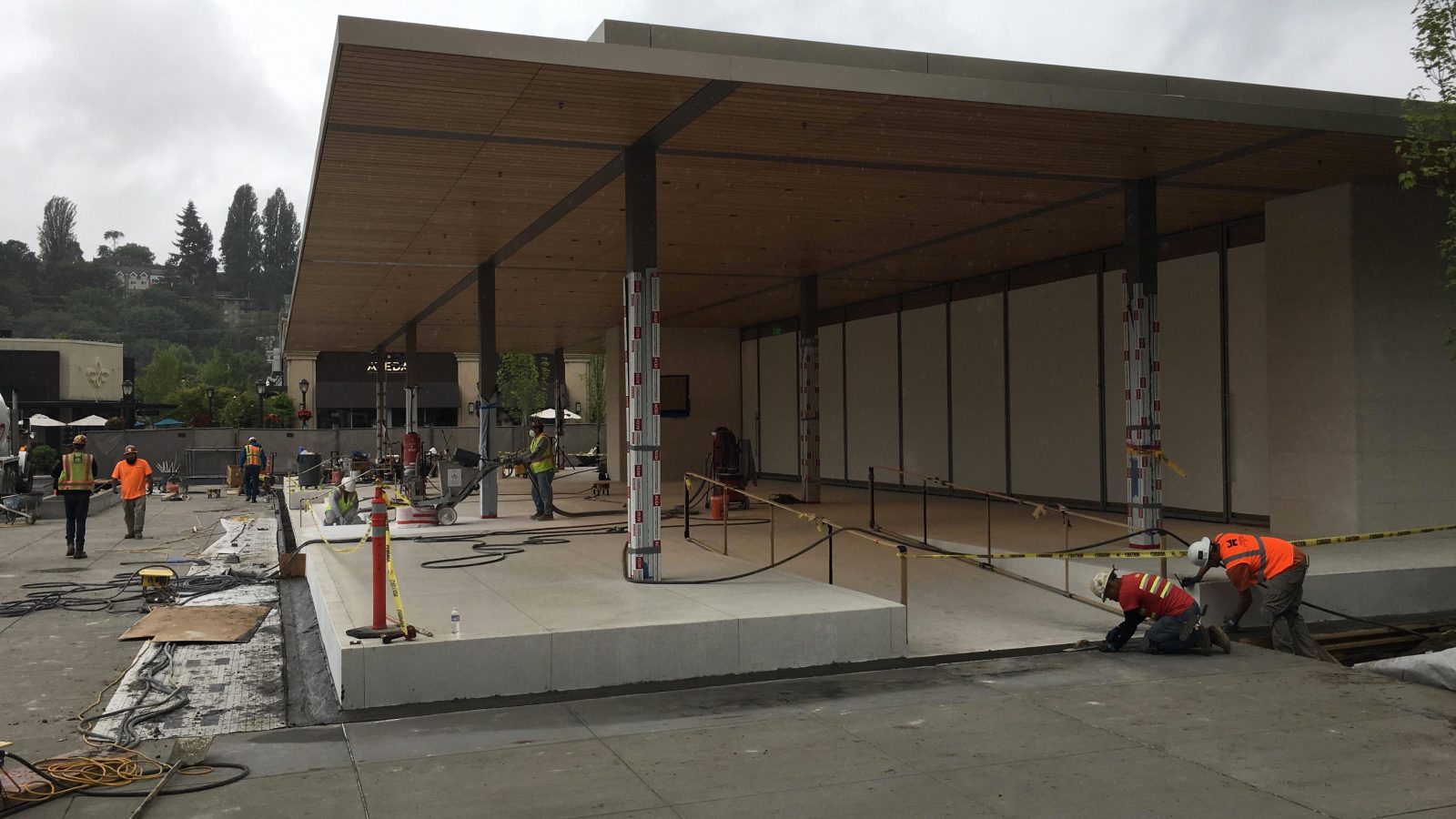 After more than a year of construction work, Apple’s large new store located in Seattle’s University Village shopping center will soon be complete.

Since initial groundwork began early last year, images of the store under construction have shown continuous but metered progress as the structure rose. Known as “Village Green,” the project site was formerly a parking lot in the shadows of Apple’s current University Village store, a location that has been in operation since 2003. Crate and Barrel and Microsoft stores frame the north and west sides of the building.

Last year, the Seattle Times reported that the 11,600 square foot building would house just over 6,300 square feet of retail space. In a new photo posted to Reddit, we see our clearest view of the store yet, revealing a spacious public plaza at the front of the building partially sheltered by a wood-lined overhang. Wheelchair-accessible ramps lead to a sweeping glass facade. Thick, Moca Creme limestone walls with Apple’s signature rounded corners bookend the east and west sides of the building. 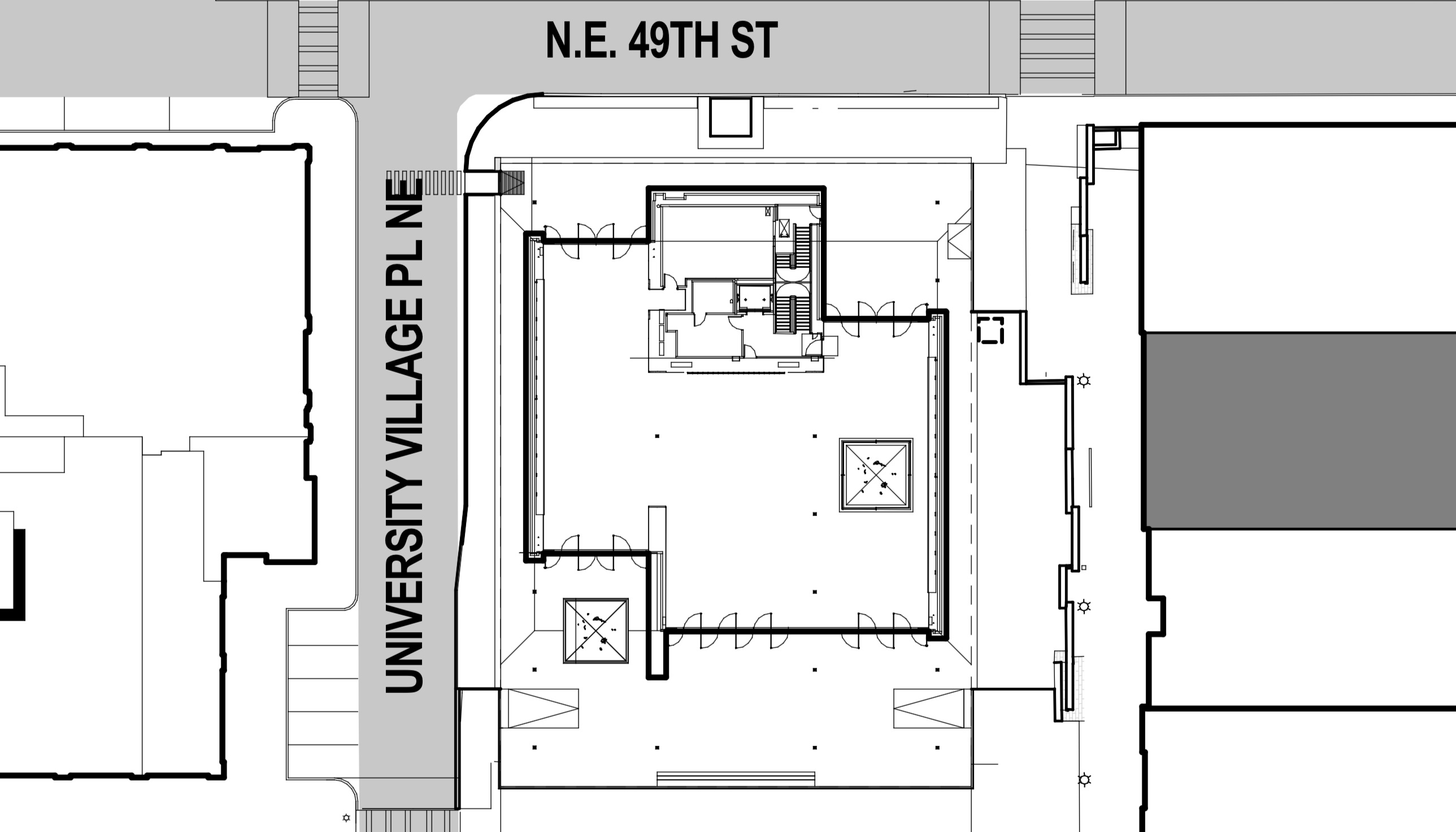 Blueprints filed with the city of Seattle describing future renovations to Apple’s current U-Village location reveal more details about the store’s layout, which has been designed under the direction of architecture firm Foster + Partners. Staggered front and back walls divide the building into several open zones including a back of house area leading to a basement. Avenue display cases appear to flank both stone walls, with room for a large video wall on the north end of the building. Two skylights are shown.

The store’s design borrows heavily from concepts used in some of Apple’s most impressive new stores, like Michigan Avenue, Downtown Brooklyn, and Apple Park Visitor Center, all of which feature wooden ceilings and track lighting rather than the glowing light panels used in the majority of modern Apple stores. Other elements are reminiscent of the recent Domain NORTHSIDE location in Austin and the upcoming redesign at Southlake Town Square, also in Texas.

A series of videos posted on Snapchat from inside the construction site since mid-April have documented the recent pace of progress. With framing and major structural work complete, efforts have been directed toward the pouring and finishing of the plaza at the front of the building. The floors will most likely be white terrazzo throughout.

Apple rarely announces the opening of new stores more than a few weeks ahead of time, but it’s not unreasonable to imagine that a grand opening could still happen sometime this summer.

Ideally, the store would open before the start of the fall semester at the nearby University of Washington. For residents of the greater Seattle area, the new location will help ease the overcrowding issues that have become common at smaller Apple stores. Earlier this year, Apple Alderwood Mall in nearby Lynnwood, Washington closed for renovations, adding to the congestion.

Separately, a new report from Bloomberg today notes that Apple has decided to permanently close their store in Atlantic City, New Jersey. The small shop in The Playground Pier adjacent to Caesar’s Atlantic City has seen a significant decline in traffic thanks to dwindling tourism in the area. 52 workers are expected to be impacted. Although Bloomberg’s report doesn’t mention a specific closure date, 9to5Mac has heard the store will likely close as of June 30th.

This week also marked the one year anniversary of Today at Apple’s worldwide rollout. The series of ongoing education and community driven sessions is a core part of Apple’s modern retail strategy. The layout and design of Apple’s new University Village store will be a key component in expanding the full Today at Apple experience to more customers.

For more Apple store news, keep up with our retail guide.