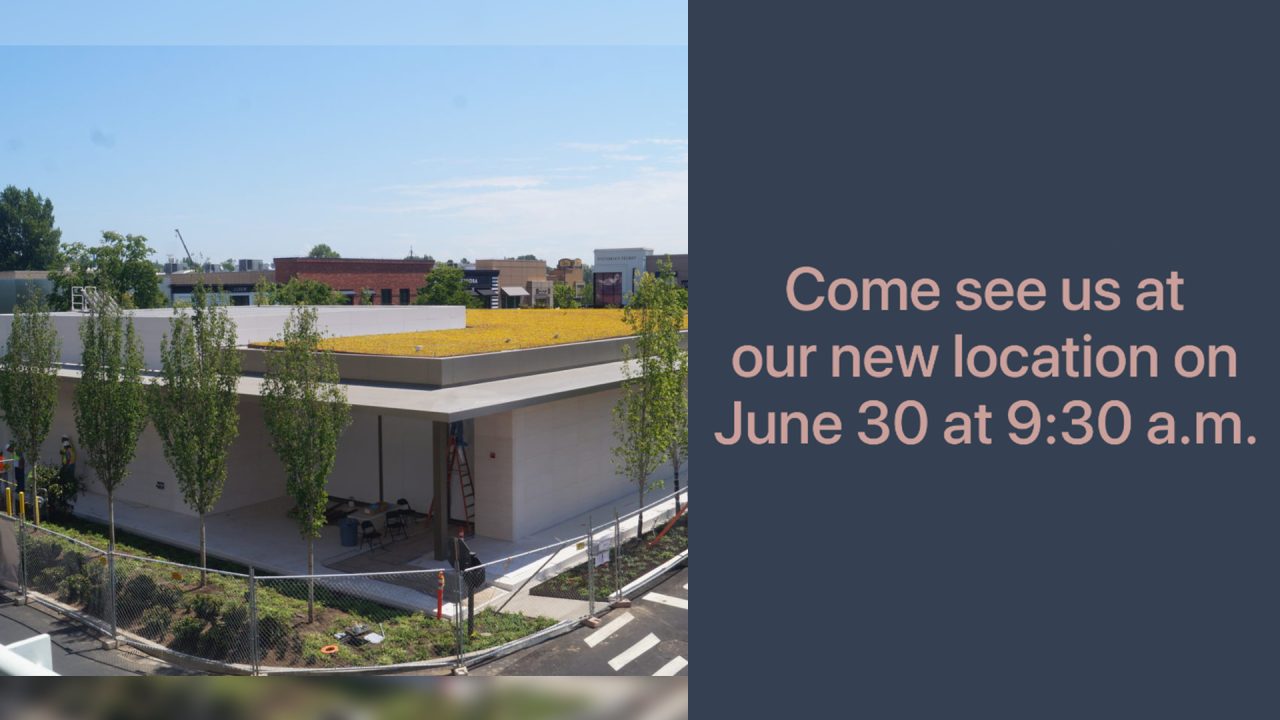 Apple has announced a new retail location in Seattle, Washington’s University Village, an upscale shopping center just north of the University of Washington. The new structure will replace a smaller Apple store located next door in the same plaza. According to Apple, a grand opening is set for 9:30 A.M. on June 30th.

With a slim, drawn-out roofline planked by natural wood and a glass entry anchored by smooth limestone walls, Seattle’s newest store bears little resemblance to the outgoing facade. Inside, brightly speckled terrazzo floors support a larger and more open retail area and a gathering space Apple calls The Forum, where educational sessions and performances are held in front of a large video wall. Natural light streams in through a skylight extending from the ceiling to the ground, where a miniature garden has been transplanted inside the store. Glass entryways open onto a sheltered plaza at the same level, blending the interior and exterior of the building as it connects to a landscaped green space and the rest of the shopping center.

Facing the new University Village store on the east and west sides are Apple’s existing location and a Microsoft store, respectively. The two competing storefronts once eyed each other like characters in a Wild West showdown from opposing sides of a parking lot dividing the plaza down the center. It was only when construction began that the sea of asphalt was parted and a temporary fence and steel framing broke the buildings’ gaze.

The people in the Apple Store deny all knowledge of what this new building is. It’s a new Apple Store. pic.twitter.com/B2dj4vLsMZ

As with many of the company’s recent and more significant retail stores, the new University Village location places emphasis on the idea of creating a modern town square, a gathering place for the community. One major aspect of this initiative is Today at Apple, a series of community-oriented daily sessions which inform the physical layout of all new Apple stores. We recently catalogued Today at Apple’s first year, and the directions Apple may take the programs in the future. 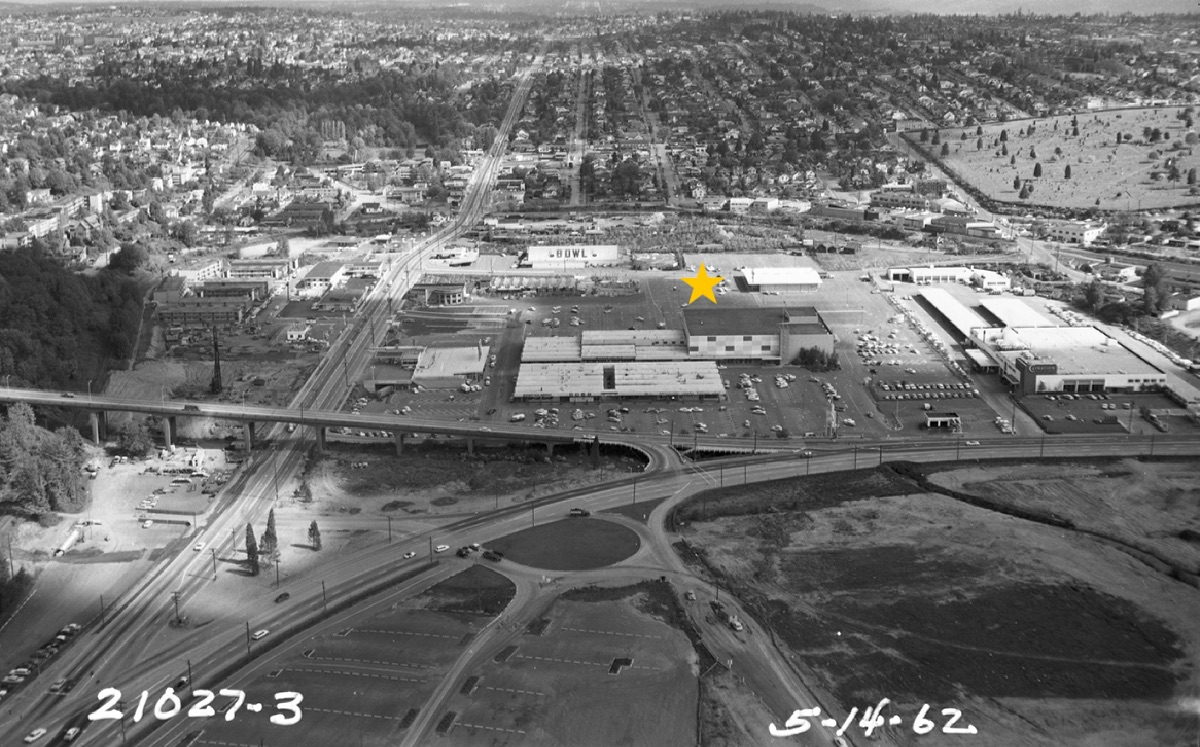 A 1962 aerial view of University Village shows how the site of Apple’s new store once appeared.

University Village presents a unique opportunity to recapture a strong sense of community, a challenge is Apple is poised to take on. Seattle first developed the shopping center in 1956 in response to post-war expansion around the city, a trend that spurred the development of many of America’s modern retail centers. Originally, the majority of the tenants in the district were local businesses and small chains. The familiar faces and community atmosphere gradually faded from the shopping center as it homogenized into a more typical outdoor mall. Apple’s retail popularity and gathering place strategy give the new store a shot at cultivating a renewed sense of community with a modern twist. 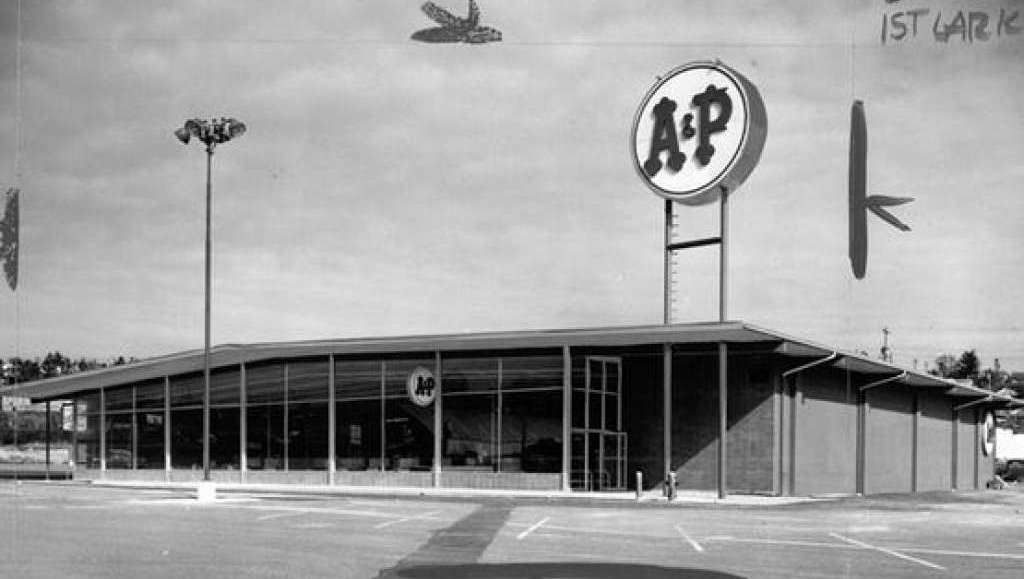 Apple first established a retail presence in University Village in September 2003, transforming a 1959 structure that originally housed an A&P supermarket. Upon opening, it was one of the first Apple stores with a tall, steel paneled facade, a design element that later became commonplace. In recent years, Apple has outgrown many older stores thanks to increased interest in Apple products and heightened support needs. Crowded tables and long repair queues have led to unpleasant experiences for some customers. Around Seattle, the issue was exacerbated this year when Apple’s Alderwood Mall store closed for a planned renovation. 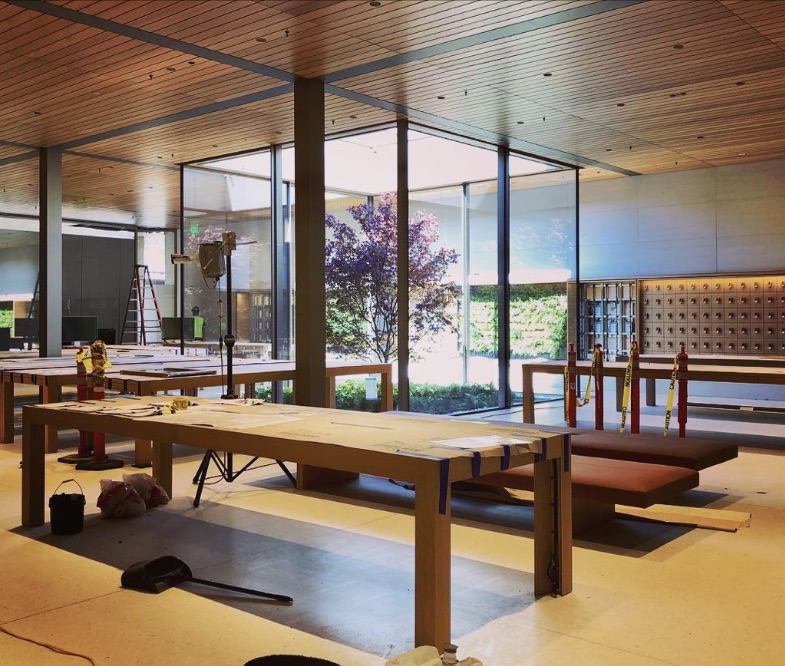 Details of University Village’s replacement were first reported last spring as construction work began. Most recently, we highlighted photos and videos that showed the Foster + Partners-designed building nearing completion. Over the past year, the existing store has been unaffected by construction. It will remain open until the evening before the new location’s grand opening. After Apple’s lease expires, the old store is expected to be remodeled for a new tenant with the addition of a second story.

Several other Apple retail projects will celebrate competition this weekend. On June 29th, Apple Cotai Central opens in Macau. Reopening on the 30th is Apple Palo Alto, which coincides with the permanent closure of Apple The Pier in Atlantic City, NJ.