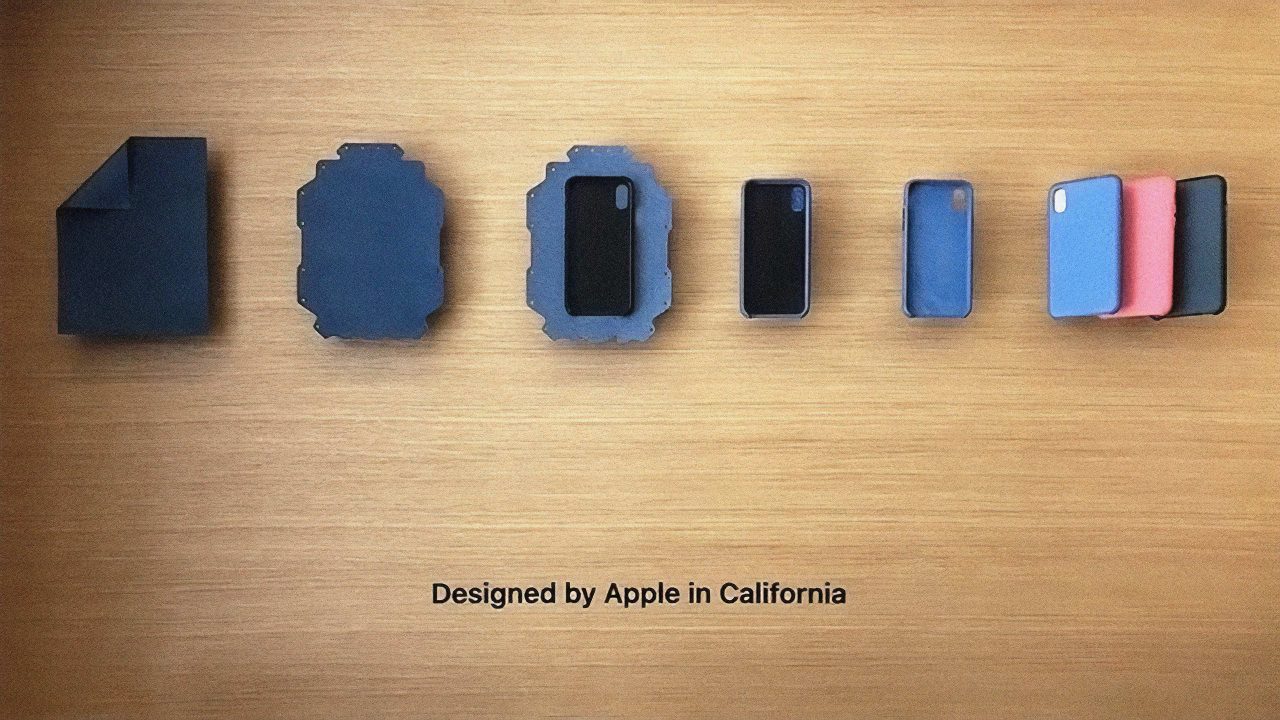 While standard Apple retail locations around the world have been receiving new graphic panels and 3D Feature Bays for the launch of the Apple Watch Series 4, iPhone XS, and upcoming iPhone XR, Apple Park Visitor Center is a wholly unique place. Coinciding with yesterday’s product launches, the store section of the space received some new and incredibly unique displays.

Out of ten Avenue windows outlining the store, eight are found at no other store in the world. Highlighting collections like Apple Watch Hermès and spotlighting Apple Park’s architecture, these Avenues offer visitors a special experience. For Fall 2018, four of the eight Avenue windows have been completely redesigned. Special thanks to Marília Guimarães who runs the YouTube channel EntendendoiPhone for graciously providing us with photos. 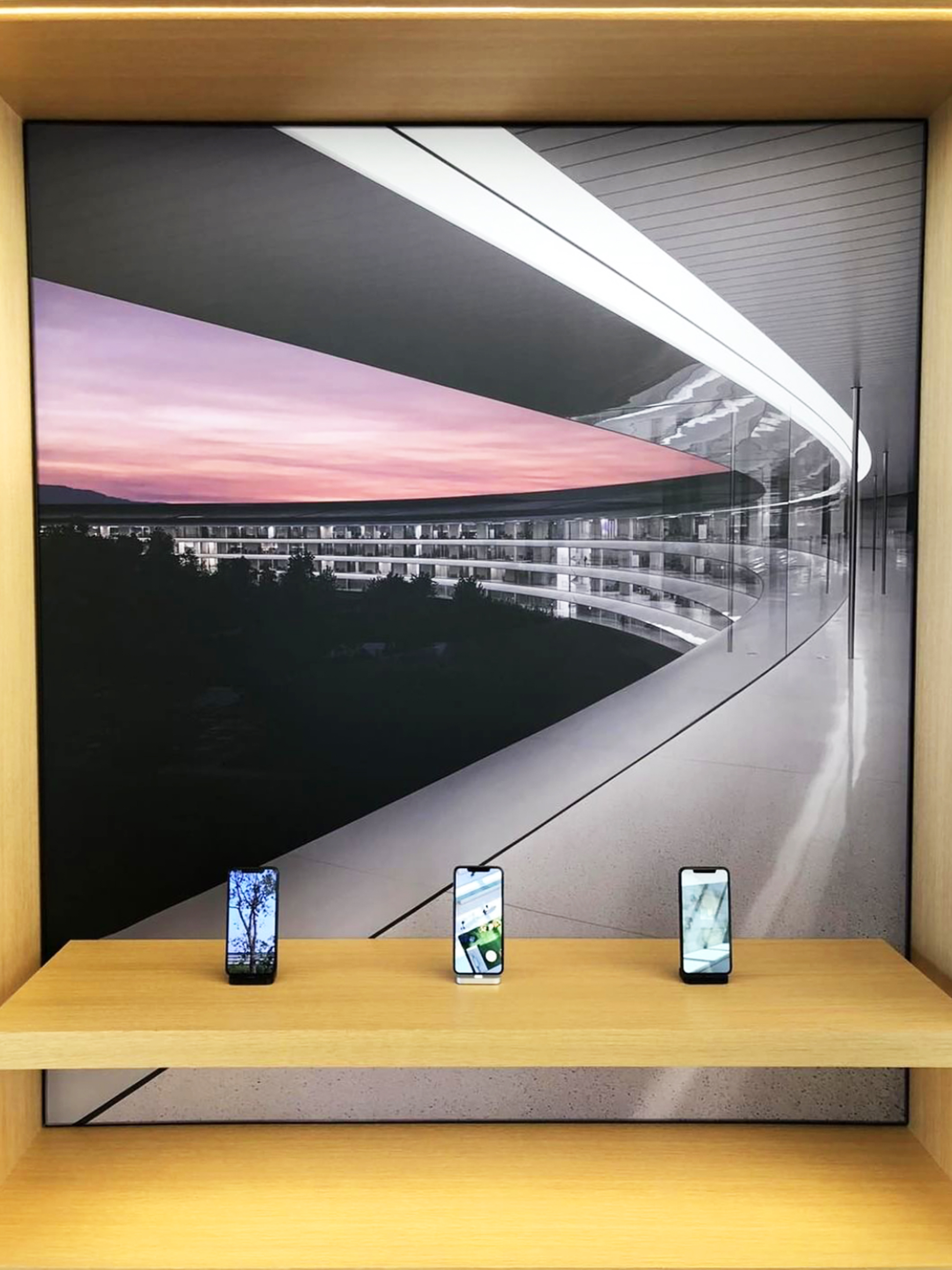 The first is the Apple Watch band collection, which now features a kaleidoscope of threads woven around a single Apple Watch and set against a black background. The display itself took hundreds of hours to design and the individual threads match the colors of Apple’s recent watch bands. Previously, this display featured three Apple Watches set against a white background with color-matched threads bursting out from behind each model. 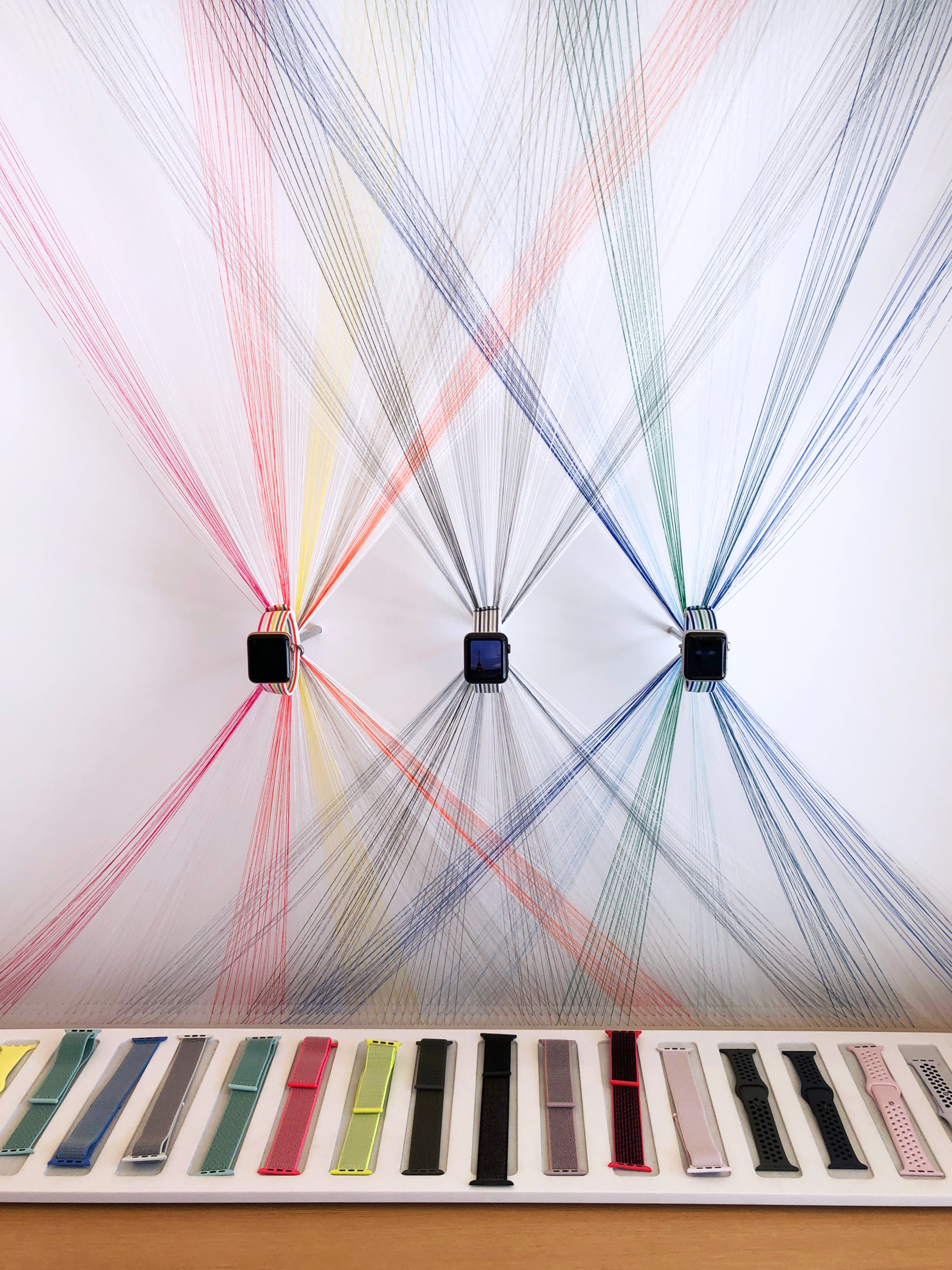 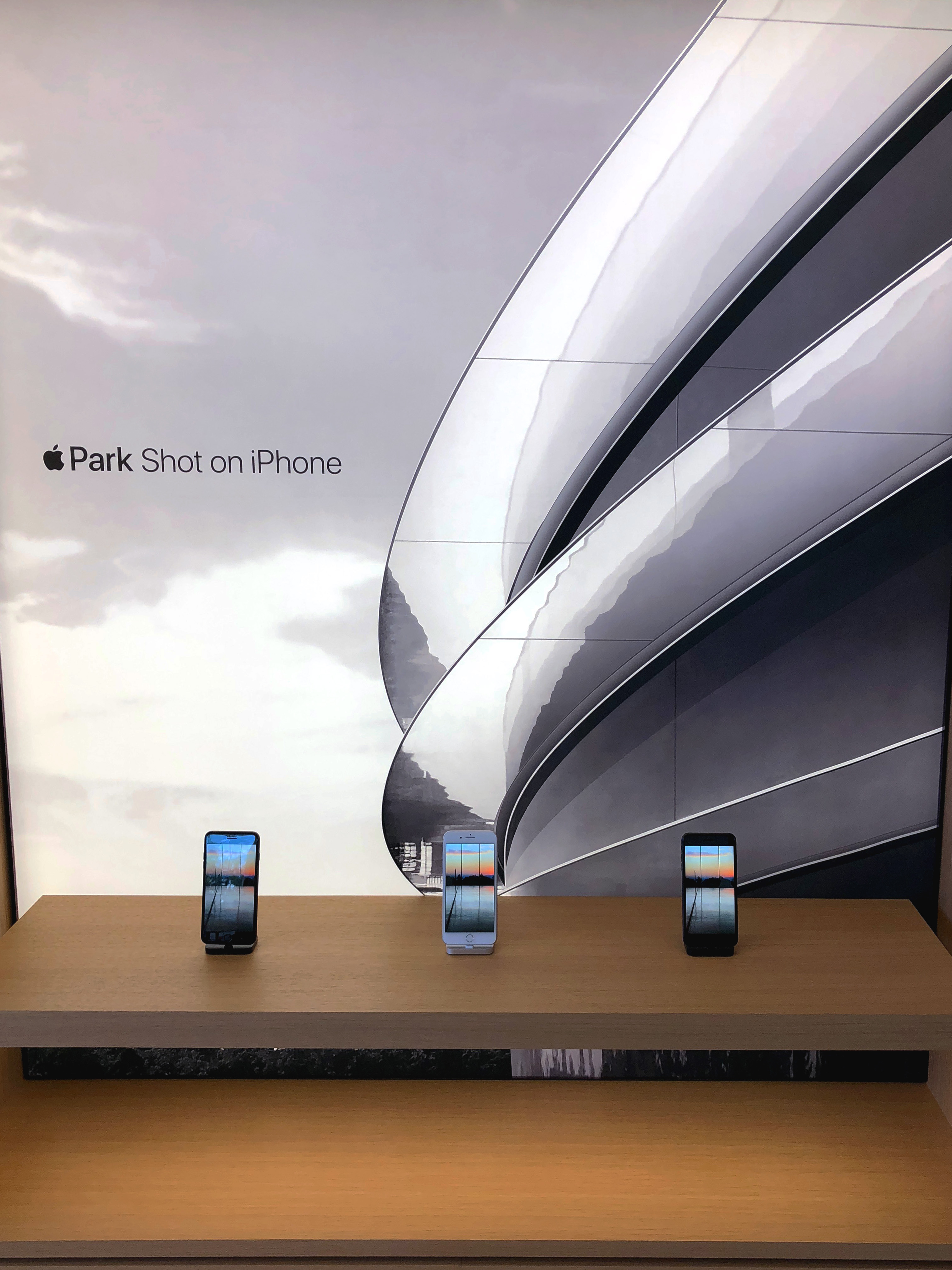 Next is Apple Park Shot on iPhone, a photography display showcasing the iPhone’s camera and Apple Park’s design. Demo phones loaded with photos of Apple Park have been refreshed along with the graphic panel behind the phones. When the original display was installed, the main campus was only partially complete and photo selection was limited. The new photo set offers a broader perspective. 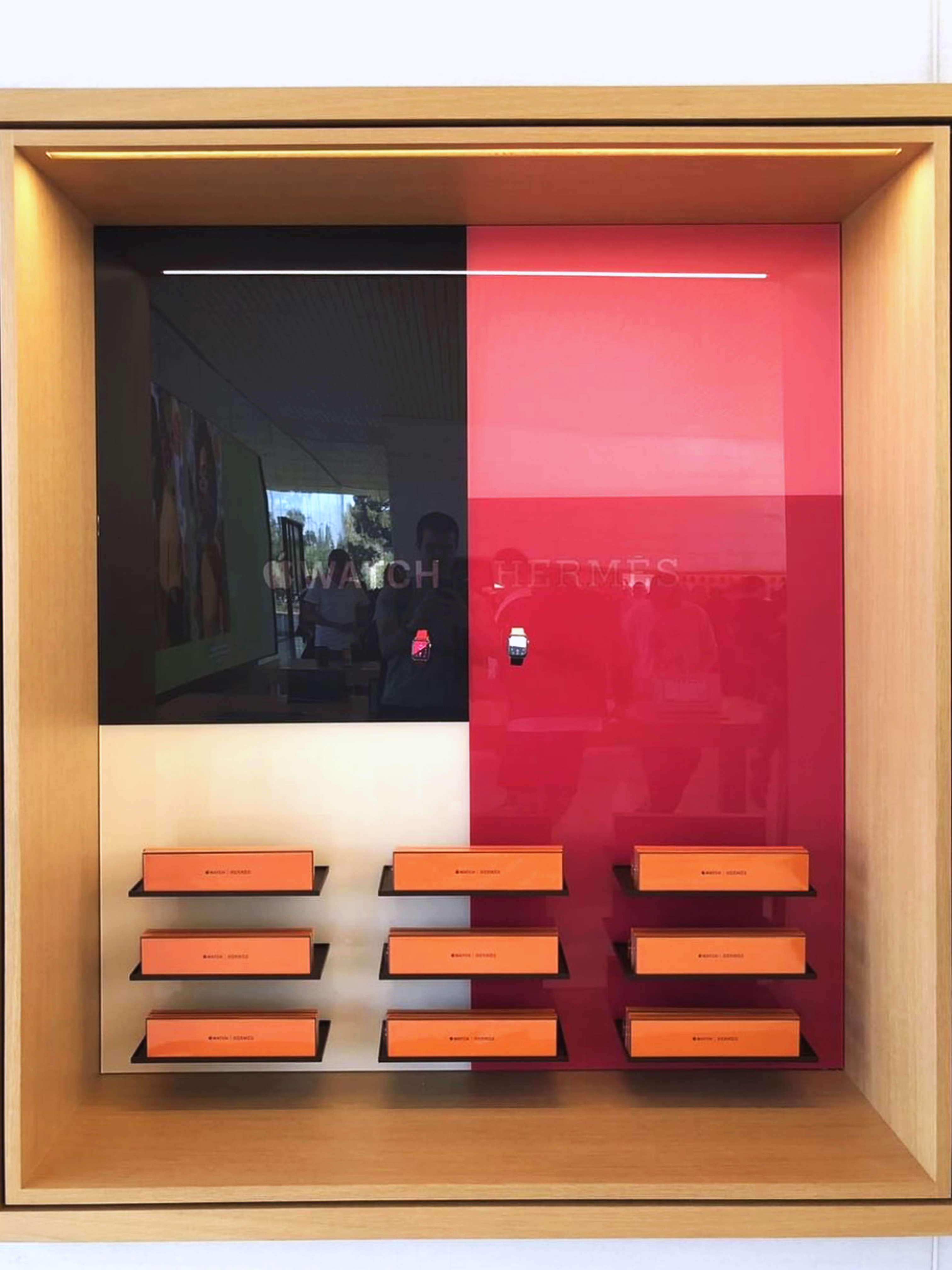 Apple Park Visitor Center offers perhaps the best selection of Hermès bands outside of a dedicated showroom. These bands were originally set against a hand-painted wood panel topped by five Apple Watches. The new window takes a dramatically different approach with a glass backdrop over bold color blocks. Text reading “WATCH HERMÈS” has been cut into the panel behind which blocks of color rotate to match the animation of the new exclusive Hermès faces on Apple Watch Series 4. A still photo cannot properly convey how mesmerizing the movement looks. 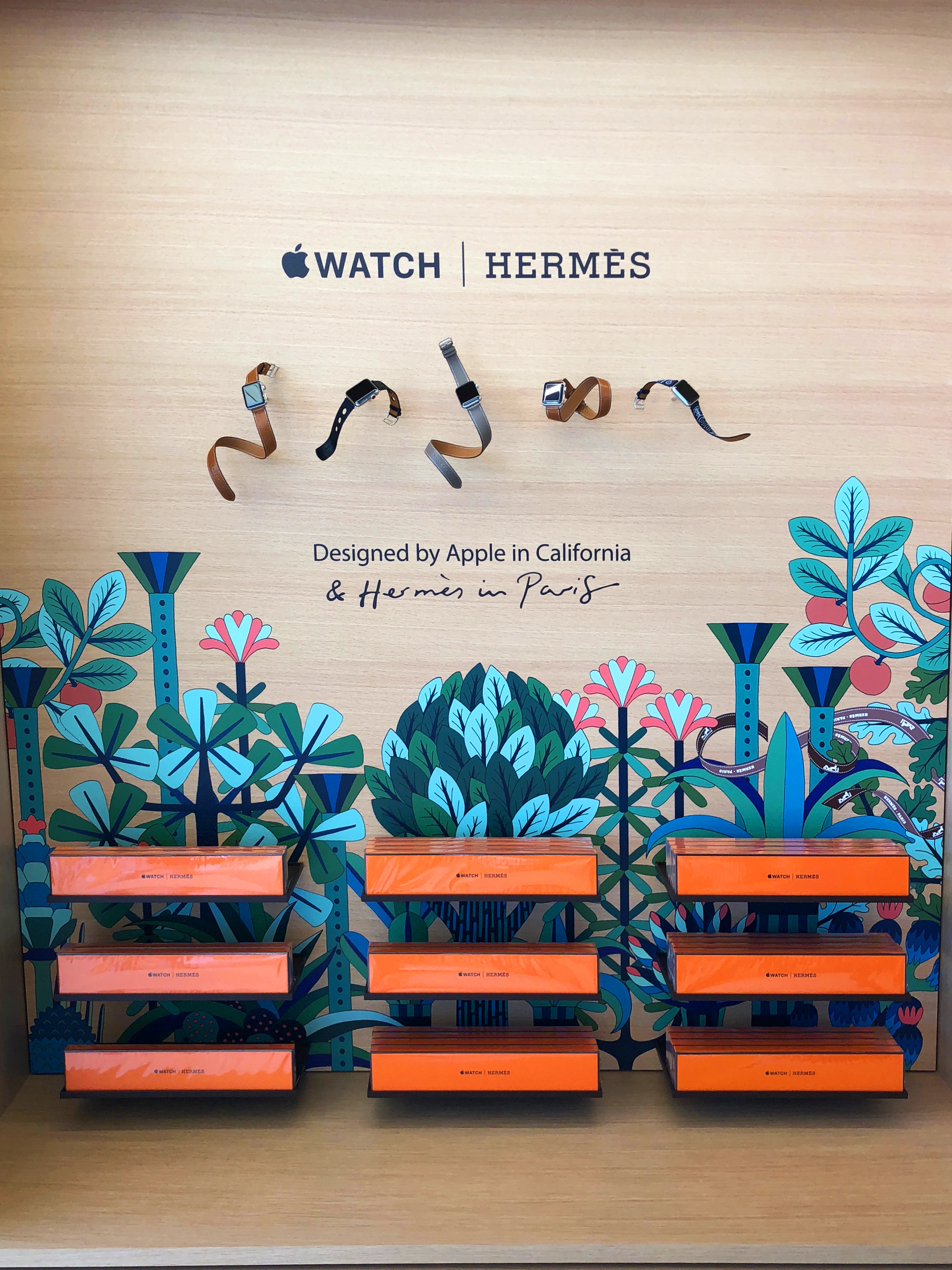 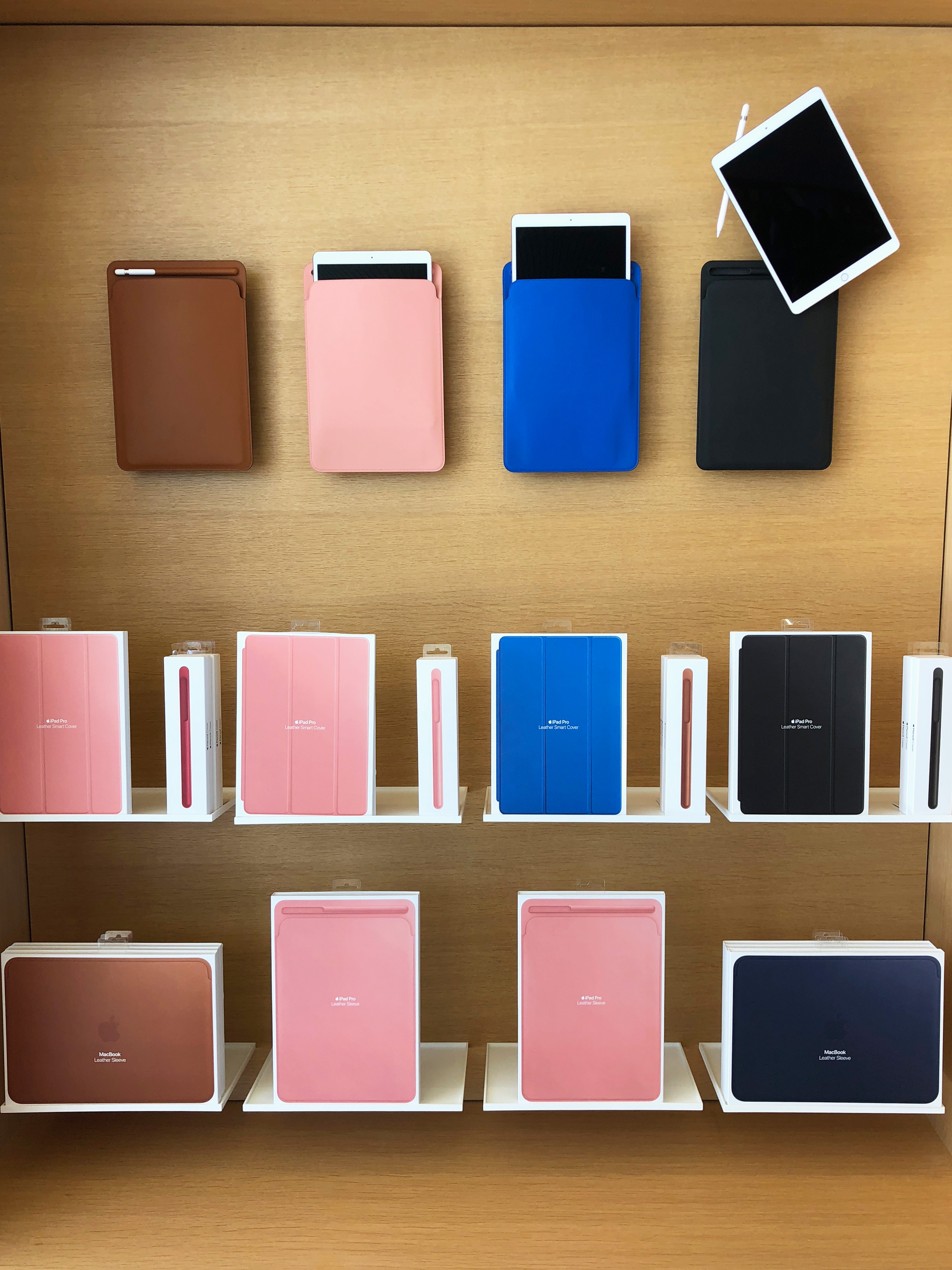 Finally, the case collection Avenue has been updated from displaying four iPads in leather sleeves to highlighting the manufacturing process of Apple’s leather iPhone cases. The display is reminiscent of a similar photo in the Designed by Apple in California book. Five cases in various stages of assembly show how Apple begins with a plain leather square and ends with a fully assembled iPhone case.

One display left unchanged since last year is an interactive iPad demo that allows you to sketch and color with an Apple Pencil and Morpholio Trace onto an outline of Apple Park. Perhaps this will be changed the next time iPads are refreshed? 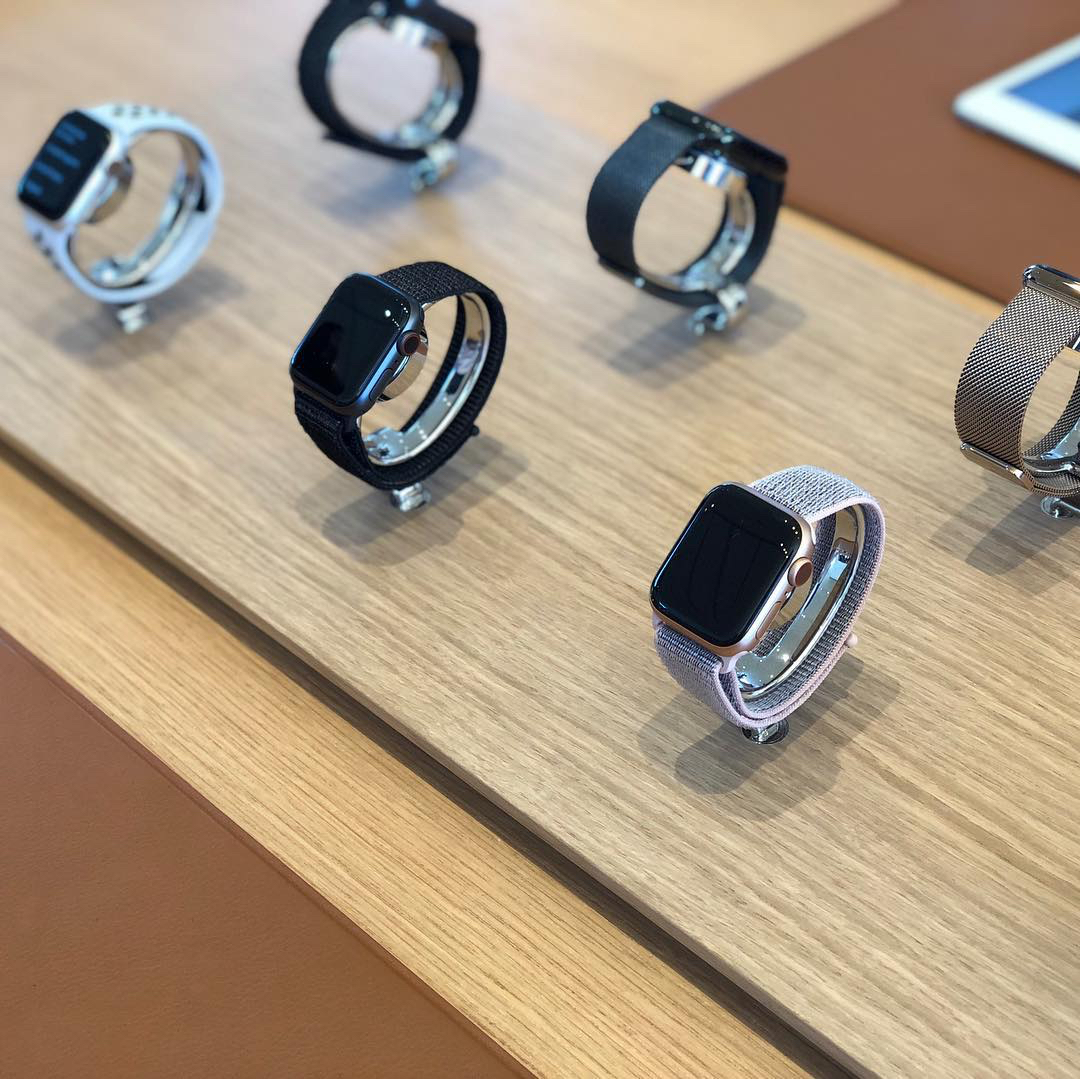 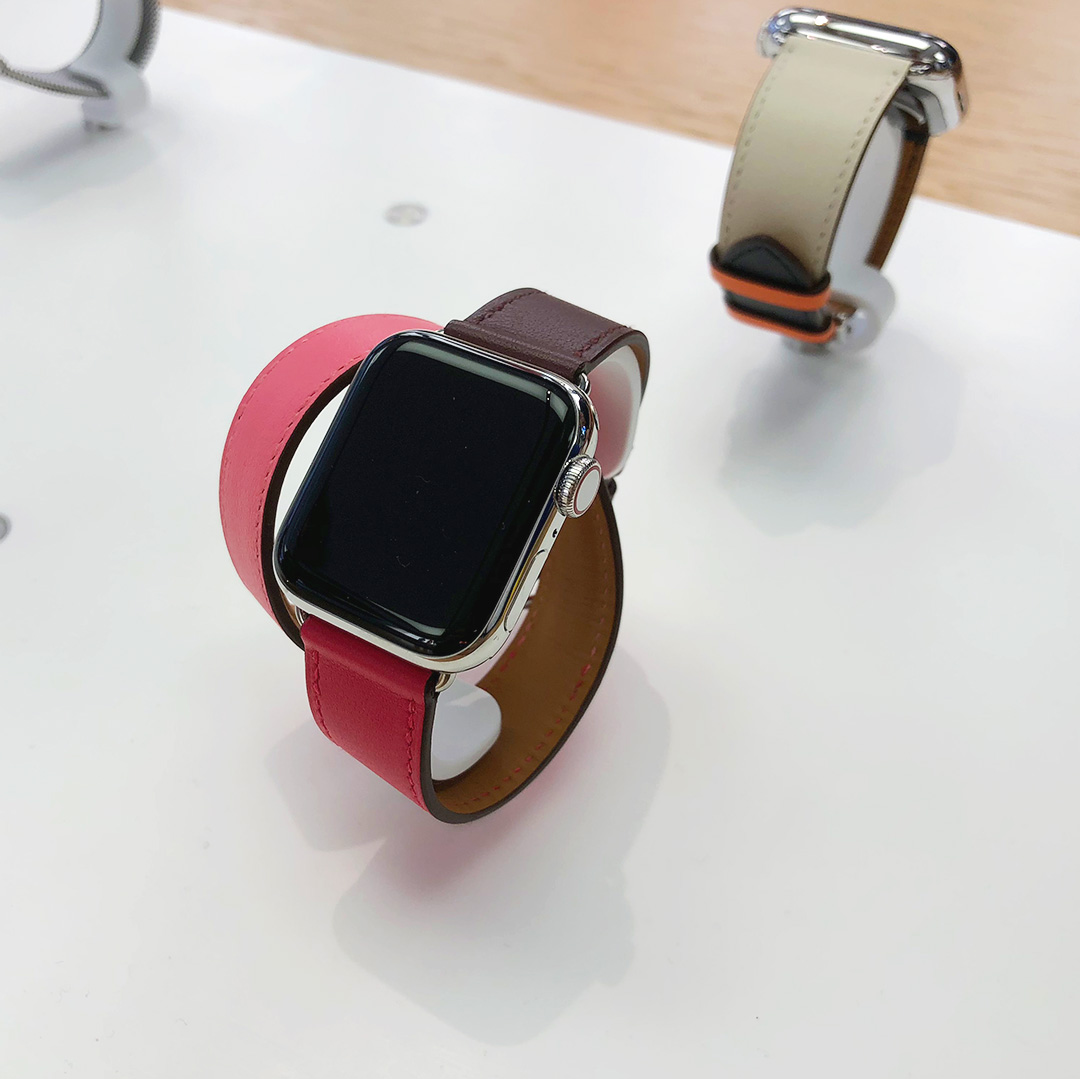 In addition to these four Avenue windows, new Apple Watch collection stands and band trays have been quietly introduced. While standard Apple stores have similar white plastic fixtures, these new fixtures are cut from the same wood as store tables. Matching grain direction helps the stands blend in with tables. Apple seems to test new retail designs at the Visitor Center, so these fixtures could potentially roll out to stores worldwide. 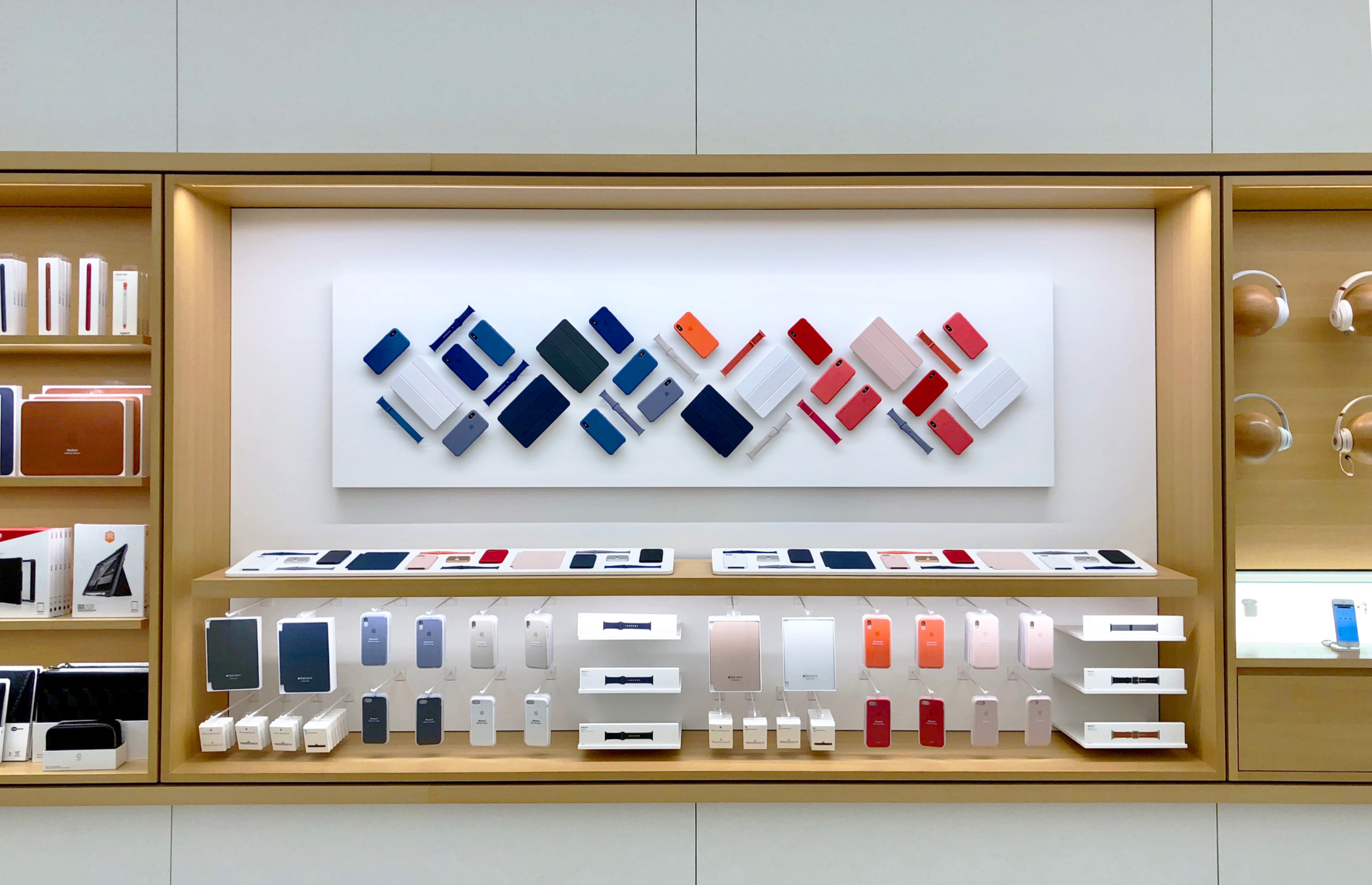 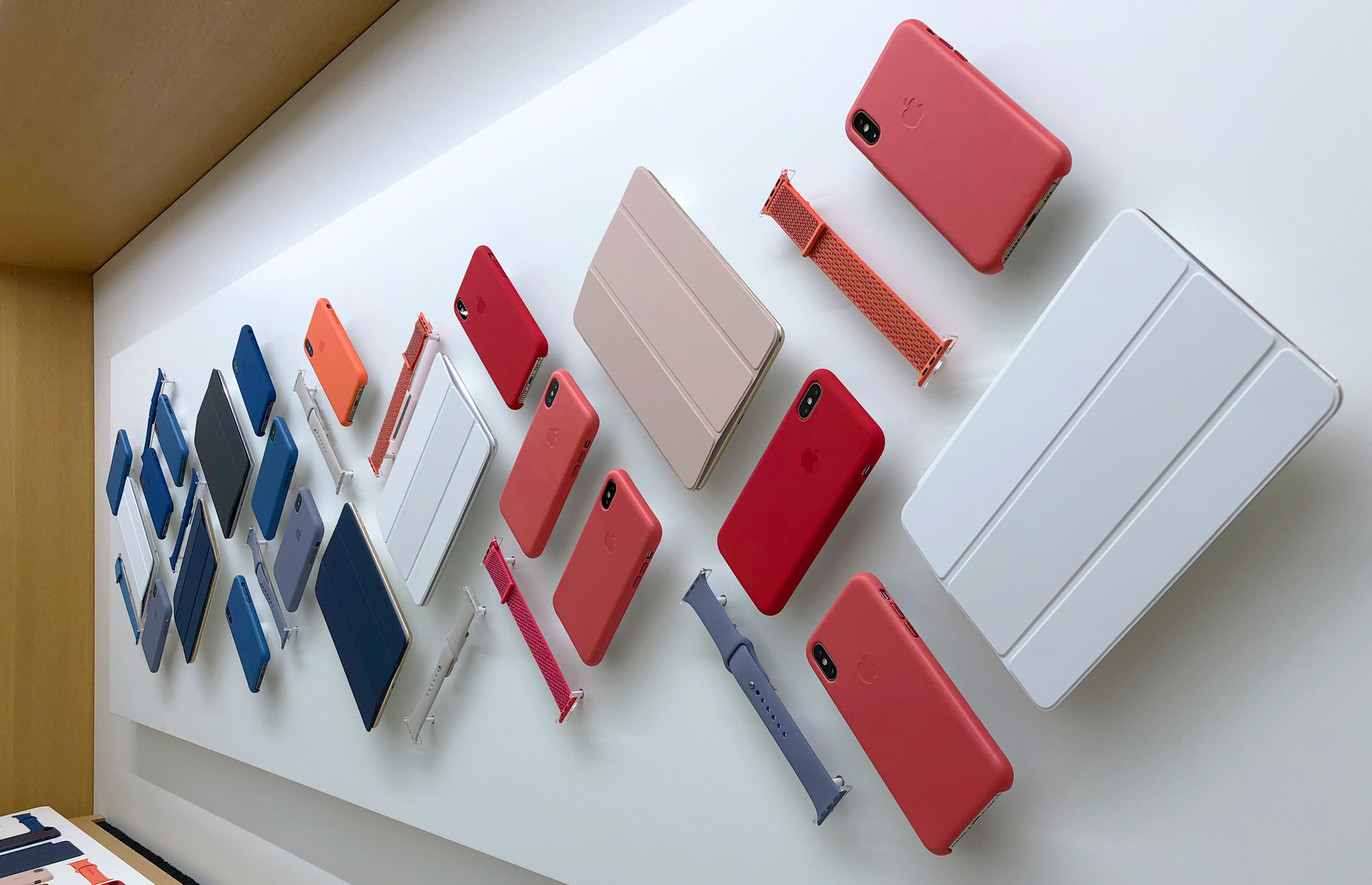 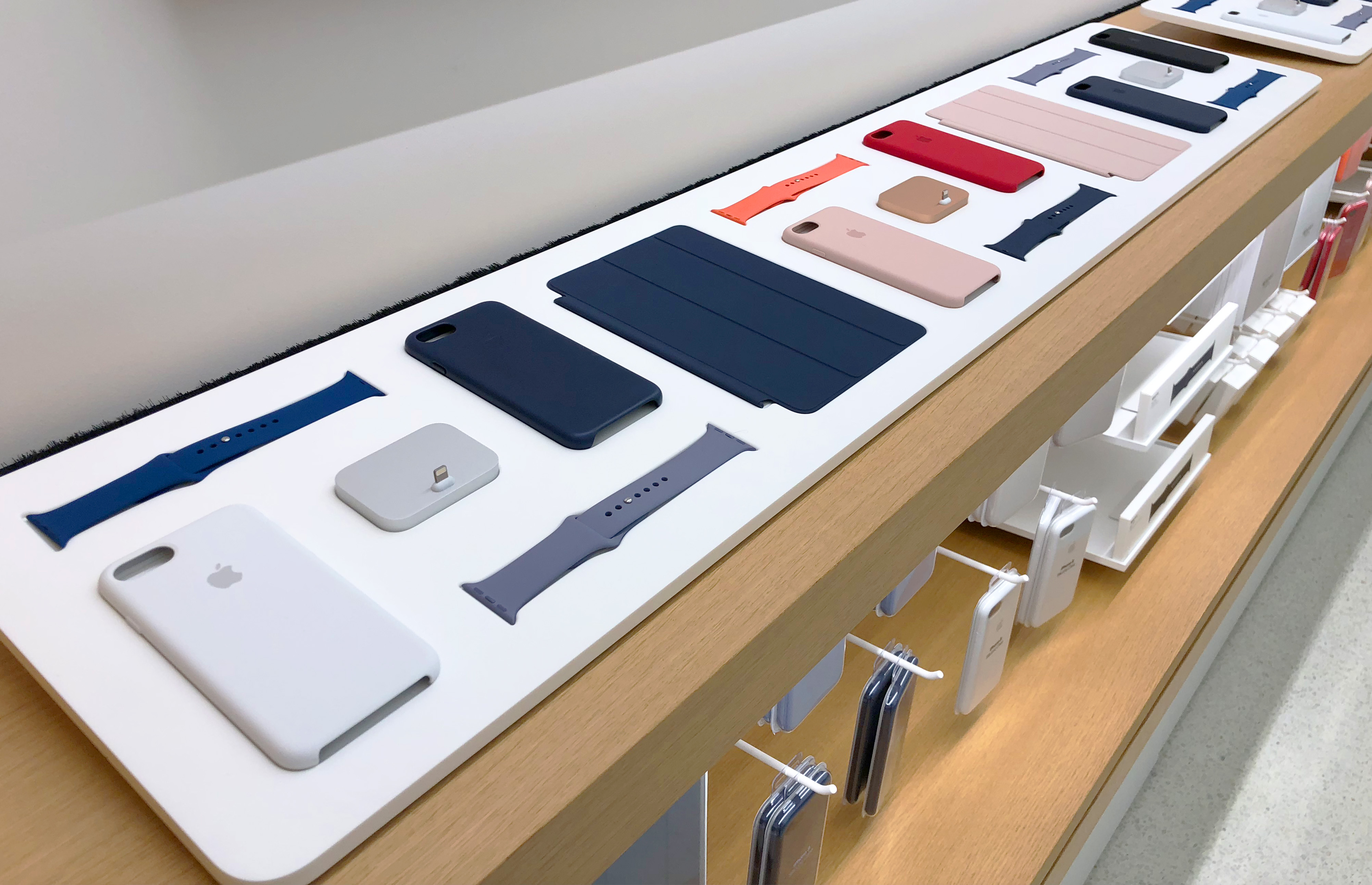 For those unable to make it to Apple Park, standard modern Apple stores introduced out a few new displays yesterday as well. New collection Avenues feature a refreshed selection of case colors for fall.

There’s a new demo loop running at stores themed like the graphics from the Apple store app during the keynote and preorders. It’s mesmerizing pic.twitter.com/TDkMJs7QDJ 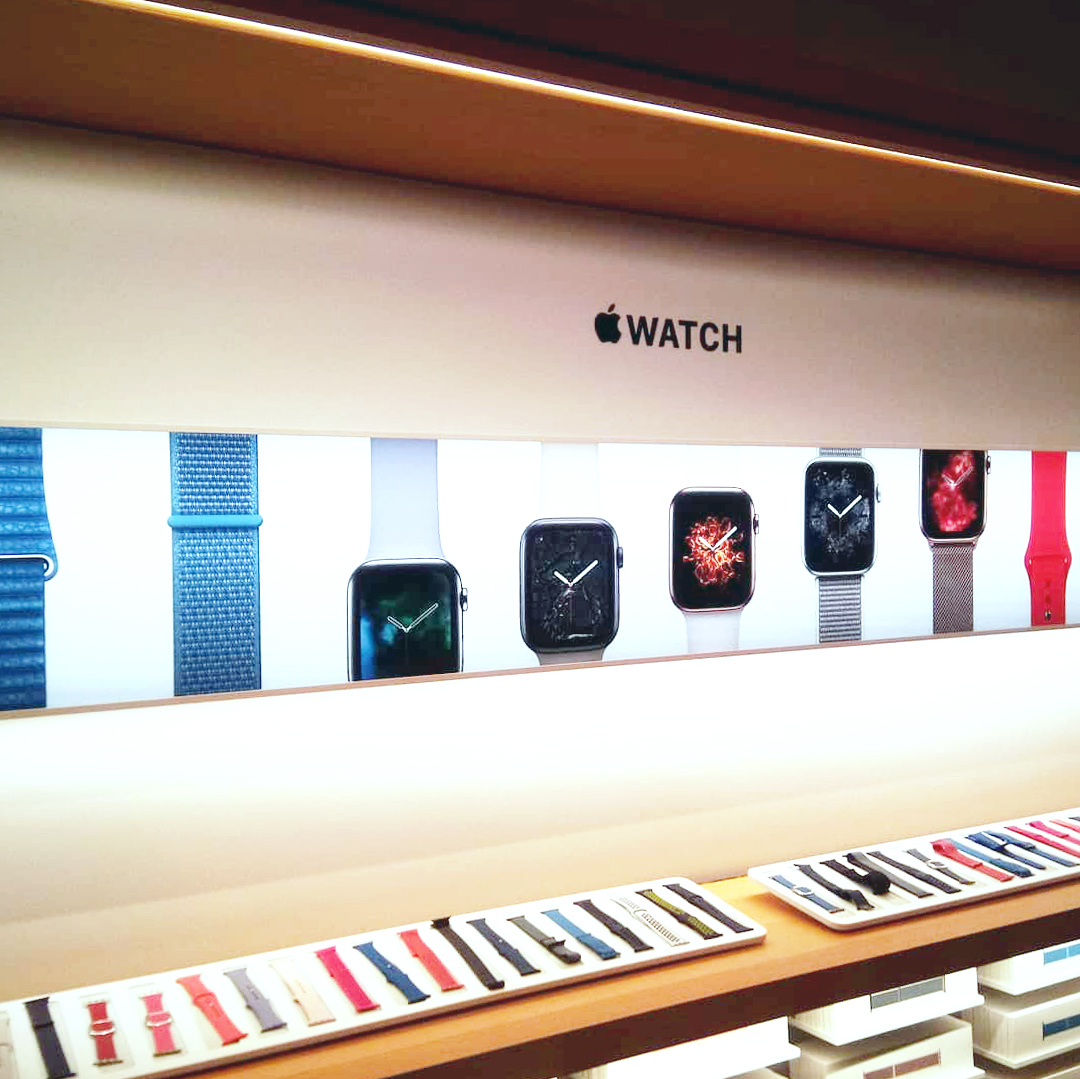 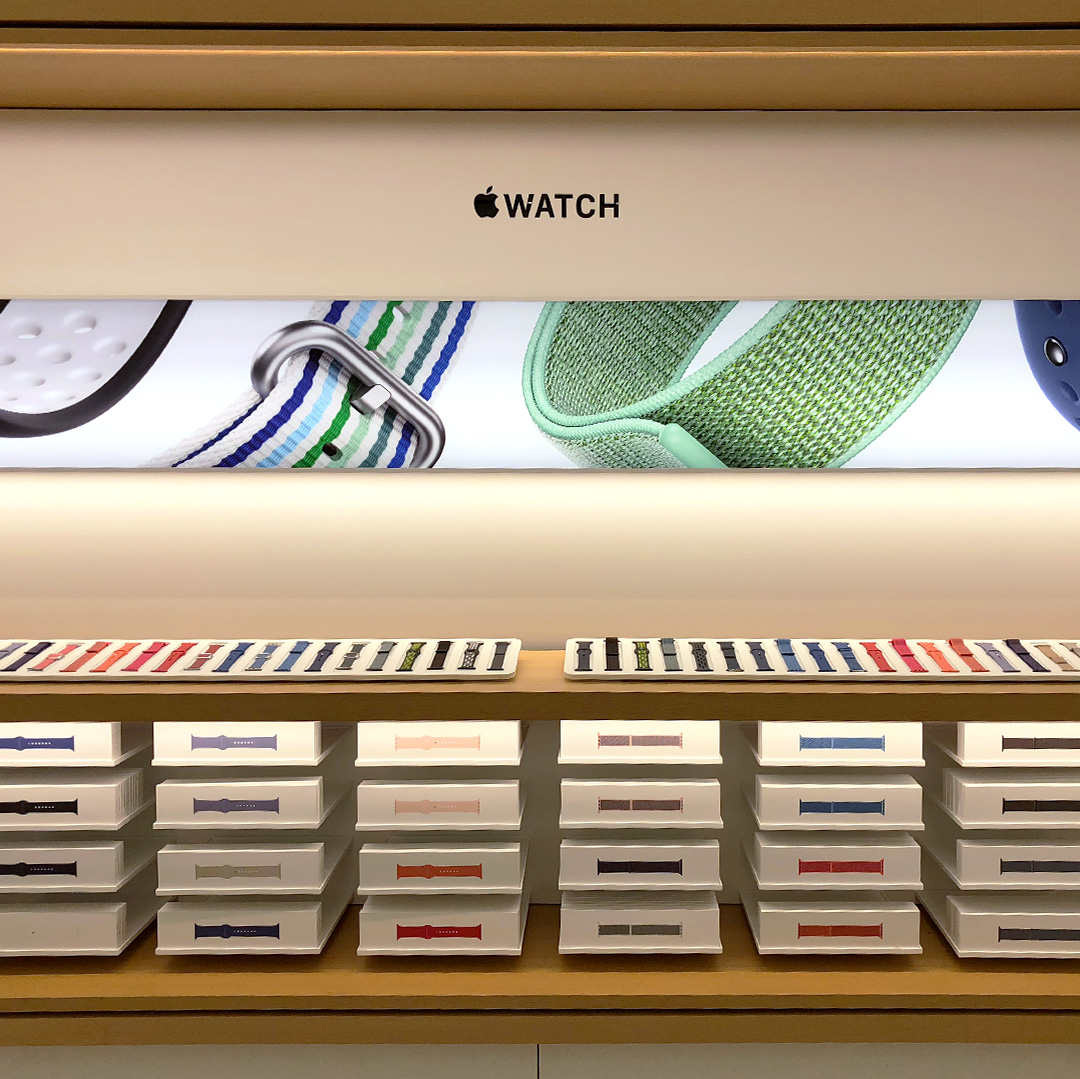 Which new display is your favorite? Let us known in the comments, and follow along with 9to5Mac’s comprehensive retail guide for more Apple store news.

I have a feeling this is probably your last chance to see the original set of 1 of a kind avenue displays at Apple Park Visitor Center. Several are product generation-dependent, and the merch debuted a year ago at the iPhone X keynote pic.twitter.com/UBsXZAZRyT