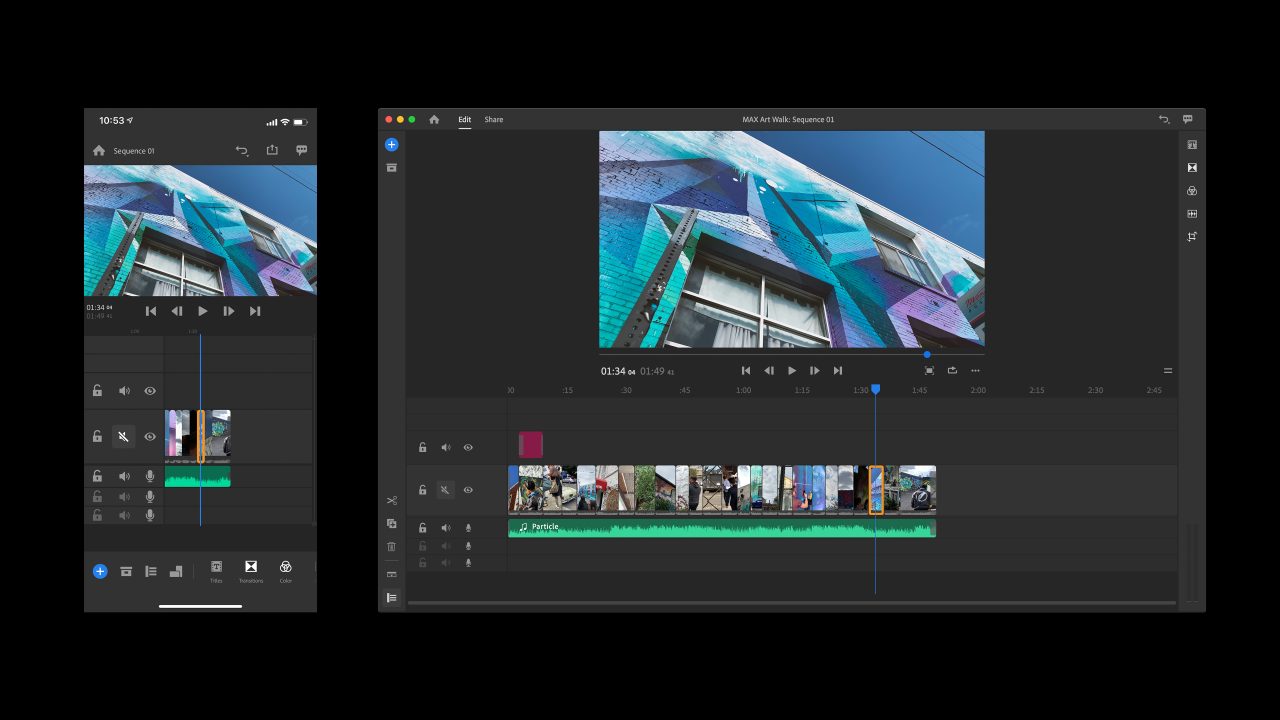 Premiere Rush CC is Adobe’s new quick and easy video editing solution for online content creators. The cross-device app debuted today after an early preview this past June. We’ve detailed the announcement in a separate post here, but I’ve had some hands-on time with the new software over the past several days to see how it performs.

To put Premiere Rush to the test, I attended an Art Walk at this year’s Adobe MAX conference held in conjunction with Adobe and Cartwheel Art of downtown Los Angeles. The city’s Arts District has become a vibrant hotspot for the creative community and is filled with immersive painted murals. It was the perfect place to get some great video clips and photos.

For my project, I attempted to realistically portray the time crunch many online video producers face on a daily basis. My clips were shot over roughly a 45 minute period, and the majority of the edit was completed during my bus ride back to the convention center from the art walk. Premiere Rush works almost identically on both my Mac and iPhone by syncing files and metadata with Creative Cloud, so I figured I could pick up where I left off later.

After shooting my clips, I reviewed them in the Photos app and favorited my best shots. Upon opening Premiere Rush, I was prompted to add media to my project, and selected everything in my favorites album. Tip: you can select items in any order you choose, and they will be added to your timeline in the same order. 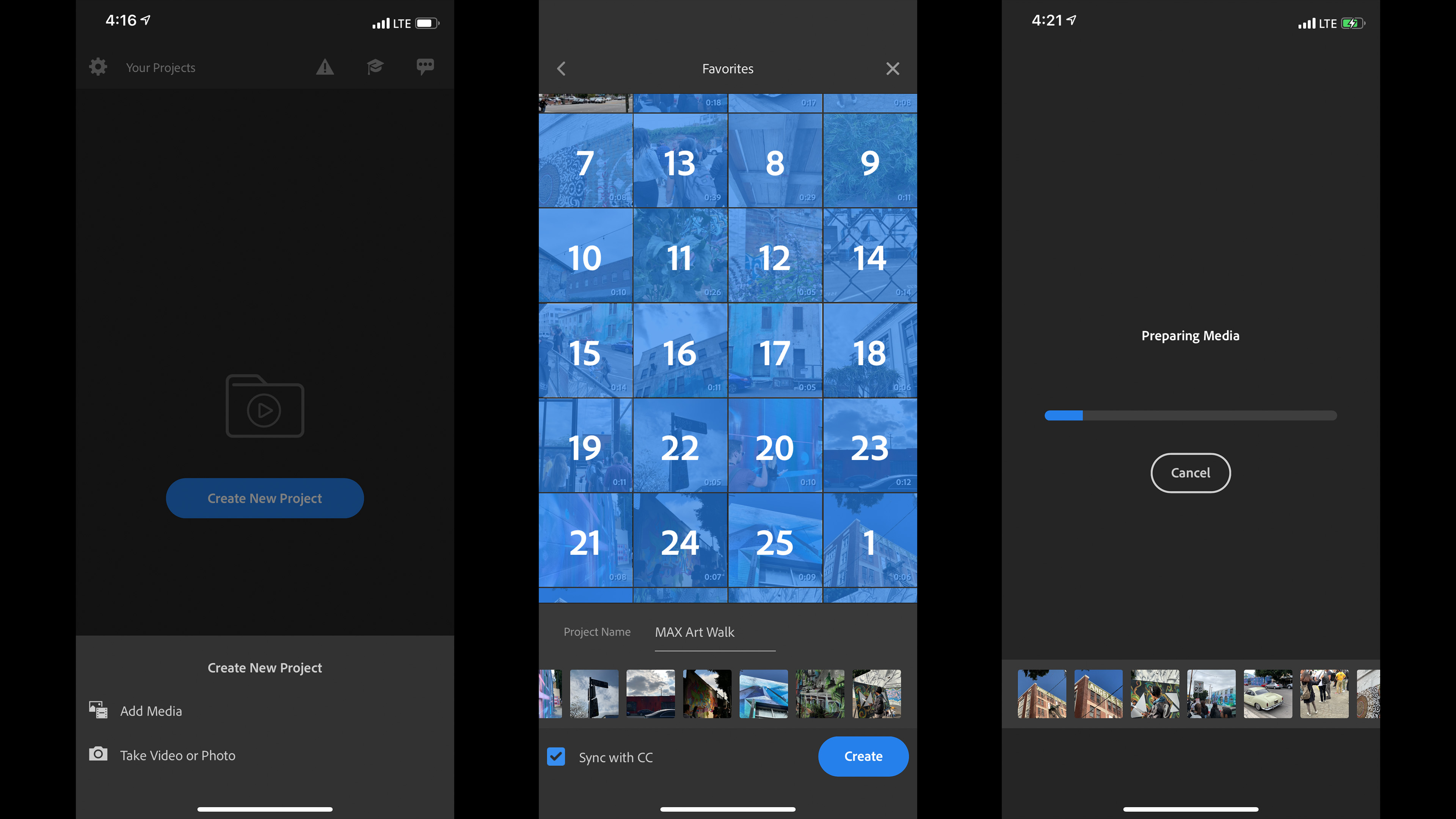 When your clips are finished importing, a fully-populated timeline will appear. Premiere Rush works primarily in portrait mode, so this is how you’ll edit your video. Landscape is supported, but mostly reserved for playback. Speaking of aspect ratios, the app lets you easily change between a portrait, landscape, or square project at any time. This makes creating multiple files for social media platforms easy. 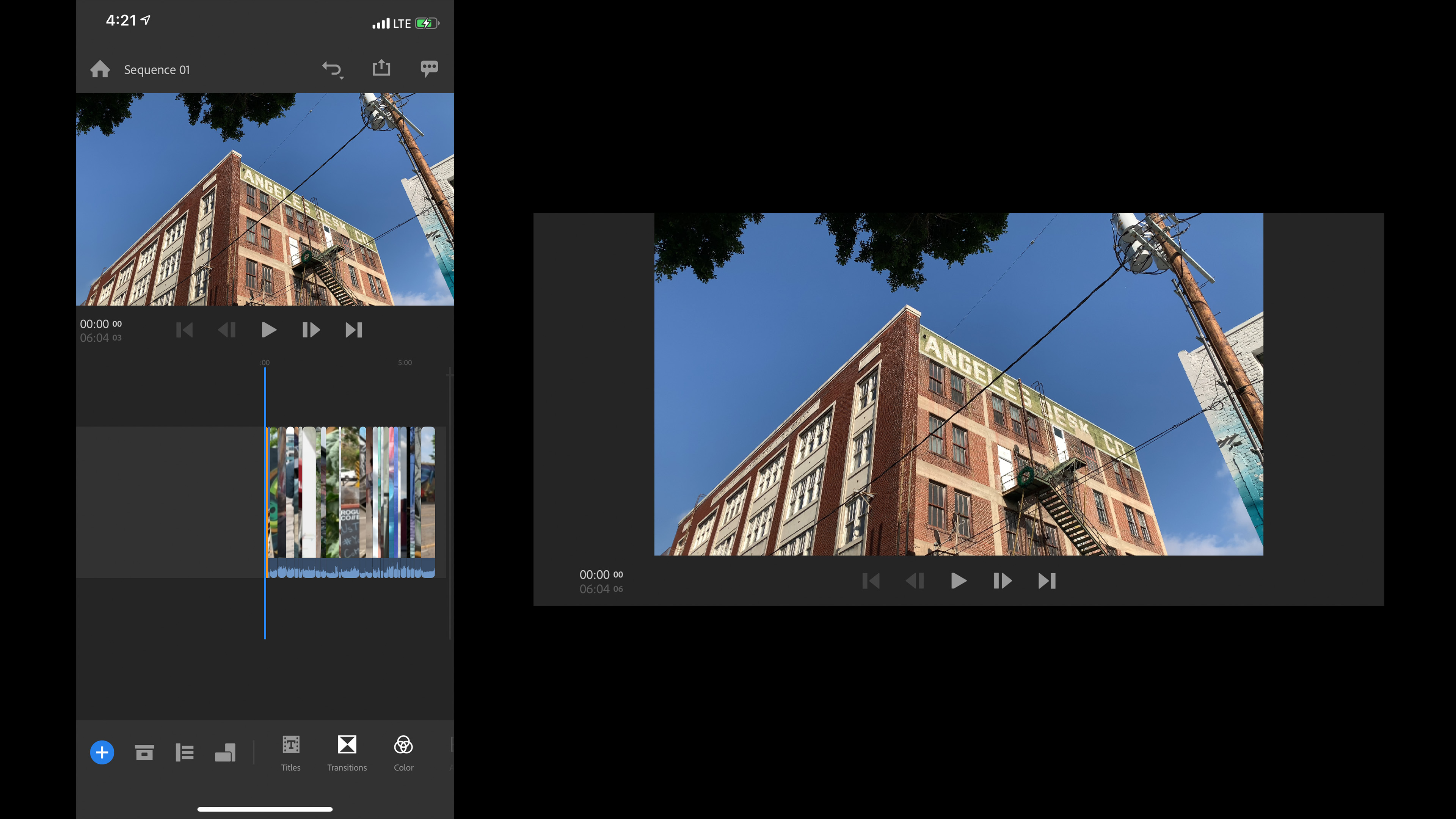 If you’ve used iMovie on an iPhone or iPad before, Premiere Rush on iOS won’t feel alien. It will, however, feel more powerful. Most of the tools from iMovie are present in Rush, and several more powerful features have made their way from the desktop. A scrolling toolbar at the bottom of the screen separates tools into categories. 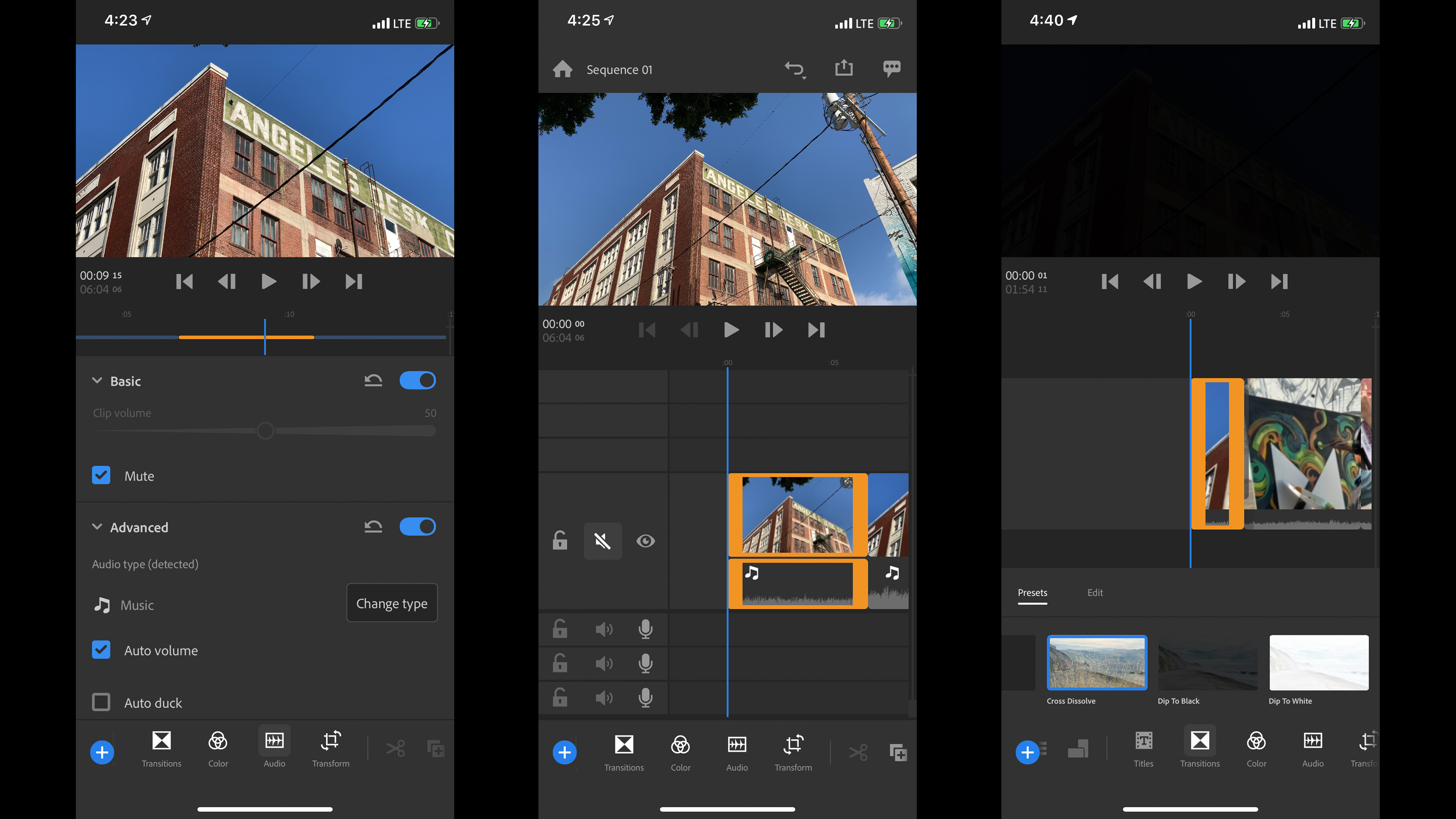 After cutting down the timeline by scrubbing through my video, splitting clips, and muting the audio, I went back through and added some finishing touches. Adobe’s stock transitions included with Rush are adequate for simple projects, but I’d prefer more flexibility than simply adjusting duration. Where the app really pulls ahead of iMovie is in color grading and clip reframing. Adobe offers several preset effects that you can apply to clips, and each of these presets can be completely customized to create your own looks. 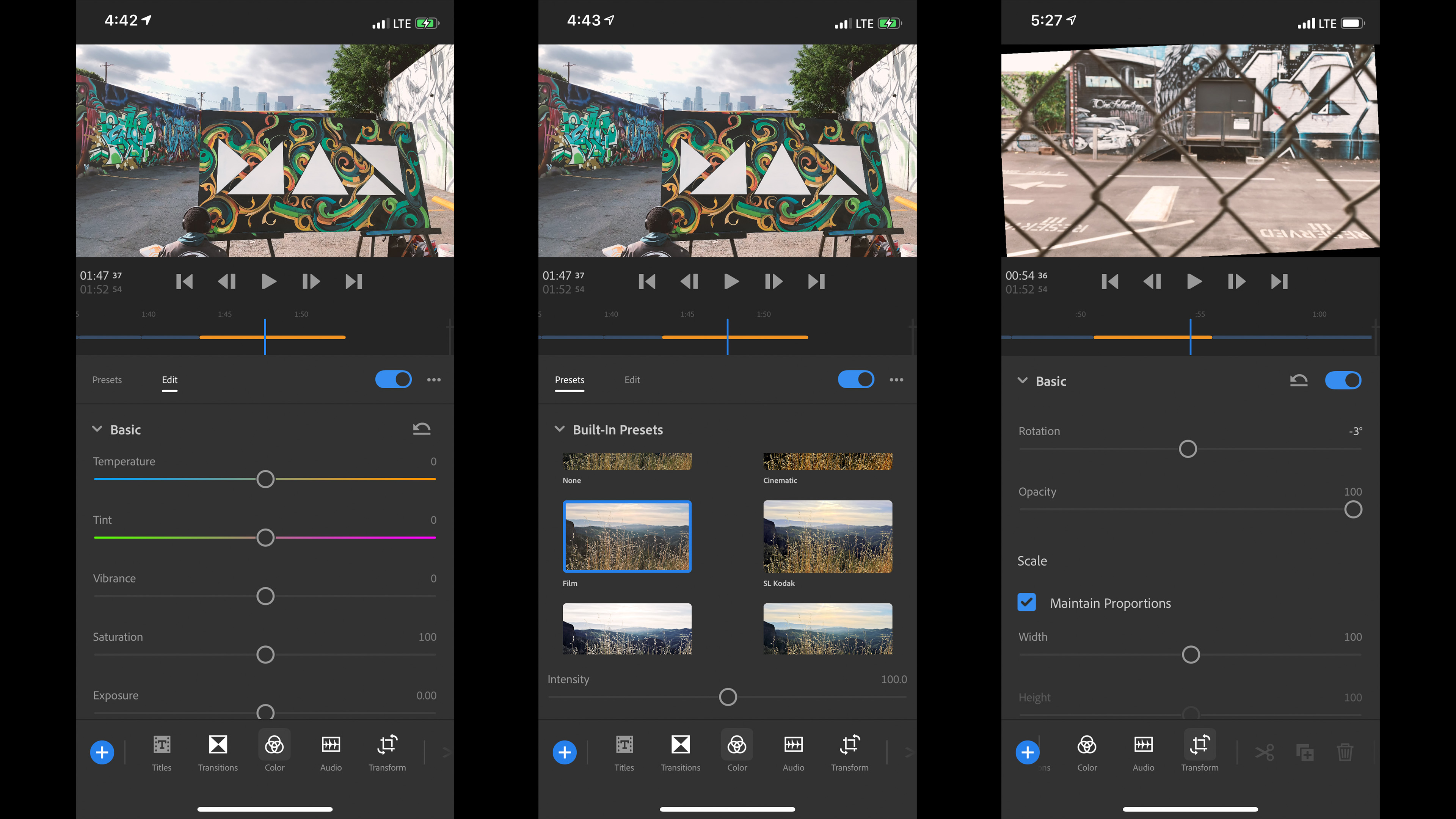 Similarly, clips can be scaled, straightened, and reframed freely on your canvas. These are fairly in-depth adjustments I wasn’t expecting to see in a mobile app. Unfortunately, clip retiming or reversing isn’t yet supported. Adobe has promised this will come in the future. Lastly, I added a title to my video and a soundtrack. The included title styles can be completely customized and repositioned just like video clips. This process is a little finicky on a phone, and better suited for the desktop version. 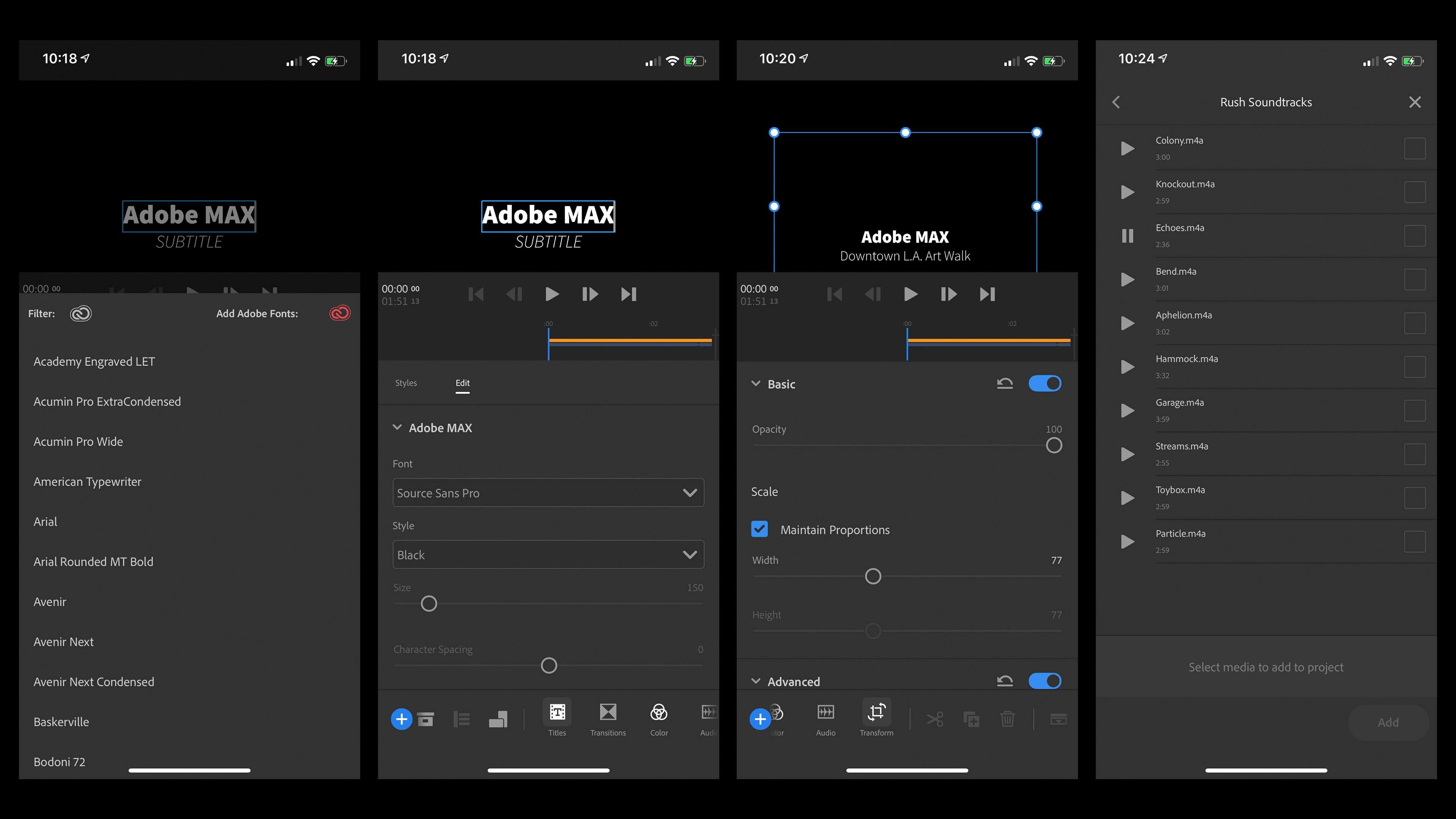 For audio, I chose one of Rush’s built-in soundtracks. There aren’t a lot to choose from yet, so I hope more will be added over time. You can also insert your audio files or record a voiceover. Rush can intelligently adjust clip volume when it detects someone is speaking. 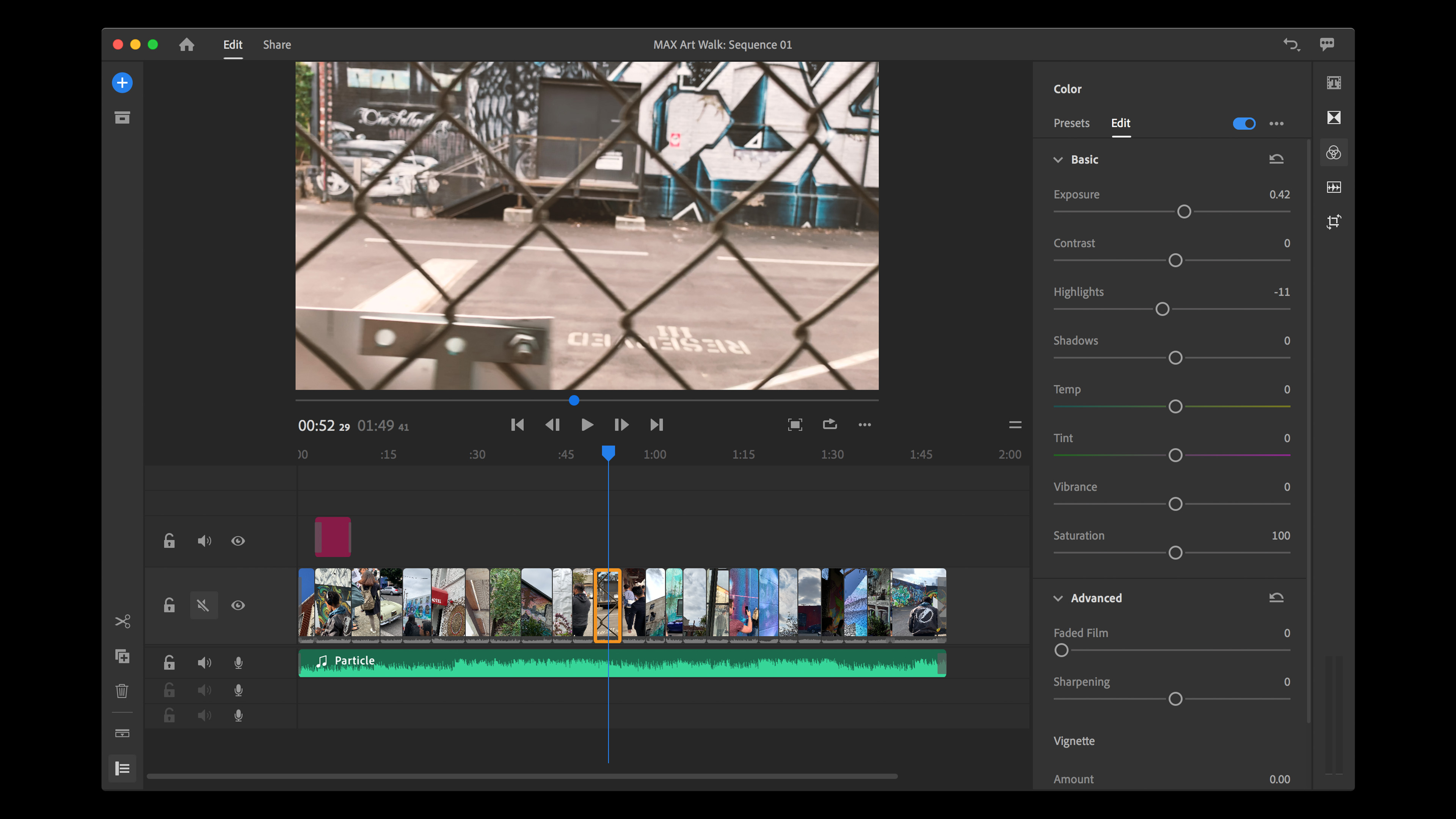 For a big screen preview and final tweaks, I opened Premiere Rush on my MacBook. Since I was relying on hotel WiFi, my clips hadn’t finished syncing with Creative Cloud yet. My timeline was preserved, but missing clips were replaced with red blocks just like in Premiere Pro. In fact, Rush on the desktop feels a lot more like Premiere Pro than it does iMovie. The features are obviously limited, but the workflow is familiar. 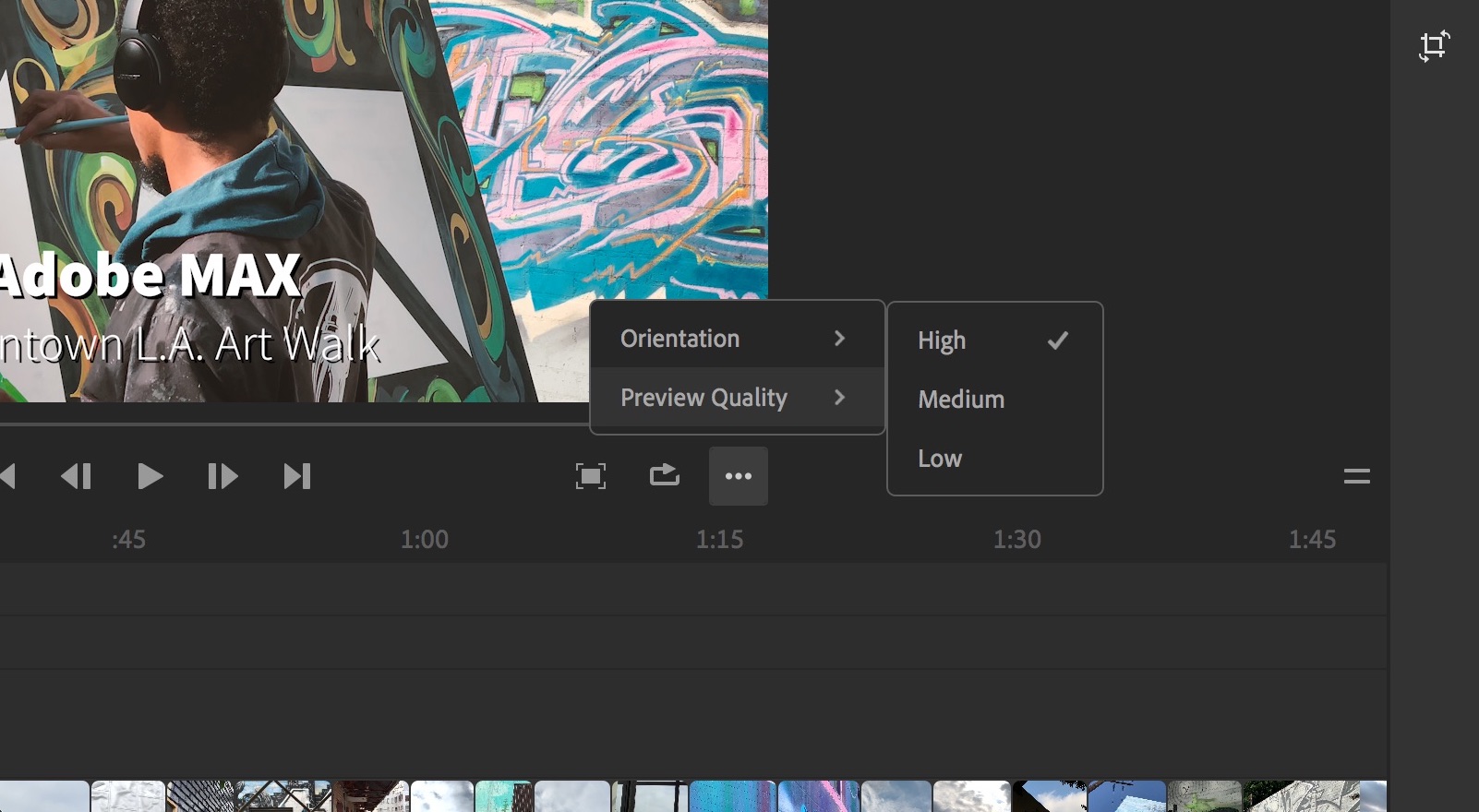 Previewing 4K video on my entry-level MacBook was a challenge. Frames were dropped during playback, even when I set the preview quality to its lowest setting. I don’t run into this issue as often in iMovie. My iPhone XS Max held up better, but still struggled after clips had effects applied. I didn’t find an option to change preview quality on iOS. There were a few app crashes on my iPhone as well. I never lost any data, but it did slow me down. Some of this can probably be attributed to the fact that I was using pre-release versions of the software. Adobe says it is working on performance improvements. 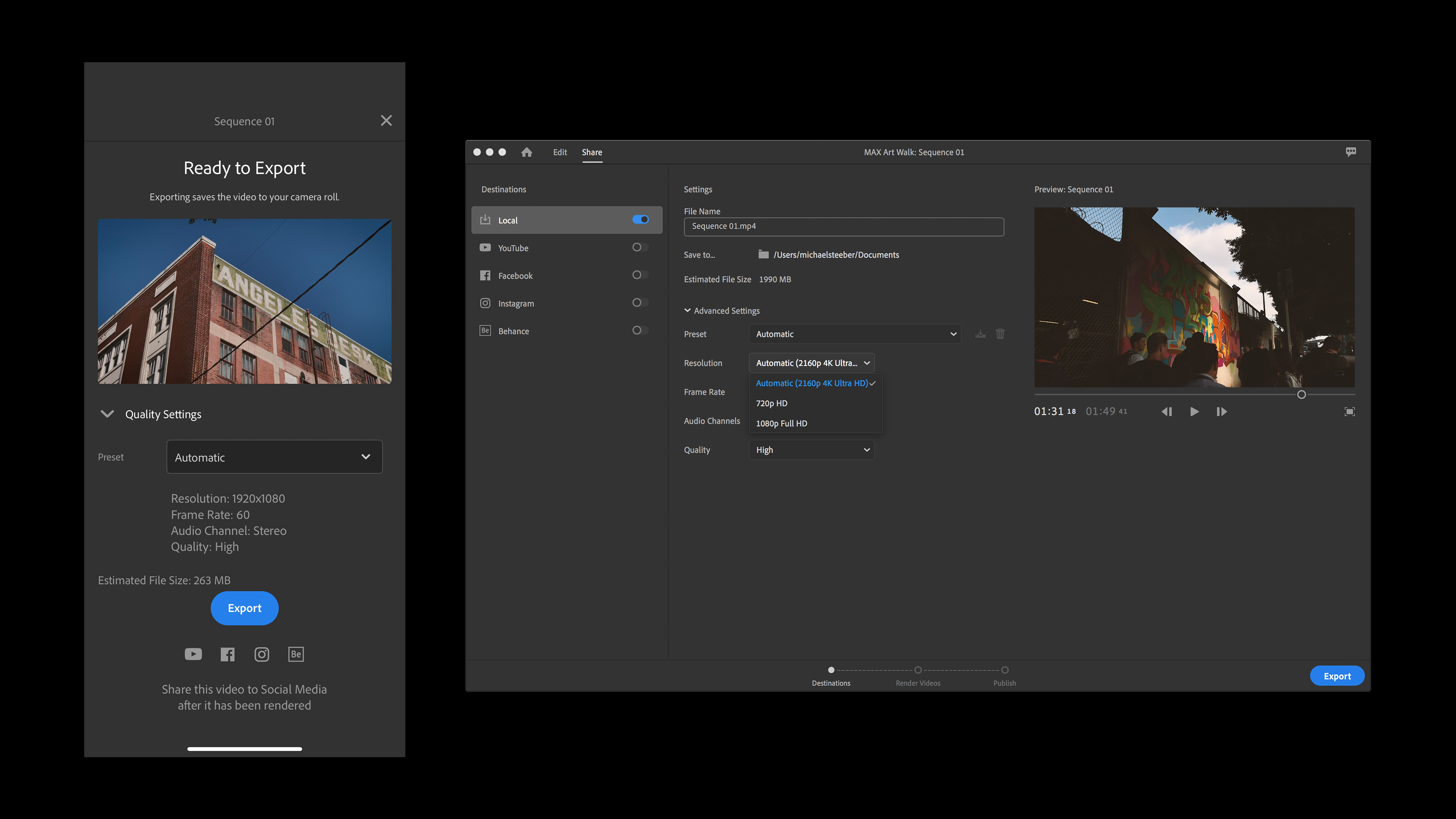 After you finish your video, switching to the share tab reveals all of your exporting options. You can quickly publish your project to social media here, but I just wanted to export the file. Interestingly enough, while 4K was listed as an option on my MacBook, 1080p was the maximum resolution available on my iPhone. You’ll want to keep this in mind if you export locally, but I’m willing to bet most people will publish directly to YouTube or Instagram.