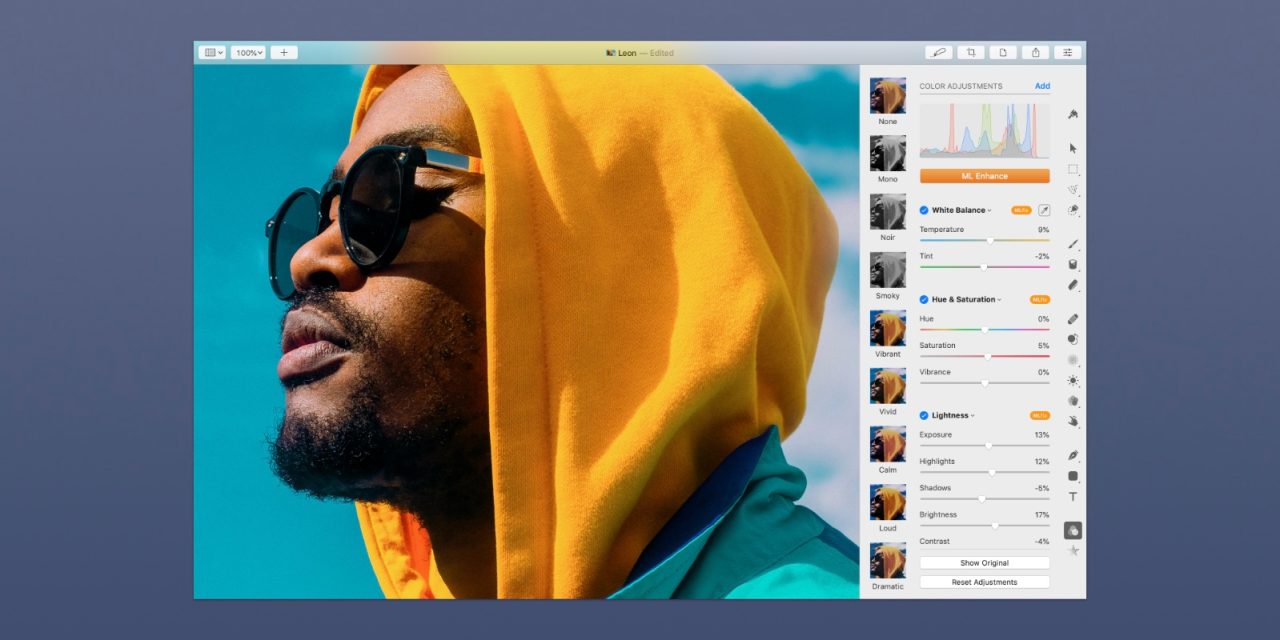 Pixelmator Pro for Mac is today releasing a pretty substantial update to its image editing app. The new version adds a brand new light theme, and a revised dark theme, to align with macOS Mojave’s Light and Dark modes.

Pixelmator Pro, and Pixelmator before that, has always featured dark chrome and palettes.

Pixlemator Pro 1.2 updates the dark theme to more closely match the new system dark theme in Mojave, with support for all the new accent colors. The team has also added an entirely new light appearance, if you’d rather have Pixelmator fit in alongside your other Mac apps.

You can explicitly choose a light or dark theme, or enable automatic mode switching to have Pixelmator follow the look chosen in macOS System Preferences.

I personally find the new light theme hard to parse in Pixelmator Pro’s single-window UI. I find it hard to separate the logical panels; everything washes into everything else. Hence, I am really happy that I can set Pixelmator Pro to use its dark theme despite having my general Mac system appearance as light mode.

In addition to appearance, the new update also lets you specify a custom window background, if you’d rather start with a canvas that is more high-contrast.

ML Enhance is a one-click way to automatically apply a variety of color adjustments. Using machine a learning model, Pixelmator Pro can make many photos look better simply by clicking a single button in the Color Adjustments panel. It applies exposure, contrast, white balance and similar adjustments all in one go. You can manually tweak its automatic adjustments afterwards. I think it’s a weird marketing choice to brand the feature as ‘ML Enhance’, with the toggle buttons in the app interface literally labelled as ‘MLfix’. It probably should just say ‘Auto Fix’ or something, leaving the ML component as an implementation detail.

SVG Fonts are a relatively new phenomenon that enable richer designs of each character. Pixelmator Pro 1.2 adds support for these fonts and even includes one, Glibert Color, with the installation so you can try it out right away.  SVG characters can be composed of multiple colors and textures, with varying transparency. Gilbert Color is a perfect demonstration of these new capabilities.

Download Pixelmator Pro from the Mac App Store, priced at $30 for a limited time(normal price: $60). The update is free for existing customers.