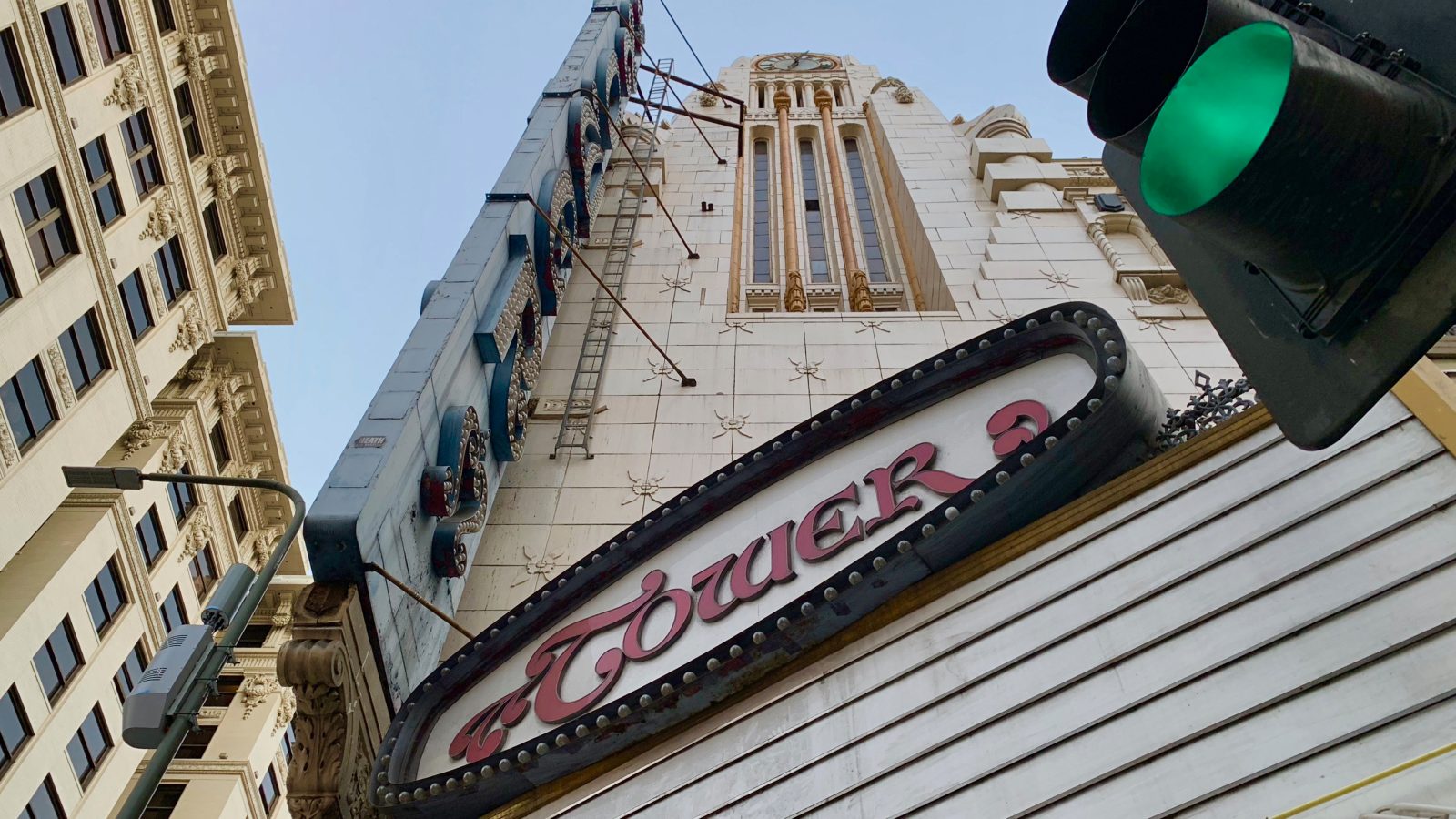 Many of the most culturally significant metropolitan centers in the United States — like New York, Chicago, and San Francisco — are home to the latest prominent Apple retail stores. Los Angeles has long been an exception, lacking a downtown location of any kind. That’s set to change, as Apple has confirmed plans to establish a major presence at the Tower Theatre in L.A.’s Broadway Theater District. The new store will undoubtedly drive increased foot traffic and new development in the city’s historic core, transforming the culture around it. 9to5Mac visited the Broadway District to document the Tower Theatre’s condition before Apple’s renovation and the downtown community as it exists today.

802 S. Broadway is an imposing structure. Even in its current tired state, the theater’s ornate clock tower draws your eye from any approach. While the Tower Theatre is far from the largest building on Broadway, its architecture is perhaps the most unique.

The 1927 facade is designed in the Baroque Revival style and cladded in off-white terra-cotta. Patterned sculptures and molding cover the building. Deceptively resilient, these details appear delicate and fragile, yet largely remain intact after weathering 91 years. A notable exception is the very top of the clock tower, which was destroyed and removed following an earthquake. 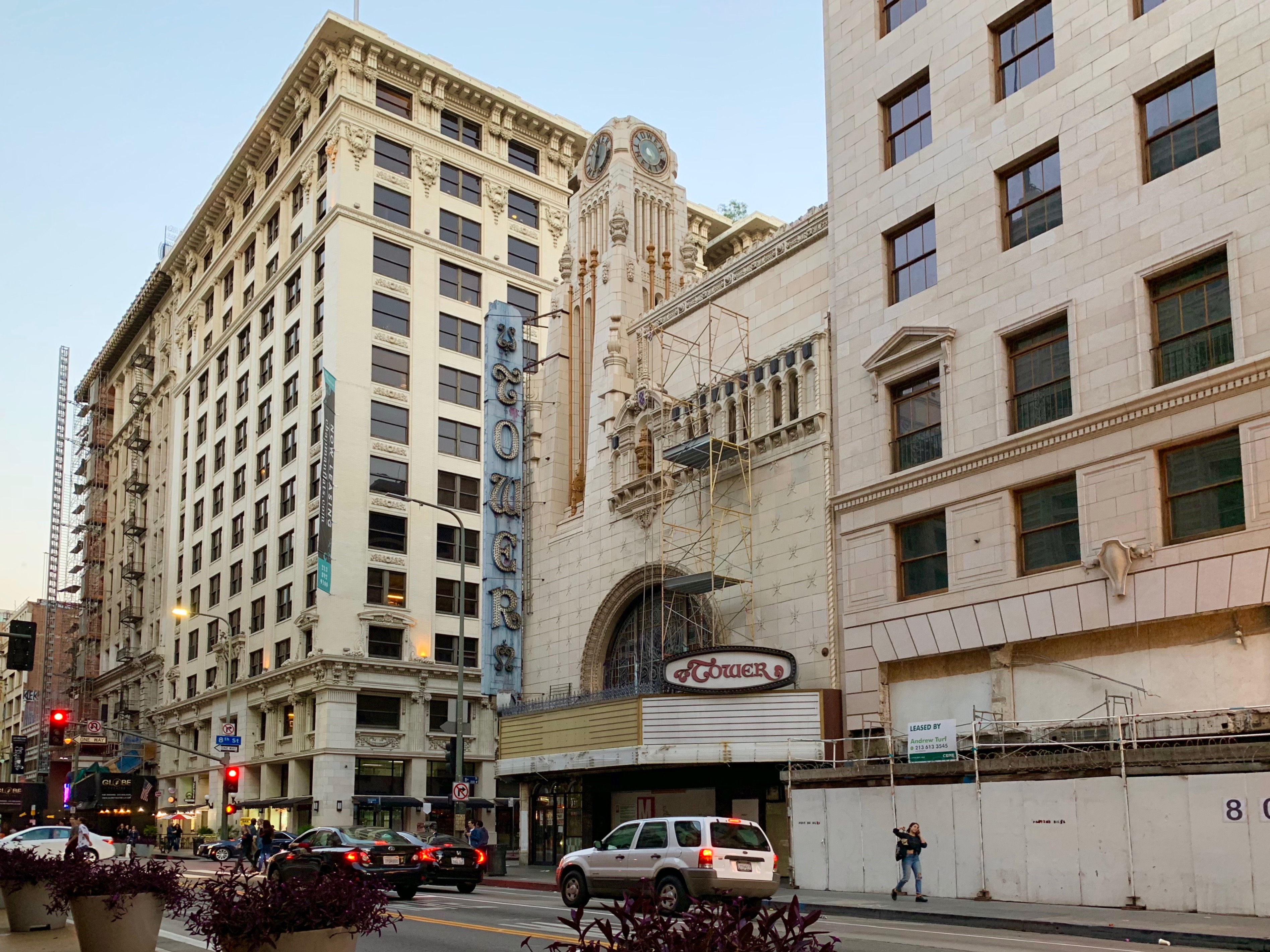 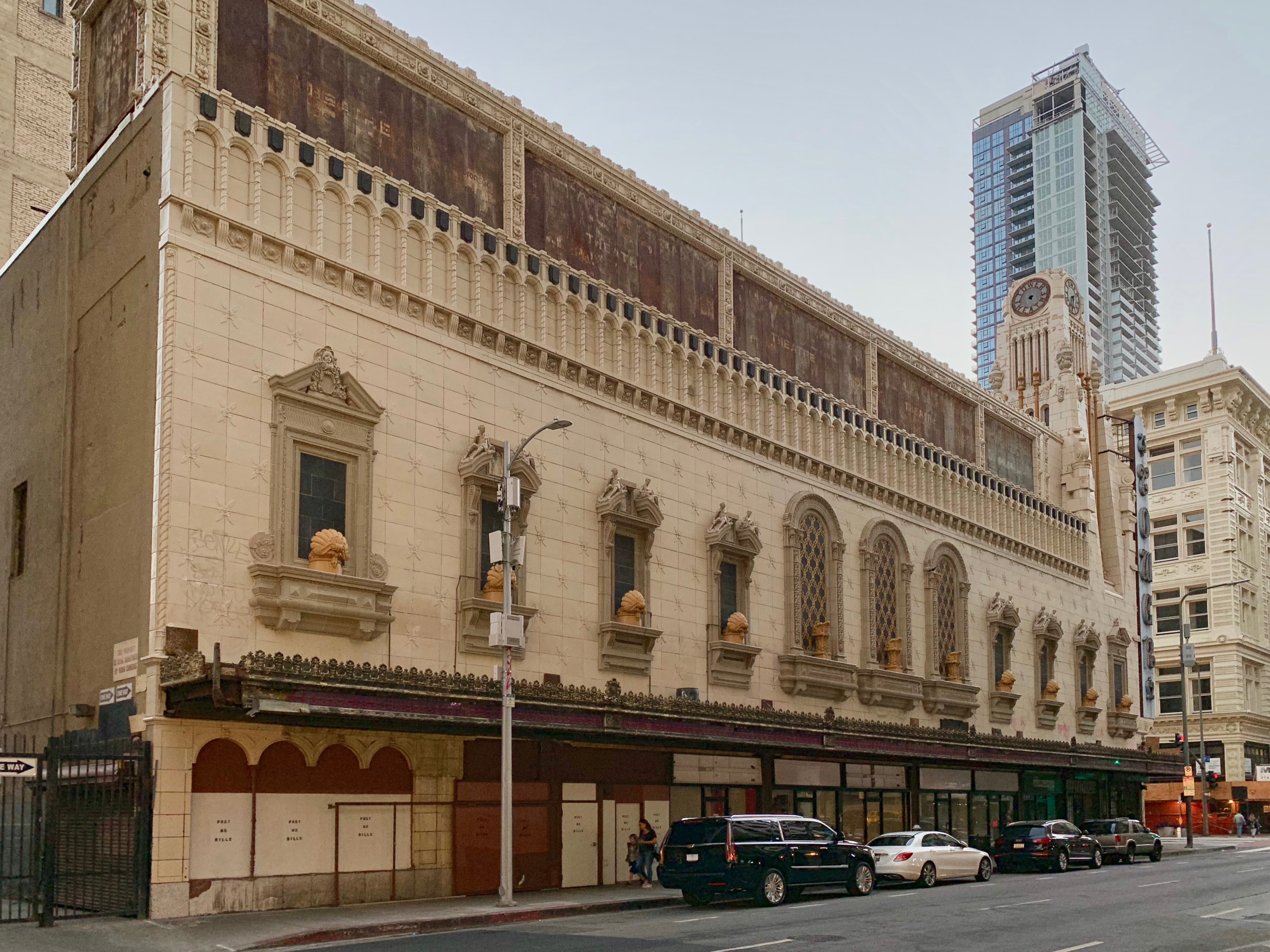 The Tower Theatre has a rich history of technology. In 1927, it premiered the first feature-length talking film and was the first theater in Los Angeles wired for sound. It has been air-conditioned since day one. After being renamed the Newsreel Theatre in 1949, a news ticker tape ran along the upper level of the lobby. Since closing as a movie theater in 1988, the space fell into disrepair. The original marquee was replaced long ago, and multiple renovations have altered interior details.

The Tower Theatre today and in 1950 as the Newsreel Theatre. (Archival photo: Los Angeles Theatres)

The Broadway Theater District was once best described by its name, but the situation is much more complicated today. Buildings lining the streets tell the story of over 100 years of prosperity, change, neglect, and revival. Some grand theaters from the district’s heyday remain. Other buildings are shuttered and dark. More recently, new tenants — like Apple — have begun repurposing forgotten spaces. 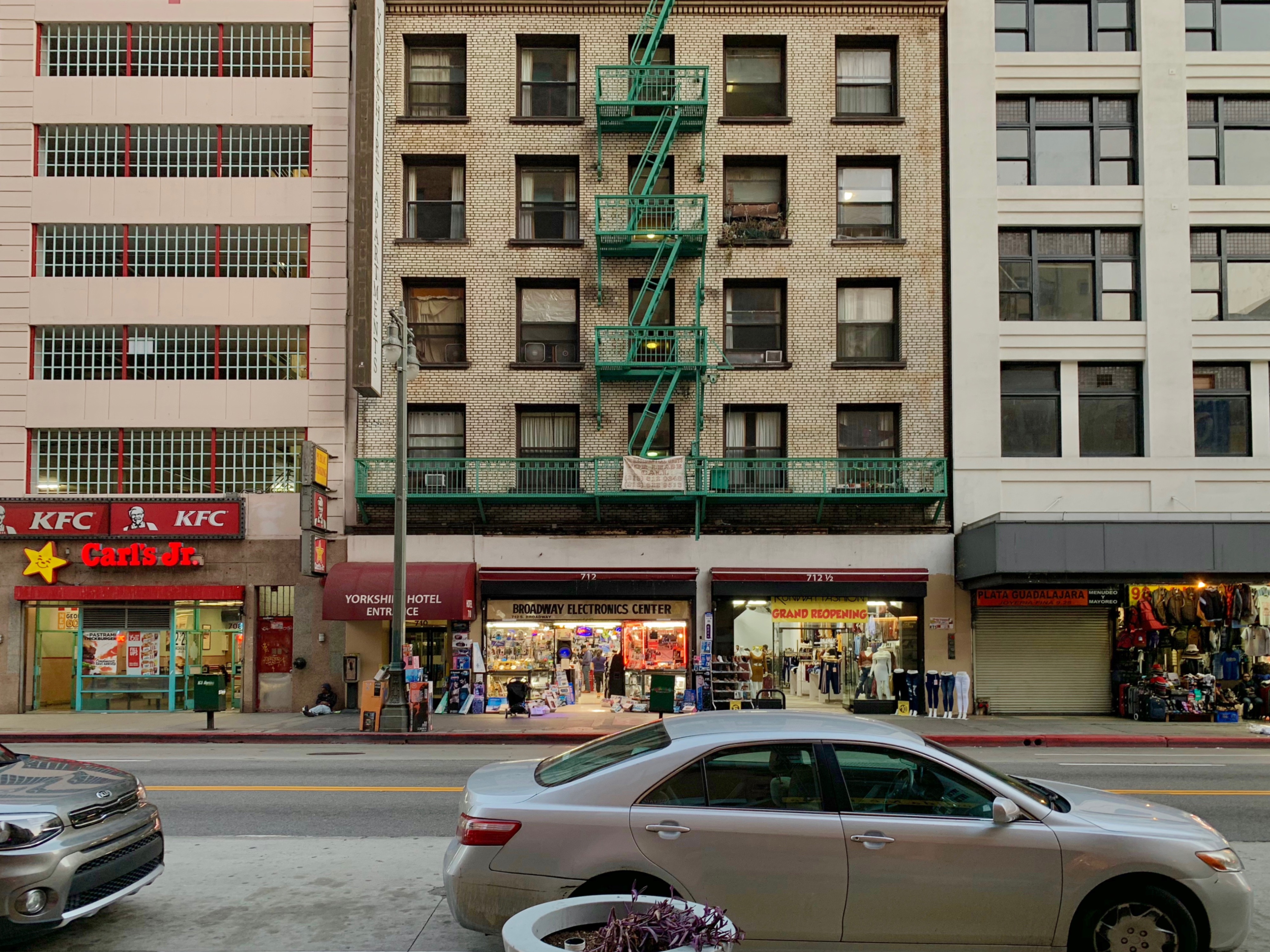 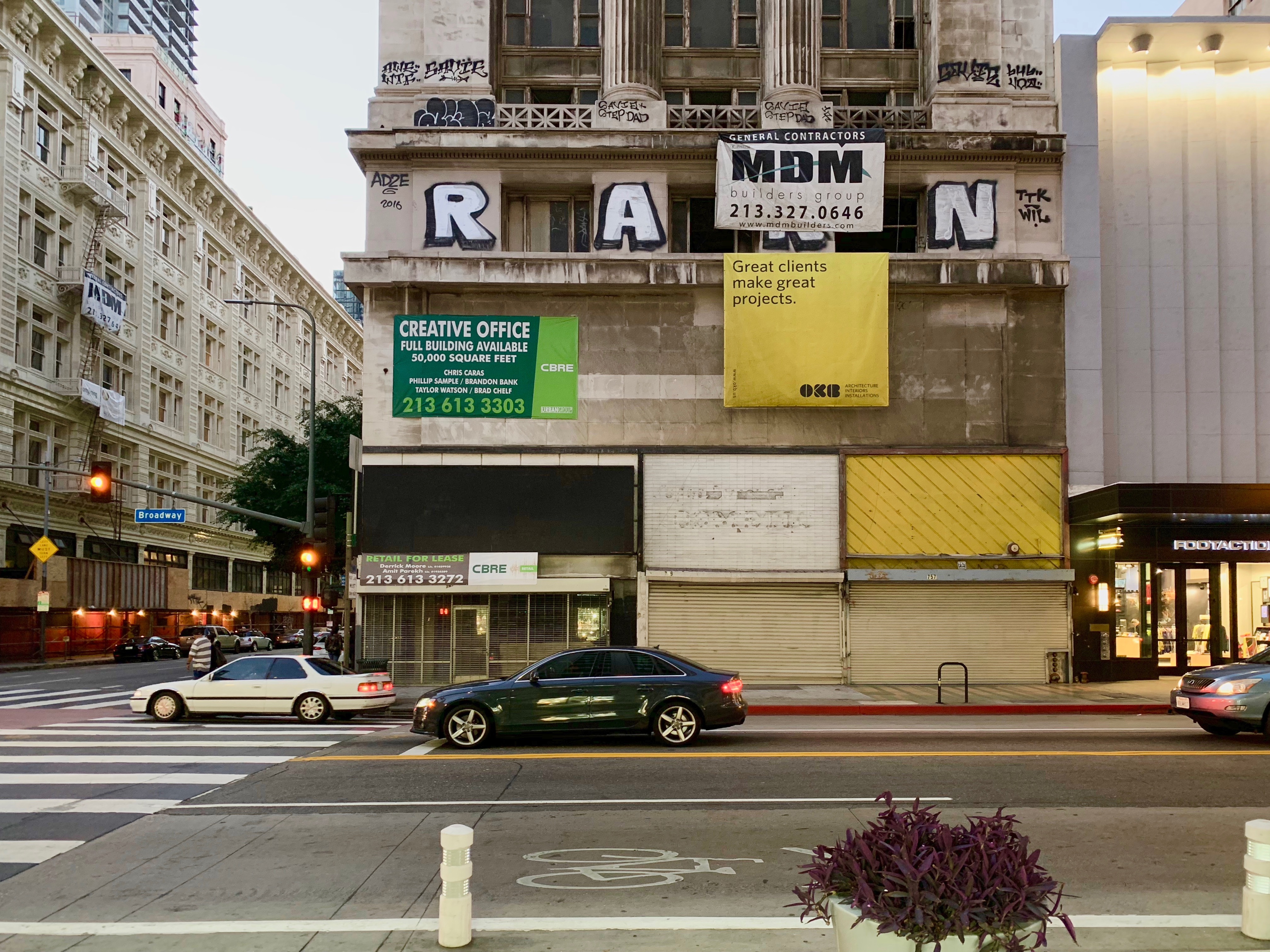 Back in 2015 when I first heard the rumor that Apple was considering the Tower Theatre, I was admittedly skeptical. The location just didn’t seem “right” for an Apple store. But that was almost three years ago. Since then, retail SVP Angela Ahrendts has taken great interest in city centers and cultural hotspots. Global flagship stores have opened on the Chicago riverfront and in the heart of Milan. 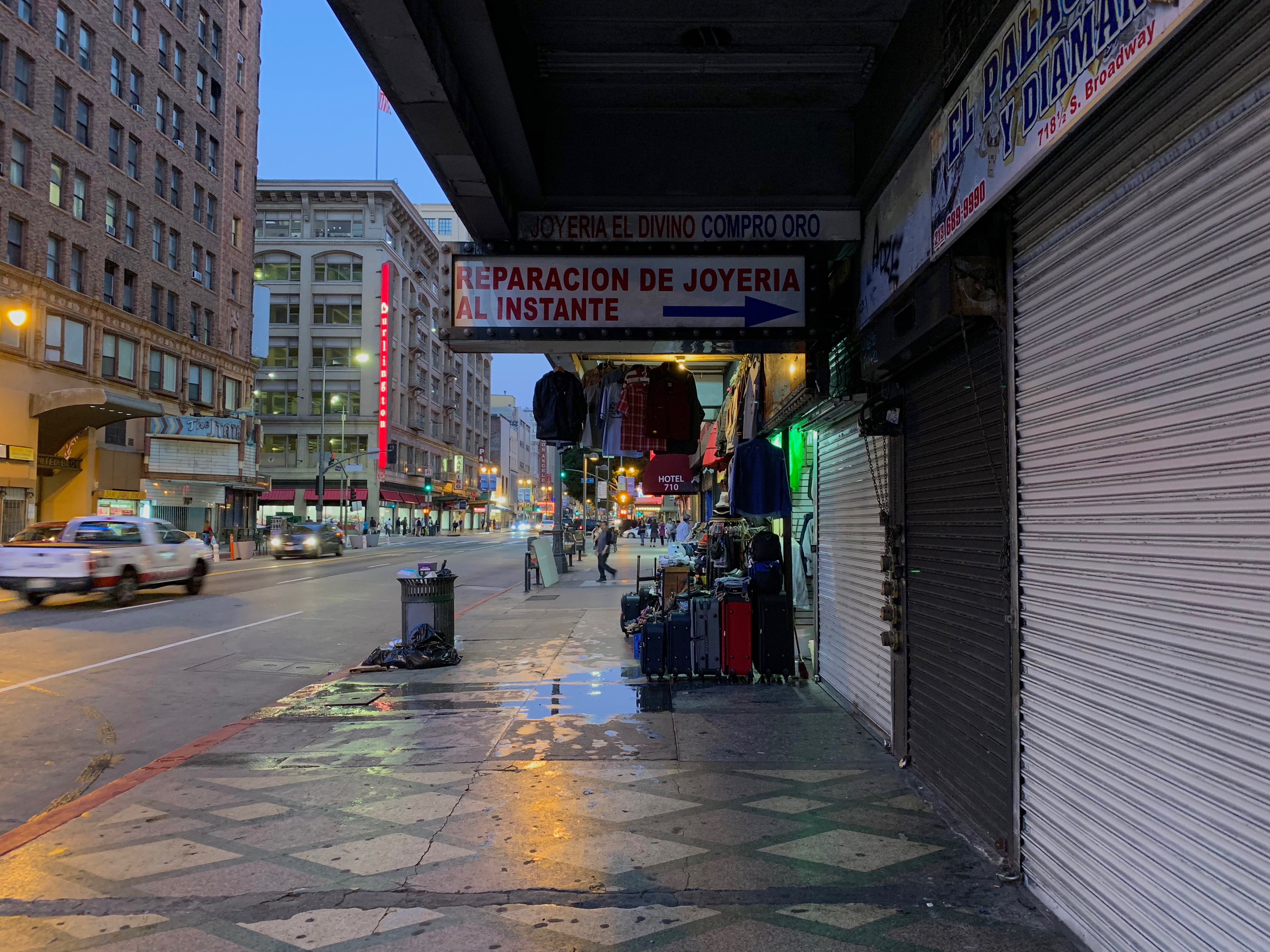 Still, moving into historic downtown L.A. is an entirely unique endeavor. I’ve visited dozens of Apple stores throughout the U.S., and none of the communities surrounding them are quite like this. Broadway feels distinctively “real” and surprisingly gritty for high-end retail.

Bordering downtown’s Jewelry District, many of the surviving stores near the Tower are locally owned jewelers and mom-and-pop shops. As I walked the blocks in the early evening, the community’s diversity was fully on display. Covered grocery carts tucked in shuttered doorways were a sharp reminder of those less fortunate. Shop owners were sweeping up and closing their doors for the night. Neon-lit theaters were bustling with activity as patrons lined up.

The Grove and The Americana at Brand.

After my trip to the Tower Theatre, I visited three other Apple stores in the Los Angeles vicinity – Glendale Galleria, The Americana at Brand, and The Grove. The contrast between these locations and downtown couldn’t be more stark. The Grove and The Americana in particular, while beautiful, more closely resemble retail theme parks than organic communities. They feel manufactured, not “real.” For some, the roughness of the Broadway district will be a turnoff. But as a creative gathering place, I think the Tower Theatre is ideal. 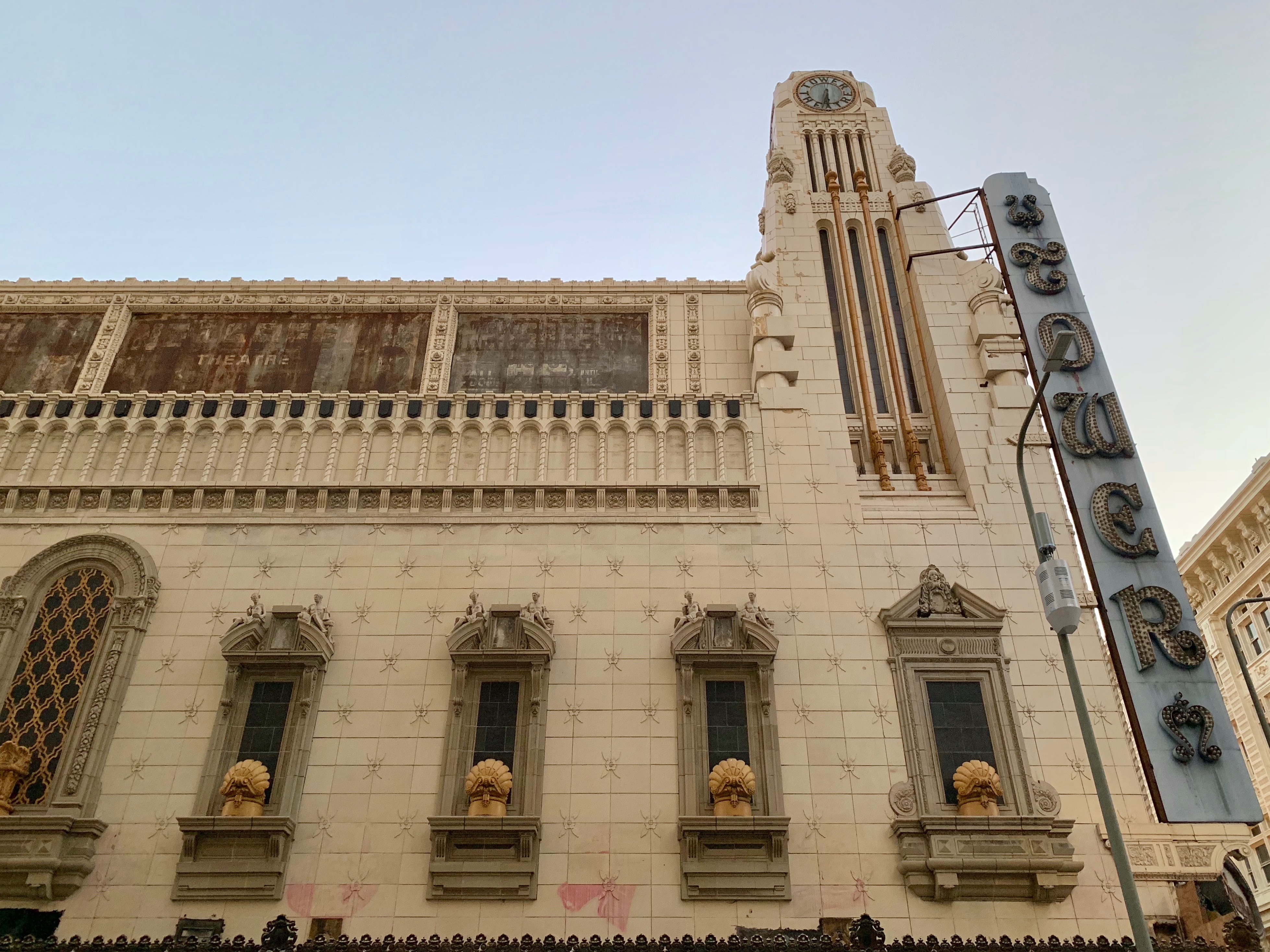 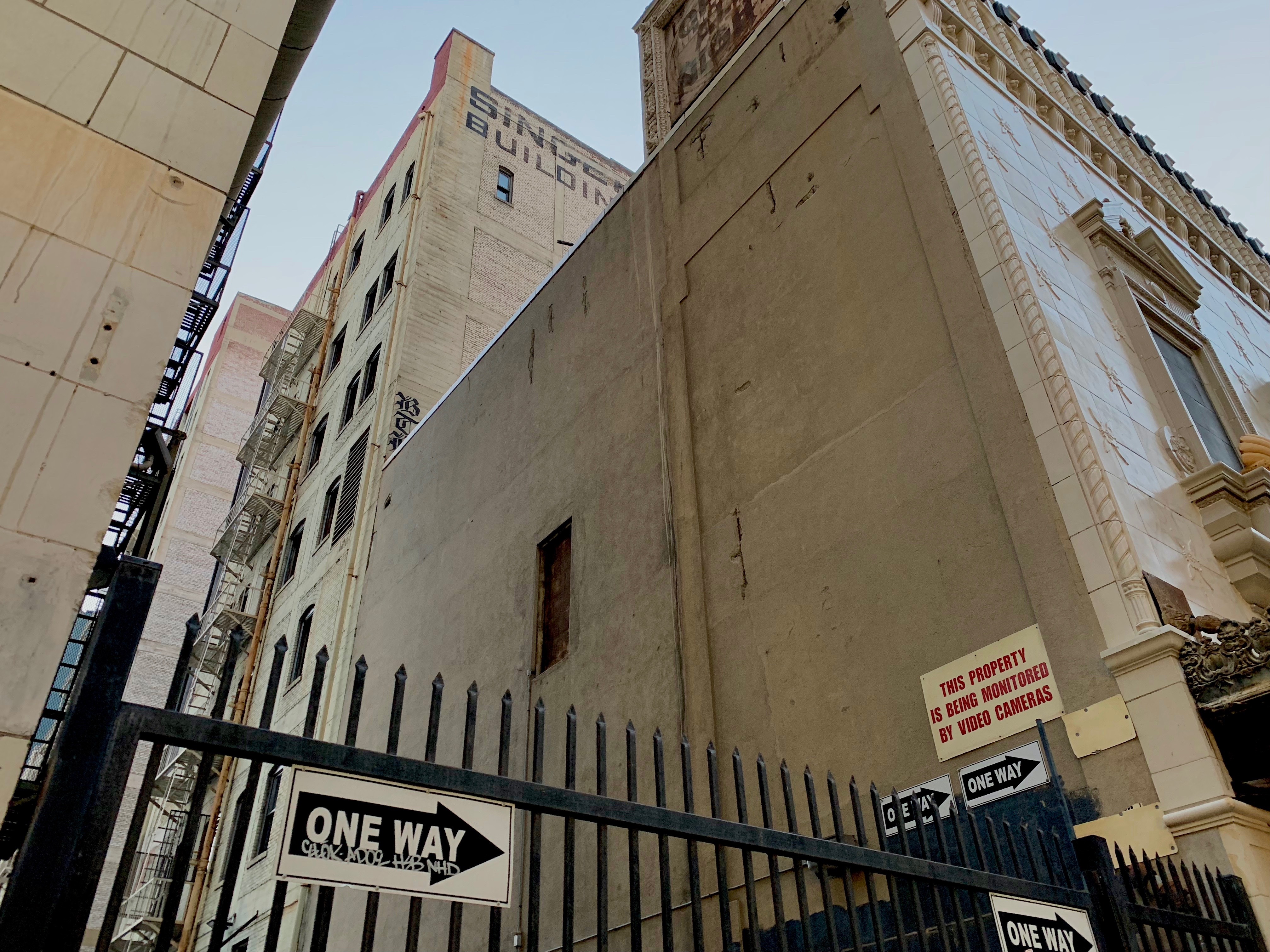 A forgotten doorway once used to load the Tower Theatre’s pipe organ.

Even during my self-guided impromptu photowalk, seeing the texture of the city was fascinating. Combined with the historic architecture and cinema legacy of the district, Today at Apple sessions at the Tower could offer richer experiences than any other store.

Classes on filmmaking, storytelling, and music production seem like a natural fit in a city famous for film. Product sales will be secondary. Broadway is also less than two miles from L.A.’s Arts District, where street murals and galleries are plentiful. The possibilities of collaboration between local talent and Apple’s Creative Pros are endless. 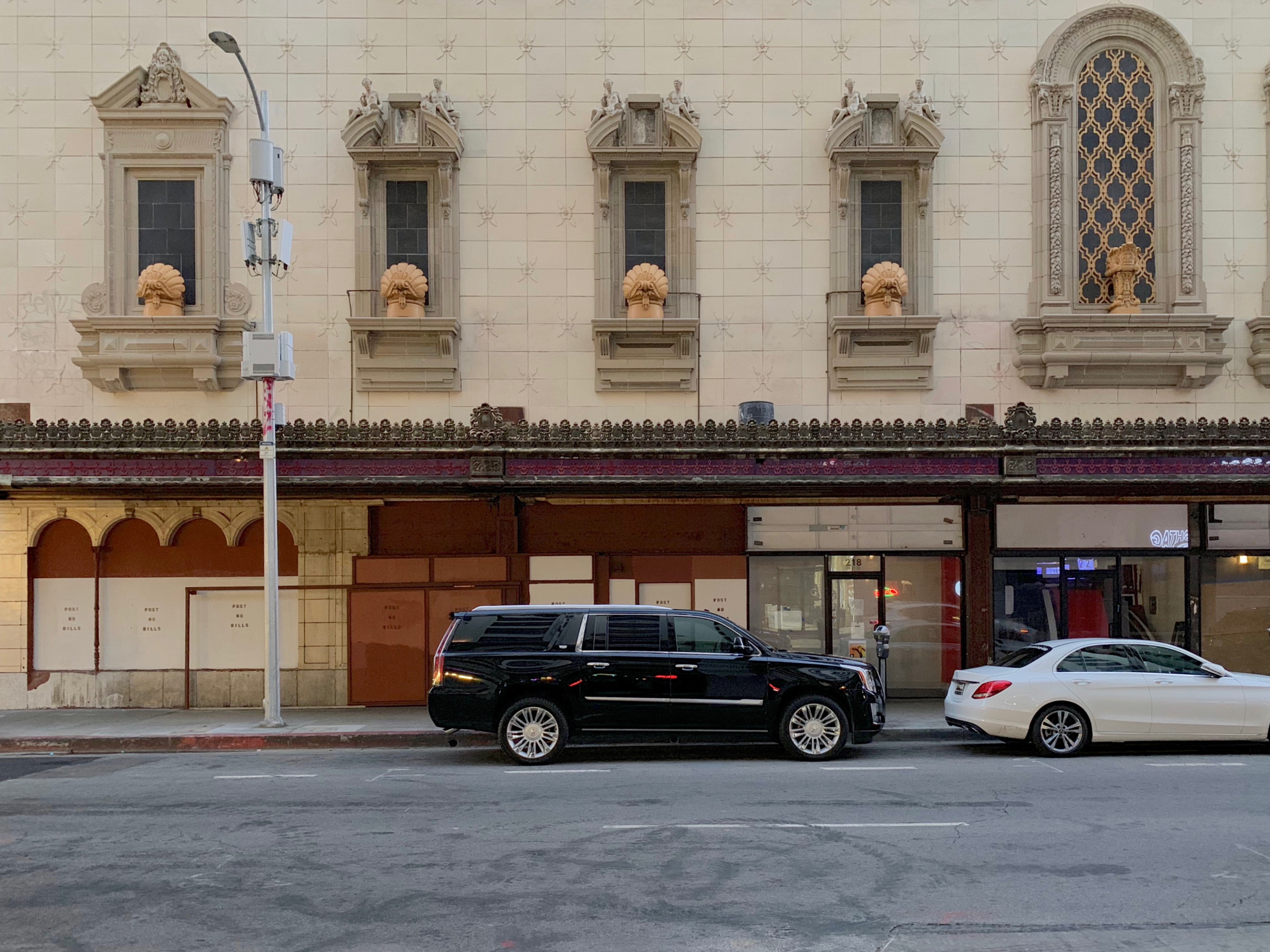 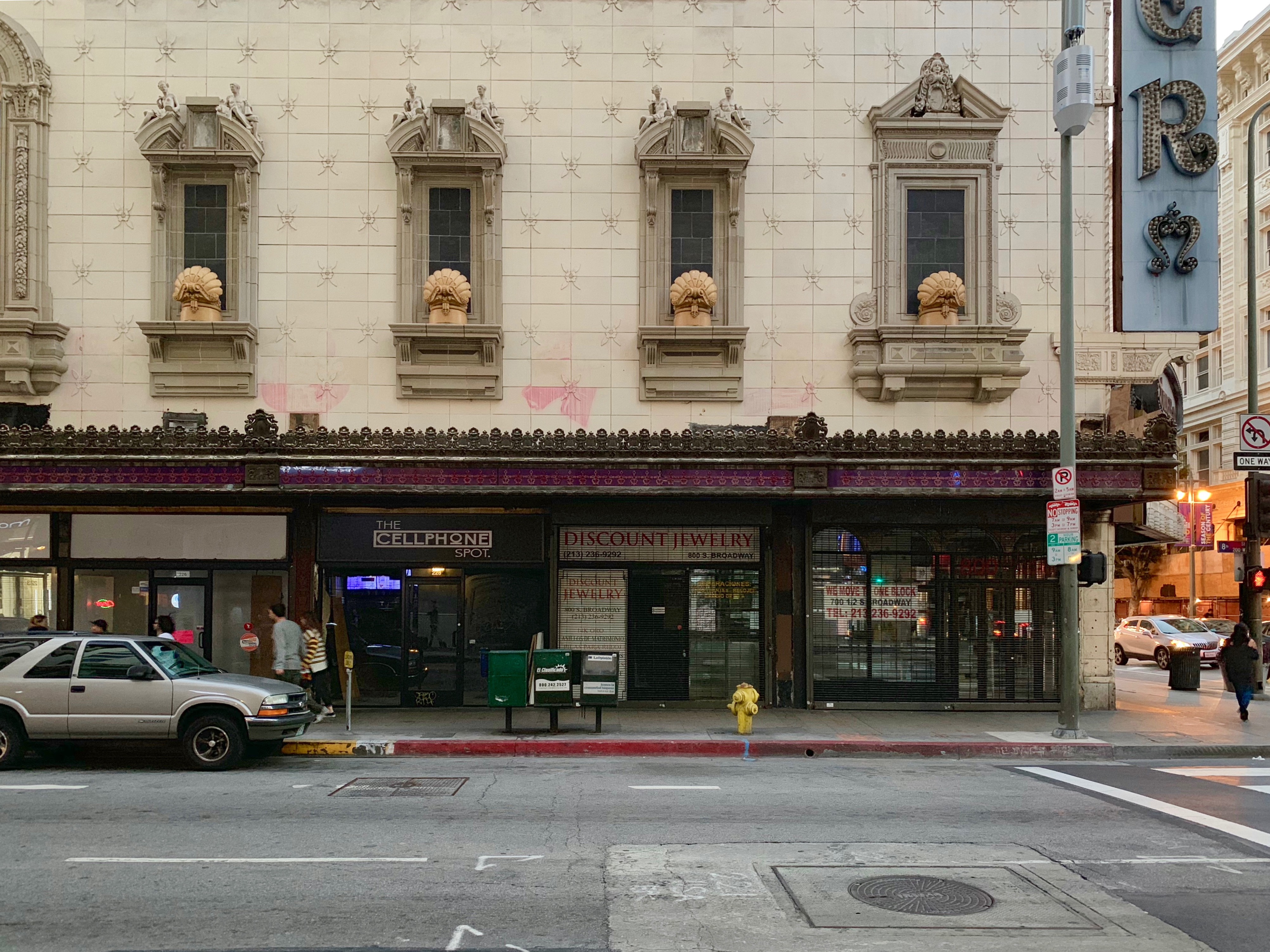 The Tower Theater restoration will be “in the upper echelon of what Apple does,” according to BJ Siegel, Apple’s senior director of retail design. While renovations at this point are mostly internal, all signs point to a major transformation. Postings on the building reference both K.C. Restoration and Matt Construction, local firms with extensive background in historical restoration. Architecture firm Foster + Partners, responsible for Apple Park and other flagship stores, was present at a meeting of L.A.’s Cultural Heritage Commission regarding the theater.

Apple’s investment in Los Angeles is significant, but also depends on others to be successful. Can the Theater District be revitalized without destroying the culture that makes it unique? Changes are already underway. Two doors down from Apple’s space, The Rialto Theater has been converted into an Urban Outfitters location (a Vans flagship store is planned for the space in between).

While I appreciated seeing the restored marquee lit up, the juxtaposition between old and new was admittedly odd. Across the street, a massive department store is currently being rehabilitated to become the Broadway Trade Center, an upscale, mixed-use complex. Construction barriers and scaffolding line the streets of downtown. The progress feels sudden. 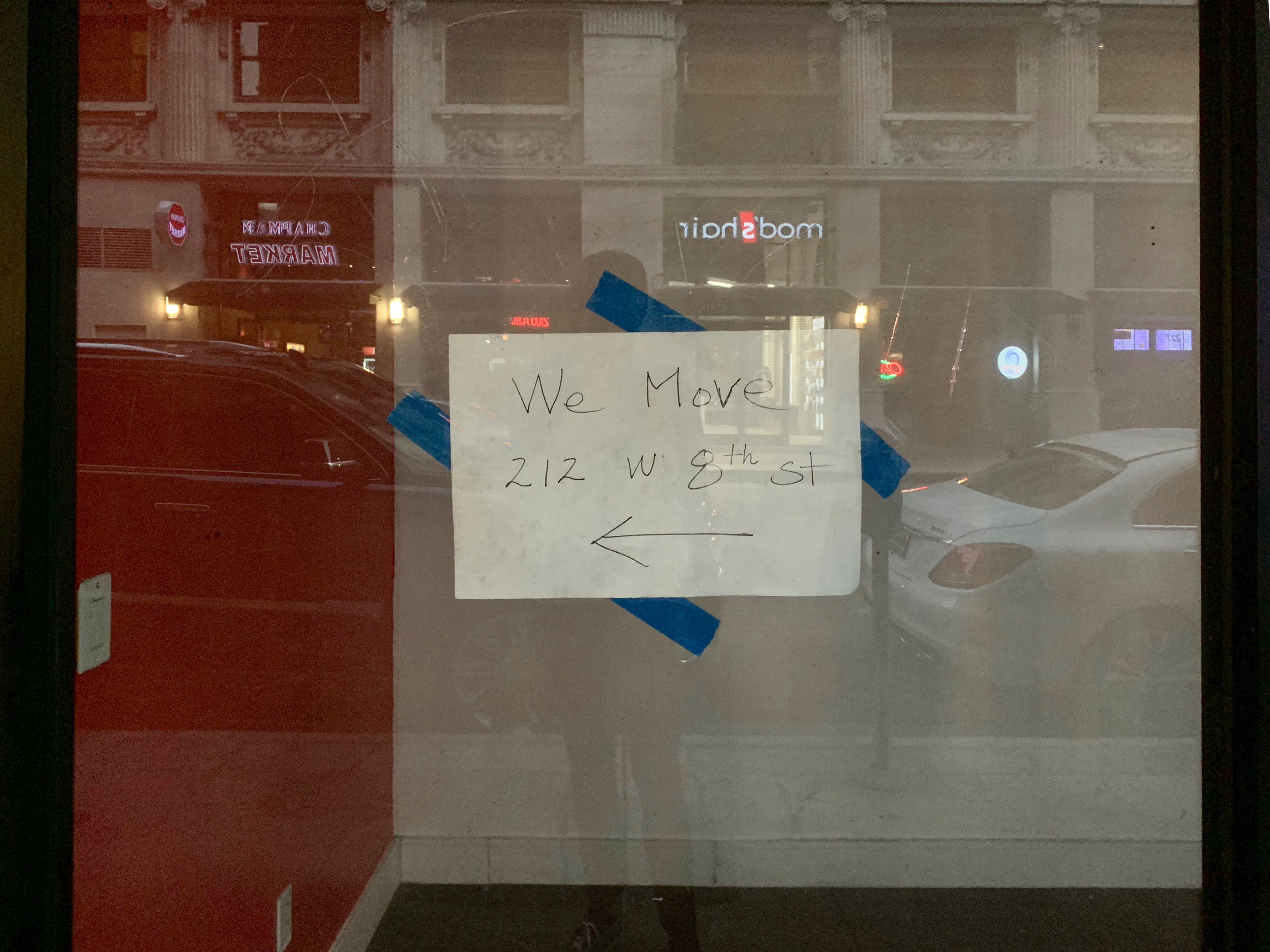 Even at the Tower Theatre, hints of the future are found. The building’s 8th Street facade is subdivided into tenant space. These shops were displaced ahead of Apple’s arrival. Signs in the windows directing customers to new locations offer a twinge of guilt with their handwritten text and arrows. Apple isn’t really at fault here — cities across the United States struggle with the effects of gentrification — but experiencing it firsthand was eye-opening. 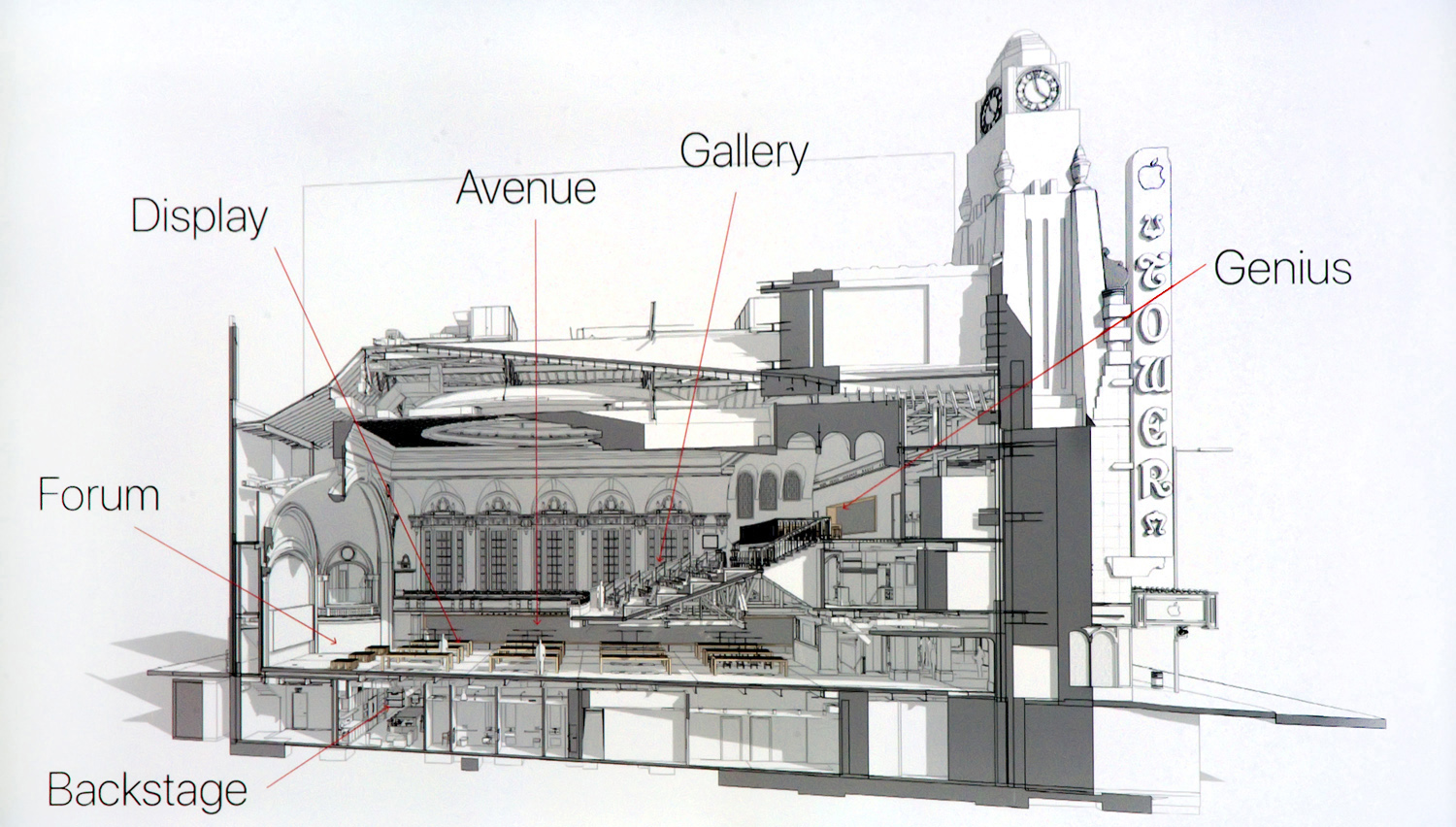 The Tower’s closest kin can probably be found in Brooklyn, where Apple stores downtown and in Williamsburg have made a splash in communities in the midst of change. Williamsburg’s store has become popular more for its consistent lineup of performers and artists than as a retail space. When well executed, these programs can help unique neighborhoods maintain a sense of identity rather than contribute to their homogenization. Hopefully the same can ring true in Los Angeles. 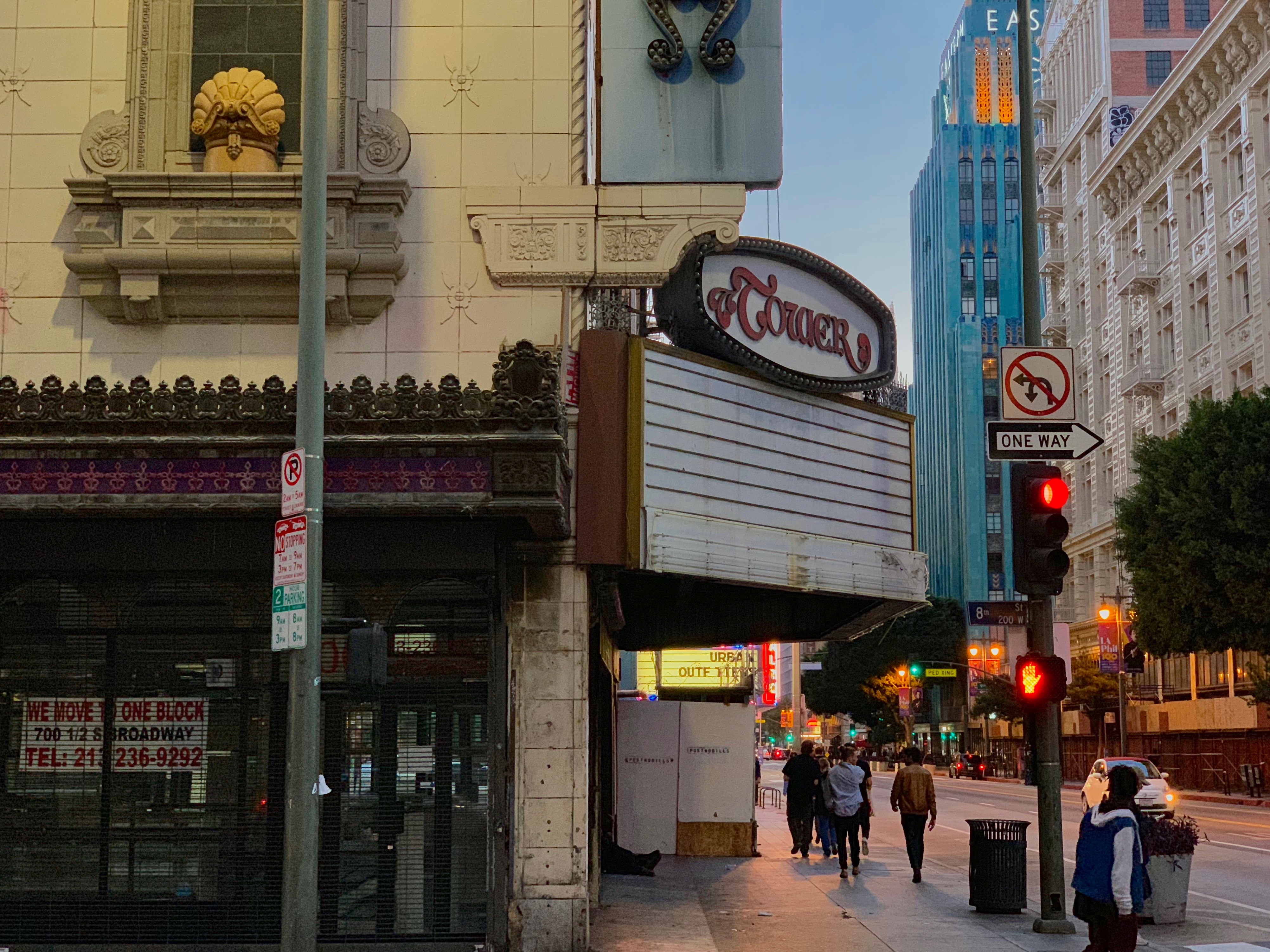 The Tower Theatre is the most fascinating project in Apple retail today. At this point, the company’s contemporary store layout and retail philosophy is over three years old. We’ve seen the strategy implemented countless times around the world. Downtown L.A.’s store has the potential to be the ultimate expression of Apple’s ideals, once again redefining retail spaces.