Details: Apple’s first store in Kyoto opens as a community centerpiece for Japan 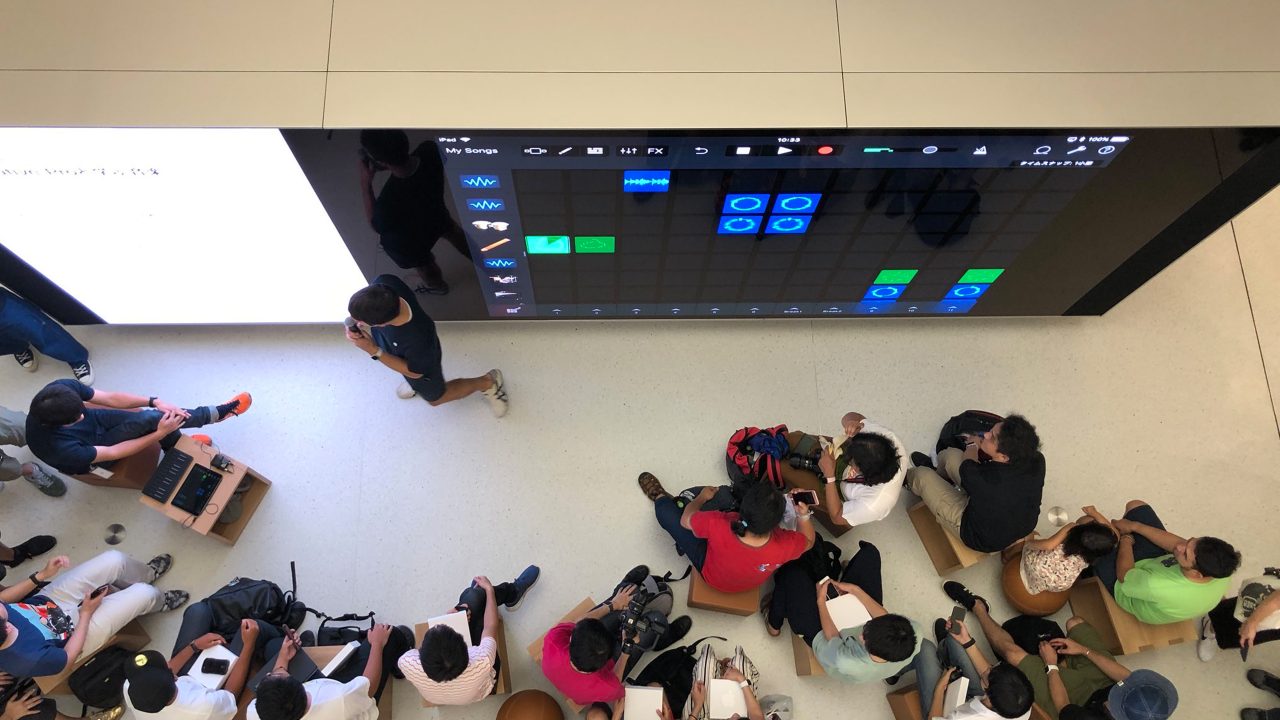 Nearly 15 years after opening its first store outside of the United States in Tokyo’s Ginza district, Apple has reiterated its fondness for Japan with a modern store for an ancient city – Kyoto. The store is positioned as a cultural centerpiece for the region, marking a key milestone in Apple’s renewed investment in Japan.

While Kyoto is significantly smaller than Japan’s modern capital, it’s fared well as a center for innovation. Dotted by historic sites and monuments, the city blends art and technology in a way that makes it a natural fit for Apple.

Since the rise of the iPhone, several high profile games have been developed in Kyoto, recently curated by Apple in an app story. Friend of the App Store and technology giant Nintendo is also based out of Kyoto. After considering the city for a significant amount of time, Apple’s representatives noted that they hope the retail expansion will push Kyoto to be even more innovative. 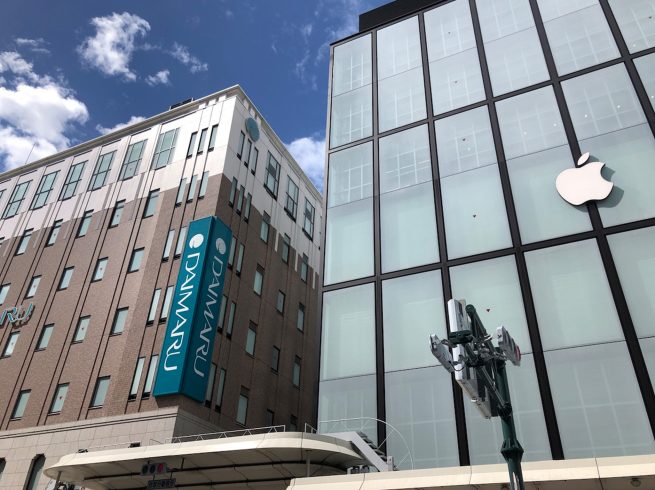 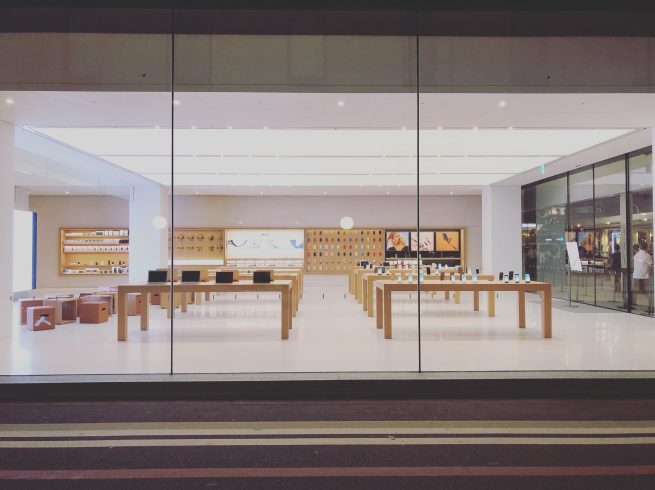 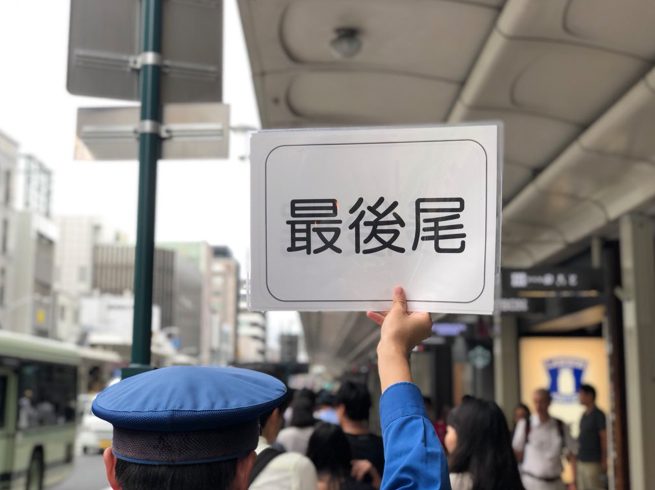 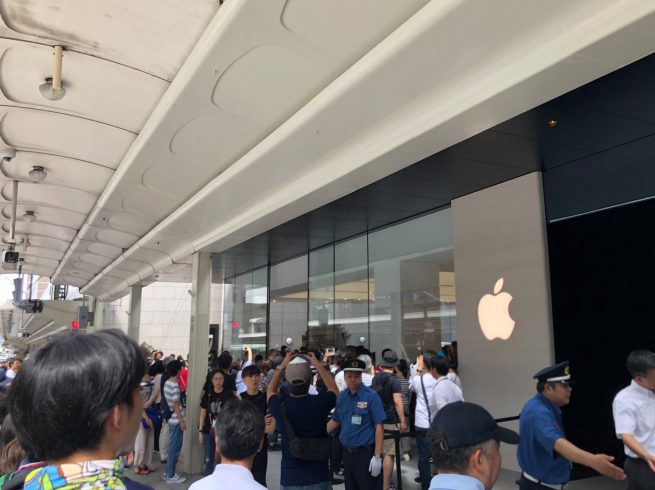 Hours before opening at 10 a.m. local time, Apple fans lined up outside the Kyoto Zero Gate complex located on Shijō Dori, a central commercial thoroughfare home to the Daimaru department store, among others. While the building’s historic architecture references begin outside with ceramic printing on large glass panels covering the tower’s upper floors, Apple has drawn heavily from traditional Japanese culture to design the interior of the three-floor store, while still maintaining an aesthetic that will be instantly familiar to anyone who has visited one of Apple’s over 100 recently modernized stores. 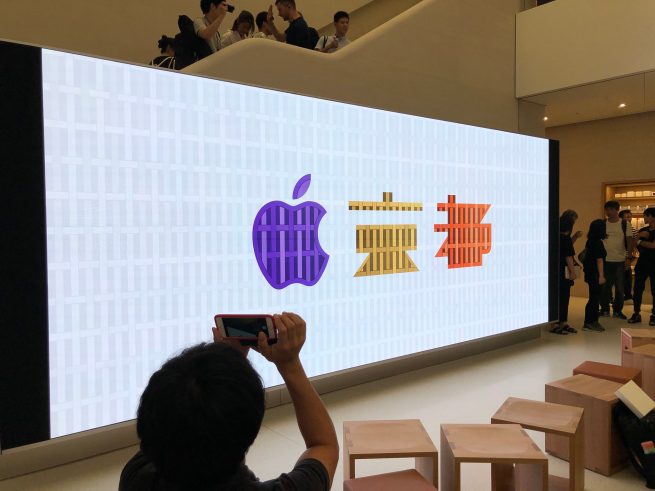 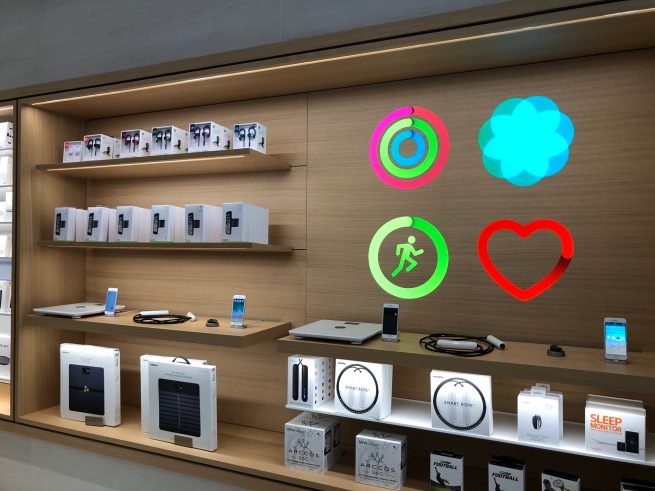 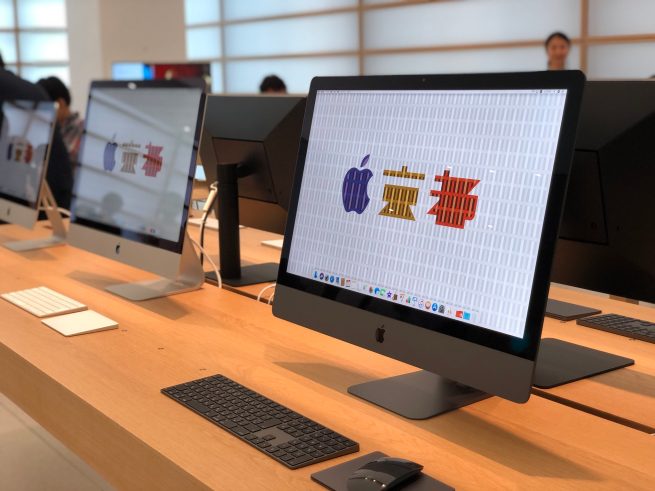 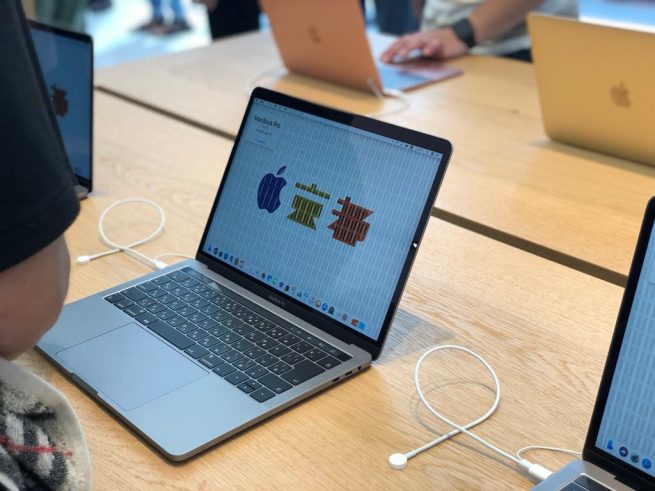 Just beyond a curved glass window corner evoking a modern reinterpretation of Edward Hopper’s Nighthawks, equally transparent doors open to the store’s first level, wrapped on two sides by floor-to-ceiling glass. According to Apple, the open feeling is designed to blur the boundaries between the busy street and (ideally) calm interior. 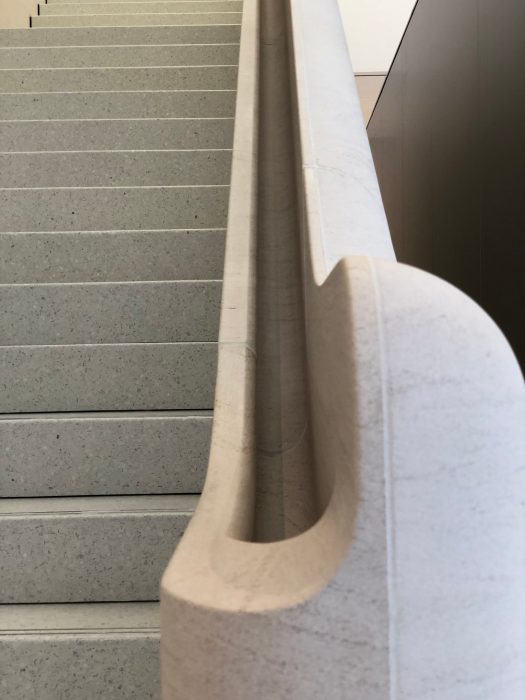 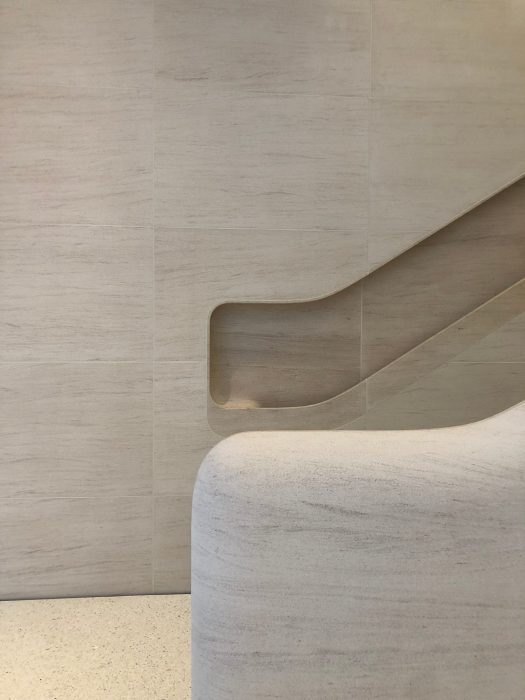 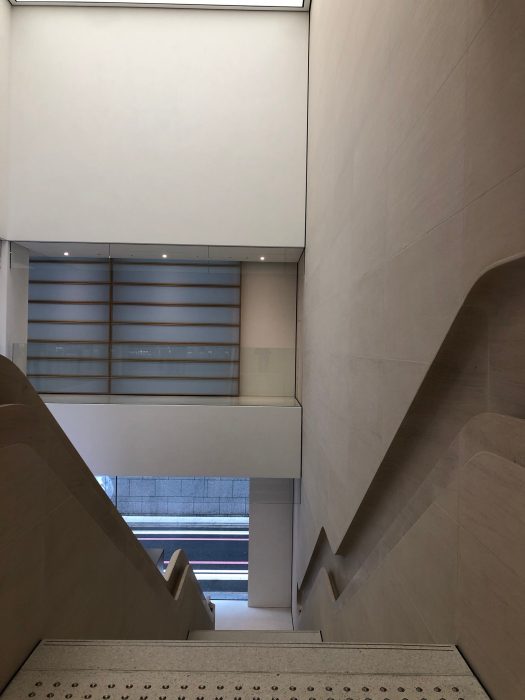 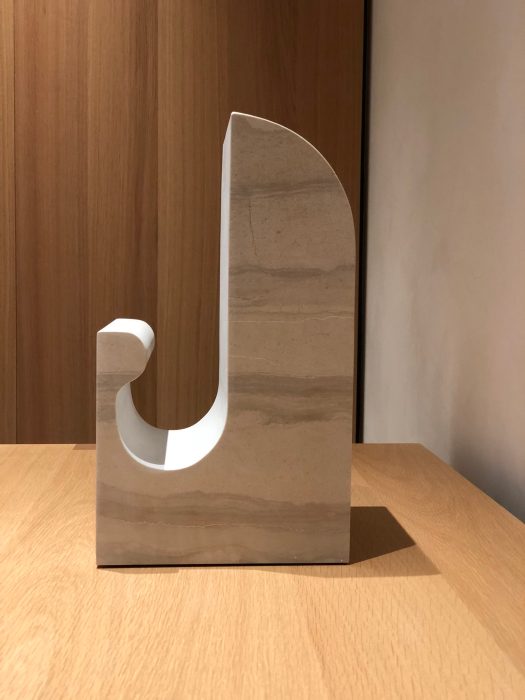 Near the back of the store, Japan’s second 6K video wall – and first to be freestanding – provides a backdrop for Today at Apple sessions. The forum area opens to a second level balcony, accessed primarily by a stone staircase with a carved handrail modeled after similar designs at Steve Jobs Theater and Apple’s recent Regent Street and Orchard Road stores. On the way up the stairs, visitors can catch a glimpse of the unique plaster used on some of the building’s walls, created and installed by local craftspeople. At the top of the steps, a three-layer laminated glass barrier wrapping the balcony begins with a curved edge matching the rounded corners of the handrail. 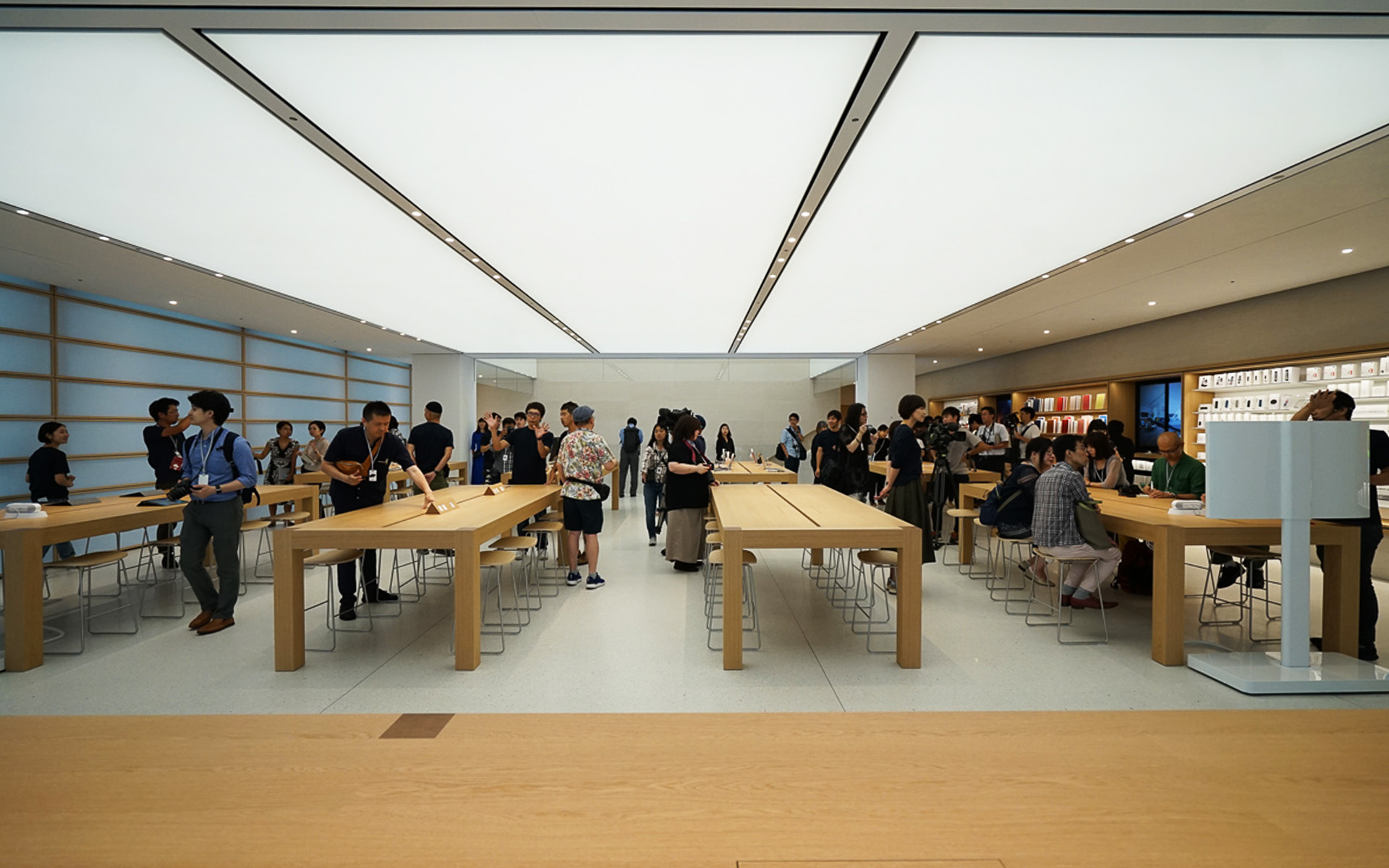 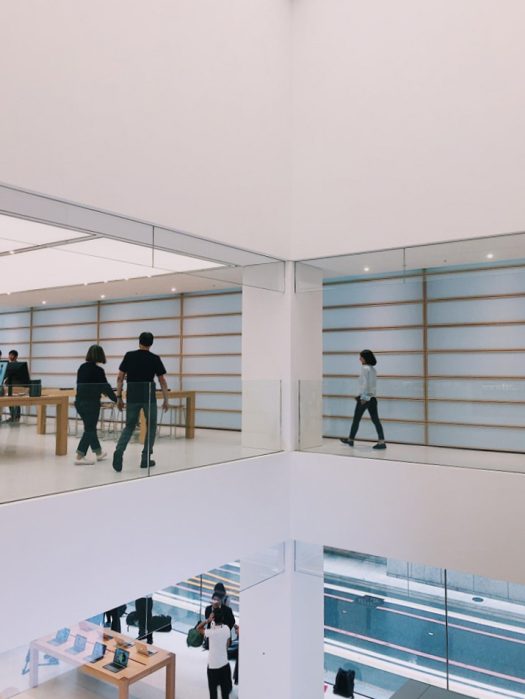 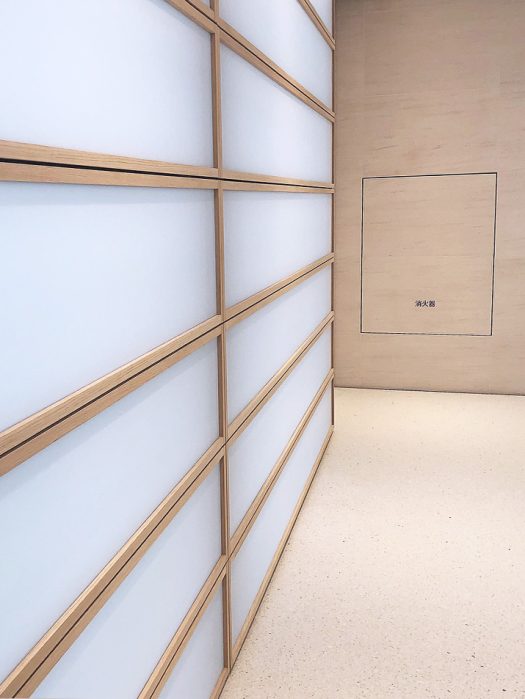 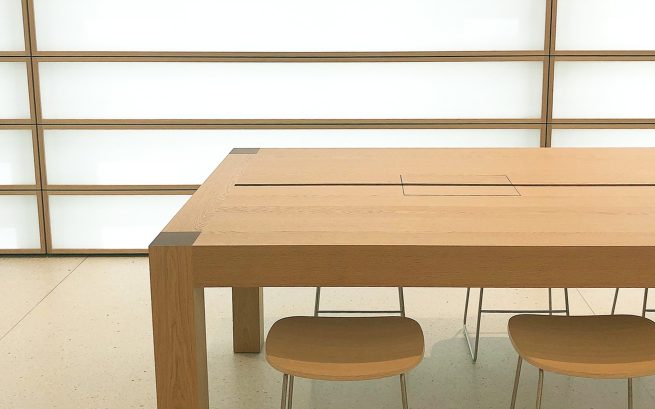 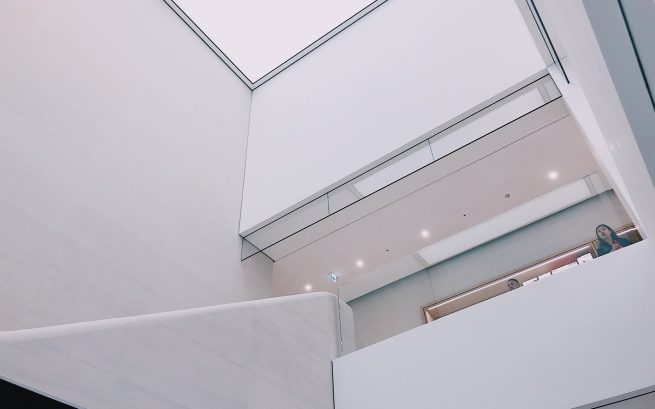 The store’s second level is primarily devoted to space for training and support. A double length table spanning nearly the entire width of floor is lined with seats for customers waiting for Genius Bar appointments. Instead of a transparent facade like below, Apple has covered two walls with a wood frame inlaid with translucent paper. The assemblies are known traditionally as Shōji dividers, and allow ambient daylight to filter through. Apple employed razor-thin stone sheets to create a similar effect in their latest store to open in Macau. 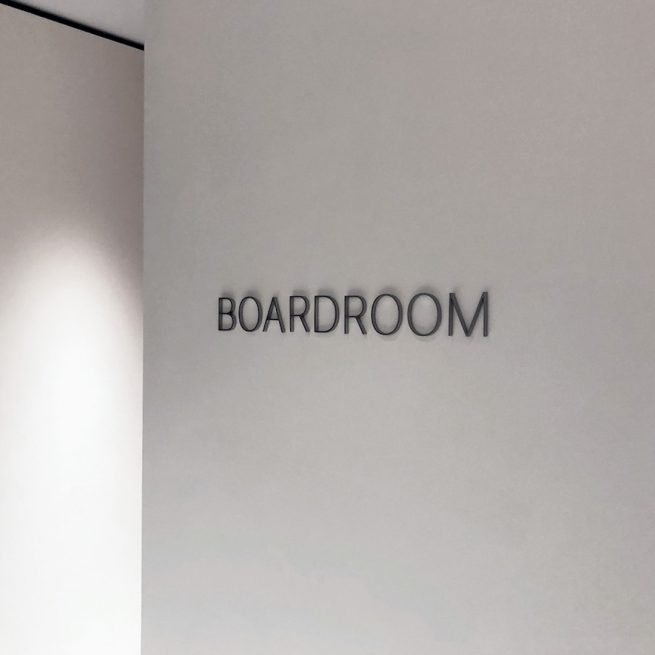 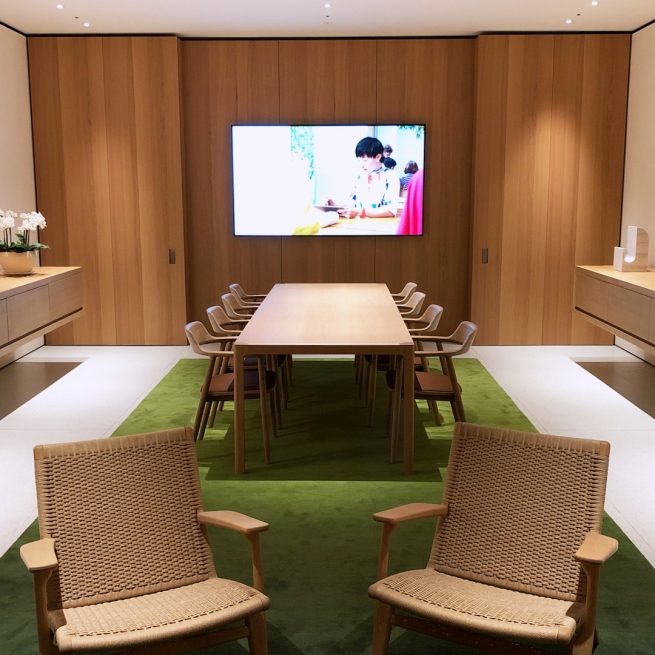 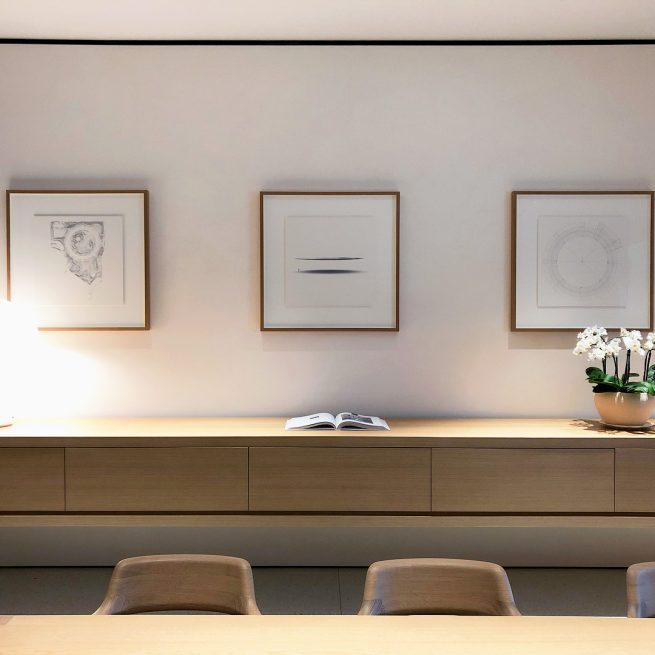 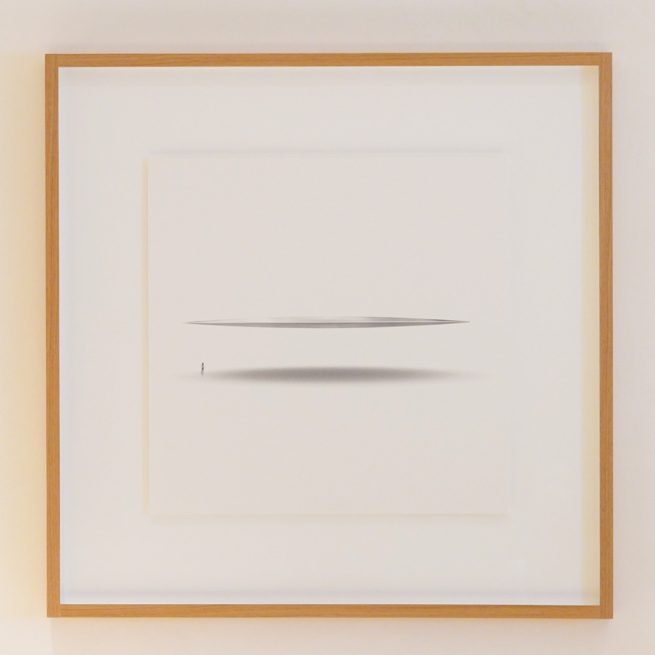 Additional tables on the second level are reserved for smaller Today at Apple sessions and Mac desktops. Accessory displays line the remaining wall. While most customers will conclude their visit to the store here, businesses and special guests may have the opportunity to visit the third level’s Boardroom, a private meeting area. Kyoto’s store is the first in Japan to feature a Boardroom, which has been modeled after the conference rooms at Apple Park. All of Apple’s most significant stores in recent years have featured a similar space. 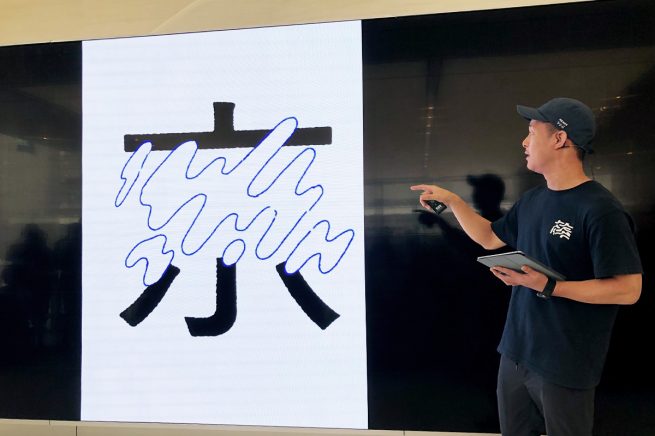 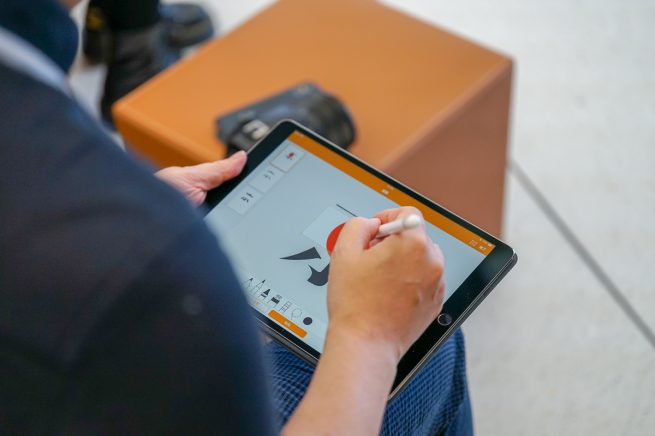 According to Apple, more than 100 employees will work at Kyoto, a large team for a modestly sized store. The team members are not all local to Japan, some arriving from Amsterdam, Miami, and New York. Collectively, they speak 12 languages. 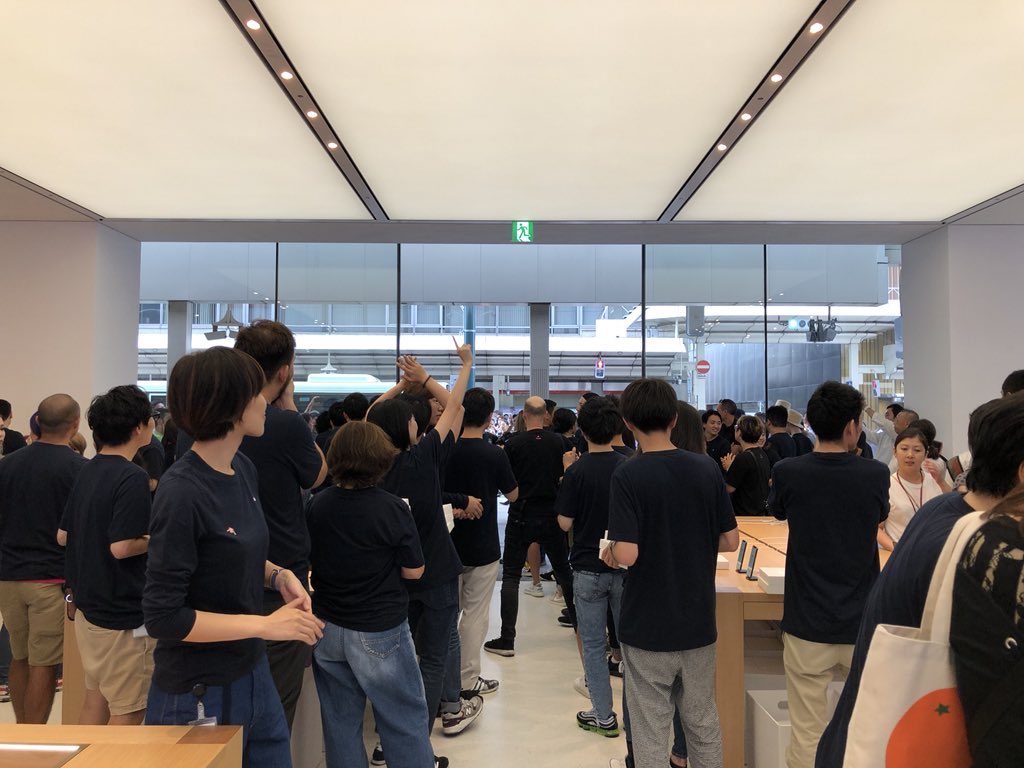 A signifiant amount of time and energy will be used to support Today at Apple programming. Starting next month, a special series of educational and creative sessions will begin at the store. Apple has partnered with Japanese artists, designers, and craftspeople who are “working at the edge between modern and traditional” to provide unique content relevant to local culture. 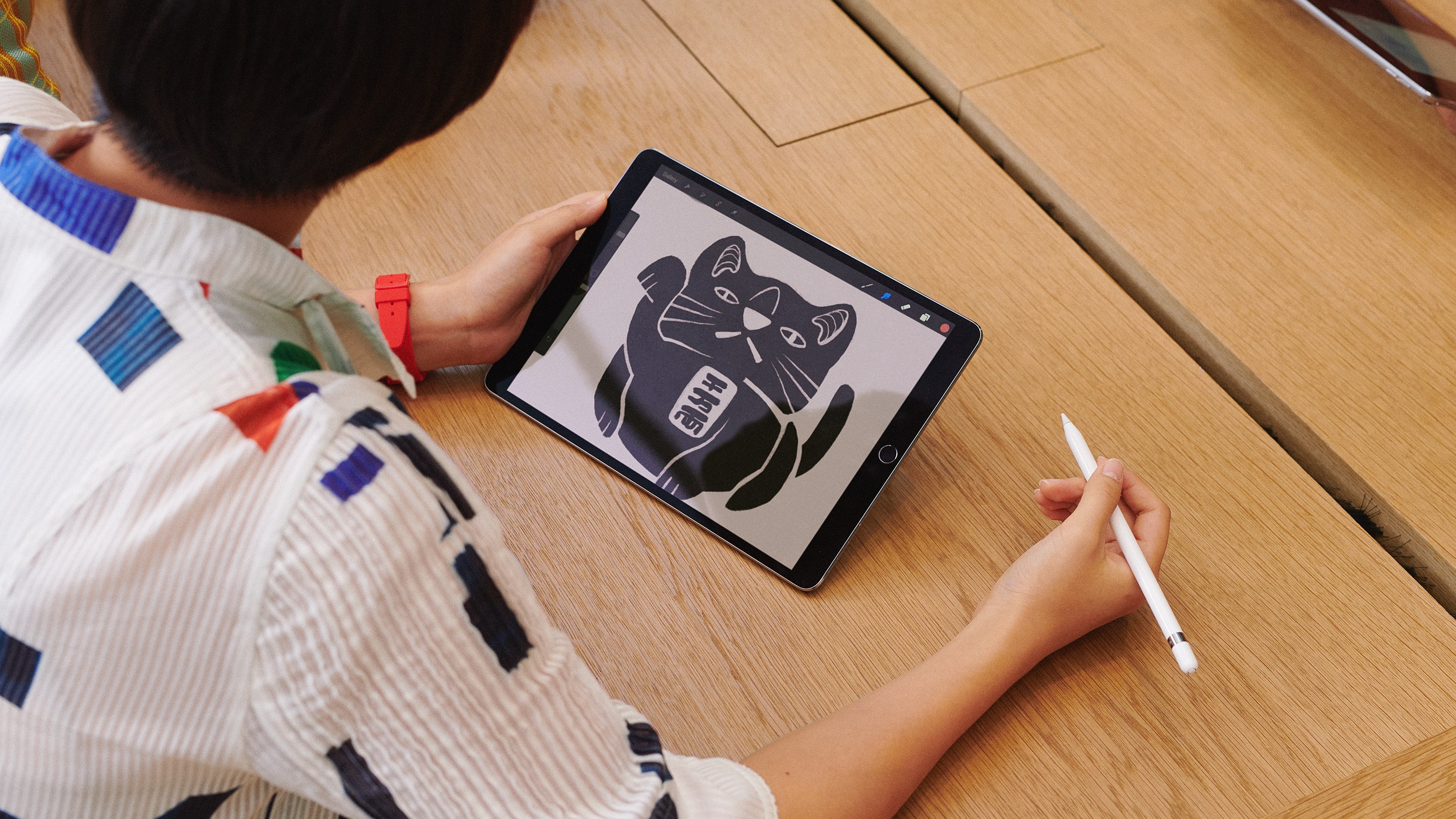 An early example of the new creative sessions began with a workshop by graphic designer Ryu Mieno held during the store’s press preview. Mieno demonstrated the art of Kanji lettering and displayed some of his own past projects. Apple stores across Japan are also holding illustration sessions where participants will learn how to create their own traditional mon emblems using an iPad Pro, Apple Pencil, and the Procreate app. 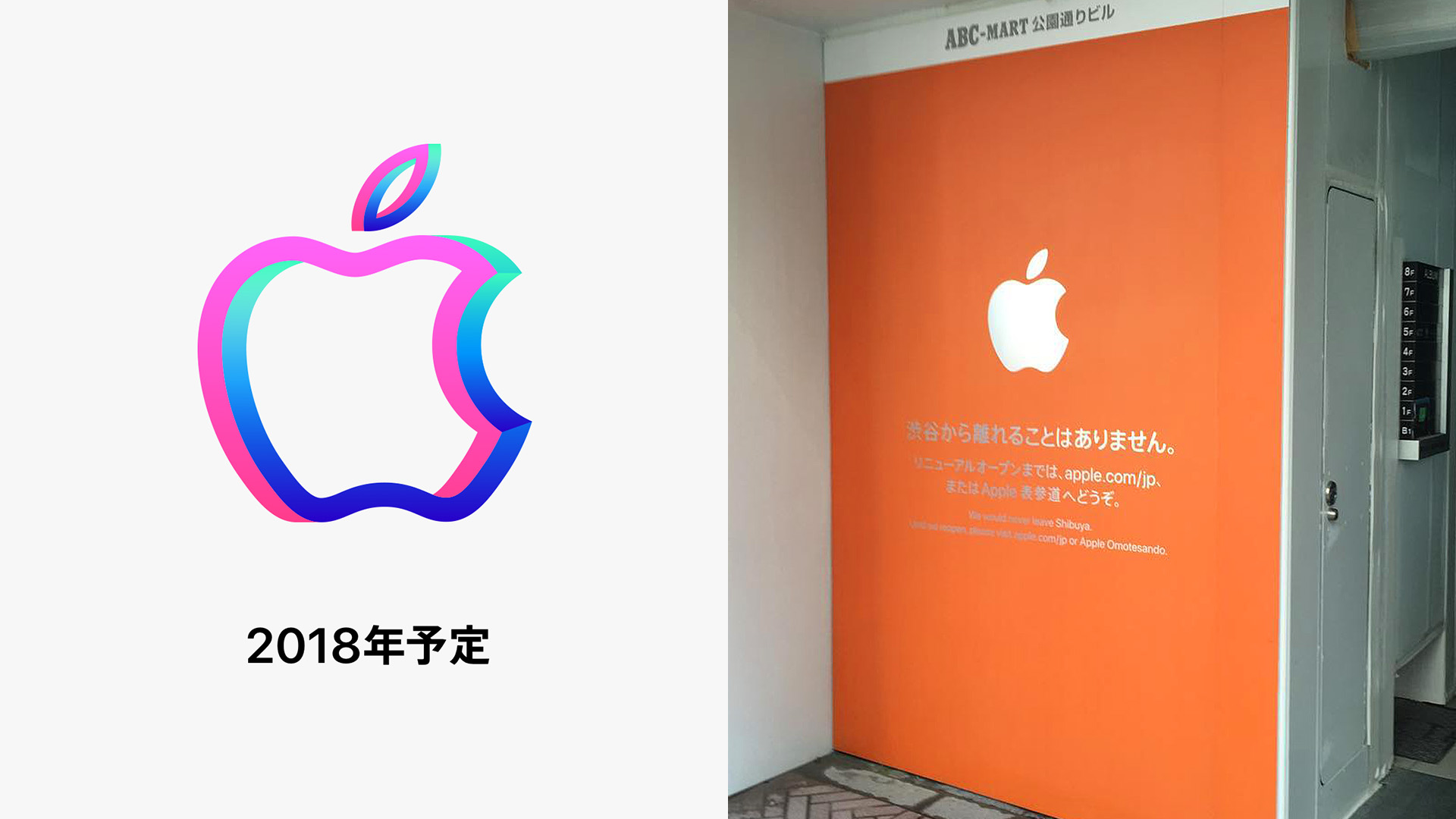 While residents of Kyoto will enjoy their new store long after its opening day in the sun, Apple is quietly preparing for what’s next. At least one more new store has been promised for Japan before the end of 2018. Apple’s expansion in Japan is rapid and aggressive, considering that the company has only opened six completely new locations worldwide across the first 8 months of the year. 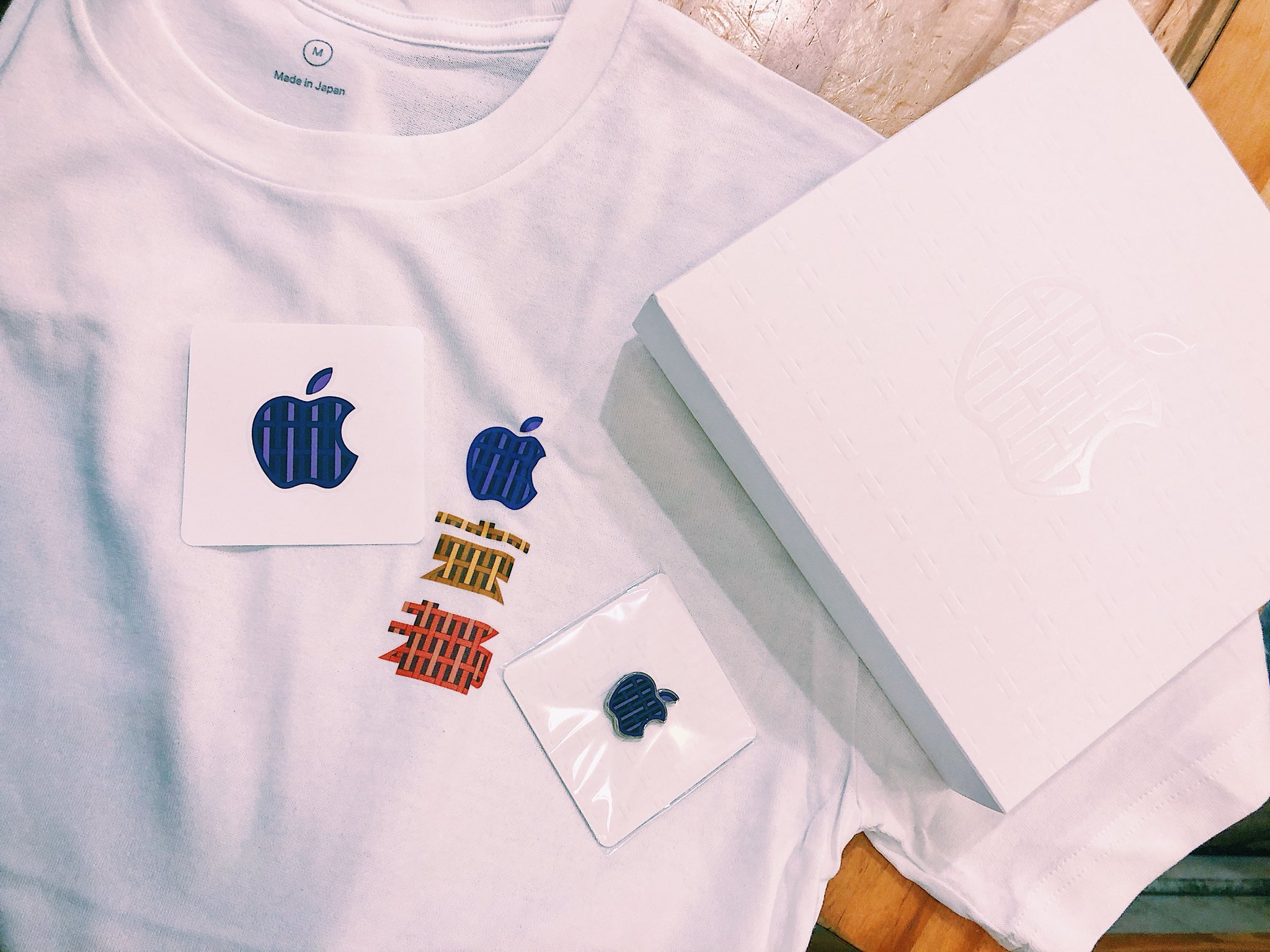 Japan’s first new store this year opened in April in Shinjuku, replacing the world’s last dedicated Apple Watch shop. Like in Kyoto, its opening was promoted with locally relevant imagery and signage, a commemorative t-shirt, and enamel pin. It’s expected that Apple will follow a similar pattern for its third store.

Final construction work is also occurring at Apple Shibuya, Japan’s first “classic” store to receive a remodel. Closed since November 25th of last year, a grand reopening timed with the 15th anniversary of Apple Ginza on November 30th could be a fitting gesture.

Japan is a special place for me, and for Apple. Home to our first international store (Ginza), my first opening at Apple (Omotesando), and now we’re honored to kick off a major retail expansion with several new stores in the coming years. https://t.co/z6ySlEXN4s pic.twitter.com/XBaujwFxhu

Outside of the United States and China, Japan is becoming Apple’s fastest growing market for town square-format stores under the guidance of SVP Angela Ahrendts. The strategy has proved popular where implemented, although the company faces continual resistance from governing bodies and concerned citizens about upcoming projects. As the old guard of traditional retailers rapidly loses ground to online shopping, Apple continues to eschew common sales practices, instead leaning into the store experience. More than the buildings themselves, Apple’s teams now promote the opportunities available to customers in-store, saying they’re most excited about what people will learn and create. Apple Kyoto joins Japan’s 8 existing stores as a template for the future.

Follow along with our retail guide for more store news, and feel free to share your photos with us if you attend a store grand opening.