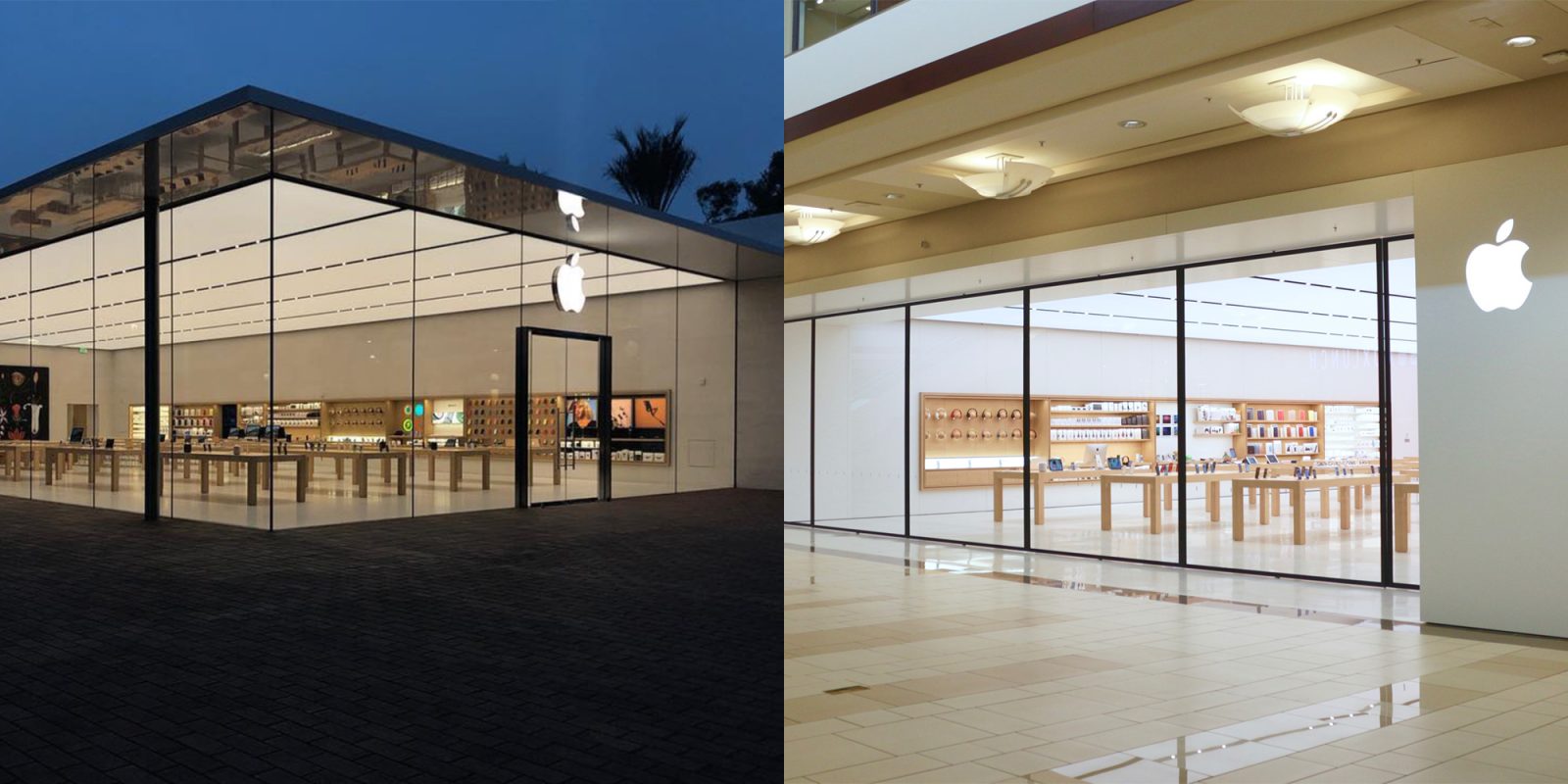 Apple Irvine Spectrum Center’s dramatic transformation marks the first physical move for the store since opening in February 2006. Located southeast of Los Angeles, the Irvine Spectrum Center is an outdoor mall noted for its prominent Andalusian architecture, palm trees, and generous use of fountains. A giant Ferris wheel has been the center’s crown jewel since it was added in 2002.

Until today at 10:00 A.M. local time, Apple’s presence at Irvine Spectrum was confined to a narrow, low key storefront nestled among other shops in the southwest row. Over the past several months, Apple quietly constructed a entirely new and significantly larger building at the center’s southern edge. Inspired by the architecture of other recent stores in Austin, Texas and Alpharetta, Georgia, Irvine Spectrum’s new location is positioned as a community hub. Glass walls, a landscaped plaza, and direct access to a parking lot make it an open gateway to the rest of the shopping center.

Apple’s grand opening coincides with the kickoff of Irvine Spectrum’s Endless Summer Series, an all-weekend festival with live music and free food. The event celebrates all of the center’s new and expanded tenants, including H&M, SoHa Living, and The Denim Lab.

Earlier this year, The Irvine Company announced a $200 million expansion project that made Apple’s move possible. By demolishing and redeveloping a vacant Macy’s location, the center was able to accommodate spaces for 30 new retailers. Apple’s new store will become an anchor at the end of the expansion wing alongside an existing Target store.

I started my career here. Met my wife here. Made some of my deepest friendships here. Said goodbye to Steve Jobs here.

I would not be where I am today without this place.

Goodbye to the original Apple Store, Irvine Spectrum. On to bigger and better things! #R146 pic.twitter.com/DMJ1SLPWTq

Apple Orland Square Mall stands in stark contrast to Irvine’s new store, but will be greatly appreciated by customers and staff just the same. 9to5Mac stopped by the store for the grand opening to see what’s new.

The Orland Square Mall is a more traditional indoor shopping mall located in an affluent Chicago suburb. Apple established its presence at the mall in July 2007. Opening shortly after the launch of the original iPhone, the store didn’t anticipate the enormous success the iPhone and iPad would bring and was quickly outgrown. Until today, Orland Park’s store was one of the smallest remaining locations in the U.S.

In April it was reported that Apple was planning to make an inspired move. A visit to the mall in June backed up the claim, revealing a temporary wall built around a storefront just two doors down from Apple. The space once occupied by Forever 21 was transformed over the course of this summer to accommodate a growing number of customers.

Large glass doors framed in black metal rotate 90 degrees to create an entirely open storefront. Apple’s signature white terrazzo lines the sales floor, made from a mixture of stone chips excavated from a mountain in China. 10,000 individual pebbles were chipped from the floor after its pouring and replaced with more desirable stones. Each $40,000 table was cut from trees grown in a small forest radius in order to ensure consistent wood hues.

Like Irvine Spectrum Center, the Orland Square Mall is in the midst of a transition. After Sears vacated a storefront occupied since the mall’s opening in 1976, plans were announced to fill the space with an AMC Theatre. The mall was also impacted by the bankruptcy of Bon-Ton Stores earlier this year. The exit of Carson Pirie Scott leaves another vacant anchor at Orland Square.

At a time when landmark Apple retail projects like Piazza Liberty in Milan and Cotai Central in Macau have stolen the spotlight, the company is quietly continuing to invest significant resources in its smaller stores. While Apple has insisted that retail is not dying, a shift in strategy from indoor shopping malls to more experiential standalone stores designed with Today at Apple sessions in mind has shown the company’s changing attitudes toward traditional malls.

Global flagship stores may represent the future, but Apple must also continue to maintain the hundreds of “legacy” mall locations that bear the weight of countless Genius Bar visits and educational sessions. Several of these stores have already expanded or moved to standalone buildings this year, designed in partnership with architecture firms Bohlin Cywinski Jackson and Foster+Partners. Many more are currently closed for renovations or under construction. In addition, at least half a dozen stores this summer have received or are currently in process of receiving more modest updates that include a high resolution video wall and a Forum seating area to accommodate the full Today at Apple experience. Retail SVP Angela Ahrendts has explained that her team’s goal is to enrich lives.

Next Saturday, August 25th, Apple will open their first store in the Japanese city of Kyoto. Watch 9to5Mac for coverage of the grand opening, and follow along with our retail guide for more store news.