As Apple prepares to ship its 2018 emoji update with iOS 12.1, work on upcoming emojis slated for 2019 continues. Today, Emojipedia is previewing its current progress with the upcoming emoji 12 revision.

The firm says that this release will focus more on including gender and skin tone combinations, an area in which has become really complex over the past several emoji releases. We’re also seeing new emojis such as a new white heart, kite, sloth, and flamingo.

Apple-proposed accessibility emojis such as wheelchairs, service dogs, and mechanical arms and legs are also said to be released with the upcoming Emoji 12.0 updates, but Emojipedia is quick to note that they’re still in the early stages of developing the emojis and that any previews or mentions are not guaranteed to be released. 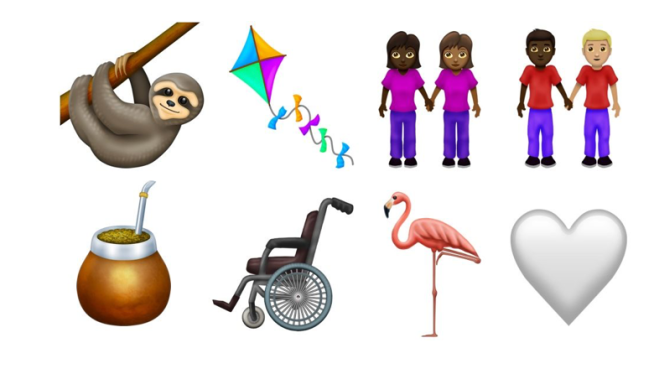 Google has also proposed some ideas regarding skin tone support for the handshake and wrestler emojis, which will be added with this release. Unlike Apple’s proposals, some vendors such as Facebook and Google are already using these updated emojis.

More expansive skin tone support will expand to family emojis as well, which will now have support for black skin tones.

Emoji 12.0 is looking to be finalized by the Unicode Technical Committee in January of 2019, with a scheduled release date of March.

If previous revisions are any indication, Apple will likely roll out support for the new emoji in a point release with iOS 13.