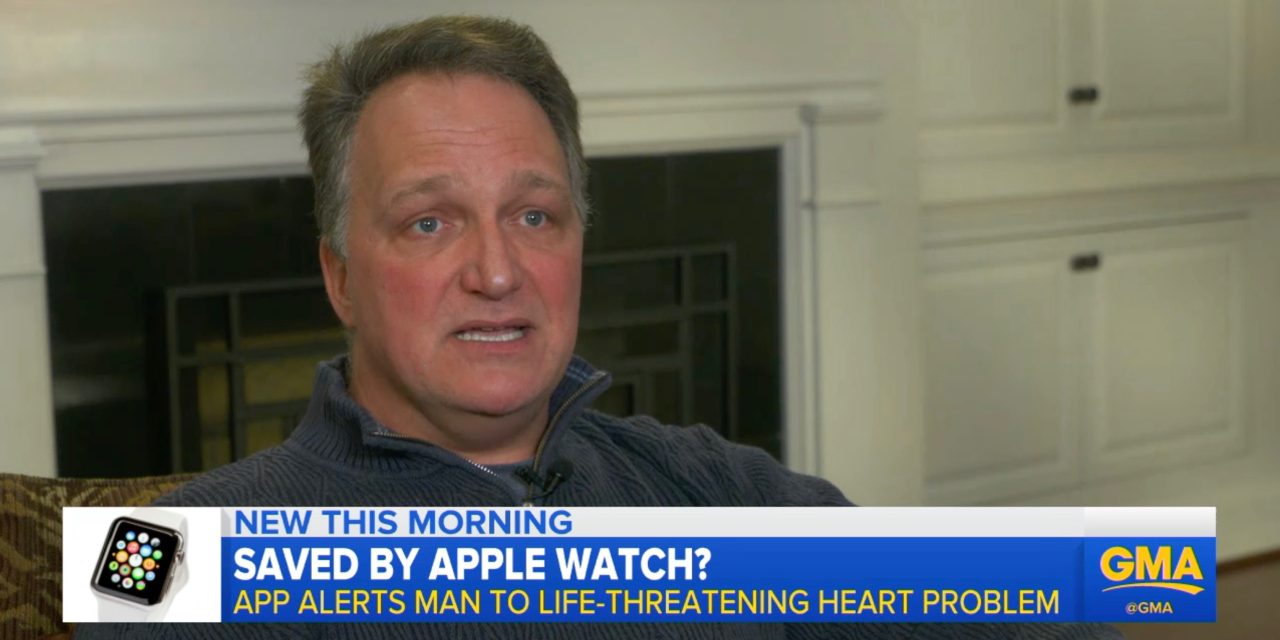 We reported last week about one of the first Apple Watch users who was surprised to find that he had atrial fibrillation (A-fib) after using the new ECG app. Now, that same 46-year-old was featured on ABC’s Good Morning America, sharing more details about how Apple Watch potentially saved his life.

Interestingly, Ed Dentel had some chest pain earlier this year, but received normal results after an electrocardiogram. If it weren’t for his Apple Watch and the warnings from his readings last week, he likely would have had no idea about his heart condition.

Dentel shared a brief summary of his experience with the ECG app on Apple Watch last week. He initially thought it was kicking out false positives for the heart condition A-fib. Here’s how Apple describes atrial fibrillation in its Health and ECG apps:

An AFib result means the heart is beating in an irregular pattern between 50 and 120 BPM. AFib is the most common form of serious arrhythmia, or irregular heart rhythm. If you receive an AFib classification and you have not been diagnosed with AFib, you should talk to your doctor.

In the Good Morning America segment, Dentel shared more about his experience.

“The application on the launch sounded off right away with atrial fibrillation — not something I’ve ever heard of, but since I’m in pretty decent health and never had a problem before, I didn’t give it much thought. I figured something was glitchy, so I set everything down turned in for the night,” Dentel told ABC News.

The next day, he tried again…

On Friday morning, over breakfast with his 7-year old daughter, he put his watch back on.

He decided to see a doctor, but almost didn’t follow through with it due his local clinic being busy.

Dentel drove to a nearby urgent care center. The parking lot was full, the waiting room was crowded, so he almost left, he said.

“I thought, ‘This is silly. I’ve got meetings, I’ve got stuff to do. I don’t have time to sit here and wait,'” he recalled. “But I looked down and checked the watch one more time, and it says ‘AFib.'”

Fortunately, he waited it out and had an electrocardiogram run by the clinic, which may have saved his life.

Checking in, Dentel said he felt like a hypochondriac explaining that his watch told him something was wrong. But he was quickly given an EKG by a technician, who called for a doctor, who said, “Yup, you’re in AFib. This thing may have just saved your life.”

The most powerful part about Dentel’s experience was that he had an electrocardiogram come back with normal results earlier this year after dealing with some chest pain. He likely wouldn’t have had any idea about having A-fib without the Apple Watch ECG app.

“I was dealing with a case of atrial fibrillation that I never knew I had and probably wouldn’t have known anytime soon,” Dentel said. In fact, earlier this year, he’d had chest pain and was diagnosed with heartburn after an EKG produced normal results. “So just as recently as late spring or early summer, everything was ideal and perfect. Sometime after that … it kicked off.”

This seems to speak to how accurate Apple Watch ECGs can be for users, even though it works as a single-lead electrocardiogram.