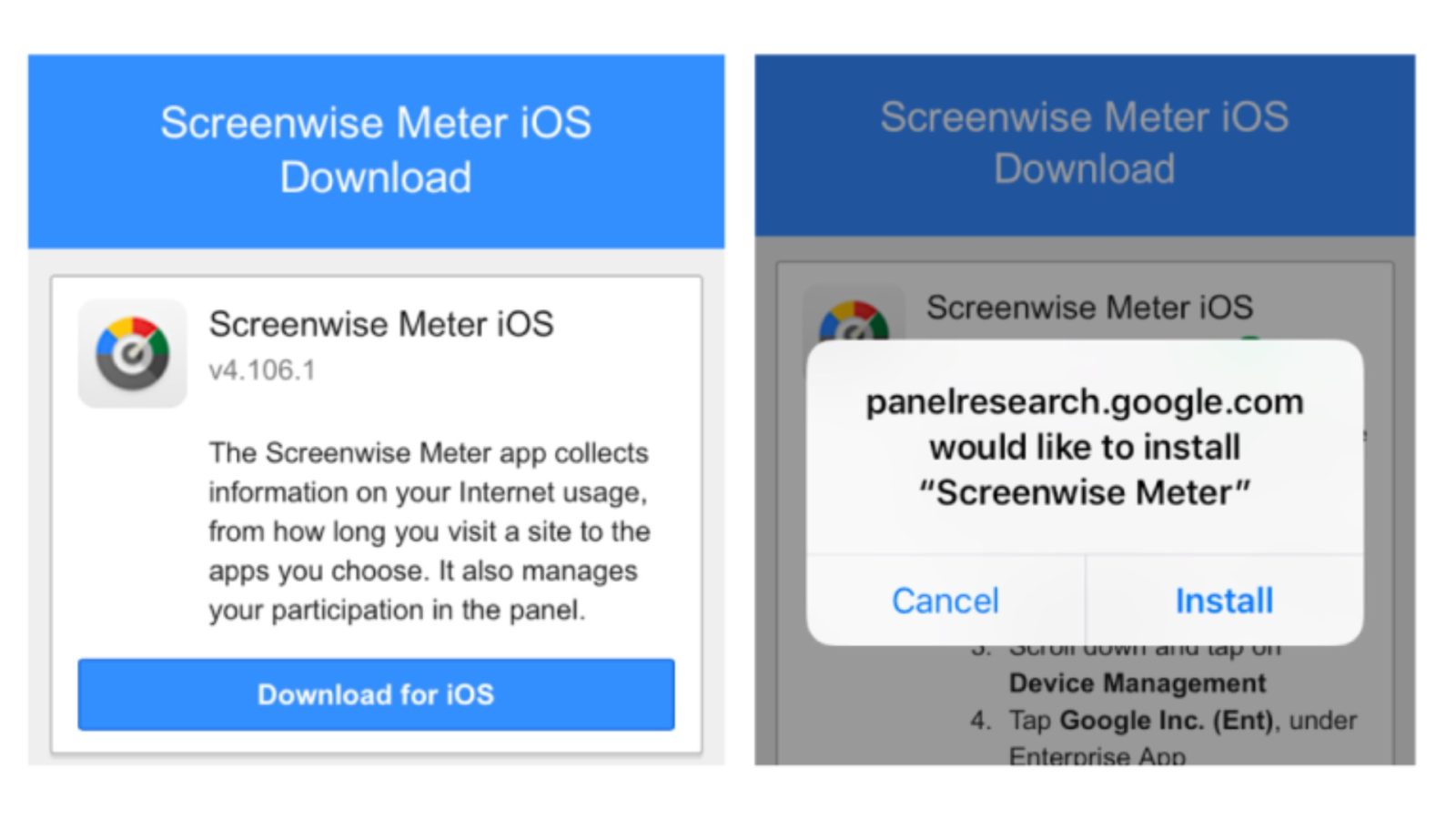 Hot on the heels of Apple blocking Facebook from being able to use its internal iOS apps, Google has also been accused of a similar act, sidestepping the App Store to have users download a certificate to collect user data.

According to a report from TechCrunch, Google has been running an app called Screenwise Meter which is essentially Facebook’s Research app rebranded.

Users ages 18 and up (13 if part of a family group) are invited to download the app, which requires a special code to download. In practice, it’s similar to Facebook Research as it uses an Enterprise Certificate to circumvent the App Store.

Screenwise was originally launched back in 2012 and allowed users to earn gift cards by sideloading an Enterprise Certificate-based VPN app that allows Google to monitor all user data and traffic coming through that specific device.

Apple has yet to pull the app from the iOS App Store, but it’s highly likely that it will get pulled for similar reasons.

However, unlike Facebook, Google is more upfront about it using your data for research. It tells user what it collects, how it’s being used for research, and that Google is directly involved every step of the way. The app had a guest mode option which disabled all tracking.

In related news Facebook is reportedly working on negotiations with Apple in hopes that the company will regain its trust and allow Facebook to continue using its internal apps.

At the time of writing, it’s unclear if Apple will work with Facebook on the matter.

Facebook has had a rollercoaster of a week with it allegedly using a certificate workaround to allow it to spy on some of its user base, including children as young as 13 years of age.

This led Apple to block all internal iOS apps from Facebook as using such a workaround is a breach in the Apple Developer Terms of Service. Apple last year removed Facebook’s Onavo VPN service which had similar intentions: tracking everything a user does on their device.

Do you think Facebook and Google should get a second chance? Let us know with a comment below!

Update: According to a report from Business Insider, Facebook employees are “pissed” and “angry” at the current situation with Apple. Some employees are looking for someone to blame as they’re unable to “communicate with colleagues, access internal information, and even use company transportation.”

Here's Google's statement on Screenwise, an app that monitors how people use their iPhones pic.twitter.com/4Nu9eu8ATM