LG is out today with details on its 2019 TV lineup that will eventually offer users built-in AirPlay 2 and HomeKit integration. Pricing and size info has been revealed with the most affordable 55-inch model starting at $2,499 launching next month.

LG announced back in January that it would release new TVs this year with HomeKit and AirPlay 2 functionality. However, unlike Vizio and Samsung who are bringing Apple integration to 2018 TVs, LG is only offering the new support on 2019 models. That caused a stir and some LG owners even created a petition for the company to launch the features on older TVs.

Today, LG detailed its three TV series to receive HomeKit and AirPlay 2 support with screen sizes from 55- to 77-inches.

Here’s the full breakdown of the 2019 LG OLED TV lineup: 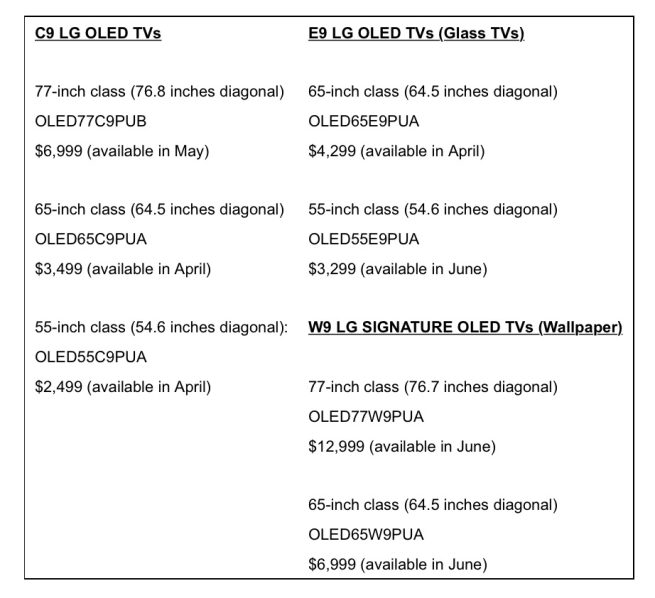 Notably, the models shipping soon likely won’t include the Apple integration out of the box. LG has said that HomeKit and AirPlay 2 support will come in an update later this year. Other features that all of the new TVs share include Dolby Vision and Dolby Atmos support:

If you’re looking for a more affordable price point to get integrated Apple services on your TV, Vizio is said to be bringing AirPlay 2 and HomeKit support to all of its 2016 and later TVs that have SmartCast. That brings a lot of affordable TVs (under $1,000) to the table.

In a slightly different strategy, Samsung will be bringing AirPlay 2 and Apple’s iTunes and Movies apps to its TVs including its 2018 4/5/6/7/8 series and 2019 models.