How Facebook’s feed algorithm works: for the first time, the app shows you 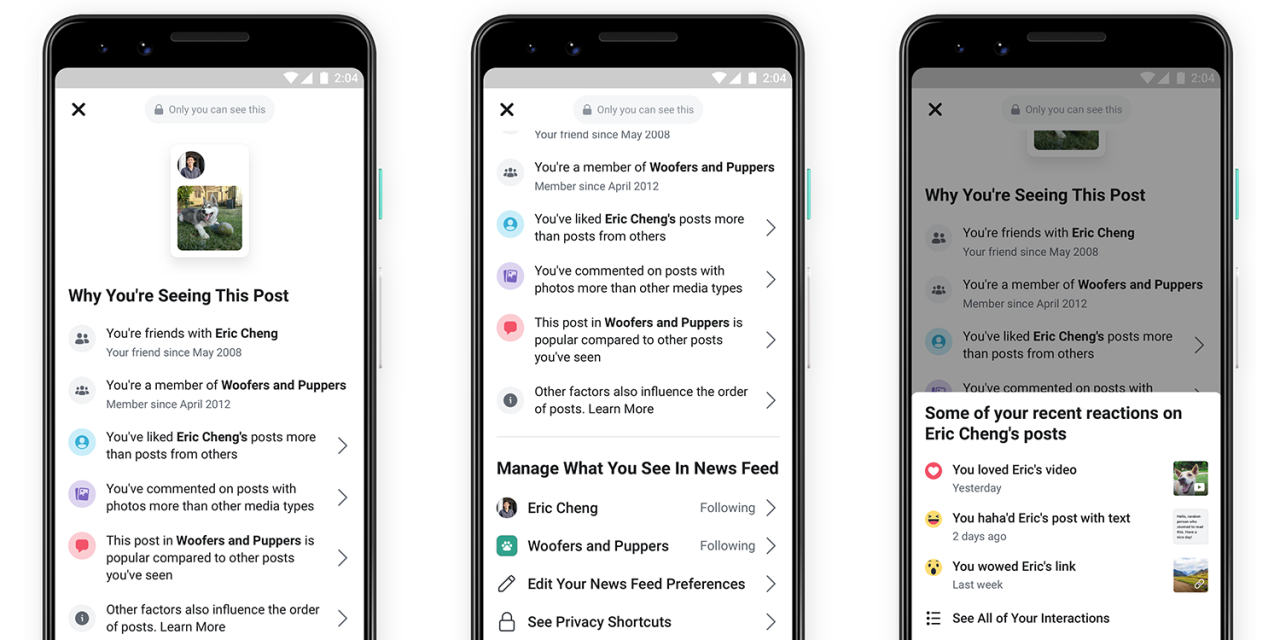 How Facebook’s feed algorithm works has always been something of a mystery. The algorithm determines which posts and ads you see, and which are given more prominence, and has often been a source of frustration for users.

For the first time, however, the Facebook app is letting you see how your own feed works …

The company made the announcement yesterday.

We’re introducing “Why am I seeing this post?” to help you better understand and more easily control what you see from friends, Pages and Groups in your News Feed. This is the first time that we’ve built information on how ranking works directly into the app […]

The goal of News Feed is to show people the posts that are most relevant to them. “Why am I seeing this post?”, which can be found in the drop down menu in the right hand corner of a post, explains how your past interactions impact the ranking of posts in your News Feed. Specifically, you’ll be able to see:

It’s just information – you can’t directly tailor your newsfeed from there – but you do get links to the existing controls, which let you unfollow a person, page or group, as well as decide whose posts you see first. The new feature is available in both iOS and Android apps.

The social network is also improving the related tool for ads, to reveal when an advertiser uploaded your contact details. This is a Facebook feature in which allows companies to upload their customer databases and have Facebook match them to the contact data it holds on you.

Businesses can reach their customers by uploading information they already have, such as emails or phone numbers. We then try to match the ad to the most relevant audience without revealing any identifiable information back to the business. “Why am I seeing this ad?” will now provide details such as when the advertiser uploaded the information or if the advertiser worked with another marketing partner to run the ad.

Sharing how Facebook’s feed algorithm works is just the latest example of the company seeking to tackle some of its problems. It last week banned white nationalism from the platform; started exploring ways to restrict who can broadcast live video; and CEO Mark Zuckerberg supported Apple’s calls for GDPR-like privacy regulation in the US.