Mystery of rainbow stage at center of Apple Park campus is solved, as Jony Ive explains to staff 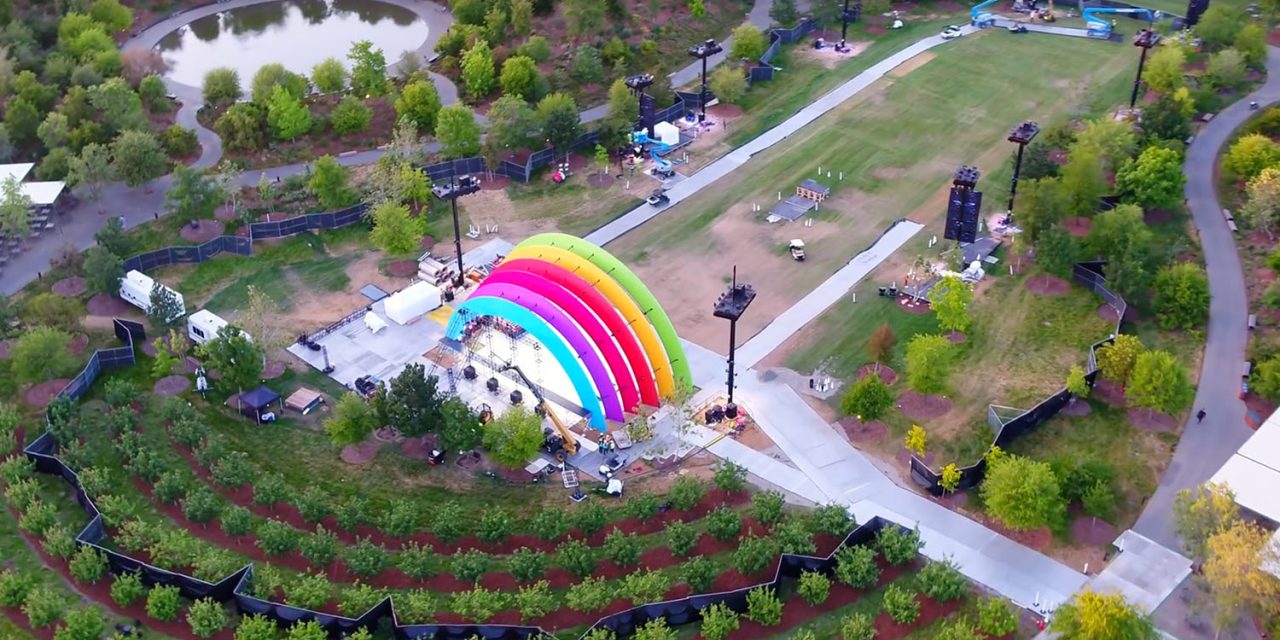 New drone footage of the Apple Park campus created a mystery earlier this week, when it revealed a rainbow stage at the centre of the spaceship ring.

Arranged like a concert stage, it was clearly for an event of some kind – and it turns out it’s for a pretty special one, to be held on May 17 …

Cult of Mac got sight of an article explaining all about it on Apple’s intranet system, AppleWeb. It’s for the official opening of the campus, including a tribute to Steve Jobs – whose vision drove the spaceship design.

If you’ve been to Apple Park lately, you’ve seen it: a rainbow has appeared in the middle of the ring. It’s the latest of Jony Ive’s team’s creations — this time crafted specially for our Apple family and the May 17 special event at Apple Park. The event is both a celebration of the opening of the new campus and a tribute to Steve.

The rainbow stage – known simply as the Apple Stage – was designed by Jony Ive and his team, in collaboration with architects Foster+Partners and designers Gainsbury and Whiting. Construction was by concert staging specialists Tait and structural engineering company Stageco.

The AppleWeb piece has an interview with Ive, in which he explains the twin reasons for the choice of the rainbow design.

Our goal was to create a stage that would become immediately recognizable as the Apple Stage. The idea for the rainbow was one of those rare occasions where the earliest thoughts worked on a number of different fronts.

There is the resonance with the rainbow logo that’s been part of our identity for many years. The rainbow is also a positive and joyful expression of some of our inclusion values and I think that one of the primary reasons the idea resonated so immediately and so profoundly with us was the form — the connection from an aesthetic design point of view. A semi-circle relates so beautifully and naturally to the form of the ring […]

The rainbow’s presence and optimism is keenly felt in many places and at the end of the day — it’s hard to find somebody that doesn’t love a rainbow.”

As you might expect, while the stage may look simple, it’s deceptively complex.

Some 25,000 parts make up the colorful structure and its giant metal skeleton […]

The structure’s aluminum frames include custom curved tops and bottoms individually rolled by a machinist over a 12-day period. Then workers wrapped the segments in a polycarbonate liner “that extends over the edges to create a seamless look once it’s in place,” the AppleWeb articles says […]

The custom processes employed make the brilliantly colored pieces extremely fragile, though. Since they couldn’t touch the ground or lay flat after fabrication, Apple needed to create custom carts to transport them. “It’s exactly like moving glass.”

The Apple Stage will be dismantled after the event, but is designed for re-use, so will likely make future appearances at Apple’s Beer Bash events.