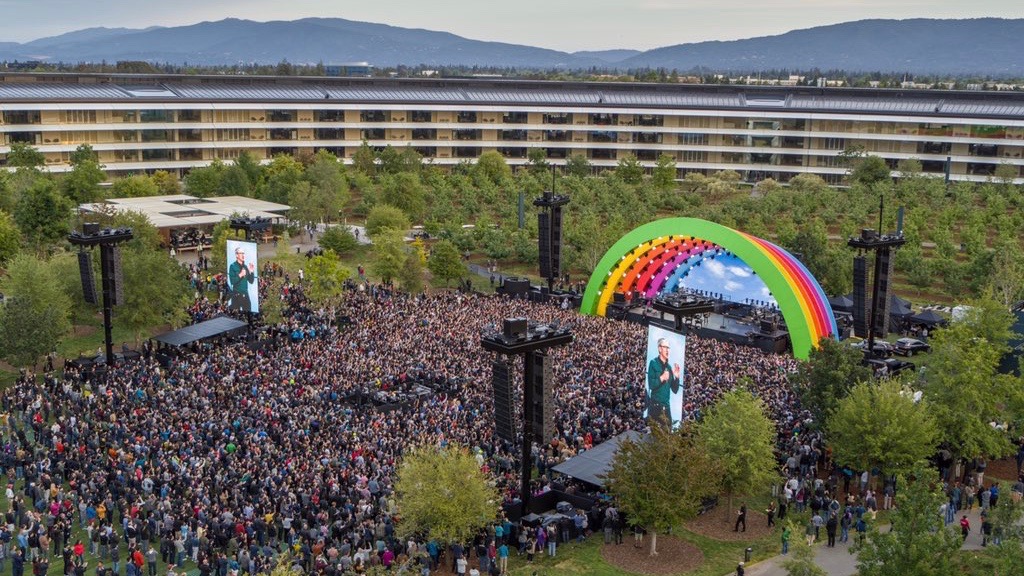 Apple yesterday held its formal opening of Apple Park, including a concert on the rainbow stage at the center of the campus. Lady Gaga performed at the event, with Apple Park employees taking to Twitter and Instagram to share photos and videos.

A drone video of Apple Park last week showed the mysterious rainbow stage at the center of the Apple Park spaceship ring. The stage was eventually confirmed to have been designed by Jony Ive, with the executive explaining his motivation in a post on Apple’s intranet. The event was described as a “celebration” of Apple Park’s official opening and a tribute to Steve Jobs:

It’s the latest of Jony Ive’s team’s creations — this time crafted specially for our Apple family and the May 17 special event at Apple Park. The event is both a celebration of the opening of the new campus and a tribute to Steve.

The colors are reminiscent of the original Apple logo, with Apple expanding the rainbow design this week to various different parts of Apple Park, including stairs, cafe cups, and more.

Tim Cook took to Twitter to express his love for Steve Jobs. He thanked Lady Gaga for her performance in a separate tweet. “We came together today, in the home you imagined for us, and celebrated your spirit. We love you, Steve,” Cook wrote.

Lady Gaga fan blog LGN has posted a detailed recap of the event, including the artist calling on Apple to create a “Be Kind” emoji and dedicating her performance of “Million Reasons” to Steve Jobs. She also thanked Zane Lowe for his support on Apple Music and beyond:

I’d also like to say thanks to Zane Lowe, because you know, he’s always really encouraged me to do whatever I want. So I’m gonna ask you something, I actually think you have to go through a different company and you guys have to approve it. But I would like, if you know anybody, an emoji that says ‘Be Kind.’ So I’m going to get to work on that.

Check out a roundup of images and videos from the event at Apple Park below.

We came together today, in the home you imagined for us, and celebrated your spirit. We love you, Steve. pic.twitter.com/5PccqcBi1c

Thanks to the incomparable @ladygaga for helping make our celebration unforgettable. 🌈🎶 pic.twitter.com/tgBJoBTzxo

What a feeling to experience Lady Gaga at Apple Park! One minute working on radars, the next singing along to Bad Romance. 🎭 pic.twitter.com/X2zd5YMH8R

“Tell me to go fuck myself, Apple!” – Lady Gaga pic.twitter.com/yEuF8rMflr

Lady Gaga is performing everywhere for software developers like me. This literally made my day. Now is the turn of #ApplePark pic.twitter.com/TsmuVczEsZ

A moment of silence for Steve Jobs during Lady Gaga's set at Apple Park! pic.twitter.com/1QCMfM8isP