Even though the all-new Mac Pro won’t be released until later this fall, we’re learning more about the accessories that will be available for the new modular professional desktop. Belkin and Logitech will be among the first third-parties to offer specific Mac Pro products alongside Promise.

Promise just announced two Pegasus modules co-designed with Apple for the new Mac Pro. One is an MPX module that offers up to 32TB of storage and the other is a direct-attach HDD module that will feature up to 8TB of storage. On Apple’s Mac Pro tech specs page, it has also listed some upcoming products from Belkin and Logitech, in addition to some new first-party “Pro” cables.

Belkin will have at least two upcoming Mac Pro specific accessories with the “Lock Adapter for Mac Pro” and the “AUX Power Cable Kit for Mac Pro.” Apple doesn’t list a security slot as a feature on the new Mac Pro or the Pro Display XDR, so this Belkin lock kit could be a popular add-on.

As for the aux power cable kit, it’s unclear what functionality it might offer in addition to being a power cord alternative. Apple’s included power cord for the upcoming desktop is 2m (6.6 feet) so it could come with a longer length as well as extra functionality.

Apple lists Logitech as the maker of a new Mac Pro accessory as well, the “Pro Magnetic Webcam.” This will also likely be a popular offering as the new Pro Display XDR trades a built-in iSight camera for smaller, symmetrical bezels. While Logitech offers a range of external webcams, it doesn’t currently sell anything with a magnetic attachment design, so this will likely be custom for Apple and pair nicely with the aesthetic of the new Mac Pro and Pro Display XDR. That means it may be priced above its $200 high-end 4K Brio webcam. 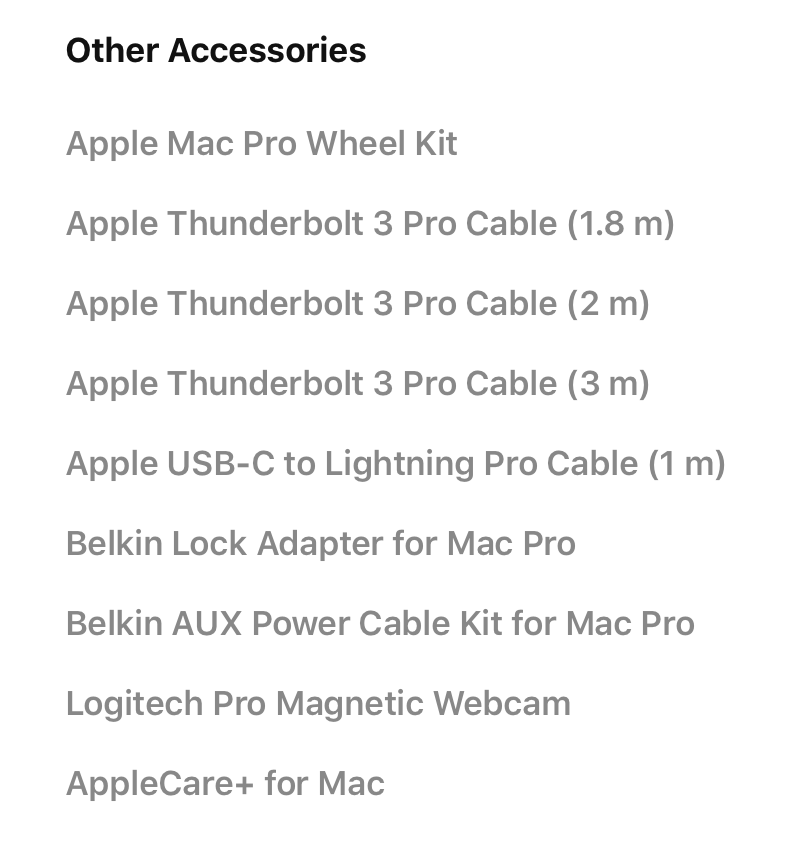 Apple hasn’t shared exactly what will separate the new Pro cables and its stand ones, but they will likely be more durable and be designed to handle more intense workflows that create more heat.

Apple notes the Mac Pro Wheel Kit as another accessory but hasn’t shared a price for that add-on. The Mac Pro does come with a Magic Keyboard with Numeric Keypad and a Magic Mouse 2 as well as a USB-C to Lightning cable, and 2m power cord.

All of these accessories will join the optional Pro Display XDR stand and VESA Mount Adapter, which will sell for $999 and $199, respectively.