Apple starts to roll out support to play 100,000 radio stations with Siri on iPhone and HomePod 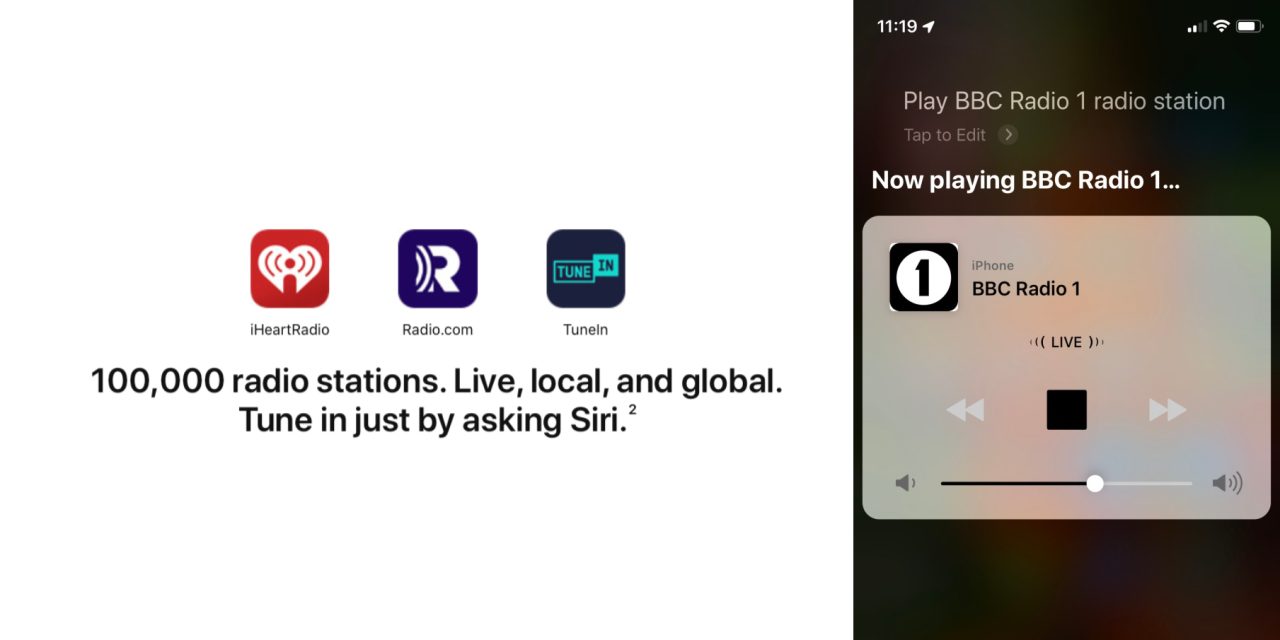 As announced at WWDC, Apple is bringing live radio stations from several online providers for Siri users on iPhone, iPad and HomePod. Although marketed as a fall iOS 13 feature, Siri live radio is already partly working on the HomePod, and for iPhones and iPads running the iOS 13 beta.

Apple said that it will be sourcing from TuneIn, iHeartRadio and Radio.com — touting a total figure above 100,00 stations. This should mean there is a decent selection of top stations available to play. It’s not clear if all integrations are live yet but many stations are now accessible on the HomePod, running the existing OS.

Macerkopf reported that many German stations are also available now through the HomePod, suggesting a global deployment.

For instance, asking my HomePod to “play radio station BBC Radio One” results in the Siri response “Playing BBC Radio One, provided by TuneIn.” and the audio starts playing. You can also start other radio stations just by saying their name.

Obviously, this is finding internet radio streams rather than real terrestrial radio. Nevertheless, audio quality of the stream was very high on the stations we tested, and it sounded great on the HomePod’s speakers.

Siri is a bit picky about the phrasing of your request; without key words like ‘radio station’ in the question, Siri algorithm falls back to Apple Music searches. However, if you are careful to phrase it appropriately, many stations are now available. Of course, Apple could tweak the voice recognition understanding by the ‘official’ fall launch.

In addition to current HomePod OS software, this also works on iOS 13 devices. The radio playback is controllable through the Music app, and you can search for stations by name in the Music app’s search tab. Played stations appear as items in Recently Played section of the Music app, though, if you want to find them again quickly.

(Up to now, Apple Music has offered Beats 1 radio, as well as a limited number of other ‘real’ stations in select countries. You can find these by going to Radio tab in Apple Music and searching the genre list and ignoring the algorithmic stations.)

This fall, the HomePod will receive a handful of software improvements including easier music handoff, just by bringing your phone close to the HomePod, and support for multiple users with each user receiving contextually relevant music recommendations and access their own data for Personal Requests like messages, reminders and calendars. The HomePod will be able to detect up to 6 different voice profiles.